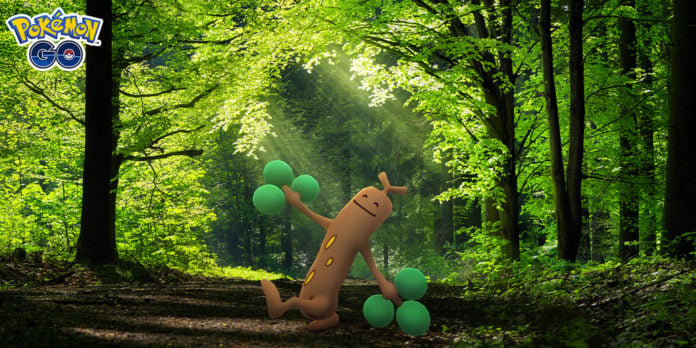 Pokémon GO Tricky Pokémon event is here! Also known as the April Fools event, this special in-game trick festival lasts from April 1st through April 7th and brings Stunfisk into the world of Pokémon GO. Shiny Croagunk is making an appearance and there’s a plethora of tricky Pokémon to catch.

Note: this event is not an April Fools joke, it’s an actual event.

Stunfisk is making it’s Pokémon GO debut during the Tricky Pokémon event! Stunfisk will be available as Field Research task reward encounter during the event, and extremely rarely in the wild.

Stunfisk is an Electric and Ground type that maxes out at 2162 CP, making it ideal for Great League fights. Stunfisk’s move pool is also stunningly good, with Mud Shot as fast move and Mud Bomb and Discharge as charge moves leading the way:

Stunfisk is a natural counter to Registeel, Azumarill, Skarmory, Alolan Marowak and even Haunter! Ahoy, another meta shakeup is coming! The best Stunfisk you can get is a 0/13/14 Stunfisk at level 27, which has 1499 CP.

After the event ends, Stunfisk will no longer hatch from 5km Eggs. You’ll be able to encounter Stunfisk as Field Research task reward encounters or, if you’re very lucky, in the wild.

Shiny Croagunk and Toxicroak are making their Pokémon GO debut as well during this event! We’re not sure how you feel about Toxicroak’s color scheme, but we absolutely adore it. Bring on the teal pink destroyer!

Depending on the task, you might receive a reward encounter with:

The list of specific Field Research tasks and rewards:

The following Pokémon spawns are increased during the event.

Ditto will be appearing more frequently in the wild during the event, so be sure to catch Pokémon that Ditto are known to transform into! We also have reports of Ditto transforming into more Pokémon species than before, and it seems this phenomenon will persist after the event ends.

If you can do one thing and one thing only during this event, catch and max out a Stunfisk for the Great League. Stunfisk will be an absolute beast in PvP and you don’t want to miss out on this opportunity. Judging by early reports from New Zealand, you will have to work for it, but try your best to get one.

Aside from Stunfisk, this is an excellent opportunity to farm up on Croagunk candy and get a strong Toxicroak for Great League as well. Gastly and Haunter spawns are also increased during the event, which is a handy for getting a good Haunter for GL matchups.

As you can see, the majority of Pokémon we’re mentioning here are PvP focused – this is something we all need to get used to, at least until the COVID-19 health situation settles down.

For shiny hunters, the 5km egg pool and increased spawns should offer enough excitement throughout this week long event.