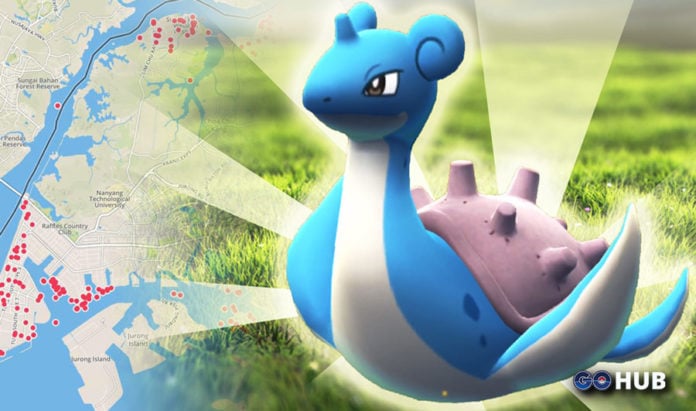 Lapras is one of the rarest, if not the rarest, top tier Pokemon in the game. It’s also top tier defender and attacker.

Recently, we managed to discover it’s true biome, mostly thanks to fellow Trainers across the globe. If you are not aware, a biome is an area where you are most likely to find a Pokemon, in this case Lapras.

We’ll kick this off with a short version and dive deeper into analysis in the rest of the article:

We are certain we have successfully identified the biome in which Lapras spawns – the uncommon Water + Electric biome. These biomes are not really all that uncommon for big cities, as usually there is a harbour, or a river, or a lake, or oceanside nearby.

The spawn rates on Lapras are still ridiculously low, but after scanning extensively, we were also able to confirm this research.

Here’s a heatmap of our test area for Lapras spawns, usually a Voltorb nest: Multiple players have reported and confirmed these findings in the following locations:

One of the players went even further and created a map depicting all of the Lapras spawns in Singapore in relation to Electric pokemon. As you can see, the results correlate perfectly with what has been already stated: find an Electric biome near the sea and Lapras is eventually going to spawn.