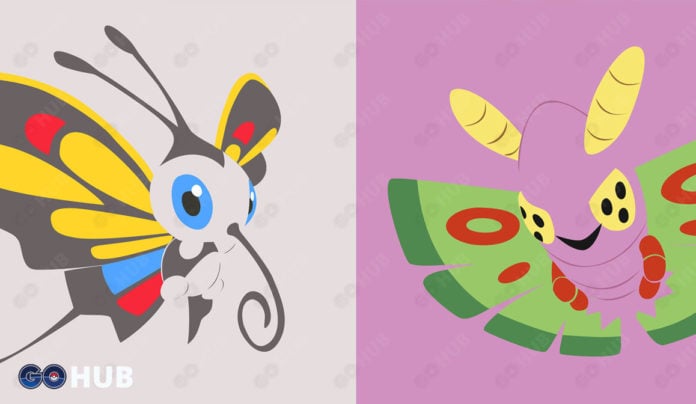 Pokémon GO Wurmple bug has a branched evolution tree. This means that this Pokémon can either evolve into a Silcoon bug then into a Beautifly bug flying , or it can evolve into a Cascoon bug, then Dustox bug poison in Pokémon GO.

This kind of branch evolution is already present in the game when the Second Generation was released. We can compare this branch evolution from that of Eevee. The evolution mechanism of Wurmple is still being researched but there are a few running theories:

Wurmple has a single role to fill in Pokemon GO: mass evolution fodder. Similar to how Weedle and Pidgey were used in Generation 1, Wurmple and Whismur are the 12 Candy evolution line that will be abused for mass evo XP grinds.

In a competitive sense, Wurmple or his family has no place in raids / gyms or any type of PvP.

Pokémon GO Beautifly and Dustox have a pretty similar move pool to choose from, since they both evolve from Wurmple. If you’re looking for a good Beautifly go for Infestation / Bug Buzz, and for Dustox go for Confusion / Sludge Bomb.

They share the following moves and introduce two separate moves per branch:

A normal Wurmple has a red-pink color and yellow-green horn-like appendage on their tail and head. A normal Silcoon has a white hard body, red eyes, and black colored pupil. A normal Cascoon has light purple hard body, red eyes, and white colored pupil. A normal Beautifly has red-pink wing and antenna, the inside of its wings are yellow, blue and red colors. A normal Dustox has green wings and yellow antenna, the outer portion of its wings are lines with orange color, and has red-pink circles on the inside of its wings.

In contrast, a shiny Wurmple has a purple body and yellow horn-like appendage on their tail and head. A shiny Silcoon has a very yellow hard body, bright red eyes. A shiny Cascoon has a green colored hard body. A shiny Beautifly has purple wing and antenna, the inside of its wings is a cream color along with its body. A shiny Dustox has orange wings, the outer portion of its wings are lines with dark brown color.