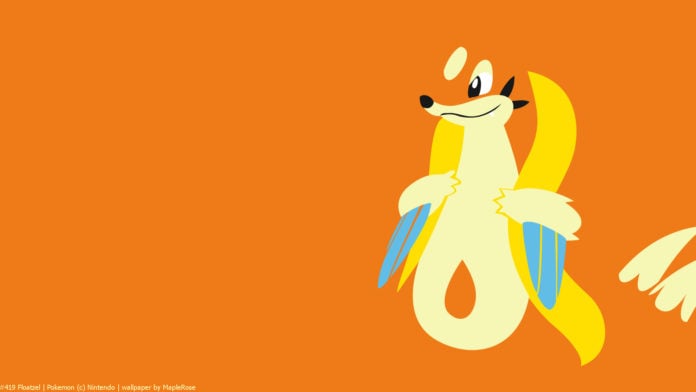 Pokémon GO Floatzel is a pure Water type Pokémon, which evolves from Buizel. The evolution from Buizel to Floatzel costs just 50 candies, as no special requirements (items, etc) are required to evolve Buizel.
Floatzel’s max CP is somewhat of a disappointment: only 2443, with 221 ATK, 114 DEF and 198 STA. Oh dear, we can already tell that poor Floatzel won’t see much use in the meta.

As stated earlier, Floatzel will be underwhelming in battle. Just to prove it, here’s a chart comparing it to other Water types:

Clearly, Floatzel is outclassed in every category by the Pokémon listed above. In and of itself, its stats are not terrible — there are just better stardust investments out there for gym battlers and raiders (namely Kyogre, the king of the seas). Do note that Palkia may not have access to a full Water type moveset, nor is it guaranteed to even get “good” moves, so its place on this roster of top-ranking Water types isn’t certain.

It does has a higher attack stat than Vaporeon, but is far glassier and will have a lower overall TDO (Total Damage Output). Even so, if Buizel is common in your biome, Floatzel may be a discount option for new or lower level players to use in raids or gym battles.

Floatzel’s type coverage regarding its movepool is poor, and therefore it’s nothing particularly special in PVP.

Floatzel’s Water type moves will deal super-effective damage to future legendary bosses Terrakion and Landorus, as well as the previously introduced Regirock, Heatran, Moltres, Entei, Ho-Oh, and Groudon if they ever make a comeback.

Now this is purely speculation, but Floatzel has the potential to make an appearance as a tier 2 or 3 Raid Boss; it’s usable, won’t break the meta if people have easy access to it, and is comparable to other Pokémon who have been given the raid spotlight such as Starmie and Sharpedo.

The following chart will help you visualize what weather conditions are helpful or harmful when battling or raiding with Floatzel.

Floatzel, like Buizel, is also called the “Sea Weasel Pokémon.”