IV – we have all heard of them. We all know how they affect battles in raids, what makes a good ‘IV’ Pokémon and so on… don’t we? Well, no actually, not everyone does. There will always be new players that aren’t familiar with some of the bread and butter concepts that “everyone” knows all about. At Go Hub we want to break down some of these hidden gameplay mechanics to make them more accessible to everyone because we all want to be the best. So lets get started…

Ok, so right at the beginning ‘IV’ means Individual Value.

Not all Pokémon of the same species are the same. Take these Armored Mewtwo for example, they all look the same, they were all caught in a raid, none of them have been powered up in any way but something about them is different from each other to make their CP (Combat Power) different. 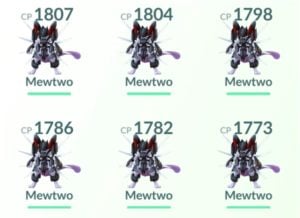 So, now we know what IV stands for but what does it mean? Every Pokémon has Base Values and Individual Values.

Base values are common to every member of that species, so for example all Scyther start with the same base stats and it is their individual stats that make one “better” than another. In Pokémon Go, stats are

Lets look at two of these Armored Mewtwo a little closer… 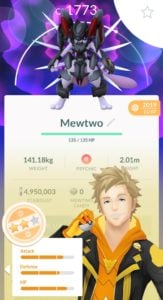 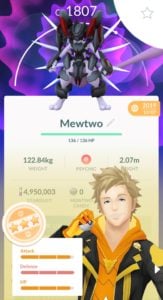 You see those bars? That is where you learn the IV of each Pokémon you have. Each Pokémon has the potential to have an additional 15 attack points, defense points and HP on top of the base stats for this species and how far along the bar indicates how many extra individual points this Pokémon has.

The base stats for Armored Mewtwo are as follows:

So every Armored Mewtwo starts with the stats above and the IV adds on top. So my ‘better’ Mewtwo has 14/15/14 (a shorthand way of expressing your IV values 14 attack, 15 defense and 14 HP) so in combination with base stats it has the following stats –

And my ‘weaker’ Mewtwo has:

So although just looking at the IV in isolation one is clearly ‘better’ than another, when compared including the base stats they are actually much closer than you might first think. Each IV point is roughly worth 2% (2.22% to be exact) so one Mewtwo you might hear be described as a 96% and the other as 80%. (Something we are not going to cover here is the formula Pokémon Go uses to take all of those stats and calculate the Pokémons CP, if you want to read more about this, knock yourself out, link at the bottom of this article)

So, the next part of the equation when thinking about IV and what to keep and what to trash is, how much difference do IV’s make in battle?

I am not covering IV’s and Trainer Battles in this article, this is purely for raids 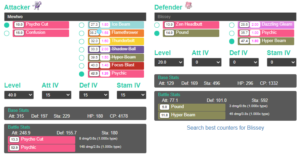 In the exact same scenario but with 0% IV, Mewtwo beats Blissey in 28.1 seconds.

Barely noticeable. Why? The base stats make the difference. Mewtwo is one of the strongest attackers in the game even with ‘poor’ IV’s.

In a raid with multiple trainers using effective counters, IV’s will make only a very small difference to the overall result. When considering IV’s in relation to your Pokémon and comparing one species against another bear in mind that they all have different stats to start with, a hundo (slang for 100%) Flareon is not the same as a hundo Entei even though they are both Fire-type. Just looking at attack in isolation, a +15 attack IV Latios will have a final attack stat of 283, which is approx 11% weaker than even a Mewtwo with +0 attack.

When considering counters for raids it is more complex than just IV, it can come down to typing, the moveset, the weather…. don’t sweat the difference of a couple of IV points here or there, it doesn’t matter when considered in the bigger picture as some of the other factors.

For an idea of strongest Pokémon by type use this link (Pokémon GO Database (by GO Hub) (Pokémongohub.net)) to go to the Pokémon Go Hub database.

What Pokémon should I keep and which should I send to the Professor?

The short answer is, that is up to you.

Everyone plays the game different and sets their own standards of IV’s that they determine is acceptable to keep. As an example I keep 6 of each legendary and as I raid more I ditch the lowest IV and keep the 6 strongest I have, they could all be perfect or they could all be low, depends how lucky I get in raids!

Can I change a Pokémons IV?

Only through trading it to someone else, and it can go up or down, a perfect IV for you will be different for someone else. A Pokémon can only be traded once.

If you are good friends the minimum IV on each stat is +1, great is +2, ultra is +3 and best is +5 and lucky friends is +12 (Source Trading for IVs and Lucky Pokémon | Pokémon GO Wiki – GamePress)

Shadow Pokémon receive a 20% boost to their attack stats and a 20% decrease to their defense stats. Purifying a Pokémon adds +2 to its attack, defense and HP IV

I hope you have found this article informative. IV’s are important to an extent and in some circumstances but they are not the be all and end all – a 0% IV can still be useful, a Pokémon does not have to be 100% before it is ‘worth’ something. As with so many parts of the game it is all down to you. What part of Pokémon Go confuses you or you would like more information on, please let us know!