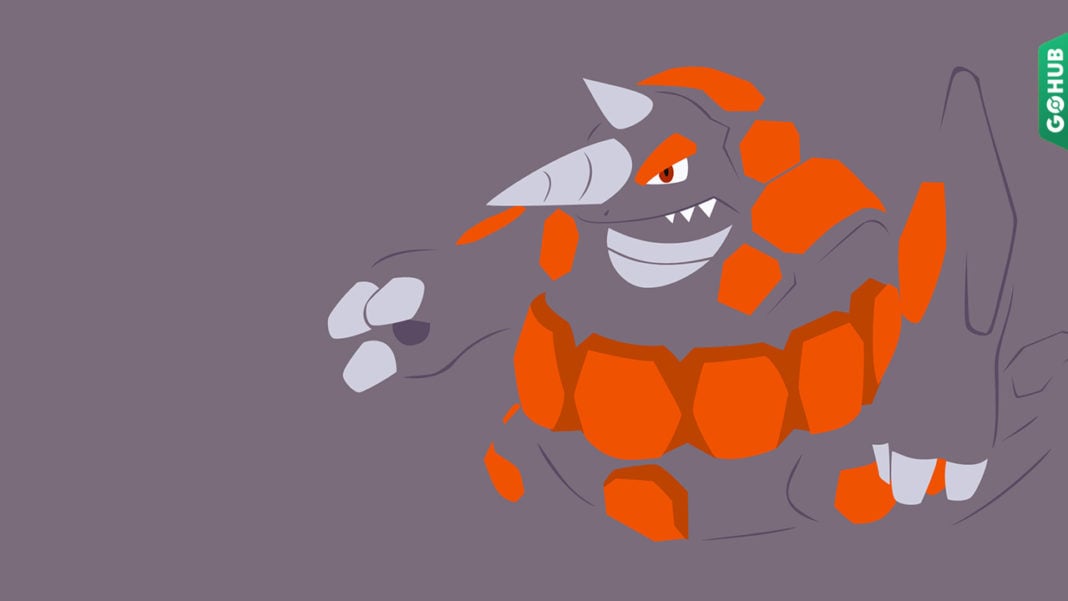 First of all, let’s take a look at the stats of Rock Wrecker.

110 base power for 50 energy looks pretty solid by itself, but it must be said that the move is a bit slow. Is it good though? Yes, overall the move is pretty good, but just not as good as other Community Day moves such as Hydro Cannon or Meteor Mash.

In fact, its stats are very similar to Blast Burn‘s (110 DMG, 3.3s cooldown, 2.75s dmg window). Wanna see how it compares to other top-tier charge moves in Pokémon GO? Don’t worry, we have prepared a table sorted by DPS*DPE where some (not all) of those very good moves are listed for comparison.

Important note! Although DPS*DPE is a very decent metric to rank charge moves, the damage window should also be considered somehow. For those of you wondering what the damage window is, it’s the time elapsed until the charge move connects (and thus the damage is actually applied). If you faint between the moment you press the charge move button and the moment the damage applies, NO damage is actually taken into account. The shorter this time is, the better the move will be! That’s why this variable also matters a lot.

As you can see, Rock Wrecker is very good. It’s an upgrade over Rock Slide and Stone Edge, the best rock type charge moves in the game until now. Although it might feel a bit too slow, the move is pretty decent.

Time to move on to PvP. Let’s see how the PvP stats of Rock Wrecker look like in the following table:

Rock Wrecker is a heavy-hitting charge move (110 BP ain’t no joke!) and one of the most energy-efficient too, which means that the move is very good! 50 energy cost might seem a little steep, but Rock Wrecker is without a doubt one of those moves that you might want to shield even if it does not deal super effective damage against you.

Keep in mind that DPE is not the only metric to consider in PvP (and don’t forget that using some of these moves above will decrease your stats!). If a move is energy-efficient but it takes too long to charge it up, then you might end up losing the game due to fast move damage from the opponent. Although Rock Wrecker is not the spammiest charge move in the game, 50 energy cost ain’t that bad. Furthermore, 110 Base Power will allow it to hit pretty hard when shields are down. Overall, a very good move.

Rock Wrecker Rhyperior in PvE – can it raid?

Now that we know how powerful Rock Wrecker is in Pokémon GO, it’s time to analyse how well Rhyperior can make use of it. The competition is fierce, can Rhyperior live up to the expectations though?

Although Rhyperior can also be used as a very decent ground type Pokémon (with Mud Slap and Earthquake), Rhyperior performs better as a rock type attacker.

Rhyperior’s typing makes it extremely vulnerable to water and grass type moves, and if a raid boss knows a charge move of any of these types, it’s almost game over for Rhyperior, whose performance is hindered significantly. Some examples below:

Rock type moves are super effective against fire, flying, bug and ice type Pokémon. There are plenty of legendary raid bosses weak to rock type moves, which basically means that Rhyperior might be a very useful attacker in raids.

Let’s take a look at some raid battle simulations done in Pokébattler. All credit from the sims below go to Pokébattler. Let’s start with Tornadus, both with and without Grass Knot as its charge move so that you can see the difference it makes: 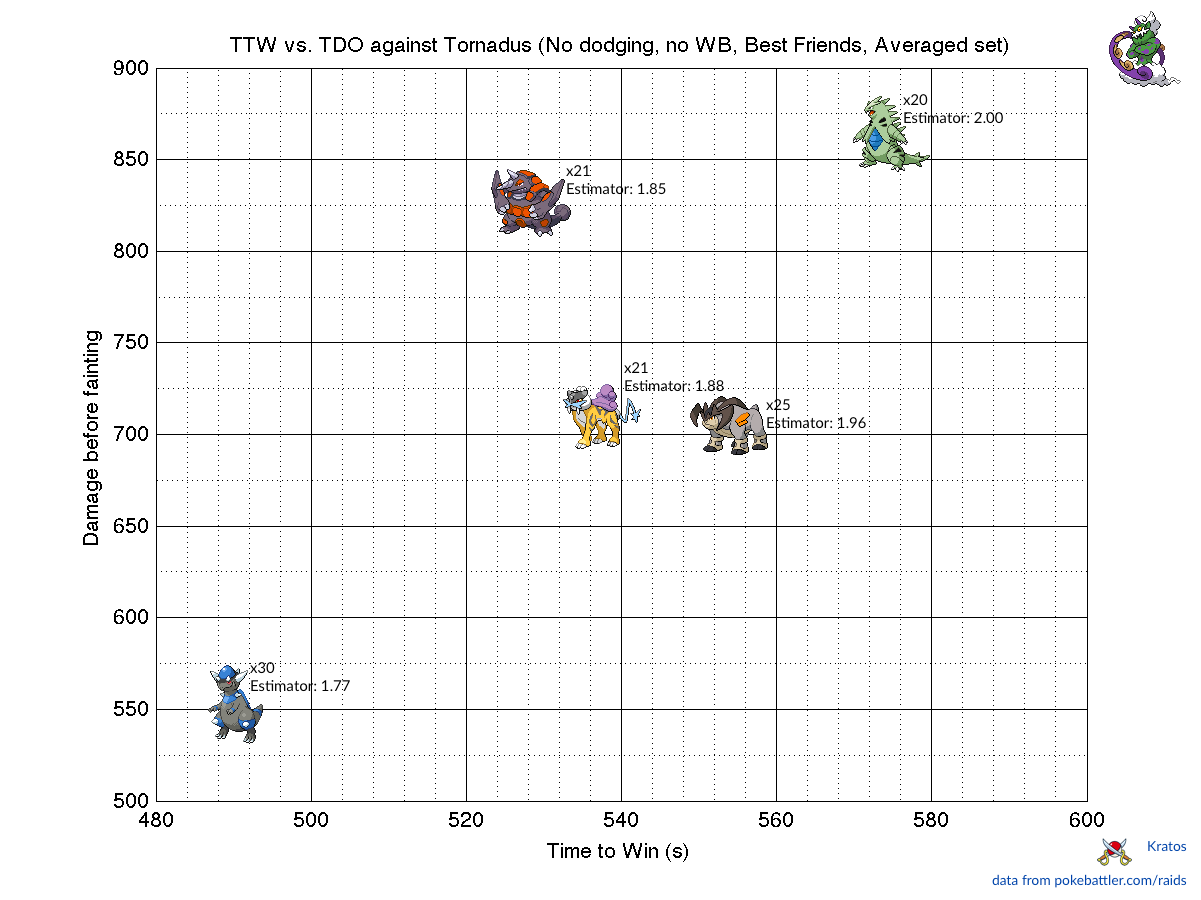 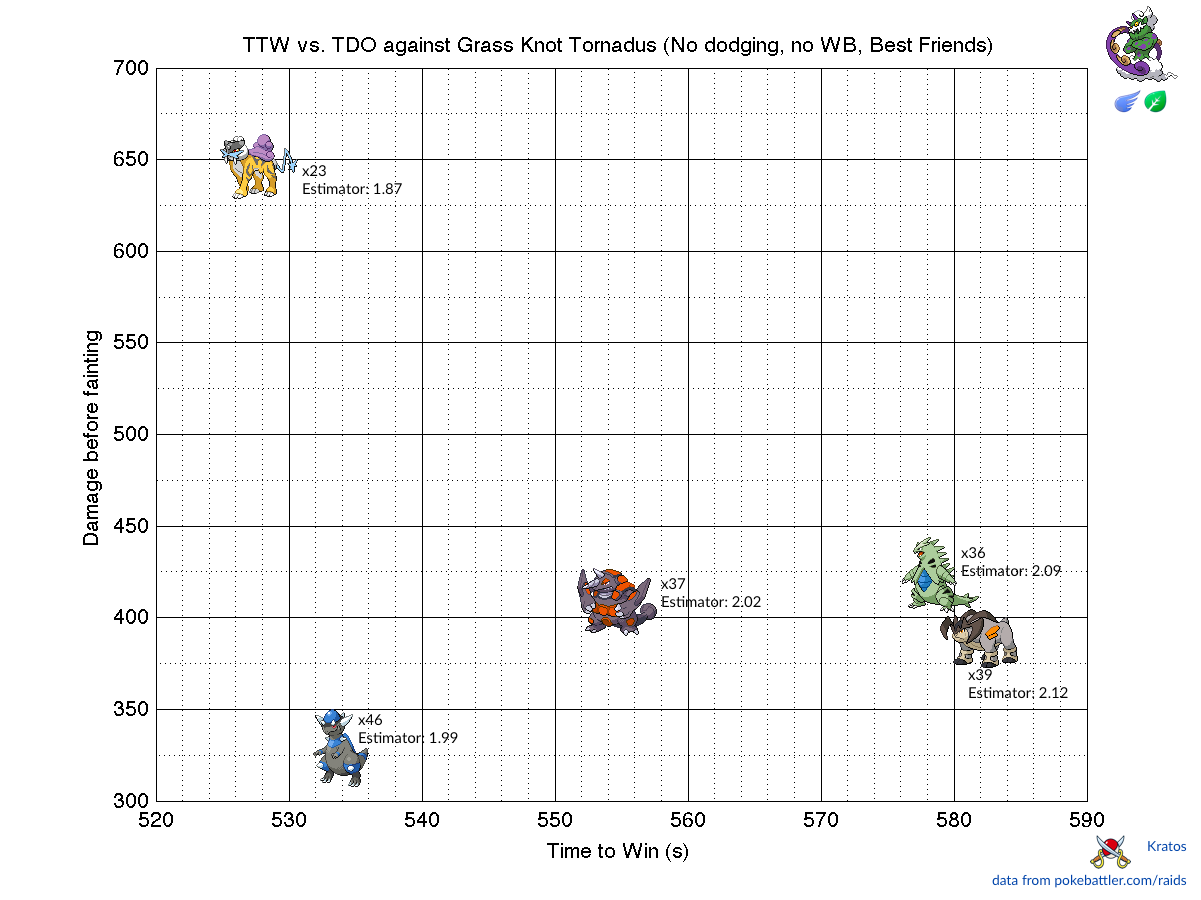 The main focus of the comparison is to see how the rock type attackers compare, that’s why other raid attackers with different typings have not been considered unless they are #1 or perform extremely well against that raid boss.

Several things can be seen in the graphs above. Just take a look at the number of faints if Tornadus has Grass Knot… quite a significant amount for Rhyperior even though it is quite bulky, don’t you think? That’s one of the main drawbacks of using it against raid bosses with water and grass type charge moves in their movepool.

Now, let’s see how they do against Thundurus, which has a diverse movepool (not just electric type moves). The following graph takes into account an averaged moveset: 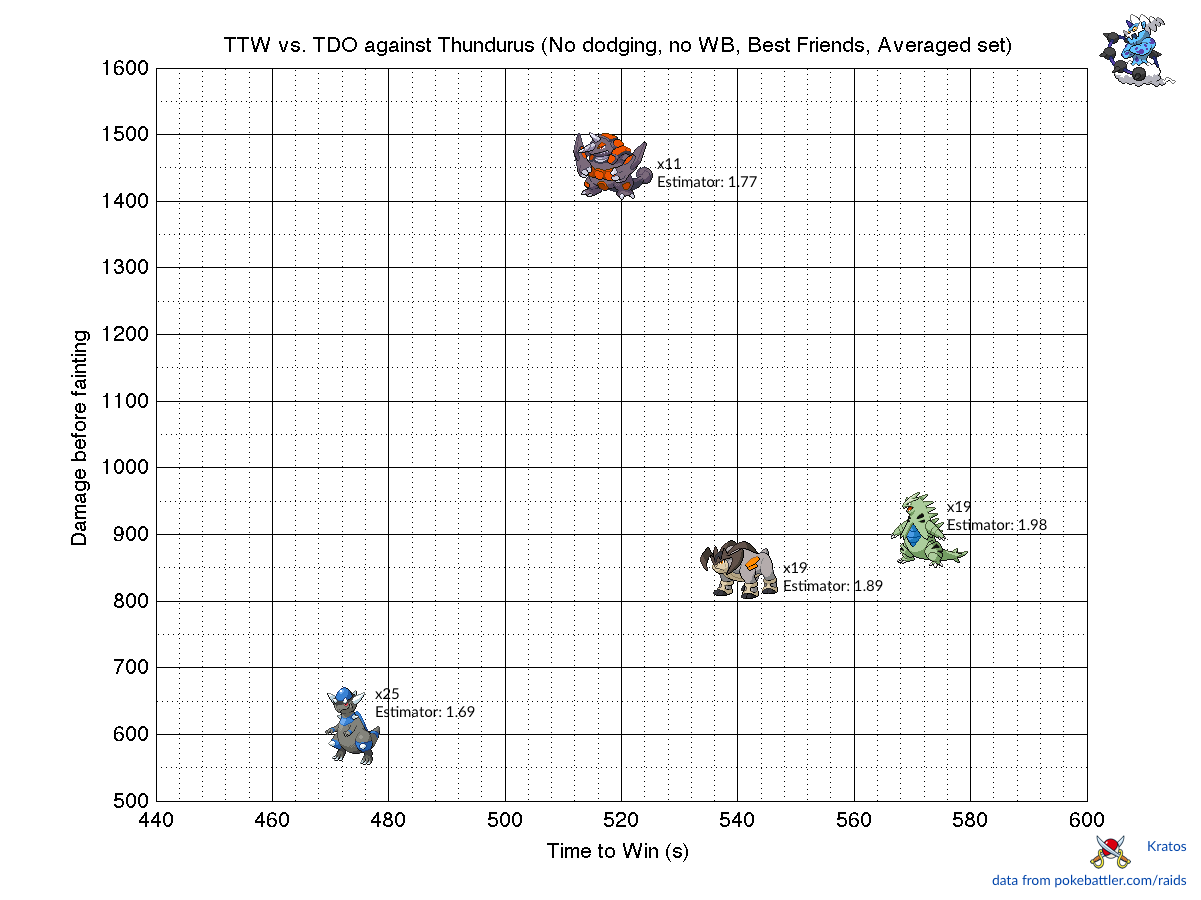 As you can see, Rhyperior offers a great performance with an estimator that is not that far from Rampardos’ and with less than half the amount of faints thanks to its bulk and TDO. Rhyperior will be one of the best counters against Thundurus, period.

But let’s go a bit further. With Reshiram, one of the future fire type kings, in the horizon, we want you to be prepared for what’s to come, and Rhyperior is looking absolutely amazing in this case! In fact, against some movesets it performs as the best (or really, really close to the best) attacker: 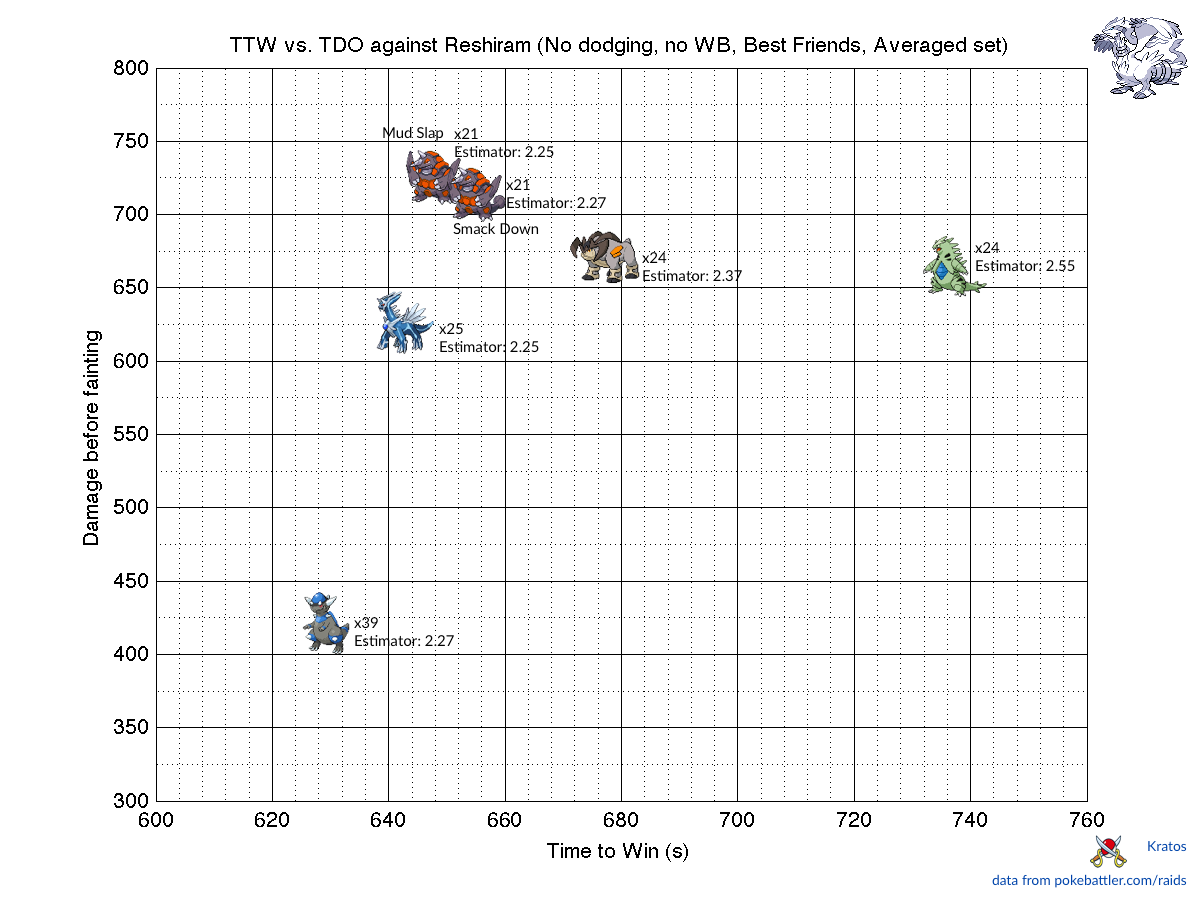 As it can be seen in the graphs above, Rhyperior is an amazing rock type attacker. Rampardos is a beast when it comes to raw damage output, whereas Rhyperior is a bulkier option with less DPS but significantly better bulk and TDO (which means less relobbies and less revives needed).

In a neutral and fair scenario, Rampardos would take the edge mainly due to its massive attack stat (above most legendary Pokémon, in fact!). However, Rhyperior’s bulk would compensate for its lack of DPS (when comparing it to Rampardos) and their performances would not be too far apart, as it can be seen in the graphs.

Finally, let’s see if Rhyperior has any niche uses. As a ground and rock type Pokémon, it has something that Rampardos (and the other top-tier rock type attackers) do not have: an immunity-tier resistance (2xresistance in GO) to electric type moves. And now you’re probably thinking about Zapdos and Thundurus. In fact, vs. Zapdos and Thundurus (with electric type moves), Rhyperior shows an outstanding performance: 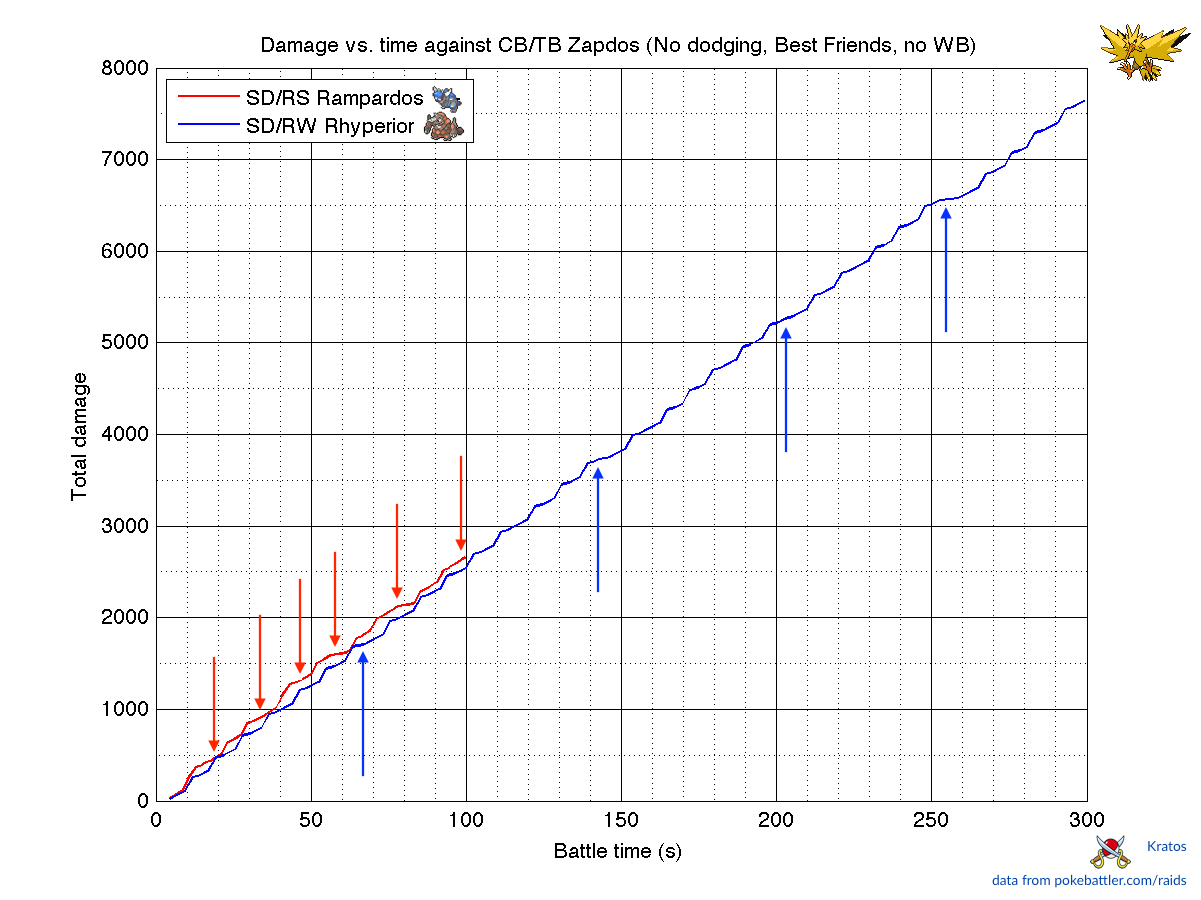 Just take a look at the amount of times Rampardos faints and how long it lasts in battle. With that moveset, Rhyperior can go solo until the 300s timer stops. And in fact, a full team of Rock Wrecker Rhyperior will take out half of Zapdos’ total health (15000HP, Tier 5) without even needing to relobby. TS/TP Thundurus shows a similar output but it must be taken into account that those moves (especially Thunder Shock) do not hit as hard as CB, thus the type advantage from Rhyperior is less noticeable.

Thus, it can be said that Rhyperior ranks #2 in the list of best rock type attackers in the game as of now. Should you invest in a Rock Wrecker Rhyperior? Absolutely! Unless you already have a team of maxed out Rampardos and don’t care about relobbying.

Rock Wrecker Rhyperior in PvP – a force to reckon?

Unfortunately Rhyperior does not have enough bulk to be viable in these two leagues, as its attack stat is too high. Furthermore, there is fierce competition and plenty of meta counters that can absolutely destroy Rhyperior due to its large set of weaknesses.

Things change quite a bit in the Master League, where its bulk can be maximized and you can take full advantage of its potential.

Rhyperior can be used as a counter to plenty of relevant meta defining Pokémon, which makes it part of the meta too. Examples are: Dialga, Melmetal, Heatran and Melmetal.

Why Mud Slap and not Smack Down? Well, if you want to counter the meta threats just listed, you’d appreciate having Mud Slap as your fast move instead of Smack Down. Rock Wrecker is a must and Surf is the chosen 2nd charge move for coverage. Superpower could be a nice alternative depending on your team composition, though.

Let’s go to PvPoke (a wonderful PvP resource!) and run some simulations to see how Rock Wrecker Rhyperior performs. All credit from the sims below goes to PvPoke.

What does Rhyperior win/lose to in a 1-shield scenario? 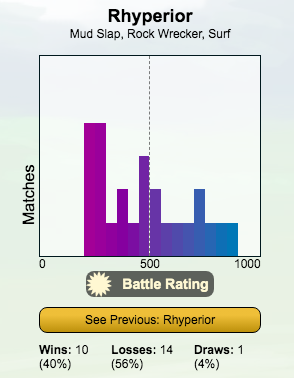 A 40% win rate against the Master League meta subset is not that bad, especially if some of the wins are against some of the best Pokémon in the league.

But what happens if towards the end of the battle you have shield advantage? Due to Rock Wrecker’s massive damage output, the win rate goes up significantly: 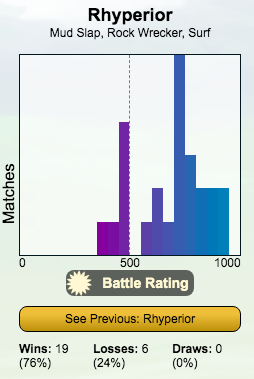 From the losses listed below, the only ones that persist are Pokémon like Swampert, Kyogre, Garchomp, Lugia, Giratina and Machamp. To sum up, terrible matchups. And even then, in some cases having a little bit of extra health than your opponent can flip the matchup! If your opponent does have a Rock Wrecker Rhyperior in the back and shield advantage, you’re probably gonna have a bad time.