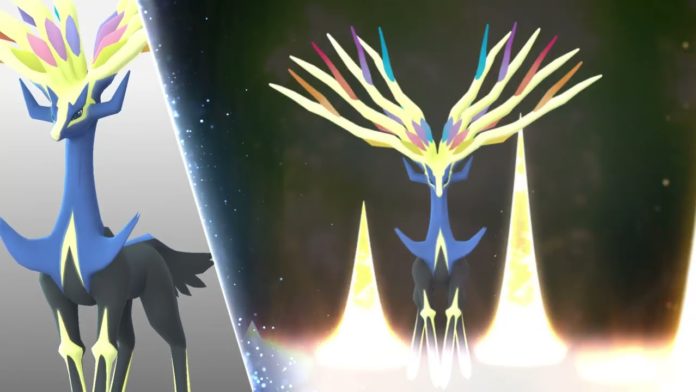 Xerneas is a Tier 5 legendary raid boss in Pokémon Go and is the first Fairy type legendary Pokémon in the game.

Xerneas can be caught with the following CP values:

It has a mono typing of Fairy and as such, it is boosted by Cloudy weather and its counters include strong Steel and Poison type Pokémon such as Metagross, Dialga, Roserade and mega evolutions like Mega Gengar and Mega Beedrill.

As you will soon find out, Xerneas is quite bulky and as such, it would require 5-7 trainers to be on the safe side.

The best counters for Xerneas, based on the time required to win, are the following:

Aw, this is depressing. Niantic has ruined the gorgeous Xerneas with really bad fast moves. Like, really bad!

Tackle is a bad Normal type move that doesn’t deal super-effective damage to any type. The top counter, Mega Gengar, heavily resists Tackle. In fact, Mega Gengar is grinning because it reads ‘Tackle’ as ‘Tickle’. Tch!

Zen Headbutt is again a bad move. However, it deals super-effective damage to Mega Gengar. For Zen Headbutt, Metagross is your go-to Pokémon.

Coming to the charged moves, Moonblast gains STAB and hits quite hard.

Close Combat can take off a chunk of HP from your Steel types. The Poison types are more effective here.

Thunder is kind of difficult to dodge and does quite a number, so be wary of this one.

Megahorn is decent but not too much of a threat.

Giga Impact can do a lot of damage but can be dodged.

Oh! So Xerneas is all about hard-hitting charged moves and underwhelming fast moves. It is bulky and as such, would take a while to be defeated. Otherwise, with numbers on your side, Xerneas can be taken down with relative ease.

We have had many opportunities to get Pokémon like Meteor Mash Metagross, Mega Gengar and Mega Beedrill with free mega energy. So, stacking up your counters to beat Xerneas shouldn’t be too much of a problem. It’s all about having numbers on your side!

Xerneas at the moment is bad. As simple as that. It has the stats but it desperately needs a Fairy type charged move to make an impact on the meta. Do note that Xerneas doesn’t learn Charm in the main series games. So the only way to go would be for Niantic to implement Xerneas’ signature move, Geomancy, as an exclusive fast move.

Only time will tell if Niantic decides to save Xerneas from staying in the dirt. But at the end of the day, it doesn’t hurt to dex this absolutely beautiful legendary Pokémon. Who knows what the future will bring? We have had Pokémon becoming tremendously meta relevant due to a new move in the past.

Till then, stay safe and happy raiding!