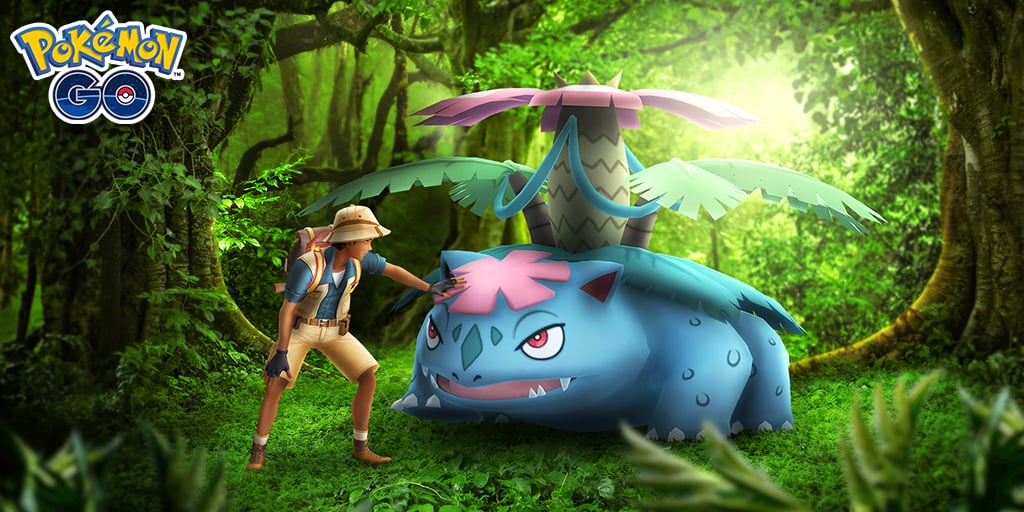 Regarding Dragon Breath/Blast Burn Charizard: TM to Fire Spin if you’re only building one mega for raids, but consider keeping one with DB/BB just in case.

(Even if you already know all these, keep reading for some interesting plots!)

From the perspective of raids, this is huge for many players. New players can use this opportunity to get cheap raid squads for their Grass, Fire and Water teams, thanks to the incredible strength of the CD moves. Even veteran players who never missed a single Community Day can also get the CD moves on their shadow Pokémon, which are top-tier raid attackers.

In this article, I will provide plots of all relevant Grass, Fire and Water raid attackers from level 30 to 50, so that you can see how the CD starters (and their shadows and megas) compare to other Pokémon at different levels. Just like last time, I’ll let pictures do the talk… As you’ll see very soon.

How to get the Community Day moves?

On non-shadow Pokémon: Just evolve a pre-evolution (e.g. Ivysaur) at any time on Saturday or Sunday.

On Shadow Pokémon: TM away Frustration BEFORE evolving!

Also: If you want to use them as raid attackers, DO NOT purify them unless you know what you’re doing!

Note that Gen 6-7 starters (Chesnaught, Delphox, Greninja, Decidueye, Incineroar, Primarina) will NOT learn the CD moves this weekend, as they have not had a Community Day yet. Some of them appear in this post, but only as future predictions.

Don’t know how to read the charts?

If you’re totally lost, just look at the first two plots, or just the first one if you don’t dodge in raids. These two plots are based on my ASE metric, which approximates in-raid performance using Pokebattler. (The DPS3*TDO and DPS plots are for experienced players who want to check these metrics.)

In all four plots, the higher, the better. Example: Mega Venusaur is generally better than Shadow Venusaur, which is better than Tapu Bulu, if they’re all at the same Pokémon level. But everything listed is perfectly usable and will let you pull your weight in raids.

Reminder: All plots show average performance against many raid bosses. Against a specific raid boss, the rankings can be different.

Mega Venusaur is the best Grass attacker now, period, though not by far and can sometimes be challenged by shadow grasses. But prepare for Mega Sceptile, which is much stronger and blows everything out of water.

Shadow Venusaur is usually slightly better than Shadow Torterra, but both are top tier and the difference is small. They generally compete against Shadow Tangrowth and Zarude as top non-mega counters.

Get a good Venusaur and Sceptile for megas. Shadow Venusaur is one of the top grass shadows, though Shadow Torterra is close. If you still need budget grasses, Sceptile is your best bet, but Venusaur and Torterra are also serviceable.

Mega Charizard Y is seriously OP. If you don’t have one with Blast Burn yet, get it now, seriously. Mega Blaziken will be a side-grade that’s just as good when it comes: essentially the same average performance, but different typing means both will still get to shine under different circumstances. (Mega Blaziken has higher DPS too.)

Shadow Charizard is now the best non-legendary shadow. It might not justify the expensive shadow investment, however – it typically falls behind Reshiram and shadow legendaries (Moltres, Entei, Apex Ho-Oh). For most players short on stardust, Reshiram is better, unless rare candy is an even bigger concern.

Blaziken is the best Blast Burn starter by all measures; Emboar is also decent though a bit behind. All BB starters are outclassed by Reshiram, Chandelure, Darmanitan and generally Moltres, but at least they are easy to obtain during this event.

A word on Dragon Breath Charizard

Any Charizard evolved during the weekend will come with the double-legacy moveset Dragon Breath/Blast Burn.

While Dragon Breath is situationally better in PvP (hence the hype), it has limited utility for raids. Yes, you can use a Dragon Breath/Dragon Claw Mega Charizard X, but its own performance is below the long list of dragon attackers, Dragonite included. Its main purpose becomes providing damage boost to other players, but Mega Latios and even Mega Altaria do that better.

If you’re only building a single Mega Charizard, I would recommend TMing away Dragon Breath for Fire Spin. A FS/BB Mega Charizard Y has way more utility than a DB/BB Mega Charizard of any kind in raids (and arguably even in PvP, as Zard Y isn’t exactly a common pick for Mega Master League).

If you can afford to build multiple Mega Charizards, then keeping Dragon Breath/Blast Burn on one of them may be a good idea, in case you want to use it in the occasional Mega Master League, or in case Charizard gets a better dragon-type charged move such as Outrage.

Definitely build a FS/BB Charizard for the OP Mega Y, and prepare a Blaziken for its mega too as a side-grade. Shadow Charizard doesn’t really live up the hype of a shadow, and typically can’t overcome Reshiram, so the shadow investment won’t be for everyone. Regular Blaziken is still a good budget fire type, perhaps the cheapest.

Note: The sims often use Feraligatr (shadow or regular) with Water Gun, which is a legacy move. Non-legacy Waterfall Feraligatr will be slightly worse than shown here.

Mega Blastoise is better than any other Water attacker and sits comfortably ahead of shadows and non-shadows, but the gap is not huge, just like Mega Venusaur. (It’s stronger than Mega Venusaur in raw power, though). Mega Swampert will be a bigger deal when it comes (it even outclasses Shadow Kyogre and Primal Kyogre with Surf!), so definitely be prepared.

Shadow Swampert is amazing and really showcases how much power creep is introduced by shadows. It sits well ahead of Kyogre, as L30 Shadow Swampert generally outperforms L40 Kyogre. It also faces almost no competition until Kyogre gets its signature move Origin Pulse, or other similar shadows are released.

Swampert, Samurott and Empoleon (and Kingler) are all extremely close as the best non-mega non-shadow non-legendary water attackers, and each one of them has its own merits. But Swampert has the best holistic performance overall, having the best typing for a water attacker and highest DPS on paper by a hair (that’s before even considering its mega). Any of the three will serve you well, and if you dodge, they become virtually indistinguishable.

Both Blastoise and Swampert are good for their megas. Shadow Swampert is also the top non-mega water attacker by far. As for non-shadows, Swampert, Samurott and Empoleon are all similar as the best non-legendaries, only behind megas, shadows and Kyogre.