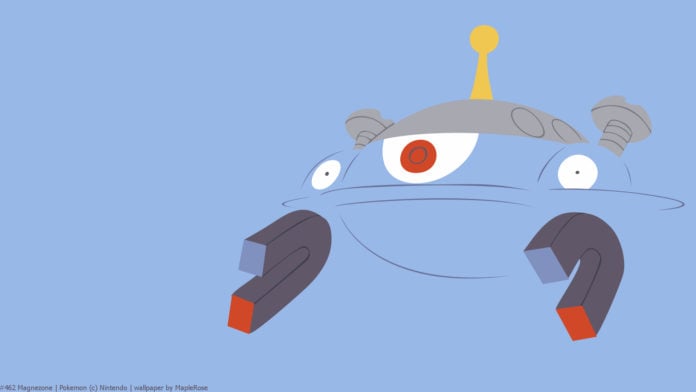 The Steel typing is the best defensive type in the entire meta. Period.

This type has 11 resistances out of the 18 different Pokémon types and inherently good bulk overall. Therefore, the Steel typing includes literal walls that stop offensive threats right at their tracks.

With scores of dual typed Steel Pokémon, the secondary typing ends up having the same number of resistances (11) or lesser.

But there is one type combination with Steel that takes the resistance toll to a staggering 12!

And it is the combination of Steel and Electric

This is a unique typing shared only by the Magnemite family and excelled by the magnetic beast: Magnezone!

The Electric typing has been always popular for its USP of having only one type weakness: Ground

Combine that with Steel and you can expect a meta defining Pokémon.

And boy, that’s exactly what happened with Magnezone!

Magnezone has always been a monster in a competitive playthrough. With the underrated Magneton receiving the Steel typing and gradual evolution in Gen 4, it rose (levitated?) to prominence immediately with its unique type combination and the distinction of holding the designation of the Pokémon with the highest number of type resistances!

So is this magnet strong enough to attract a high usage in the Pokémon Go meta?

How does it stack up with the limited list of powerful Electric monsters in the game?

And is it viable in both PvE and PvP?

Let’s rise to the opportunity and check out what Magnezone brings to the meta and see if it creates an electrifying presence.

The XII Resistances: It has a dual typing of Electric and Steel and as stated earlier, it has the highest resistances of any Pokémon with a jaw-dropping 12 resistances that include Flying Poison Steel Bug Dragon Electric Fairy Grass Ice Normal Psychic and Rock

Get a load of that!

Magnezone has the following stat distribution in Pokémon Go:

This Pokémon has a surprisingly great ATK stat for being such a resistant behemoth! For reference, Magnezone has a higher ATK stat than even Lucario.

Just don’t bring this UFO to the Ground

Magnezone can learn the following moves in Pokémon Go:

Charge Beam and Spark are both good, with Charm Beam being PvE oriented and Spark bring PvP oriented.

Ultimately, Spark edges out Charge Beam due to better damage and energy gains in PvP.

Wild Charge is a fantastic move, dishing out 100 DMG at only 45 energy. However, care should be taken to use it judiciously as a single use of Wild Charge debuffs Magnezone’s DEF by 2 stages.

Flash Cannon requires a lot of energy to get charged up, but is overall a decent move due to the nice energy gains of Spark.

Zap Cannon is an extremely costly move and not viable in PvP.  In PvE, Wild Charge deals 180 DMG in the same duration as Zap Cannon’s 150 DMG. Avoid Zap Cannon.

Mirror Shot is a gift. Coupled with Spark’s energy gains, shield baiting potential, and the chance to debuff your opponent’s ATK by one stage… Mirror Shot is an amazing 2nd charged move to have.

What is the ideal moveset for Magnezone?

The ideal moveset for Magnezone would be Spark paired with Wild Charge and Mirror Shot.

Magnezone is a dark horse in the PvP scene.

Offensively, it has got an amazing Electric type moveset that stops Togekiss in its tracks… something that is extremely essential to pack into your team. In addition, it can also do a good amount of damage to the likes of Dragonite, Metagross, Melmetal, Kyogre, Snorlax, Charizard, Tyranitar, etc.

More importantly, it can spam Mirror Shot to cripple the ATK of its opponents, something that renders the opponent weaker and possibly makes it switch out.

Defensively, Magnezone’s set of resistances gives it favorable match-ups against some of the meta’s biggest superstars.

So why doesn’t Magnezone get a 5-star rating in PvP?

While Magnezone indeed has a good outing against the elite, most of them carry coverage moves that can exploit Magnezone effectively.

And Magnezone is toothless against Garchomp, Swampert, Giratina, and Dialga.

As such, Magnezone is a mixed bag.

It excels in the right match-ups and is underwhelming in the bad ones.

However, it still packs thunderous applause (pun intended) for having the potential to debuff the ATK stat of its opponent even in unfavorable match-ups.

Because Mirror Shot charges super fast. This spark of hope is what makes Magnezone a very good choice for PvP, in both the Master and the Ultra League.

Magnezone’s set of resistances, decent bulk, and amazing moves make it an excellent lead to burn out the grunt’s/leader’s shields and also gives you a possible bonus by debuffing their ATK, which is a welcome gesture for shadow Pokémon.

Normally, one wouldn’t expect Steel types and more particularly, Magnezone with its 12 resistances, to occupy an offensive role in the meta.

But shockingly, it does!

Magnezone has a very neat ATK stat that lets it rival in DPS with other top Electric types.

However, Magnezone’s Steel typing offers it a very niche use in raids and gym battles: resistance to the Ice typing

Trainers tend to use Electric and Grass types to take down Water types.

But how many times has that Kyogre OHKO’d your Electric and Grass types with a hard-hitting Blizzard? For that matter, Zapdos and Zekrom would take super-effective damage from that Blizzard!

Add the fact that Water types tend to be inherently bulky, you need an Electric type that can reliably tank Ice type hits and hit back with super-effective damage.

Magnezone is the only Pokémon in the meta that can definitely take on nuke Ice type attacks and use an absolutely amazing Electric type moveset to zap out chunks of the opponent’s HP.

“Reliability” is the keyword when it comes to Magnezone.

Magnezone has managed to stay relevant to the meta. While not OverUsed ( 😉 )in Pokémon Go, it does enjoy a very good usage and does not disappoint.

The Steel typing is one of the best in the Pokémon world. While Magnezone doesn’t shine bright as a Steel type, its Electric typing, stats, and Mirror Shot make it an excellent Pokémon overall.

It does well in almost all departments and will always be beneficial in some way or the other.

Magnezone, when used well, can cause catastrophic cracks in the opponent’s armour. This Pokémon is truly an asset to the meta. I highly recommend you to use Magnezone more!