Three generations after Altaria made its presence in Pokémon Go and became the first Dragon type to require 400 candies for evolution, we finally have another.

Noivern is an absolutely amazing hybrid between a bat and a wyvern and puts other bat-like Pokémon to shame by being a cool looking dragon. Even its base form, Noibat, is a small and adorable Dragon type. Seriously, 11/10 for Noivern’s design!

When compared to Altaria, the stakes are higher with Noivern. This can be attributed to the following reasons:

So much grinding for a Noivern. Hence, it should be better than Altaria in PvP right?

Noivern is a Flying Dragon type and in essence, shares the typing of not only Altaria but pseudo legendaries like Dragonite and Salamence, and a legendary like the almighty Rayquaza.

How does it stack up against an elite group of Dragon types in the meta?

One can’t help but question again…

Will it at least be better than Altaria?

You can vouch for the fact that you will gain a thorough understanding of Noivern’s stand against Altaria and the meta in general.

Let’s begin by putting some basics across the board.

Noivern is a Flying and Dragon type Pokémon and as such, is weak to the Ice Dragon Fairy and Rock types; with the Ice weakness being 4x.

These resistances give Noivern an extremely attractive defensive standpoint as it resists the three main starters types as well as the two best offensive types in the meta: Fighting and Ground (these two types share the highest number of super-effective damage coverage).

Noivern has the following stats in Pokémon Go:

These stats clearly show that Noivern isn’t going to compete with its pseudo legendary and legendary Dragon Flying types in any way.

While Altaria is slightly bulkier than Noivern, the bat dragon clearly hits a lot harder.

But does Noivern have the moveset to justify its higher ATK stat?

Noivern can learn the following moves in Pokémon Go:

If these moves don’t make you frown, I don’t know what will.

For starters, it lacks a Dragon type fast move, and we really can’t do anything about it as Noivern learns neither Dragon Breath or Dragon Tail in the MSG. Sigh!

But its charge moves! It learns Outrage, Dragon Claw and even Dragon Pulse. Draco Meteor is just not that viable.

But this is not the real disappointment. Noivern was always touted to be a Flying type monster with Dragon Claw as a shield-baiting STAB move.

In this regard, Noivern really got the shorter end of the stick. It learns Sky Attack, Fly, Gust and Aerial Ace. Instead, it is stuck with the costly Hurricane.

Psychic is usable as it is the cheapest charge move available to Noivern.

Bite lacks STAB but is acceptable in certain situations.

Air Slash, having STAB, is the way to go. However, it is still a very average move at best.

So how does Noivern fare in comparison to Altaria?

Altaria never had the magnitude of stats that are usually associated with Dragon types but what it does have is an excellent moveset. With Dragon Breath, Sky Attack and Dragon Pulse, Altaria isn’t just a good Pokémon in the Great League… it’s one of the best.

Noivern, unfortunately, won’t fill any such niche in the meta.

Also, let’s not forget than Altaria has a mega evolution (and a unique one at that).

Do note that it could have been great with a better moveset (I’ll come to that later).

What is the best moveset for Noivern?

To be honest, nothing.

None of its moves really help Noivern shine in any way (on that note, it has got a gorgeous shiny!)

But if you really love Noivern (which I do as well), I’ll put out the best moveset for our benefit:

Between us, don’t even think of wasting your resources for a second charge move.

In meta where pseudo legendary and legendary dragons run rampant with powerful movesets, Noivern just disappears in the dark when it comes to being a Dragon type. It will stay in the dark, bite and slash, but won’t compete in any way whatsoever with its draconic peers.

As a Flying type, the crow beats the dragon bat. Honchkrow still dominates. Oh, did I mention that Noivern is also competing with legendary Pokémon like Rayquaza and Yveltal in this?

This Pokémon requires 400 candies to evolve and the grind to that is real.

So you can use it in raids or place it in gyms to flex. That’s currently the best you can do out of a Noivern.

Noivern can put up a decent showing in the Great League meta, beating any of the Grass and Fighting types, while also troubling the Ground 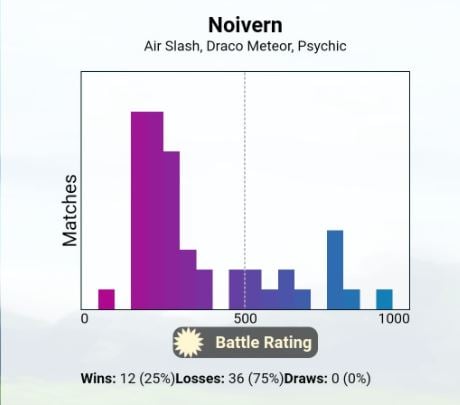 Current performance of Noivern in the Open Great League with 1 shield. Source: pvpoke.com[/caption]

By giving it Gust and Dragon Claw, and with the same 1 shield situation:

The current Noivern, at the end of the day, is just not reliable for the Great League.

Let’s see what the sims say:

So… the Premier Cup perhaps?

The competition in Ultra League, Premier Cup or Open, is too much for Noivern to handle.

At least, it can be a nightmare to the Grass types present here and there in the Great League.

But with the grass not being greener in the Ultra League, Noivern just slips away.

To end the PvP outlook on a bittersweet note… if you imagine a Noivern with UL stats in the Premier Cup, with Gust, Dragon Claw and Psychic:

This is actually sad.

Noivern is the embodiment of wasted potential. With Gust and Dragon Claw, it could have been a legitimate threat but alas!

It pains me to write this:

All that 10 km hatch/rare spawn/5 km buddy distance/400 candies is just not worth it. It’s nothing more than a dex filler that you can flex at gyms or raids.

The grind is unreal and sadly, unnecessary with regards to Noivern’s current performance.

This is a really popular Pokémon. It was even a part of Ash Ketchum’s Kalos team. Greninja isn’t exceptional in Pokémon Go at the moment and Noivern falls even harder.

A move rebalance is in order if Noivern ever hopes to be meta in Pokémon Go. Till then, this bat dragon is better off at its bat cave.

It’s the dragon we deserve but not truly need at this moment.

But we will hunt it…

With the hope that the future brings in a dawn of justice to this amazing Pokémon.