Hello Trainers! Version 0.201.0 of Pokémon GO is rolling out now through the app stores. Woo, we’ve broken past version 200! This update includes the ability to mass transfer legendaries, hints at new Pokémon coming soon to a Pokébox near you, and more!

You can read the official release notes here and below:

It’s finally here! The ability to turn on the mass transfer of legendaries is live, I’ve tested it and it works. This is huge Quality of Life update and will make those 2x candy transferring events even easier! 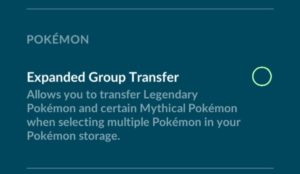 The Option to turn the feature on is in the settings, right above Push Notifications. 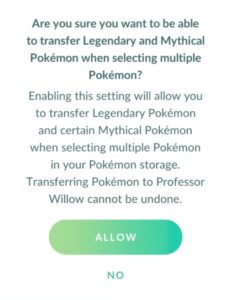 It also warns you of the potential dangers of allowing mass transfers of legendaries, and that they can’t be undone and all that.

It looks like we’re going to get the Galarian variant of Corsola and its evolution Cursola. Galarian Corsola evolves in Sword and Shield at level 38, so it’s likely it will just be a straight candy evolution.

Galarian Slowpoke, Slowbro, and Slowking might be making an appearance as well. Look at that majestic beast!

I’m putting this here because this likely means we’re getting yet another two new Pokémon coming to Pokémon Go.

In the main series games, Inkay had an interesting evolution requirement. You needed to level up Inkay after level 30 while your game system was being held upside-down. The code above hints that this mechanic is coming to Pokémon Go, and suggests that Inkay might be on its way as well.

This looks like we’ll be able to see what’s potentially inside an egg, as well as the rarety of the available Pokémon. Apparently, we won’t get percentages but instead will get rarity icons instead. Which isn’t surprising. There’s also a toggle in the Game Master file, so the miners will be able to tell when it goes live.

This might suggest we’ll get new catch rings? Or maybe something to give our Pokémon we really like?

That’s all for this one Trainers, stay safe out there!