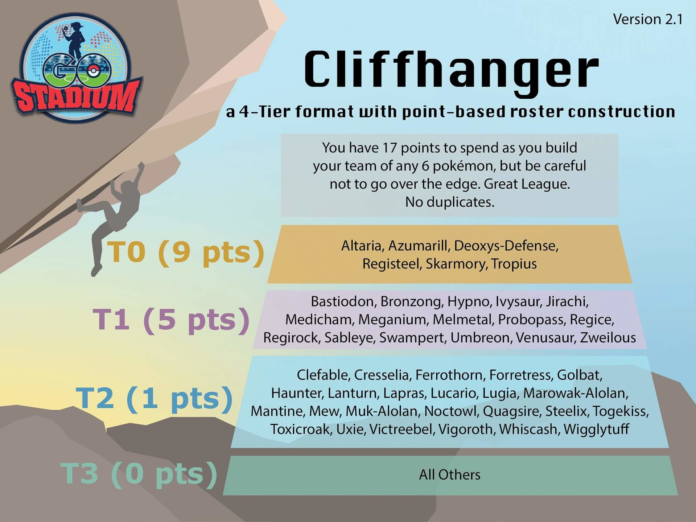 GOStadium has just announced the second version of their Cliffhanger Format via Discord and Reddit. This iteration has now added the Generation V mons, as well as tier changes to certain mons due to the recent Movepool Update Niantic made recently and the introduction of new moves like Lock-On. Before we delve in further, what is Cliffhanger

Cliffhanger is a format introduced by GOStadium, a Pokemon GO Competitive Battling Community that popularized remote PvP tournaments. They introduced Cliffhanger during the season break of Silph Arena in September. In Cliffhanger, you have 17 points to spend on each team, but Pokemon are assigned 4 Tiers with each tier assigned 9pts, 5pts, 1pts, and 0pts. The higher the points, the stronger the Pokemon are. Because of the total amount of points, you can’t use that many top tier Pokemon in your team, pushing you to be creative in your team-making.

Cliffhanger is a good introduction for players that are new to PvP. The tiers basically show new players which Pokemon are generally good, which means new players now have priorities on which Pokemon they should look for in starting their PvP roster. Because of how limiting the format is when it regards to creating a team, this format also helps you hone on team building outside of the high-tier Pokemon. For veterans, this format is a great palate cleanser since you will rarely see the same team composition.

If you want to play this format competitively, as of writing, there are no announcements on when the next Cliffhanger will be, but GOStadium is definitely the best place to start. Join their community by joining their server right here. It will take time before you can start playing since you are obligated to be Ultra Friends with everyone in your lobby. You will also need around 18 Friend space (which is a luxury for some players). If GOStadium is not up your alley, you can host your own Cliffhanger in your community. As an example, I hosted a Cliffhanger in my community around September (link here). While the turnout was below average, the difference between team composition is astounding. If you want to host your own, you can use this tool that I made to verify if a player is following the 17pt allowance. (link here) You can also use it as a personal tool to help you create your own Cliffhanger Team. 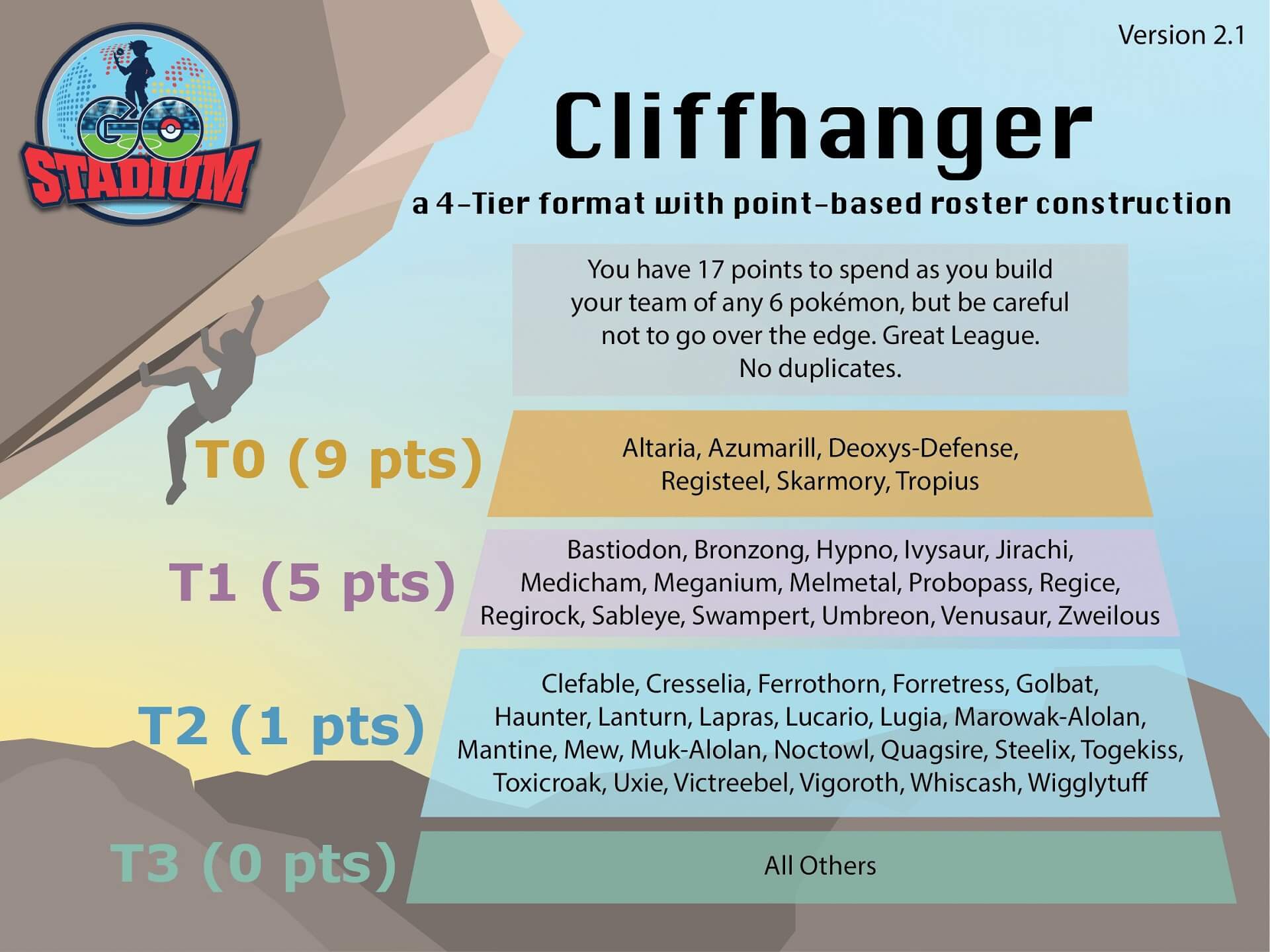 If you’ve already played the first Cliffhanger, here is a summary of all the changes in the tiering (thank you /u/Longlade13 for collating these changes)

Here are some notable changes:

With the release of Lock-On, the Regi Trio are now wreaking havoc in Great League, lead by Registeel which sports the rare pure Steel typing. The timing of these three’s reign couldn’t have been better with Power-Up Punch being recently nerfed and Fighting types (their common weakness) on the decline. All three should still struggle in being picked, especially Registeel, since the other T0 Pokemon are also great and can arguably be easier to fit on any team. That doesn’t mean these Pokemon are to be ignored, since they are still one of the best late-game Pokemon in the meta.

The fall of Medicham to T1 perfectly depicts the fall of Fighting types due to the Power-Up Punch nerf. It doesn’t mean Medicham is bad. In fact, it arguably made Medicham more unpredictable, with the buff of Psychic and Dynamic Punch still at its disposal, plus Psycho Cut being an actual option rather than a gimmick. It also helps that Umbreon and Sableye are also T1 now, making them less of a threat to Medicham, especially to players that opted a T0 on their team.

Tropius’ rise is not that surprising, since it’s dual role as the Grass and Flying type of the team made it a better option than Venusaur and Meganium in some cases. I honestly think it shouldn’t have been T1, because its T0 placement means it will surely drop in usage, since it’s hard to argue picking Tropius for your T0 when metagame staples like Altaria and Skarmory can do a better job in the Flying-type side while still being able to find cheaper Grass options.

Zweilous, the Draconic Body Slam spammer, sits perfectly in T1. It is similar to Swampert wherein it has a powerful combination in Dragon Breath and Body Slam but with a bad weakness to Fairy and falls to Charm pretty quickly. You may need to opt for a better T1 especially if you still don’t have one, but you can’t ignore Zweilous overall burst of power when picking an early game damage-dealer.

Cresselia dropping down to T2 means you can have a budget Confusion user if you can’t afford T1 Psychics like Hypno or Bronzong. Alolan Marowak rising to T2 is actually not surprising. It was a popular pick in T3 as a cheap Medicham counter, and with Fire Spin, it should be perfectly capable among the T2 Pokemon. Mantine as a Bubble Beam debuffer will be useful especially on Pokemon that rely on high DPS fast moves like Confusion, Charm, and Dragon Breath. Mantine should be a good steal in T2.