Trainers in Australia, Singapore, the UK, and Mexico can now see a new real-time sky mechanic that mimics the in-game sky based on your geographical location.

The first screenshots are in from various regions of the world, and we must admit: Pokémon GO never looked this good before. Check out the screenshots below, mostly taken in the UK and Mexico:

There’s a few notable changes to the way the global map looks like with the new sky mechanic.

The global illumination coming from the sky box affects the overworld map color as well. During rainy days, the usually green segments get desaturated to mimic the color of the sky. One Twitter user noted that his game looks like a black and white movie from the 60s, which is not far from the truth:

So it seems my real-time weather is a 1960s movie b/w. 🤔🤣 pic.twitter.com/0ALofWjpch

Another thing to note is that the ground coloring doesn’t transfer over to the catch screen, only the real-time skybox texture does. For example, the new Rainy weather looks great in the overworld, making the map desaturated and mostly gray, but in the Catch screen the ground is still bright green!

As one reddit user noted, the sky changes but the ground and the trees stay green and saturated like in sunny weather, doesn’t match the overworld color scheme. We do agree that this is jarring and needs to be aligned with the overworld map: 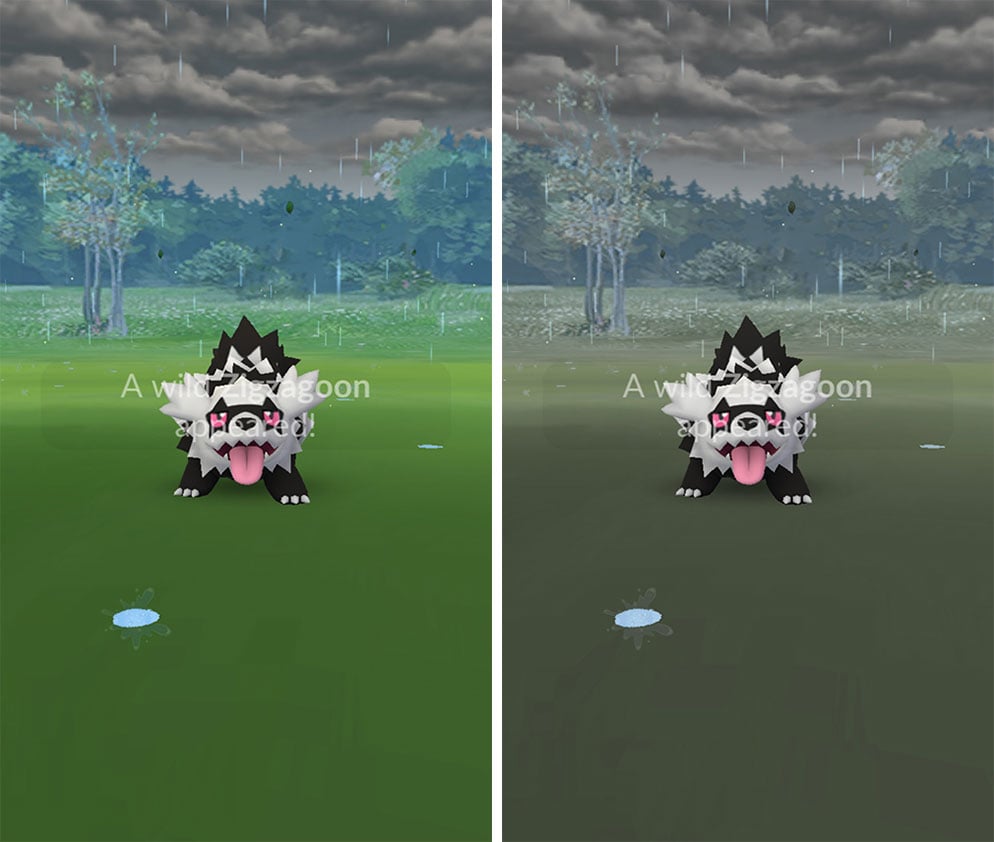 Outside of this issue, players have reported dropping a few FPS on lower end devices and some initial quirks with the system (randomly switching between night and day modes).

The staged rollout is a good thing, and we hope these issues will be nailed down before a worldwide release.

However, there’s one thing we’d love to see before this change goes globally live: the ability to turn off or tone down the effect. Not everyone loves the desaturated rainy look, and in places where it rains a lot (like the UK), this visual could become the default Pokémon GO visual!

We’re sure not everyone will be onboard with this change. Good work Niantic, but it does need a little bit of polishing before a worldwide release.