Trainers, Niantic has officially announced that the next themed Raid Day will be Zapdos Raid day, following the weekend after GO Fest! If the global Pokemon GO community, and the players participating at GO Fest (GO Hub team included) manage to complete professor Willow’s challenge, on Saturday, July 21 Zapdos will be the only raid boss available during the three hour long time window!

Let’s break this down:

Thunder Shock Zapdos is actually a viable Electric type, performing worse than Raikou in most match ups, but much better than before. Thunder Shock is an amazing move compared to Charge Beam: it has better DPS, it’s faster and it generates energy almost as good as charge beam:

Zapdos desperately needed a buff in Pokemon GO, and Thunder Shock is the way to go. We did a really quick sim versus Kyogre with all move sets, both Zapdos and Raikou used best move set (Thunderbolt and Wild Charge respectively) and the results are more or less expected:

It’s curious to see how Blizzard, despite dealing increased damage to Zapdos, isn’t that much of a threat when compared to Hydro (aka Glorious) Pump. In any case, Raikou still reigns supreme, but Zapdos got a fairly solid buff.

When looking at Zapdos move sets, the situation is also clear – Thunder Shock is strictly better: 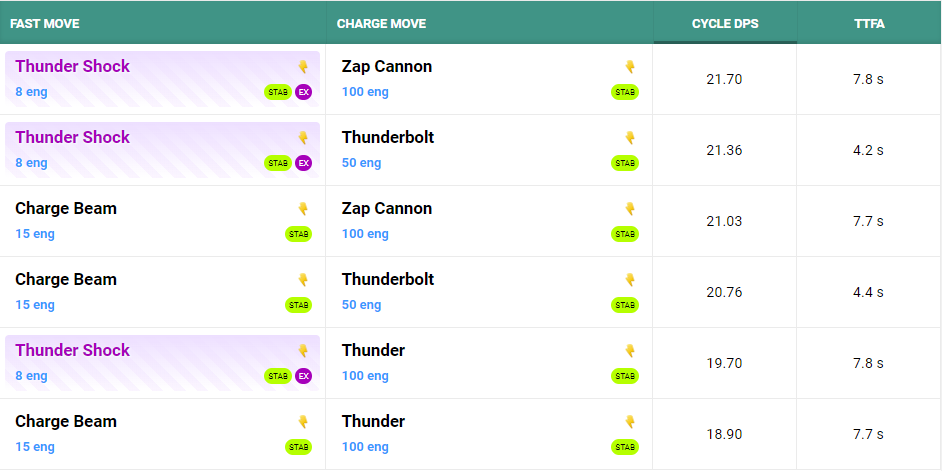 We hope to see you on the streets again, especially Team Instinct players – There is no shelter from the storm!