A PvP Analysis of Zarude, the Grass Monkey! 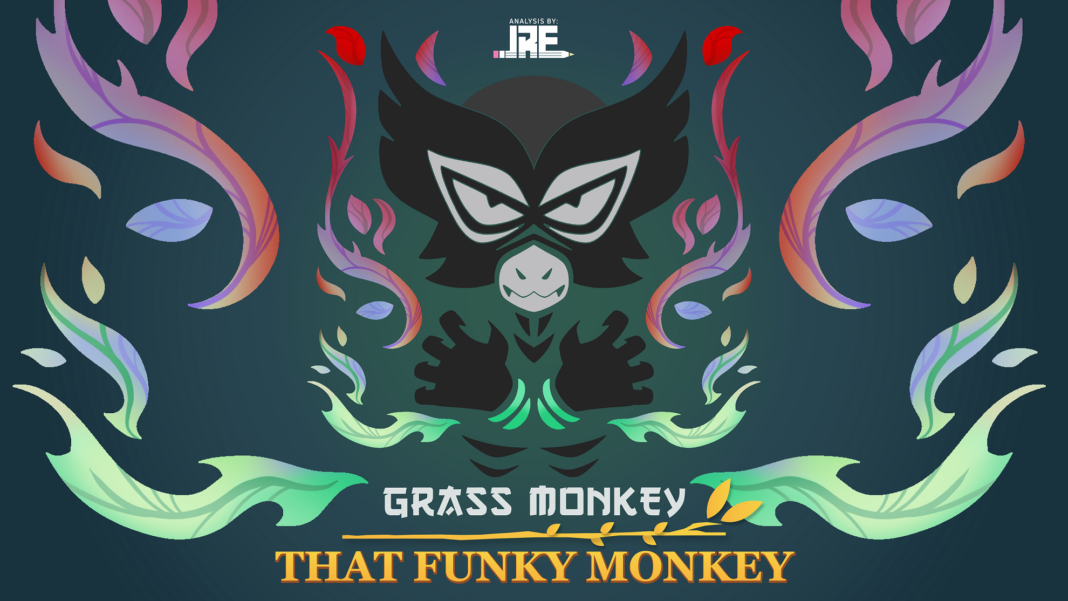 With apologies to The Beastie Boys, but go ahead and sing along… you know you wanna!

And now that’s stuck in your head for the rest of the day… you’re welcome! 🙉

So hello there, fellow PvPers! Well there’s not much beating around the bush… we’re here to put the  Grass Monkey itself, ZARUDE… under the lights.

How does Zarude handle itself in PvP? It is funky, or just funk? Well first, as always, let’s break down the stats and typing and all.

Normally I throw up some “average” IVs/stats and then show the ideal, but in this case we’re trying to do things a little more realistically. Zarude is coming to us through special research, so as with other Mythicals in GO, we’re just getting one (for now, at least), and it will have hatch/raid/research-level IVs, with 10/10./10 as the floor. And as a Mythical, we are very unlikely to be able to trade it, so that 10-10-10 is the absolute floor for everyone… no method to get the actual best Ultra League IVs of 0-11-14 (160 Attack, 149 Defense, 163 HP, 2499 CP), making the 10-14-11 I have up above the best we can hope for… and the 4-4-4 IVs necessary to squeeze a Level 15 Zarude into Great League completely impossible. (That’s why I didn’t even bother going over GL stats, and won’t be reviewing Zarude in GL beyond that one link I just provided.)

ANYway, all that behind us, what have we got to work with here? I usually like to compare to established Pokémon for stats, so Zarude is closest to Empoleon, Togekiss, Alolan Golem, and Ampharos in terms of Attack strength and overall bulk… Empoleon’s stats are almost an exact copy, actually. And in Master League, some of its closest comps are Mamoswine and Rhyperior. So in other words… Zarude is not particularly bulky. But of course, those others I mentioned with similar stats certainly compete just fine in PvP, so the stats are hardly a killer.

How about the typing? It’s probably familiar to anyone who’s been running Shiftry in PvP, with a ton of resistances AND vulnerabilities. There’s so many I’m going to just put them in a quick table:

In other words… it resists everything other Darks and Grasses resist, and is weak to everything Darks and Grass are weak to, and the only combination is that, with Dark and Grass both being weak to Bug, Zarude is double vulnerable to Bug. (The double resistance to Psychic comes from Dark alone.)

So Zarude’s typing is a true wild card… sometimes it will be great, and sometimes it will lead to it getting blown out. The good news, perhaps, is that it’s at least bulkier than Shiftry in Ultra League, so it won’t lose quite as badly when things go awry.

But Shiftry (and other ‘mons with so-so stats akin to Zarude) have moves that are more than good enough to vault them to PvP success. And I’m pleased to say that, yes, Zarude does too.

Let’s keep this one simple: it’s Vine Whip you want. Bite has the energy generation of Charm and Razor Leaf, but deals at least 1.0 less DPT. It’s not an awful PvP move, but it’s too slow to power out charge moves for the compatively low damage output. Vine Whip deals slightly below average damage, but will get to charge moves literally twice as quickly as Bite. Charge moves like:

Right off the bat, we can push Energy Ball off the raft. As you can see when you lay them out together, Power Whip is strictly better, dealing the same damage, and the same type of damage, for 5 less energy. Thankfully, this is only disappointing charge move in Zarude’s arsenal, as Power Whip is a really good move, and even the comparatively lesser Dark Pulse (10 less damage for the same cost as Power Whip) is fine because it’s still Dark’s most energy efficient charge move aside from Payback (and Payback and its 60 energy is not what Zarude wants for its only Dark damage output). Sure, it also has Crunch in its moveset in Pokémon Sword and Shield, but Pulse is fine… no complaints from me.

And the numbers back up that it’s just fine. We’ll start with Ultra League, where Zarude looks… admittedly just “okay”. (It would be roughly the same with Crunch, by the way, gaining Drifblim and Dragon Breath Giratina-A, but losing Meganium that Dark Pulse is able to overpower.) But things are perhaps better than they initially appear. Look at the names on that win list: ALL the big Waters, plus Galarian Stunfisk, thanks to the Grass moves. And even with only Dark Pulse dealing super effective damage to Psychics and Ghosts, Zarude manages to take out all the big name Psychics but Lugia and DDeoxys (being weak to some of their moves, which doesn’t help), and beating Giratina-O, Shadow Claw Giratina-A, Cofagrigus, Jellicent (of course, with all of Zarude’s moves shredding it), and Gengar with any moves but Sludge Bomb (even Focus Blast is normally too slow to flip it), as well as that win I mentioned over Meganium, plus Zarude manages to outrace Umbreon, even with Last Resort. Overall it occupies somewhat of a niche role, but aside from XL Shiftry, nothing else CAN fill that role… and of course, Shiftry is much more expensive, needing to at least Level 46 or so to compete in Ultra League. If you’ve been trying to build up a Shiftry for Ultra… well, here’s your more affordable replacement.

But the real story is what happens beyond Ultra. Shiftry barely exceeds 2600 CP even at Level 50. Zarude, on the other hand, gets above 3800 CP… at Level 40. And that’s what we’re going to look at, since getting XL candy for Zarude at all is virtually impossible, much less enough to get it anywhere NEAR Level 50. Zarude is going to be a Master League Classic piece. So I’m pleased to announce that yes, it’s quite good in that spot. 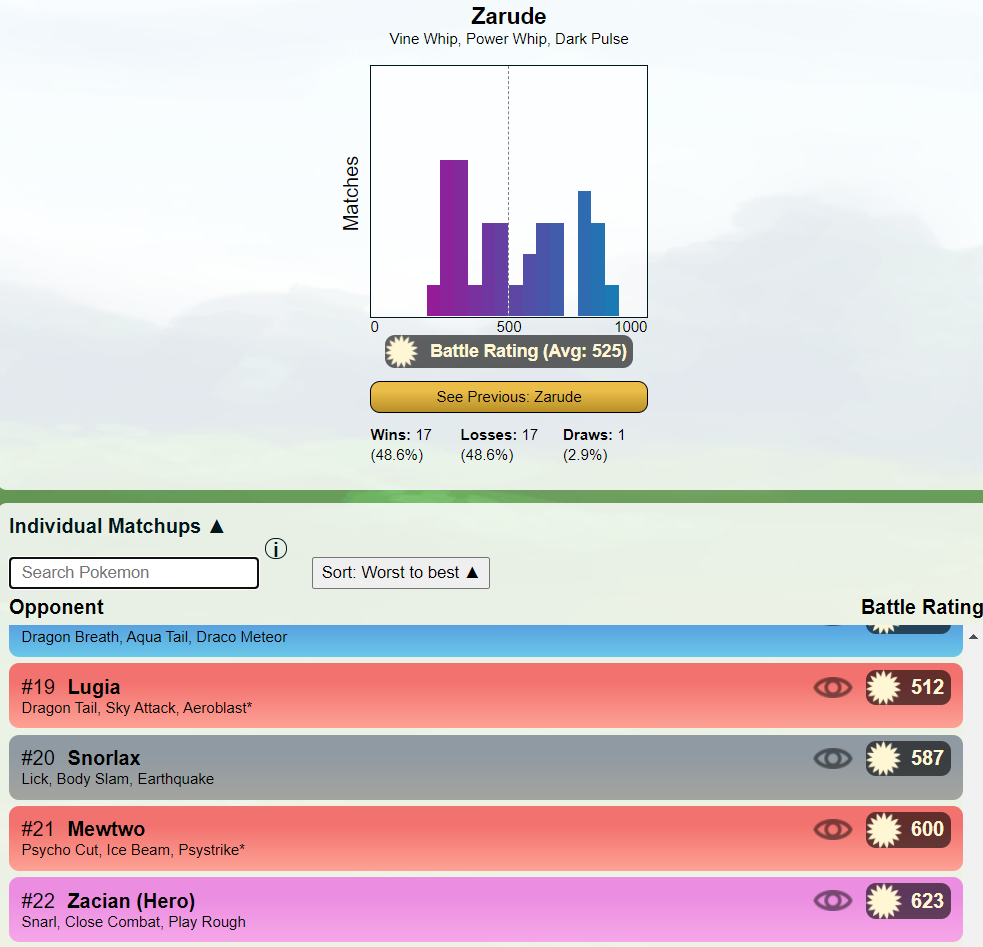 If you look over the win list, it’s kind of obvious why, too: it takes out all the meta Water types, and every Ground (and Rock) except Mamoswine (with its obvious advantages versus Grass types) and usually Garchomp (which Grass, of course, deals only neutral damage to). This may seem obvious, as Zarude, of course, deals primarily Grass damage, but that’s kind of the point: Grass types just have not existed at this level until now. The only other Grass types in GO that cross even 3400 CP are Exeggutor (3408 CP), Tangrowth (3425 CP), Virizion (3417 CP), and Celebi (3691 CP), and other than Tangrowth, all of those usually deal Grass damage only through charge moves, not a steady diet of Grass. And literally the only thing that Tangrowth can beat that Zarude cannot is Sylveon, while Zarude beats everything else Growth does PLUS Therian Landorus AND a slew of Psychics and Ghosts including Mewtwo, Lugia, and both Giratinas (regardless, this time, of what fast move Altered is using), plus Snorlax (regular or Shadow) with its Ghost damage from Lick. In fact, with Yveltal really being the only other good Dark we have to compare it to, it’s worth noting that Zarude beats all the same meta Ghost and Psychics — and often with comparative effectiveness — with the sole exception of Grass-resistant Metagross (and even that limps away less than 5 HP!). With that one exception, Zarude captures Yveltal’s anti-Psychic/Ghost role just fine in addition to all the other good it does.

And more good news: IVs thankfully don’t matter all that much, a particularly nice thing since we don’t get to reroll them. As long as you get an average type of spread, Zarude still gets all the same wins and losses as a “hundo” (15-15-15) one can. (Even something as low as like a 10-12-13 still gets the same job done!) If you’re interested in a deeper dive on IVs, u/cargyelo already did a very nice one here, so check it out. (Main highlights I found are that 13 HP gets Zarude to at least a tie with Palkia, 14 Defense hits a Rhyperior Mud Slap bulkpoint, 12 Defense is a Dragon Breath breakpoint versus several Legendaries… but seriously, check that other analysis out which has ALL the details beyond what I just found) The main takeaway is that if you don’t get a hundo (or something close to it), your Zarude is likely still very much worth powering up anyway for Master League use, so don’t despair at your 10-12-13… you’re still alright for PvP!

And another perk of powering up to Master League level… you can get yourself a super solid PvE Pokémon as well! Take a look at this chart comparing Zarude to other top Grass options (compiled from the GO Hub Database):

Zarude leads other big name Grass types in terms of Damage Per Second and Total Damage Output, resulting in the best Grass attacker available in the game (with the caveat that Mega Venusaur throws everything off when its in the battle by providing the boost it does, so its mileage may vary). Now yes, that’s assuming a Level 50 Zarude, but still… it’s clear that Zarude is no slouch when it comes to raiding future Kyogre, Groudon, Regirock, etc. You can’t get a team of them, obviously, but one built up and ready to rock can headline any prospective Grass team you’re putting together.

If PvE is more your thing, I strongly recommend checking out this article from my colleague Kratos and this post by u/Caio_Go that both directly compare Zarude in PvE to other options like Shadow Tangrowth, Mega Venusaur, Shadow Torterra, Shadow Victreebel, Shadow Venusaur and others in much more detail. Both of those analyses are much more scientific than anything I could do, and I don’t want you hamstrung by my more limited knowledge in the PvE realm. Damnit Jim, I’m a PvP analyst, not a Pokebattler!

Alright, gonna stop it right there and let you get back to your day. Get hyped for Zarude… it’s gonna be a fun one!

Continued thanks to my PvP friends, local and around the world, who have lent their own ideas and suggestions over the last nearly three years of PvP play, and helped teach me to be a better player and student of the game. And thank you for reading… I appreciate your attention and encouragement.

(Photo credit for another fantastic header image to DarthRaae.)