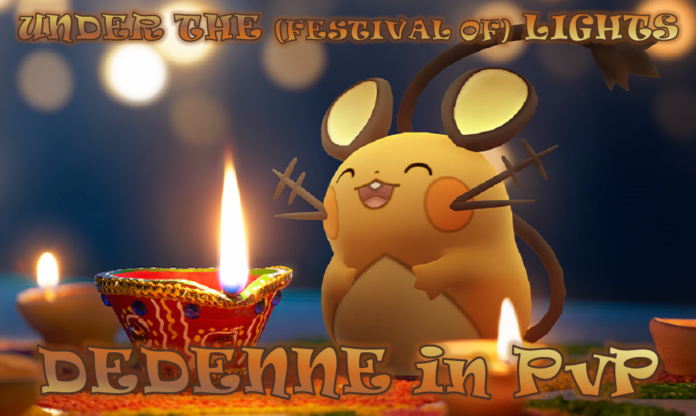 The “Under The Lights” article series provides some deeper dives on Pokémon of particular interest in PvP. This time, that means it is time to put the game’s newest “mighty mouse”, the shorter and rounder cousin of the Pikachu and Raichu families, Dedenne… under the lights.

Dedenne bears more than a passing resemblance to Raichu (and Alolan Raichu), so it’s only natural to compare them. Dedenne has bulk on its side, having notably more bulk and a higher overall stat product than either of the Chus (who have around 108-113 Defense and HP and 133+ Attack in Great League, on average). So that’s a good start.

The more interesting thing, however, is the typing. We’ve had Faires that are half Normal, Steel, Grass, Flying, Psychic, and of course a very famous (or should I say infamous) half-Water bunny fairy. But Dedenne is our first Electric/Fairy type. What does that mean?

The only real crossover between Electric and Fairy is Steel: Electric resists, but Fairy is vulnerable, so Dedenne ends up taking neutral damage from Steel. Everything else remains, all the good and the bad from each typing. So Dedenne resists Electric and Flying (from its Electric typing), as well as Dark, Fighting, Bug, and 2x resistance to Dragon (from its Fairy typing).

On the downside, it’s vulnerable to Ground (from Electric) and Poison (from Fairy), though those are its only two weaknesses. Overall, it’s a pretty favorable pairing, moreso than, say, Alolan Raichu and its five resistances (Electric, Flying, Fighting, Psychic, Steel) and four weaknesses (Dark, Ghost, Bug, Ground).

Easy decisions in life: get the dessert, take that trip, and always run Thunder Shock, especially when the only other choice is Tackle. It really is that simple of a choice here. Moving on….

And again, easy decision here… because at the time of this writing, these are the only two charge moves Dedenne has! It also had Parabolic Charge until a few days ago, when Niantic decided that rather than give it viable stats and make it an interesting move, it was easier to just snip it away entirely. (It IS still assigned to Helioptile and Heliolisk, so I’m curious to see what they do with it when they’re released, but I digress.)

So here we are with just Discharge and Play Rough.

In MLG, Dedenne does learn virtually every Electric move currently in Pokemon GO (literally all of them but Zap Cannon), as well as some interesting coverage moves like Grass Knot, Signal Beam, and Aerial Ace, so perhaps a move shakeup is still on the horizon.

But while I was initially dismayed at the loss of what could have been a fun new move in Parabolic Charge (depending on what Niantic decided to do with it), I gotta say… upon further review, I’m not sure if Dedenne really needs anything else than what it has now. Well, maybe Volt Switch, but again, I digress.

Thunder Shock/Discharge isn’t the most amazing Electric combo ever… not by far. But it’s enough to handle things like Azumarill, Dewgong, Lapras, Pidgeot, Talonflame, Skarmory, Registeel, and Melmetal… admittedly rather standard fare for a half decent Electric. Where Dedenne really stands out, though, is with Play Rough.

It can beat the likes of Defense Deoxys, Medicham, Scrafty, Sableye, and Chesnaught without needing to bait at all… just straight Play Rough for the win. (And incidentally, the Medicham win is especially impressive, as only Zebstrika and sometimes Alolan Raichu can replicate that win.)

Anyway, with some baiting (getting a shield with Discharge and then closing with Play Rough), Dedenne can add on big names like Umbreon, Tropius (Air Slash), Machamp, and things neither Raichu can normally beat, like Shiftry, Obstagoon, Galvantula, and Altaria!

However, lacking the raw power of Wild Charge that the Chus have means that it fails to beat some things they can like Bastiodon, Hypno, Cofagrigus, Cresselia, Froslass, Greedent, Alolan Ninetales, Toxicroak, Vigoroth, and sometimes even Politoed and Jellicent.

So it’s not all sunshine and rainbows, but Dedenne is at least a viable sidegrade to the Chus, and one that could potential sneak into metas they cannot (like the just-departed Halloween Cup), and is likely to carve out at least a small presence in Great League formats.

Similarly, with shields down, Dedenne alone is able to overcome Altaria, Scrafty, Sableye, Shiftry, and Chesnaught, and has standout wins shared by only one of the Raichus versus Umbreon, Medicham, Hypno, Galvantula, Machamp, and Mew, though it fails to beat DDeoxys, Cresselia, CharmTales, Politoed, Registeel, Froslass, Lickitung, or Shadow Victreebel like at least one of the Chus are able to do.

Not surprisingly, Dedenne is a little worse off as a pure Electric due to having only Discharge (and not the awesomeness of Wild Charge), but much tougher on opposing Darks and Fighters than the vast majority of other Electric types thanks to Play Rough (with STAB!) and resisting Dark and Fighting damage (and Bug, for when that matters).

It occupies a pretty unique spot because of that coverage, though whether or not its uniqueness will lead to any true breakouts in Great League remains to be seen.

I suspect the fact that it’s an Electric masquerading as a Fairy will allow it to make a dent in formats that specifically permit Fairies but not Electric types on the whole (like Halloween Cup).

And while Dedenne doesn’t get big enough for Ultra League (topping out at 2081 CP even at Level 50), it obviously CAN get smaller… like for Little League, perhaps? As Niantic seems determined to keep that format alive, it’s worth it checking stuff like Deedee for Pee Wee, right? (No, not THAT Pee-wee.)

Again, perhaps the easiest way to figure out how good it is comes down to comparisons to other Electric mice… Pikachu, in this case. Pikachu Libre was immensely popular in Little Jungle Cup, for example (for those lucky punks who had one under 500 CP… observe as I bite my thumb at you, sir/madam).

And while it obviously gets there a different way (Fairy damage from Play Rough rather than Libre’s Fighting damage from Flying Press), Dedenne has the same good record, beating Altaria, Umbreon, Deino, and Shadow Stunky, while Libre instead beats Chansey, Galarian Stunfisk, Swinub, and Abomasnow. (All other wins — Ducklett, Golbat, Mandibuzz, Obstagoon, Scrafty, Skarmory, Toxicroak, Vigoroth — are shared.)

A much closer comparison would be something like Pikachu Pop Star, with Thunder Punch and Play Rough… and there’s really no comparison there, with Dedenne’s wins versus Deino, Obstagoon, Scrafty, Stunky, Umbreon, and Vigoroth being unmatched by Pop Star Pika, thanks in HUGE part to Deedee’s resistances to Fighting and Dark damage.

So yes, between those examples and Dedenee’s overall record in Little League being comfortably above 50%, I would not at all be surprised to see it have a mini breakout in a future Little Cup format.

I feel like I already kind of wrapped it up as I went, so giving people the short TL;DR many beg me for:

There we go… not TOO cumbersome this time, I hope. I’m saving that for my in-progress analysis on Kanto Cup. 😅 Until then, you can always find me on Twitter with near-daily PvP analysis nuggets or Patreon if you’re in a giving mood!

I do hope this was… well… illuminating. 💡😜 Catch you next time, and be safe out there, Pokéfriends!