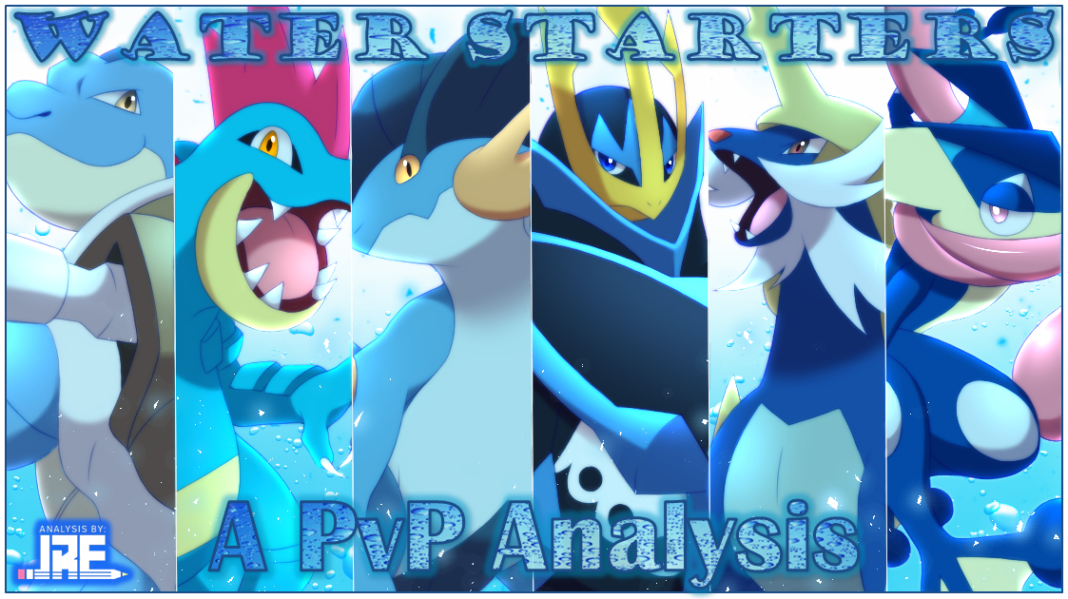 Shiny Pokémon to Look Forward to in Pokémon GO: Part 2

Hello again, fellow PvPers! Next week brings an unexpected surge in Water starter spawns with the Ed Sheeran Collab event, and while it’s not a PvP-centric event per se, I saw this as a great time to review the various Water starters and what makes them good ⁠— or not ⁠— in PvP play.

So let’s start with a side by side comparison of their stats, typings, and CPs across the various leagues and then start digging into what makes each of them tick!

A few of these can creep above 3000 CP (or even 3200 CP, in the case of Feraligatr and Empoleon), but the only one that really has any play at this level is Swampert, so here are its stats:

So normally I’d follow this up by talking about an individual Pokémon’s stats and typing and what those mean in the big picture, but since we’ve got six different Pokémon to mention here, let’s just cover the highlights:

As far as typings, half (Blastoise, Feraligatr, Samurott) are pure Waters, famously vulnerable to Grass and Electric and just as famously resistant to Fire, Ice, Water, and Steel.

Half-Ground Swampert is one of the infamous Mud Boys, known for being doubly weak to Grass but taking no worse than neutral from anything else (and gaining notoriety for being a Water type that actually resists Electric).

Empoleon’s Steel subtyping comes with a long list of resistances ⁠— Dragon, Fairy, Flying, Psychic, Rock, Bug, Normal, 2x to Poison, and doubling up the resistances to Ice and Steel while keeping a resistance to Water ⁠— but takes neutral from Fire, keeps the standard Water weakness to Electric, and picks up worrying vulnberabilities to Ground and Fighting; mostly good, but not without critical new chinks in the armor.

And Greninja… it retains all the good and bad of being a Water AND the good (resistances to Psychic, Dark, Ghost) but critically also the bad (weak to Fighting, Fairy, and Bug) that comes with its Dark subtyping… overall more of a curse than blessing for something already very vulnerable in general.

So that’s all the setup. Now let’s get to some more specifics on how they perform in PvP.

How they perform in PvP

The most famous and widely used is, completely unsurprisingly, Swampert. A menace or savior, depending on who you ask, in all three leagues, and probably not one that requires much explanation in this article. That single (though critical) vulnerability to Grass makes Swampert dangerous versus nearly everything that’s not leafy, and with big closing moves in Earthquake or Sludge Wave, it can even turn the tables on Grasses with heads up play. SO good is Swampert that even one without the Hydro Cannon that drives (most) all of these starters can still be dangerous (and not nearly as far behind Hydro Cannon Swampert as you might think!).

That all said, like the others we’ll discuss below, you obviously DO want Hydro Cannon, and perhaps more so than anything else in this article, a good Swampert is well worth the Elite Charged TM to get Cannon if you need it and cannot otherwise acquire it. (Trades should be able to land you one, though good IVs are much harder to engineer that way, of course.)

Anyway, be it in Great, Ultra, or Master League (and whether with Earthquake or Sludge Wave), between fantastic spam with Cannon and Mud Shot, excellent closing/coverage moves, and a long list of resistances, there are few more reliable performers in PvP than Swampert.

It has earned all the attention and accolades it has accrued over the years, and should continue to into whatever the future of PvP holds.

The other Water starter that has seen good success in PvP since being blessed with Hydro Cannon is Empoleon. A lot of it comes down to its long list of resistances, being a Water that can legit outduel Dragons, Charmers, Confusioners, Body Slammers, most Flyers, nearly every (non-Grass, of course) Poison, and a host of others that most of its fellow Water types just can’t handle.

Unlike the super spammy Swampert and its Mud Shot, Empie rolls with high damage but below average energy gainer Waterfall for its fast move (at least, until and unless Niantic ever gets around to buffing Metal Claw), but don’t let that fool you into a false sense of security: Hydro Cannon and fantastic coverage move (AKA super effective versus Grasses) Drill Peck both come for only 40 energy.

So even slow Waterfall reaches them both just as fast as, say:

It is also faster than:

That doesn’t mean it wins all those matchups, of course, but it DOES win a goodly number in Great League but especially in Ultra League (to include Premier Cup), where it’s found a particularly successful niche, anchoring teams like Double Dragon and others that protect its few weaknesses well. It’s even begun showing up in Master League here and there.

(And also keep in mind that Empoleon can be evolved during December Community Day weekend with exclusive move Hydro Cannon ⁠— no Elite TMs required ⁠— so stock up now while you can! There’s nothing in the announcement indicated Piplup spawns will be boosted during December, so scarf them up NOW.)

But outside of those two, there’s a decent chance you haven’t seen ANY of the other Water starters in PvP. But… why is that?

Mostly, it’s a matter of their moves.

Let’s start with Blastoise. It has a decent array of charge moves, with Hydro Cannon, of course, Ice Beam for handy coverage (especially against Grasses), and big closers Skull Bash and Flash Cannon to choose from. And, as noted, it has plenty of bulk to REACH those big moves too. So why don’t we see it more in PvP?

The biggest letdown is the fast move options. Blastoise is left with just Bite (no STAB and terrible energy gains) and the perfectly average Water Gun (average 3.0 for both damage per turn and energy generated per turn). Water Gun is okay, but doesn’t deal big damage like Empoleon’s Waterfall or race to charge moves like Swampert’s high-energy Mud Shot.

And therefore Blastoise, despite its bulk, just doesn’t do anything particularly special in Great League. Out of its sheer thiccness it can outlast Umbreon and Drifblim, unlike Empoleon and Swampert, but otherwise it’s just inferior in Great League, unable to beat things those two can like Skarmory (even if Blastoise has Ice Beam), Lapras, Hypno, and Alolan Ninetales (and others like Machamp, Sableye, Politoed, Toxicroak, Pelipper, Defense Deoxys, and others that at least one of Empoleon or Swampert can take down).

It’s serviceable, but inferior to not only the more widely used Water starters, but also things like Lapras that just do what Blastoise wants to do, but better… and even has the same Ice Beam or Skull Bash that Blastoise uses. It’s not that Blastoise is bad, because it really isn’t… it’s just overshadowed.

Good news, though: Blastoise works out much better in Ultra League, with a record comparable to Lapras and Swampert, and even a hair better! In truth, they all have their own uses:

And it continues to stand tall with shields down, again shining just as brightly as Swampert (and leaving Empoleon in the dust now).

While this analysis makes it apparent why Blastoise can’t escape the shadows of other Waters in Great League, I gotta ask: why don’t we see more Blastoise in Ultra League? By these metrics, we really should!

I think this event is a great opportunity to grind for Squirtle XL Candy and build yourself a Blastoise XL… and do keep in mind that you don’t have to have a #1 IV one to still do very, very well. Go and catch ’em all!

(All that said… Waterfall Blastoise when, Niantic?)

Unfortunately, I don’t think I can make as good as case for the others. I already tried for Samurott, rather extensively, when I wrote up a whole article for its Community Day back in September.

In short summary, it comes with Fury Cutter and Megahorn that allows it to solidly pressure Psychics and Darks and sometimes, with a little luck, turn the tables on opposing Grasses. But in both Great and Ultra Leagues, it’s more curiosity than open meta threat.

That said, I have faced a handful down in GBL over the last couple months and got absolutely shredded by a couple of them. At least in the right limited/Cup metas, I can still see Sammy doing some good things. And like Empoleon, you’ll be able to evolve it with Hydro Cannon again in December without needing Elite TMs, so this isn’t a bad opportunity to look for a really good one or two!

Feraligatr is even harder to trump up. In the earlier days of Ultra League it was scary with Ice Fang, but after a much changed meta, those days seem long past. And it’s never really been all that intimidating in Great League either.

Crunch is nice for wide neutral coverage, but it doesn’t benefit from any handy subtypings (like fellow Waterfall user Empoleon’s Steel) and is frankly just too slow… the only fast move that has even average energy generation is Water Gun, which is a Legacy move!

And speaking of falling hard, back to Greninja. And man oh man does it fall hard in Great League. in Ultra League it can at least utilize Feint Attack to operate as a semi-decent Dark type with a handy Water side (allowing it also topple stuff like Charizard and Talonflame), so there’s that.

You might be tempted to think “but it doesn’t have Hydro Cannon yet… surely that will help it!”, and you wouldn’t be wrong. But in both Great League and Ultra League, while Cannon is clearly better, even it isn’t enough to make Greninja worth using.

Maybe the promise of getting signature move Water Shuriken in the future will salvage it, but if Samurott’s underwhelming Razor Shell is any indicator, I’m not overly optimistic.

So there we go. Not TOO heavy a lift today… just wanted to pass through the current Water starters and their basic pros and cons in PvP, and why you do (or don’t!) see them in battles today. Just to review, here’s our summary.

And that’s it! While this is certainly not a PvP-centric event, it’s still a good time to grind for candy (regular and XL) and build up your existing stock of Water starters or build some new ones, and specifically to prep for December Community Day with Piplup and Oshawott. Take advantage and you can come out on the other side with some potent new toys!

Continued thanks to my PvP friends, local and around the world, who have lent their own ideas and suggestions over the last three years of PvP play and nearly 300 articles of PvP analysis, and helped teach me to be a better player and student of the game.

And thank you for reading… I appreciate your attention and encouragement. Stay safe out there, and good hunting next week!

Shiny Pokémon to Look Forward to in Pokémon GO: Part 2