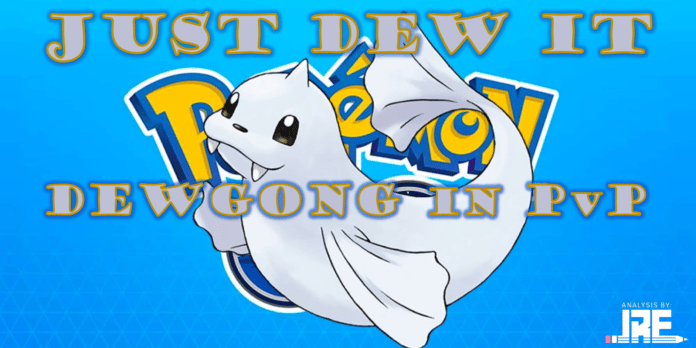 Because as noted in the GBL “Interlude” Season 11 review, on Saturday, March 5th, only from 11:00 a.m. to 2:00 p.m. local time, Seel is guaranteed to be a reward encounter in GBL (and “may be shiny”). But more importantly, during that short three-hour time period, if you evolve a Seel, you will end up with a Dewgong that knows BOTH of its fabled Legacy moves: Ice Shard and Icy Wind. No Elite TMs necessary! This is a fantastic opportunity for those lacking a PvP Dewgong to get one, and for those that already have one to get another (or several!) to upgrade or perhaps have some great trade bait, at least.

So no fancy intros this time, no dilly-dallying. I’m in the middle of a couple other projects I need to get back to anyway, so let’s get straight to it as we put Dewgong… under the lights!

And as has been my new pattern of late, let’s start by getting our TL;DR right up front!

So here we go, the fabled PvP legend itself. What makes Dewgong SO good, so desirable, in PvP?

It starts with the stats. Dewgong is not quite as ridiculously bulky as things like Azumarill, Bastiodon, Umbreon, Cresselia, Registeel and true chonks like them, but make no mistake about it: it is VERY bulky. Bulkier than fellow Water/Ices Lapras, Walrein, and Sealeo, bulkier than Medicham and Jellicent and Skarmory and Greedent and Noctowl and Meganium and many others, and roughly AS bulky as Tropius and Galarian Stunfisk. It’s rightly considered a tank in PvP.

And that’s good, because the typing isn’t great. I’ve mentioned before how bad a defensive typing Ice is (weak to Fire, Steel, Rock, and Fighting, and resisting ONLY Ice), but pairing Water with it helps out quite a bit, turning the Fire and Steel super effectiveness to merely neutral damage instead, doubling the Ice resistance, and adding a resistance to Water. Unfortunately it DOES inherit Water’s own vulnerabilities to Electric and Grass, but of course Grass types don’t usually want to tangle with Dewgong’s oppressive Ice damage if they can avoid it. Dewgong has flaws, no doubt, but overall its bulk largely helps mask the weaknesses associated with its typing.

Probably none of this is a big surprise though, so let’s keep it moving!

I think everyone and their grandmother understands by now that you want Legacy Dewgong for it to be a true consideration for PvP, and here’s where it starts. As you can tell just by looking at the fast moves all put together, Ice Shard is clearly the best. It blows the other two moves in terms of energy generation while dealing sufficient (albeit average) damage. Frost Breath will deal more fast move damage overall of course, but what makes Dewgong really work it how spammy it makes its own charge moves with the high energy gain that only comes from Shard. Everyone talks about Ice Shard being a must, and if you didn’t understand why before, hopefully this makes it clear.

And the other critical, Legacy component is, of course, Icy Wind. Without that, even with Ice Shard (but especially without 🥶), Dewgong is just not worth using. Not only is Icy Wind Dewgong’s cheapest charge move, but running JUST Wind and Ice Shard make Dewgong a force in Great League, no other moves required. With just those two Legacy moves, Dewgong beats every Flying type by Zapdos and Shadow Ho-Oh, every Ground type but Steelix, Quagsure, and sometimes Galarian Stunfisk, the vast majority of Grass types (including Trevenant, Shiftry, Shadow Abomasnow, and Meganium), along with many huge names like Umbreon, Hypno, Sableye, Wigglytuff, Alolan Ninetales, Drapion, Greedent, and even Azumarill! (And with excellent PvP IVs, even Venusaur as well.)

And that commanding performance only blossoms further the deeper you go into a match. In 2v2 shielding, such names as Galarian Stunfisk, Lickitung, Venusaur, Froslass, Cofagrigus, and Abomasnow move into the win column. Even potentially Vigoroth and Alolan Marowak, depending on IVs. And that’s with Vigoroth pounding away with super effective Counter damage and Alolan Marowak resisting all of Dewgong’s Ice damage!

But at the other end of the spectrum, with shields down, things do fall off a bit. Icy Wind doesn’t really have killing blow type power, so things like Meganium, Azumarill, Greedent, and even Skarmory start to slip away.

So that’s where the second charge move comes in. And everybody’s first thought is typically Water Pulse. It makes sense on the surface: Water provides nice coverage versus Fires and Steels and opposing Ice types that can all be problematic at times. But Water Pulse is a terrible, terrible PvP move. It deals only 10 more damage than Icy Wind while costing 15 more energy, and comes with no status modifying effects. It’s so poor that trying to force its use, even with shields down, actually leads to a worse performance overall, dropping Hypno and even Ice-resistant Alolan Ninetales (both are wins with straight Icy Wind), and maintaining wins but performing much worse versus things like Whiscash, Azumarill, Umbreon and others. Worse, Water Pulse does NOT bring in any notable new wins… not Alolan Marowak, not Galarian Stunfisk (nor any other Ground or Steel types)… nothing.

Now, Water Pulse, even as bad as it is, DOES bring in a couple new wins in 1v1 shielding… Mew and, finally, Alolan Marowak (albeit by the skin of its teeth 😬… and even then IVs can muddle those results 🥶). But note that here again, trying to “force” Pulse can lead to disaster elsewhere, such as versus Sableye (where straight Icy Wind wins).

But I propose, as I do basically every time I write about Dewgong in a meta article, a better way. And it’s right there in front of us. Forget about the mostly-theoretical coverage provided by Water Pulse, and double down on straight, overpowering damage: with Blizzard.

Sticking with 1v1 shielding for the moment, Alolan Marowak does unfortunately remain a loss without (the unreliable win sometimes provided by) Water Pulse, but Mew becomes an even more solid win, and look at the other new additions to the win column: Galarian Stunfisk, Abomasnow, Ferrothorn, Shadow Hypno, and Cofagrigus. And other than A-Wak, NO new losses. (Meganium shows as a loss but remember, all you need there is Icy Wind).

And the difference with shields down is astounding, Azumarill, regardless of moveset, flips to a win. So too do Skarmory, Sylveon, and Cofagrigus. Also within reach now, with excellent PvP IVs, are things like Greedent, Froslass, Mew, Stunfisk, and Venusaur. None of that is even possible without Blizzard.

Even in 2v2 shielding, Blizzard is a notable upgrade. Water Pulse DOES upgrade Dewgong’s performance over Icy Wind alone, but every single new win it brings in (Politoed, Hypno, opposing Dewgong, and even Alolan Marowak), Blizzard matches. (Yes, Blizzard beats A-Wak in 2v2 shielding!) And what’s more, Blizzard also takes down Cresselia. Not even Water Pulse can do that.

So hopefully I’ve managed to convince you by now that not only is double Legacy Dewgong fully worthy of its reputation, but opened your eyes to an even higher ceiling than many limited themselves to by defaulting to Water Pulse.

Now let me open your eyes just a bit further. You may have wondered why I posted Dewgong’s seemingly lackluster Ultra League stats earlier. Well… here’s why. 👀 But again, it only reaches top potential with Blizzard. Water Pulse does carry some wins by itself, most notably Talonflame and Scizor. But Blizzard again matches it in all other ways, and adds on some familiar names like Abomasnow (normal and Shadow), Sylveon, and Cofagrigus, plus some new-in-Ultra names like Swampert (normal and Shadow), Shadow Snorlax, Granbull, and Alolan Muk (with Poison Jab… Icy Wind is enough for Snarl A-Muk). Now, I’m not saying you necessarily SHOULD power up a Dewgong for Ultra League use — after all, that’s a LOT of hard-to-get Seel XL candy — but what I AM saying is that you happen to have a hundo Seel sitting around collecting literal dust… evolve it during this event! Because at least then you have the option down the road. Again, Dewgong is pretty future-proof, even in Ultra League. Don’t mistake its sub-2300 CP as an indicator of its performance. It’s one of the better performing underpowered things to throw into UL.

So I already tried to sum all this up at the start of the article, but as one final reminder: evolve any decent Seels you can during this special, very limited-time event. Prioritize good PvP IVs (lower Attack, higher bulk) for Great League, and I’d say evolve any 93%+ IVs for potential future Ultra League use as well. (Even something like a 14-13-14 still seems viable.) The window sounds like it’s only three short hours, so DO. NOT. MISS. OUT.

Alright, that’s it for now. Now I head back to my other ongoing projects, and you can head on to GO Battle Day and some fun with Seel and Dewgong. Until next time, you can always find me on Twitter with near-daily PvP analysis nuggets or Patreon.

Have fun battling, folks. Catch you next time, and stay safe out there, Pokéfriends!