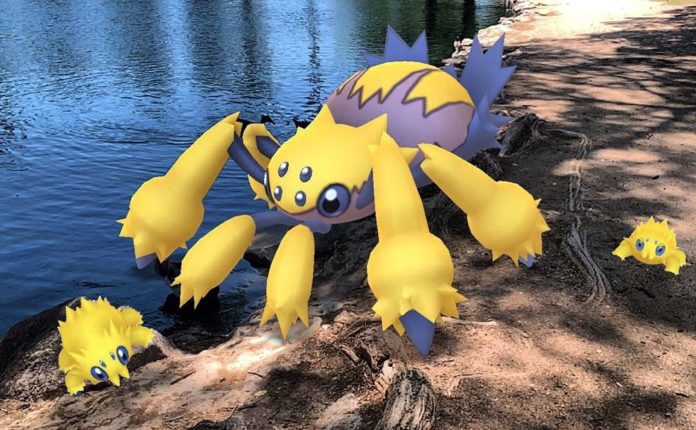 Kicking off our brand new weekly article series, “Spice Pick of the Week”, we’re kicking it off with Galvantula, the Bug / Electric type Pokémon. Galvantula has fantastic coverage in the Great League meta and is the definition of a Spice Pick. It can beat several top tier picks including Azumaril, Registeel, Skarmory and Toxicroak.

With the “Buddy Up” event that recently passed, getting ahold of a Galvantula was easier than ever. The pre-evolution, Joltik was spawning in abundance which would normally be a rare sight to see since its spawn rate is normally extremely low.

This electric spider can boost your GO Battle League rating to great heights with its unexpected damage and versatility.

Galvantula has a max CP of 2206 which makes it fit well for the Great League. Its stats are as followed.

Taking a look at Galvantula’s stats, we can see clearly that a great deal of its potential lies in its Attack stat. It has the ability to dish out massive amounts of damage against several matchups and can leave your opponent defenceless. If they are not equipped with a suitable counter, Galvantula can carry your team composition to victory.

Galvantula has 4 resistances being Electric, Fighting, Grass and Steel with only 2 weaknesses from Rock and Fire types.

Some Pokémon to watch out for when using Galvantula in the Great League will be Charizard, Flygon, Bastiodon, Alolan Marowak and Typhlosion to name the most common counters.

Volt Switch is a powerful Electric type move with STAB (Same Type Attack Bonus) which generates energy quickly. Galvantula also has access to Bug Buzz helps which is a solid answer towards Grass types that would resist Electric type attacks.

The highest DPS moveset that also has the most versatility is to run Galvantula with Volt Switch as the Fast Move and using Discharge and Bug Buzz for the Charge Moves.

In a 1 shield situation, Galvantula can even take on Charizard, one of its counters with the use of its Electric type moves which are super effective. With this being said, Galvantula excels at being a safe Lead Pokémon. Current top tier leads in the current Great League meta can be beaten by this electric spider.

Galvantula has the ability to pressure your opponents from the start of the game since Volt Switch has high EPS, which can cause early shield uses from your opponent or even promote an early switch lead advantage.

Cross Poison and Energy Ball are its other 2 alternative Charge Moves. While these moves do have their own unique uses in battle. They are not recommended when using Galvantula. The main reason trainers would prioritise Bug Buzz over Cross Poison is that Bug Buzz has more coverage in the Great League meta.

When using Bug Buzz, you have the option to deal super effective damage against Pokémon such as Venasaur and Defence form Deoxys which are used immensely in the Great League.

Pairing Galvantula with Pokémon that can cover its weakness’ is crucial when using it in the GO Battle League. Pokemon such as Azumarill and Registeel are meta for a reason because of their durability and all-round use. These 2 Pokémon synergise well with Galvantula as they have coverage against most of the meta and can be a safe swap if paired with an unlucky lead matchup.

Oftentimes, lower rank trainers will panic swap when they see a bad lead situation. The good thing about Galvantula is that a lot of the time, there will be an opportunity to energy farm before swapping or even using an unexpected charge move on your opponent before using shields to protect Galvantula for later use.

Because of its low defence, Galvantula needs to watch out for Pokémon with exceptionally high DPS Fast Moves such as Charm and Dragon Breath users. Having a solid team to practice with while understanding Galvantula’s key matchups will be vital for climbing the ranked ladder with this beast.

In this format, trainers were only allowed to accompany Pokémon with the following typings, Bug, Poison, Normal, Ground, or Grass.

Galvantula was an underdog choice but surprisingly had the ability to take on several high-end picks in this format such as Golbat, Toxicroak, Bibarel and Drapion. Its access to an Electric and Poison type Charge Move made it possible to be able to be an unexpected and deadly pick if played correctly.

Its main weakness was due to the fact that Flygon, a popular pick in this format, roamed around bullying Pokémon with its extremely high energy farming potential with Mud Shot. Pairing this move with Dragon Claw, an already low energy cost Charge Move, made it a nightmare for Galvantula to deal with if not equipped with Pokémon in the back to help deal with this situation.

The Voyager Cup prompted trainers to chaperone Pokémon from each respected region in the main series games, along with a wildcard pick of their choice. Galvantula was an off-meta spice pick in this tournament, bringing to the table versatility that many Pokemon lacked.

Its main issue was dealing with Pokémon such as Melmetal, Whiscash, Bastiodon and Flygon. Although paired with a mud boi (Mud Shot user) such as Marshtomp, or Stunfisk to help deal with its main counters, Galvantula could compete well in this meta.

With such a vast selection of Pokémon to choose from in The Voyager Cup, deciding on a team composition to deal with the unexpected arsenal was key for achieving victories in this format. Galvantula crawled its way into the meta and could deal with most of the top tier picks such as Azumarill, Meganium and Registeel.

The Silph Arenas ongoing tournament, The Forest Cup consists of trainers providing a team of 6 with only Grass, Bug, Water Fire, or Electric being permitted.

Galvantula is ranked as the 4th best Pokémon in this format on pvpoke.com due to the fact that it can beat most Grass and Water types in the meta. Its main counters are the mud bois such as Swampert, Stunfisk and Seismitoad.

Positive matchups to look out for are Mantine, which has a double weakness to Electric type moves, Kingdra, Meganium and Azumaril, all of which are popular picks in this tournament.

Another alternative to using Volt Switch is to use Fury Cutter on Galvantula. Depending on what your team composition is lacking, Fury Cutter can be a better Fast Move in certain situations. This is why Galvantula has so much potential in this format and is such a high-end pick in The Forest Cup. 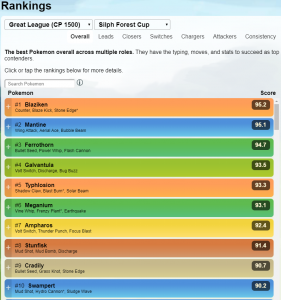 Whether you’re into GO Battle League, Silph Arena tournaments or both, Galvantula has something to offer for most trainers. The fact that it can carry a team composition to victory in whatever format it may be, means that Galvantula is highly recommended to invest in.

Its main downfall is again, its low defence, however, with enough practice and knowledge of certain matchups and situations, this weakness won’t be too big of an issue for an experienced player.

We will be continuing this series each week with an unexpected and exciting Spice Pick to talk about, diving into their strengths, weaknesses’ and the potential they have within the game. Be on the lookout for next week’s Spice Pick of the Week!