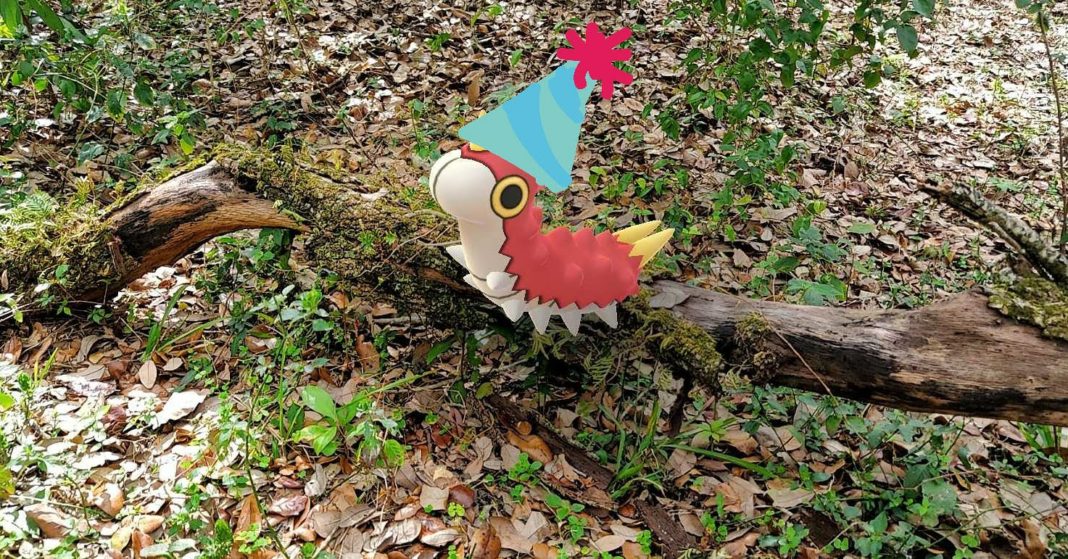 As Pokémon GO pushes AR to the furthest extents, it seems only natural that Trainers have learned a few new skills when using these tools. This means not only catching Pokémon in AR modes but also taking up a more recreational pass-time; AR Photography!

Throughout March, Trainers went out to photograph Pokémon in the wild. These Trainers have not only taken outstanding photographs but have also brought back stunning stories from their adventures. The AR Photo Showcase is a place where these Trainers can show to the world what they have accomplished, one photograph at a time.

To start with the change to themed showcases, we decided to celebrate using the ‘Party!‘ theme. Let’s see what our photographers managed to come up with!

In this segment, we take a look at the AR Photographs and stories submitted by your fellow Trainers.

The Belle of the Ball

“This photo has been one I have always had in my head but never thought I’d be able to get as Gardevoir doesn’t spawn wild. The staircase is at my local shopping center, and I’ve always just imagined her walking down those steps. When GO Snapshot released, I was so pleased and knew that this was one of the first pictures I had to take. I probably chose the worst time to try to get this picture as it was a busy Saturday evening and I wanted a clean shot without other people in the background. This picture, therefore, took me 45 minutes and about 50 individual shots to get the perfect snap, but for a picture that I’ve had in my head for so long it was worth the wait to see it realized.” 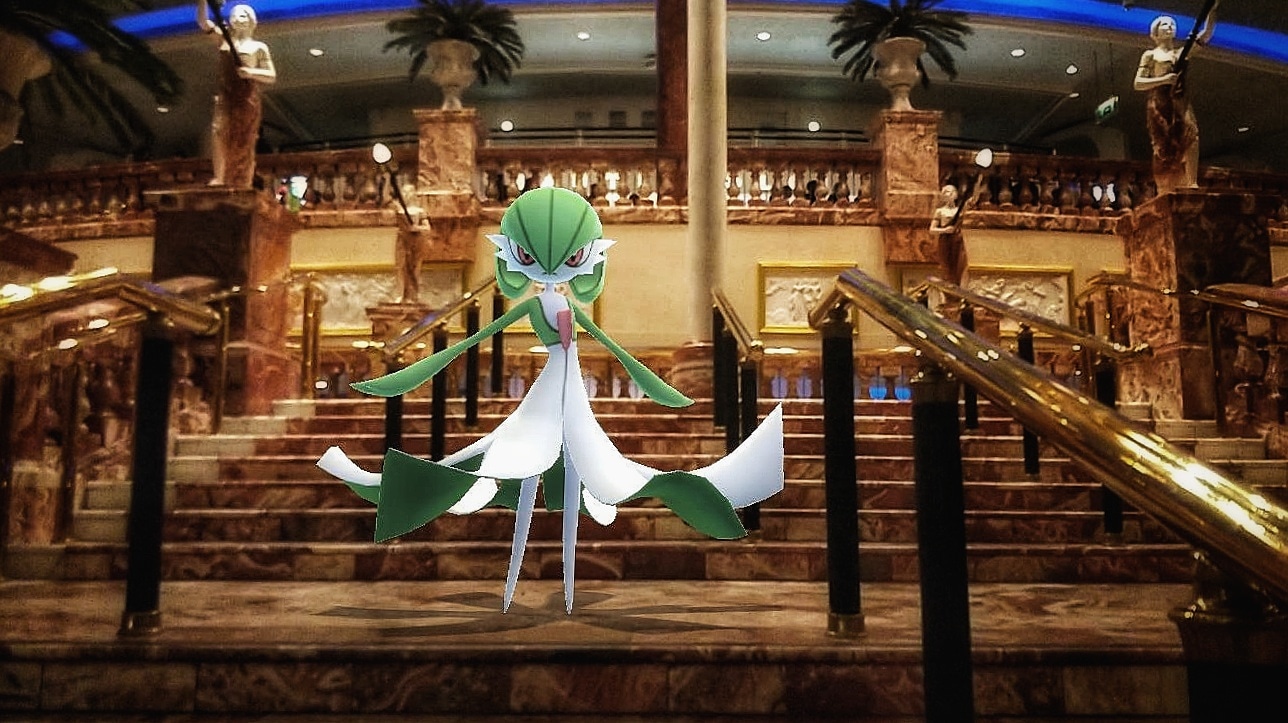 Side Note: I love the angel that Azzergal used for this photo, instead of going with a typical party idea, she went with something a bit more elegant, ‘The Belle of the Ball.’ How genius and clever – Hub Writer Josh Provines

“Since Niantic doesn’t seem to have plans to release the fan-favorite party hat Wurmple, we made one ourselves! This was merely an average Wurmple until we showed him the way to party. Excellent! This photo wasn’t meant to be taken seriously, but seems to be the perfect candidate for this month’s theme.” 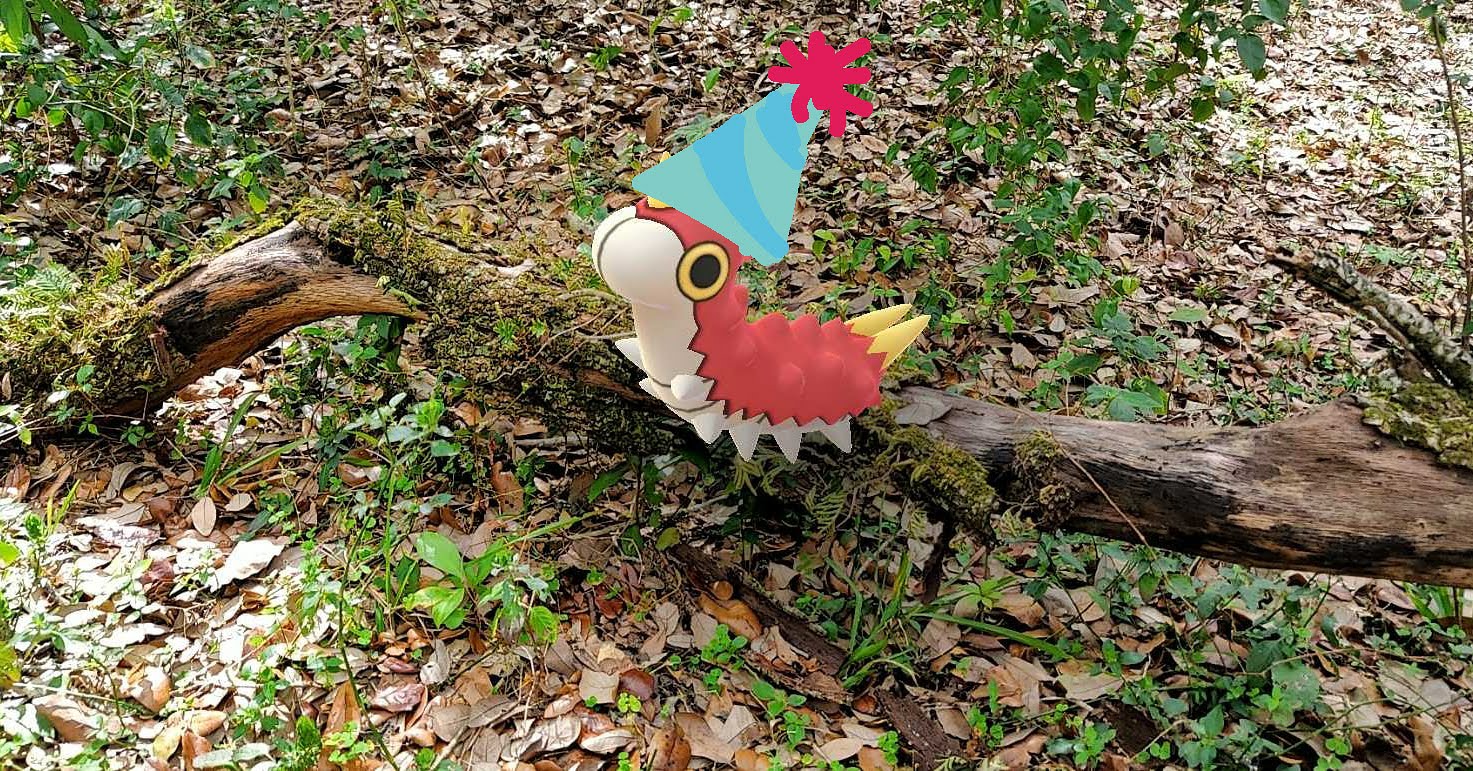 Side Note: This is such a simple shot, such a simple concept, but done so well. When I originally proposed the ‘Party!’ theme, I had imagined someone would post something like this, and even though it was crudely drawn on, I think it only adds to the character of the photo – Hub Writer Josh Provines

“I Enjoyed a weekend with my friends playing music and dancing all night. We were glad to have Loudred with us. GO Snapshot was a fun tool to use at our party, but most of the shots we took might be a little too funny to share here. While my friends were DJing some house music, I got this idea, and it came out great.” 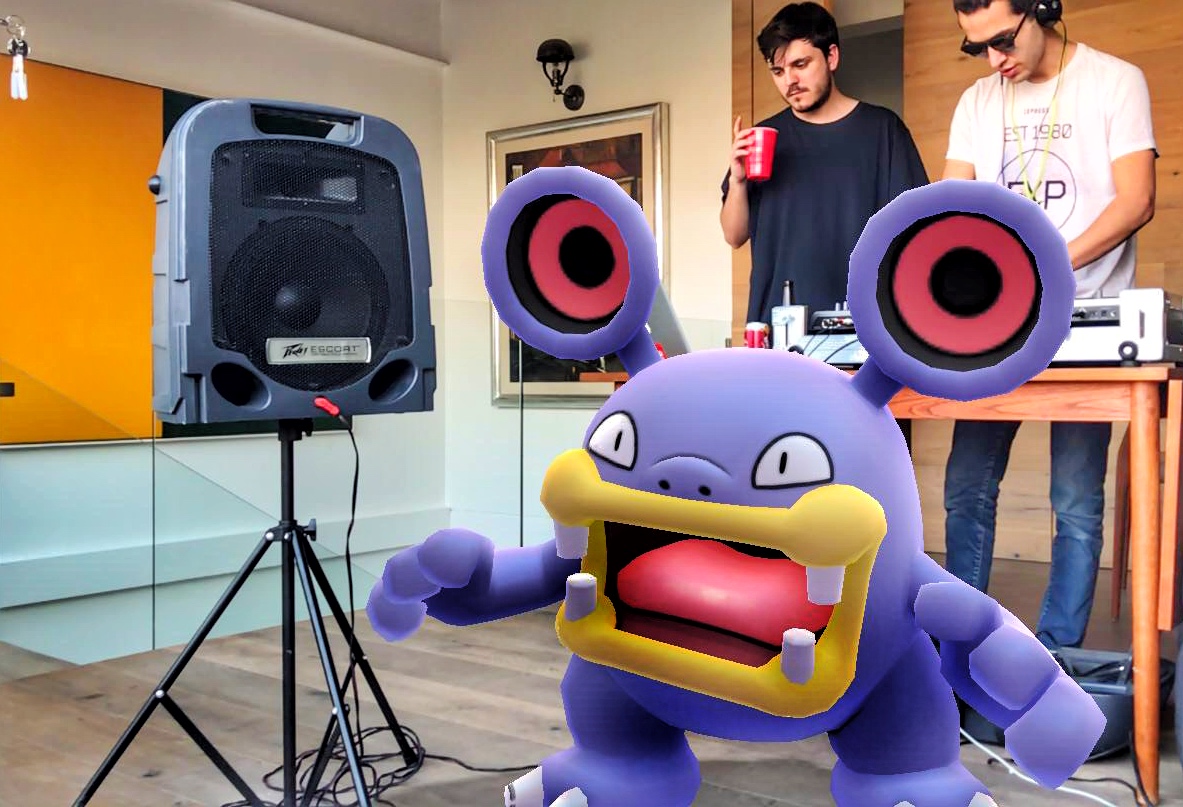 “This past weekend one of my roommates and a friend from the group had coinciding birthdays. So they decided to make a whole weekend party to celebrate. Unfortunately, the party celebrations ran late into the night, and I had to work early both mornings. Luckily, I let my Jigglypuff out of his Pokéball, and his Sing attack was able to put me to sleep so I wouldn’t be groggy in the morning! I’m also grateful he didn’t have his famous marker…” 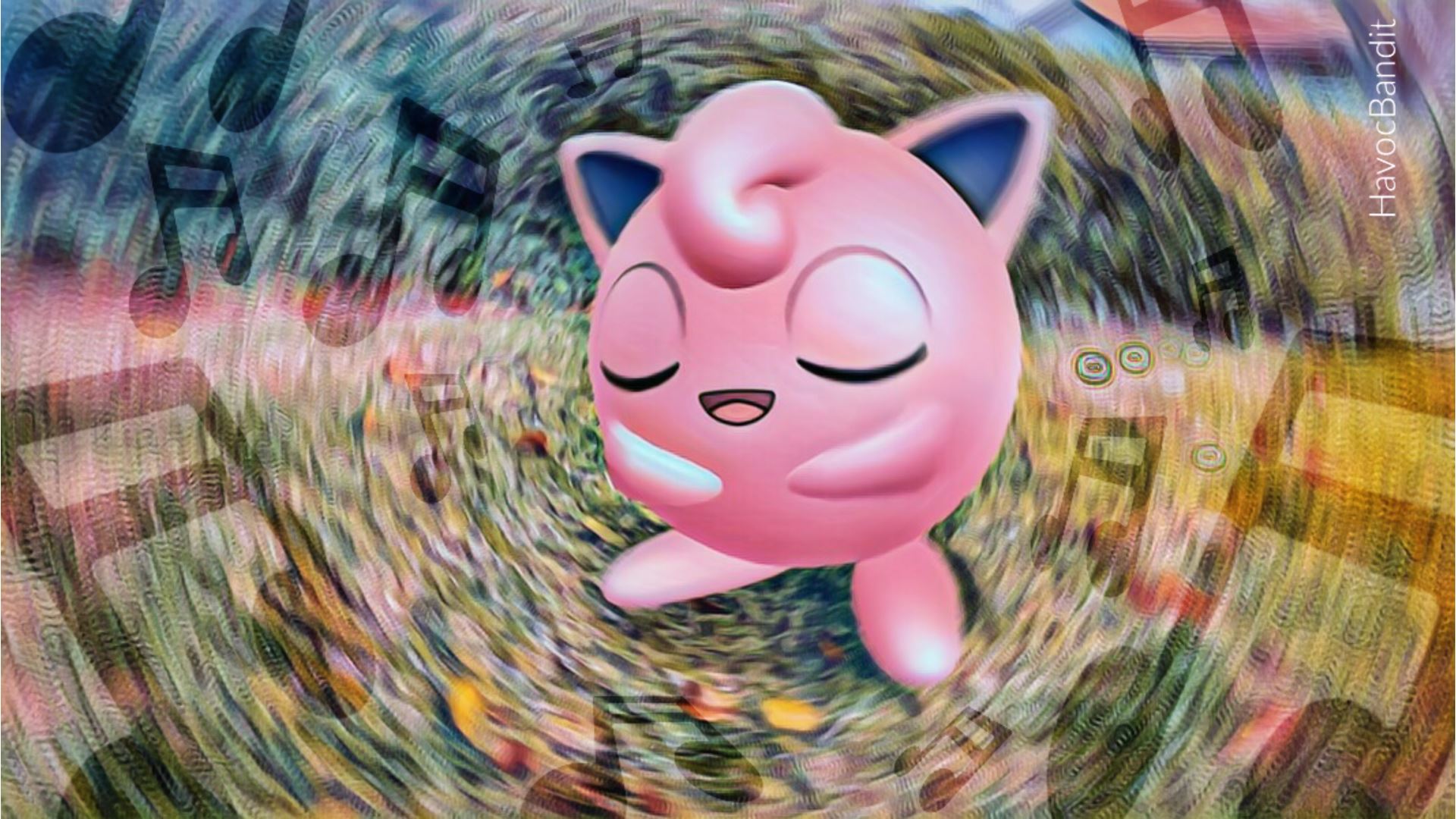 “This photo was taken to be displayed with the Trainer card “All Night Party.” The community has rallied together to throw a virtual 18th birthday party for wildcatsyd (on 3/26), and this is our way of trying to make her day special. Combining one of her favorite Pokémon, favorite colors, and warm birthday wishes, made for an awesome shot that we hope makes this party one to remember! #wildcatsydbirthday” 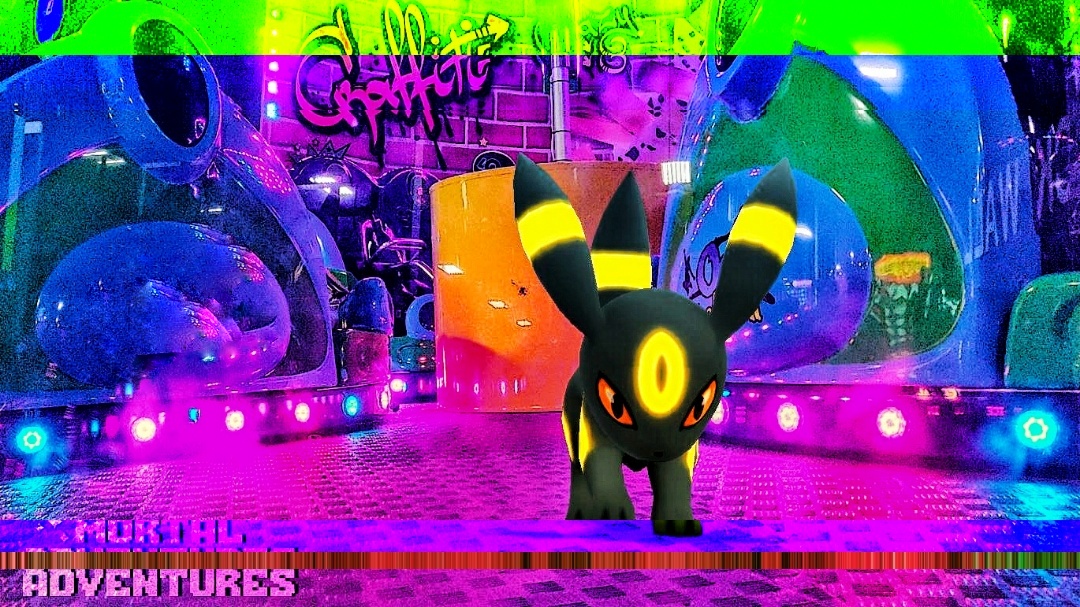 “We participated in celebrating Sydney’s birthday on March 26th with this picture. Her mother helped organize a huge shout out to her and told us what her favorite Pokémon were. I chose Geodude and went to buy some birthday balloons, as this idea came to mind I got super excited. Today we posted it on the GO Hub Showcase (March 25th) and tomorrow is her birthday, so we don’t know her reaction yet, but I hope she loves it and enjoys her Pokémon GO themed birthday celebration with her. GO enthusiastic mom! If you’d like to see more pics from other creators made for this occasion, please visit #wildcatsydbirthday on Instagram.” 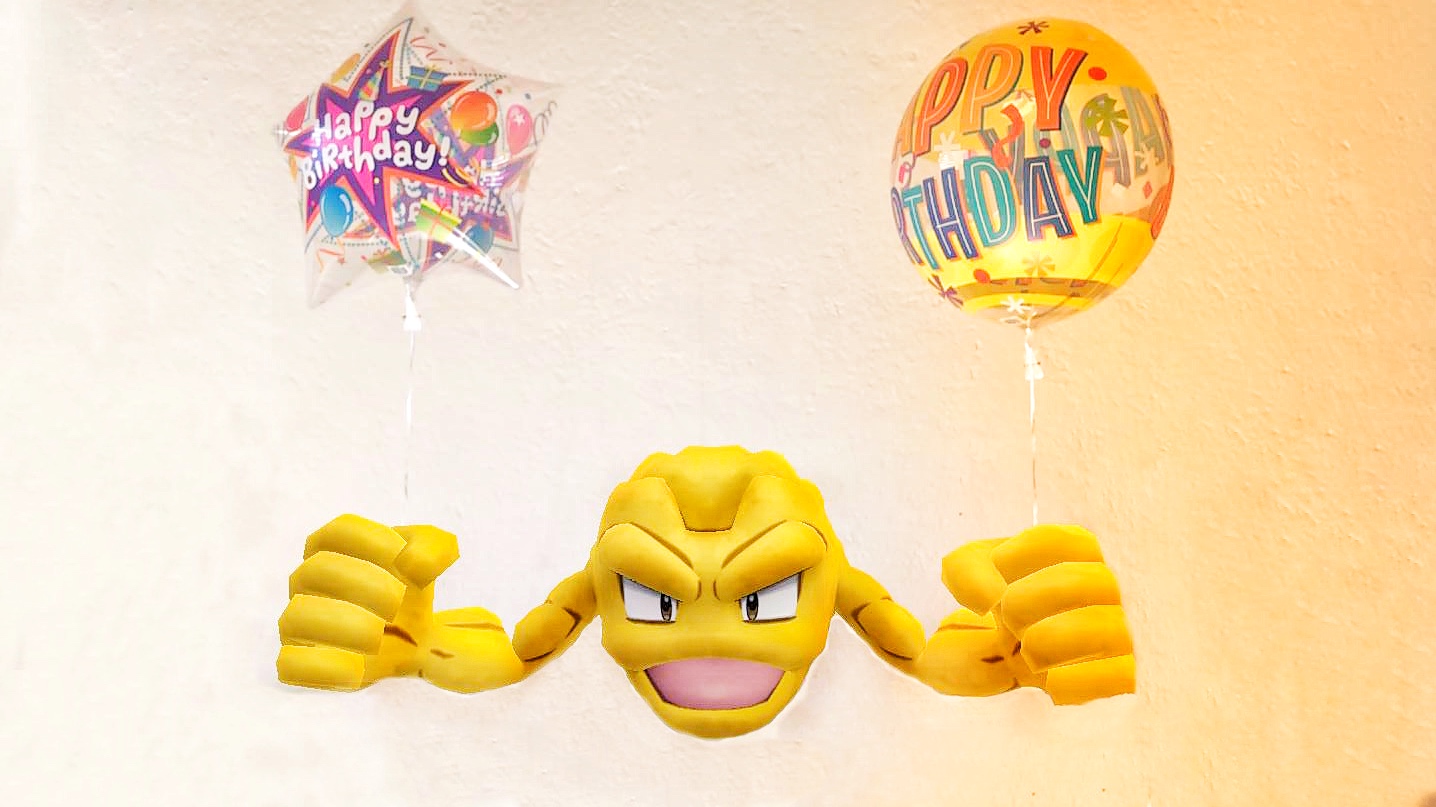 Side Note – Happy Birthday Sydney! I hope that the Showcase managed to take part in your birthday celebrations! – Hub Writer Josh Provines

Ain’t No Party Without a Hat

“I went to the store looking for some party supplies with my Wurmple for an upcoming party. We checked out some balloons, candles, and a ton of decorations. I had finally picked up all the supplies needed and was ready to checkout, but Wurmple just stood there motionless. Looking a bit dazed, it then said ‘Where’s my party hat?’.”

The Best of Birthdays

“Cubone lines himself up, bone in hand, ready to bash the piñata in front of him… to think that we had been scrambling for days to get everything ready. It came as no surprise when we asked him ‘What do you want your birthday to be about?’ and he gave the typical 6-year-old answer of ‘DINOSAURS!’. Once we knew that, it was my job to go search for a place to get the piñata done and in the meantime, his mom made him a dino skeleton mask for him to wear to his party. He was so ecstatic about the whole thing that I had to capture the moment right before he busted open that piñata and got his reptar-bars. In his own words ‘This was the best birthday ever!’.” 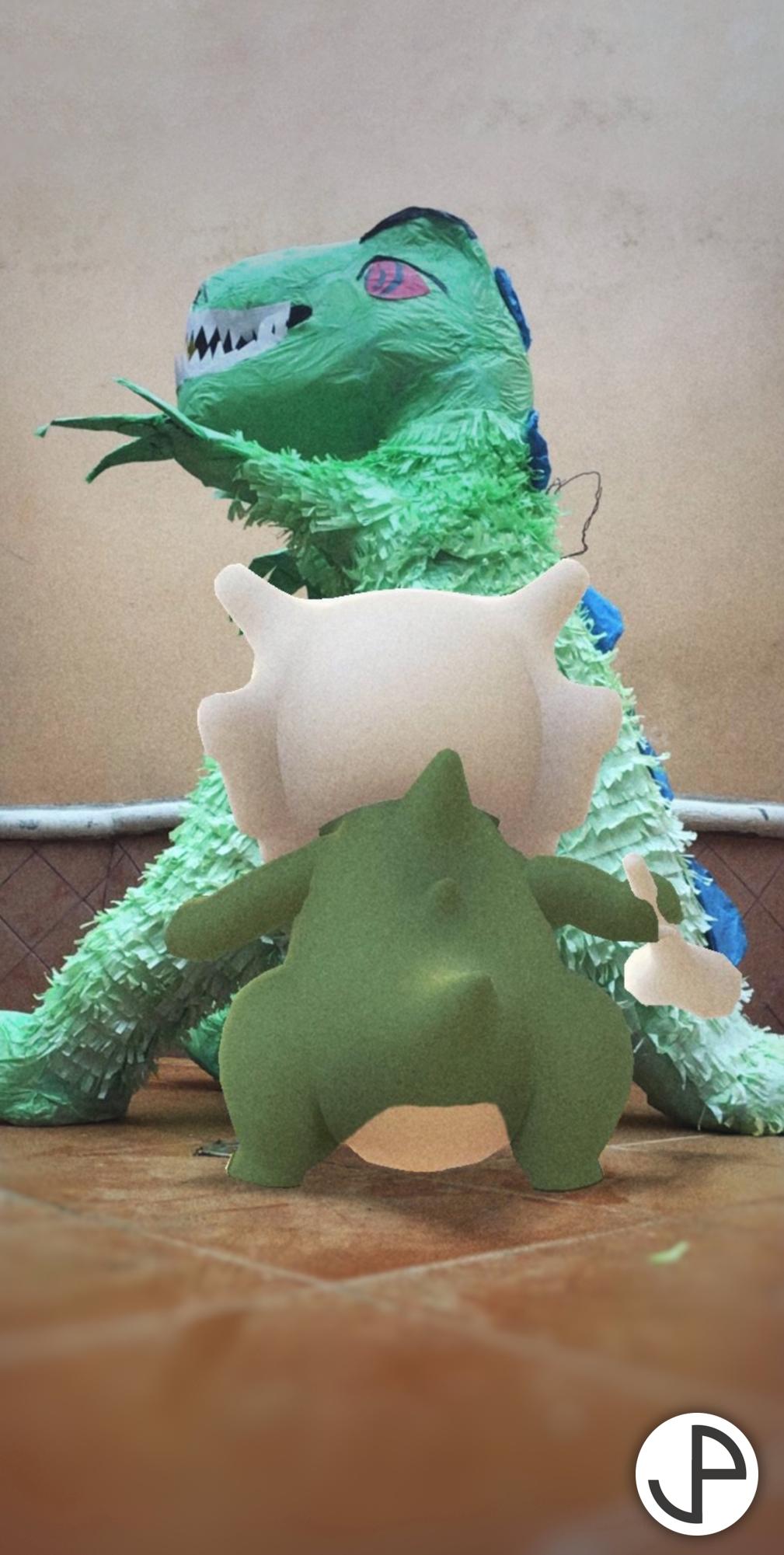 Side Note: I might be biased here but, I feel pretty proud of this photo since it’s the first time I have used props and techniques to get an AR Photo just right. I still had this joke piñata from my birthday, and I figured it fit perfectly with Shiny Cubone, and the story includes a little easter egg when it comes to ‘his mother’s skull’! – Hub Writer Josh Provines

Let’s get back to the basics of AR Photography; it is time to look at the raw, unfiltered, and unedited AR Photographs that your fellow Trainers have taken.

“Sometimes you don’t have to invite your fellow Pokémon, they just yell ‘Surprise!’ and show up… ‘gonna be an awesome party… y’all ready? Let’s dance!’. I wonder who else will show up, I invited all of them… wasn’t sure Smeargle would show up, but he never misses a party with dancing, of course.” 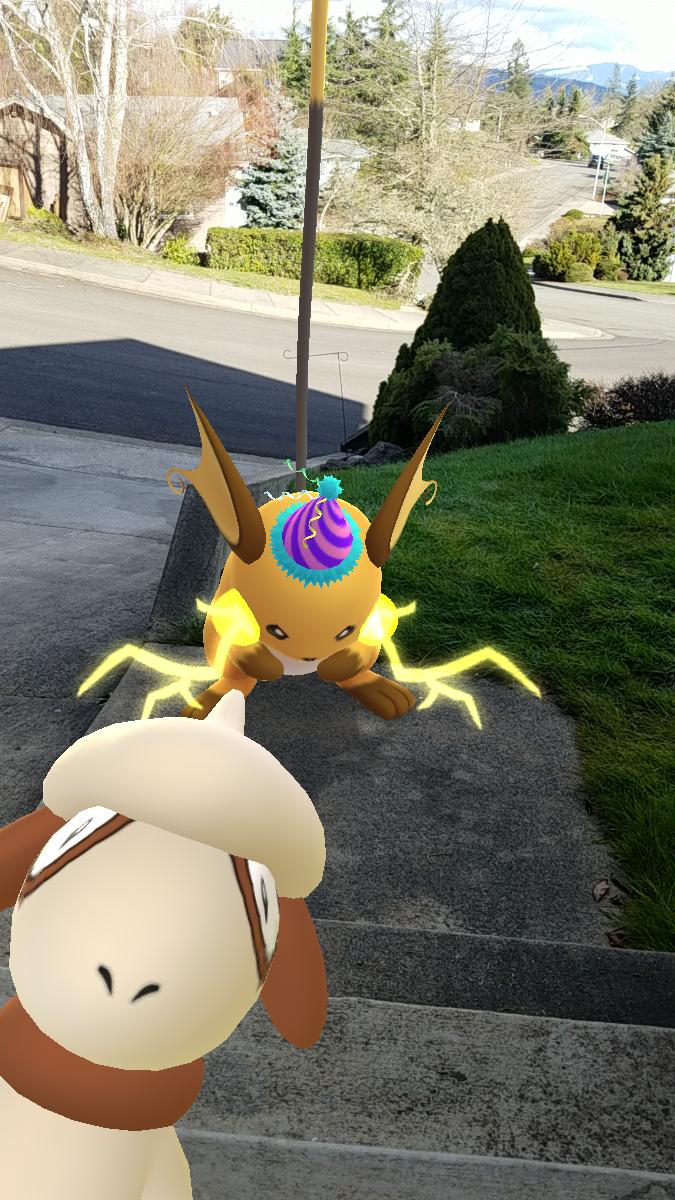 “In search of a great party, my friends and I headed out to a new club in town. There was lots of hype about a legendary DJ named Grumpig. Word was he could get everybody on the dance floor til closing. When we arrived, the place was packed. We could hear the tunes from the parking lot and couldn’t wait to get in! The place was mad krazy… That pig got us all moving with his signature moves – ‘Bring Home the Bacon’, and ‘The Pork Chop.’ If you’re lookin’ for a party, and you hear DJ Grumpig’s in da house, get out there and have a good time – That pig knows how to shake things up!” 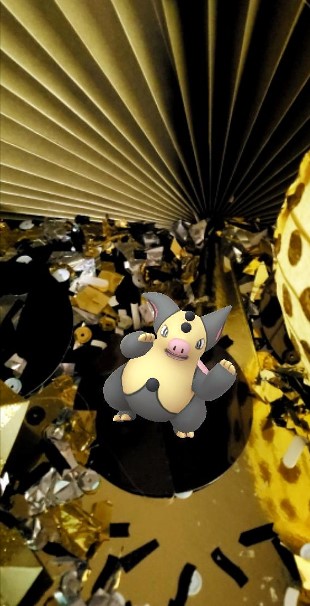 “I was looking through my Pokémon cards and was inspired by the work of Sachiko Adachi where they use clay models and 2D drawings in the background to create the image, so I decided to take an AR photo with my art as the background. This is the first one I’ve done, but hopefully, I’ll improve it in the future.” 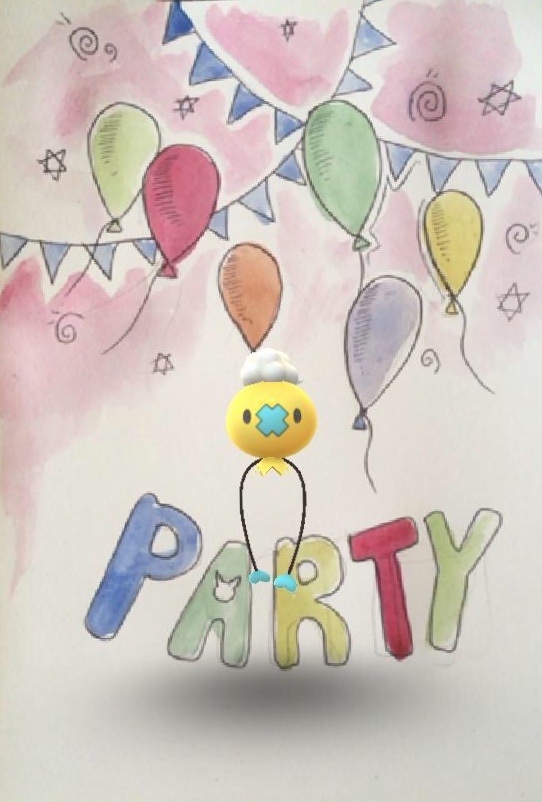 Side Note: I am absolutely in love with this photo. Period. It is such a great concept and idea that I would love to see ‘Doodlemon’ turn into an actual AR photo technique. Doodling your own backgrounds for your AR Photos may seem ridiculous, but Jordan managed to make something special out of it – Hub Writer Josh Provines

“My daughter baked a round cake in celebration of Pi Day on March 14. When Pikachu smelled the cake baking, she showed up in our kitchen, thinking we were still celebrating Pokémon Day and that the cake was for her. She was so excited about the cake, we decided to go along with it and told her the Pi my daughter wrote on the cake was short for Pikachu. We rounded off the celebration by letting Pikachu have 3.15149 slices of cake!” 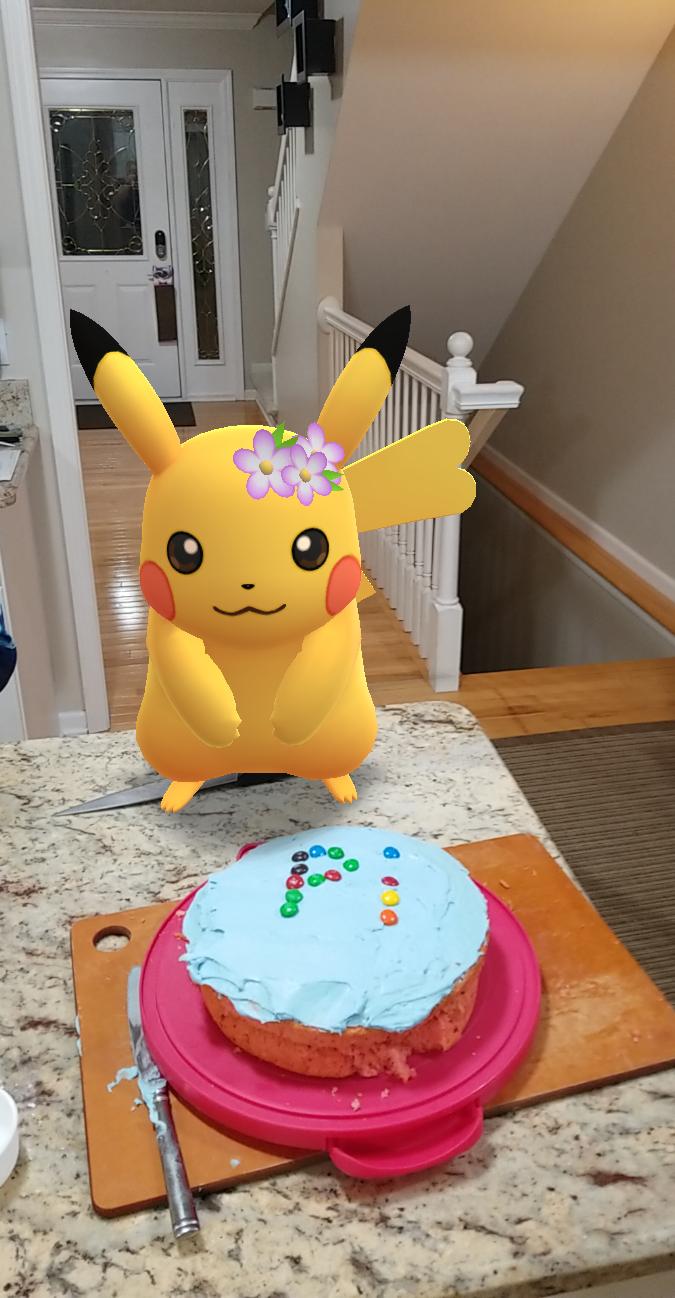 This segment highlights the Photographs taken by our very own AR Masters, those that we have deemed to be elite in the field of AR Photography.

“No party goes without good preparation! Jigglypuff is getting ready in the Dior boutique while doing a last photoshoot before she has to perform. The question is: Will the audience love her or will they just fall asleep by hearing Jigglypuff’s beautiful voice?” 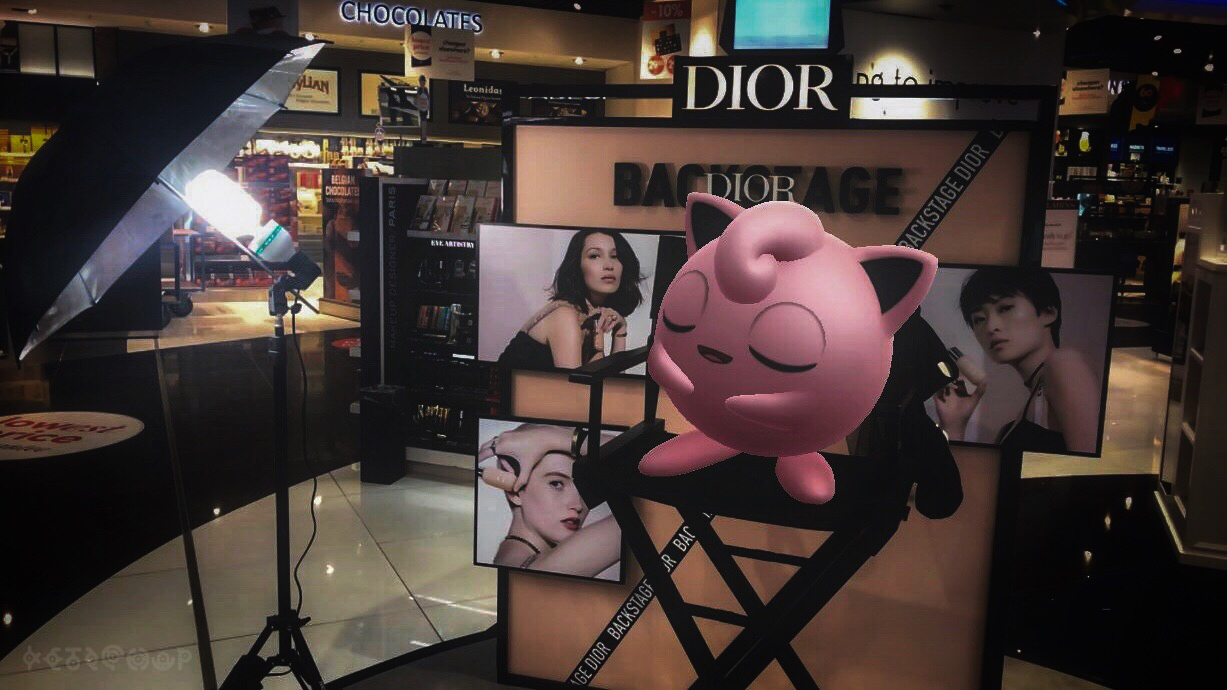 “I took this photo while driving around when I saw the sun starting to go down and the clouds wrapping around. Even though you can’t see it in the picture, it seemed perfect to take it in celebration of the first day of spring. I remembered the image of Wurmple in a party hat and couldn’t resist taking a photo like that.” 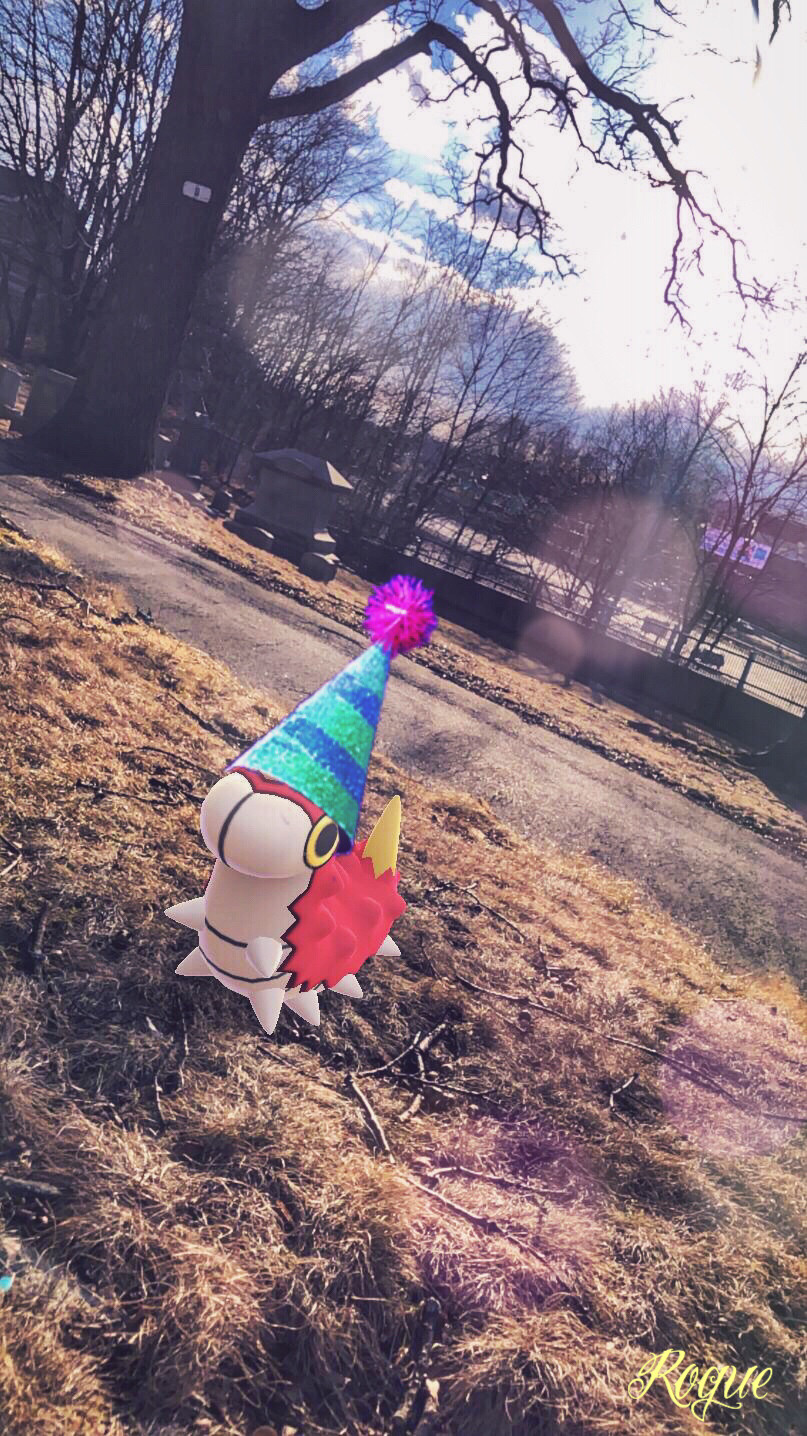 “While getting a beer after a job, I caught some cheers and yelling from a corner of the bar. I looked over to see a Spinda entertaining a group of people. Eventually, the crowd trickled out, but Spinda stayed for a few more rounds. I snapped this shot just before I left. I bet he had a pretty rough morning the next day!” 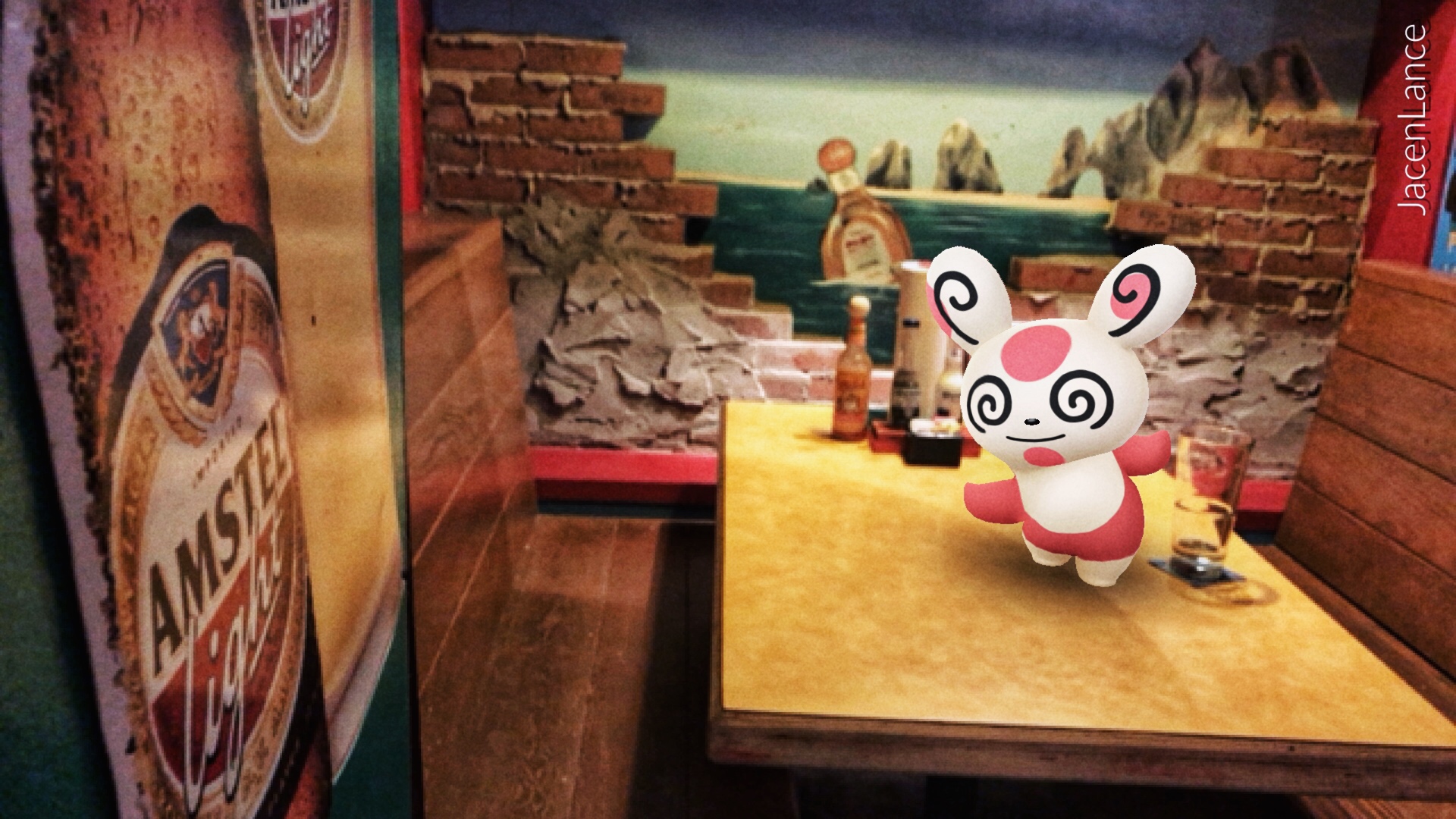 This segment is meant to show off the AR Photographs that didn’t quite make it for one reason or another.

After the recent change to themed entries, it came as no surprise to see how many photographers went along with the theme. It makes me happy to see how many submissions we are receiving month-to-month and the quality just keeps getting better. I’m looking forward to the coming months and all the new themed showcases have to offer!

The only thing I have left to say is “Thank You” photographers for supporting the showcase month after month, it has been the greatest of pleasures to be the one behind it, and I am incredibly grateful to everyone that has ever contributed anything to the showcase. Truly, thank you!

April’s AR Photo Showcase theme is Scientific! Maybe this means photographing Pokémon like Mewtwo, Ditto, or Porygon. Perhaps it means solving scientific anomalies such as the Unown, Meltan, or others. Or maybe, it merely means that you have an Aipom as your lab partner.

No matter which Pokémon you choose to photograph, get creative, be clever, and come up with something unique. Don’t forget, if your photograph doesn’t follow the theme, it won’t make the showcase!