How to AR: Rule of Thirds 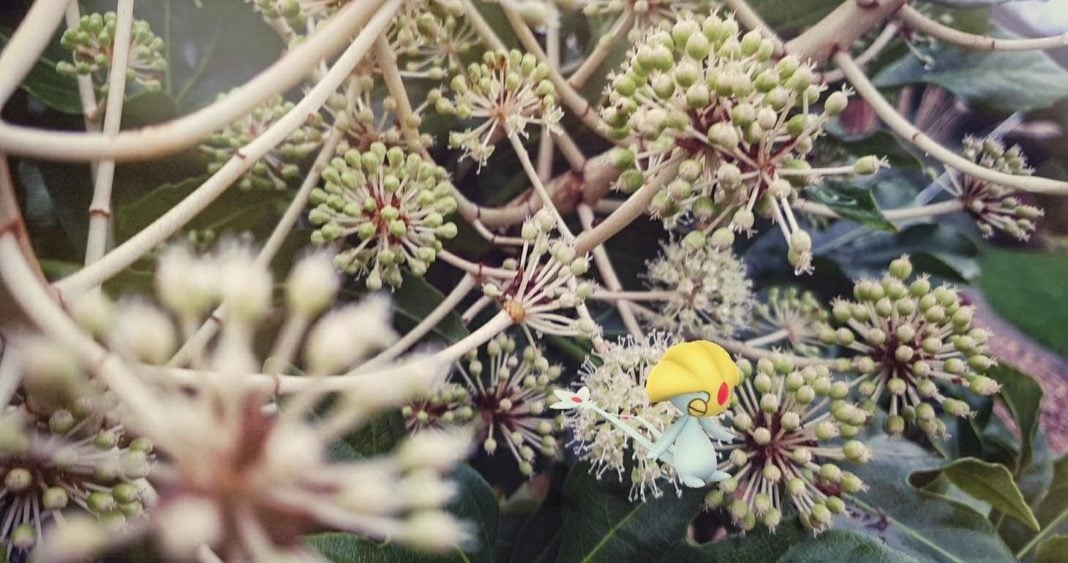 Today we are going to discuss a popular photographic technique that can help you create your best AR photos yet! It is one of the most well known photography rules, and one that can really help improve your art.

What is the Rule of Thirds?

The ‘rule of thirds‘ is a technique or set of guidelines that are used in the composition of photography to help make an image pleasing to the eye.

When composing your image, imagine that your image is split into nine equal sections, split by two horizontal lines, and two vertical lines. This splits the image into thirds, and having key parts of your image on those lines means the image works within the rule of thirds.

You may have noticed that your phone camera has the option to turn this grid on, or that when cropping a photo in editing software that this this grid also appears, as many phones now build this information into their cameras to help you compose your photos. 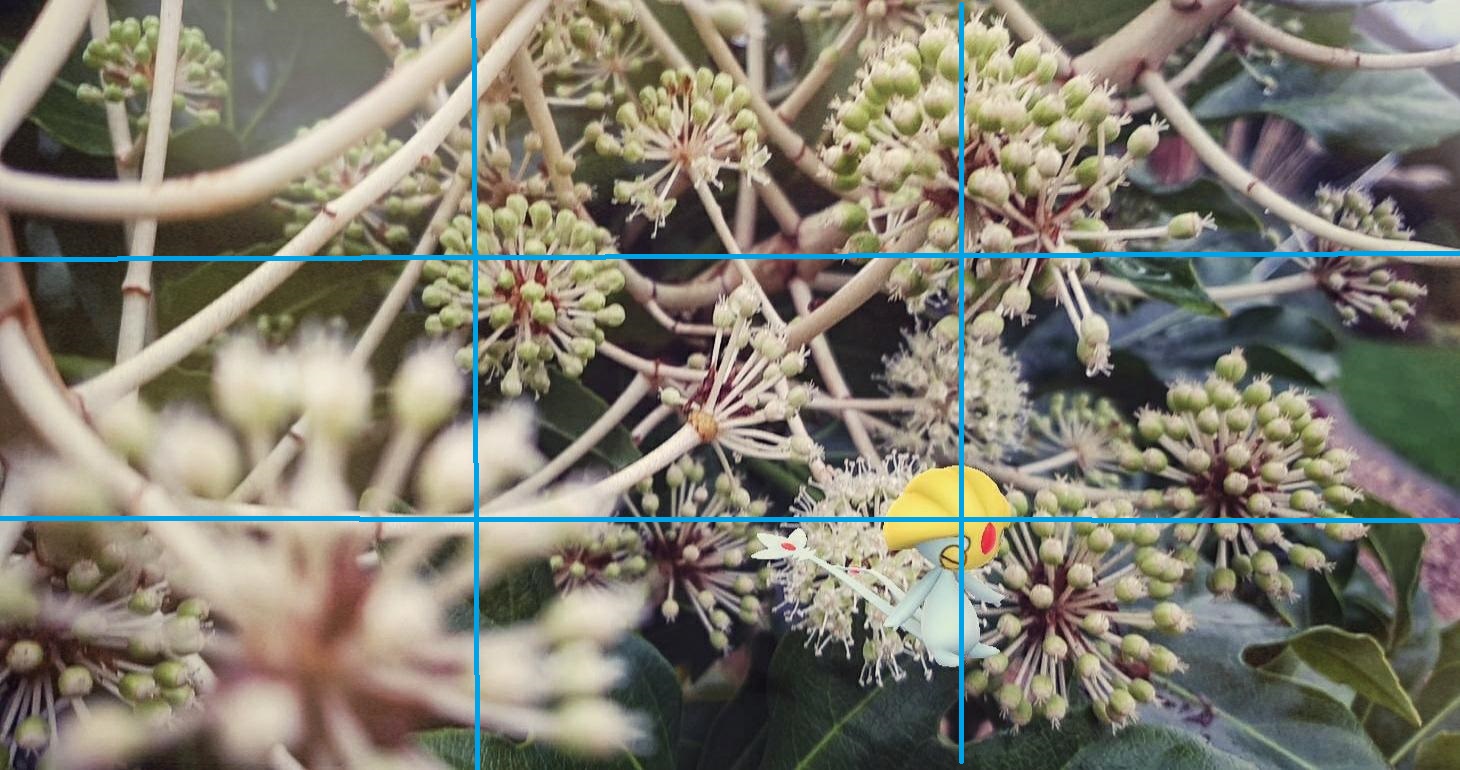 The lines on your grid are known as ‘power’ or ‘crash’ points. Lining up parts of your image like Uxie, along these lines can be very aesthetically pleasing!

How does it work? 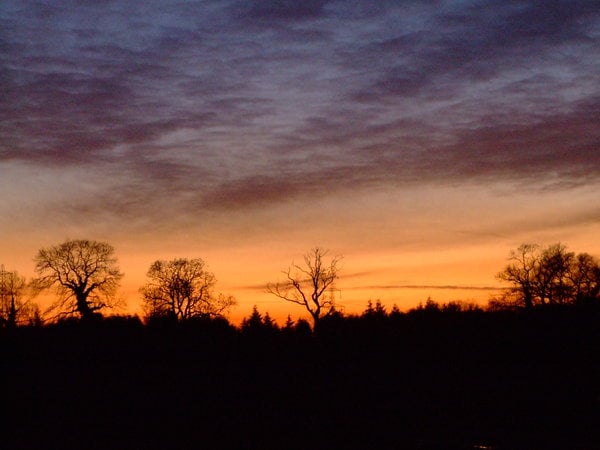 You can apply this same rule to your Pokémon GO AR photography! When setting your image, have a think about where the grid lines would appear on your phone screen, and use those to help compose your image. This works best with Niantic AR (formerly AR plus mode), as it allows you more choice in your image as the Pokémon isn’t in a fixed spot.

In the below image, I lined up Froakie with two of the grid lines, and had the rest of the grid lines meet the edges of the plant. Lining up eyes with the top third is very common in portraiture, and you can use the same technique with your Pokémon’s eyes. 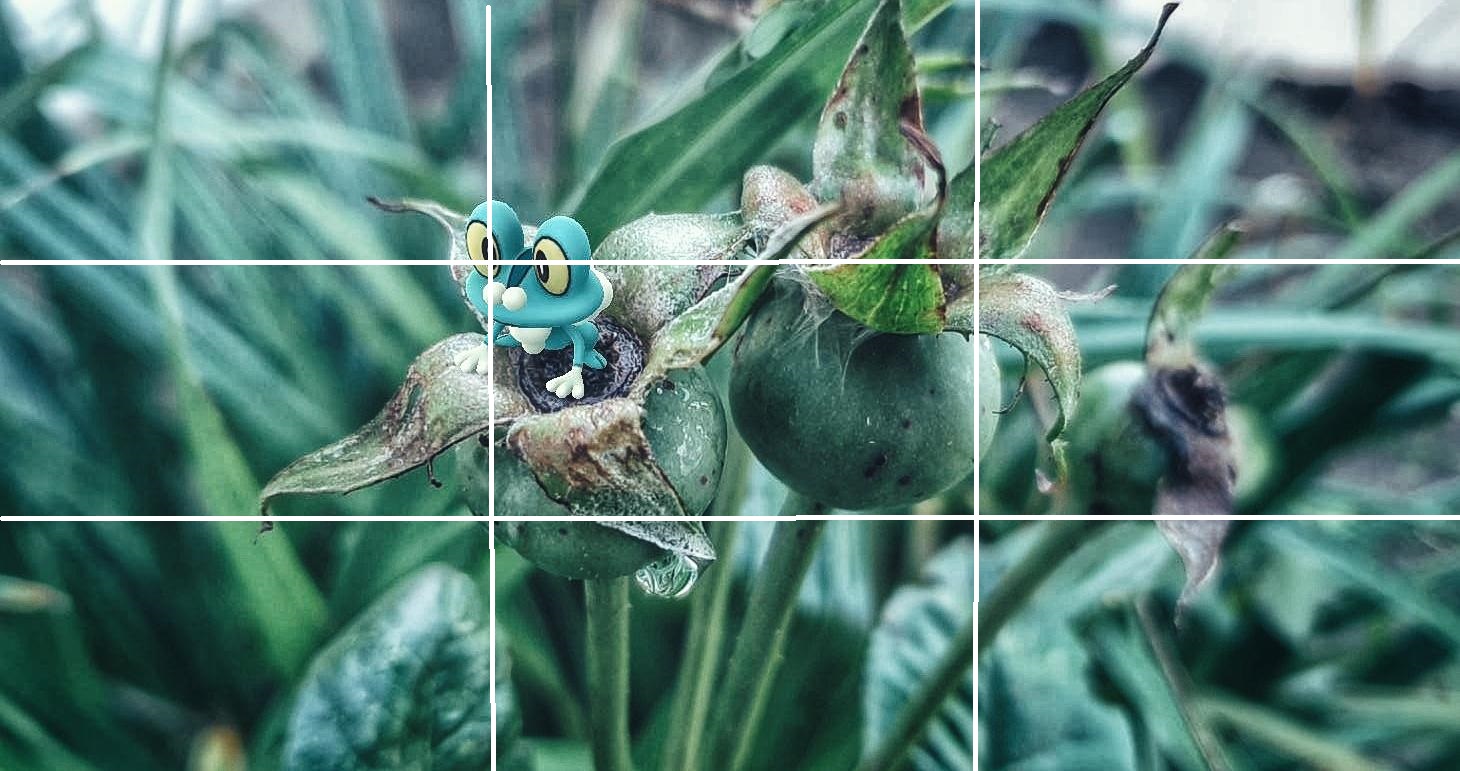 For another example, this shiny Spinda crosses the lines in several ways, via the swirls of their patterns, they fit either side of their head, and the leaf in the foreground to the left fits into the lines also. 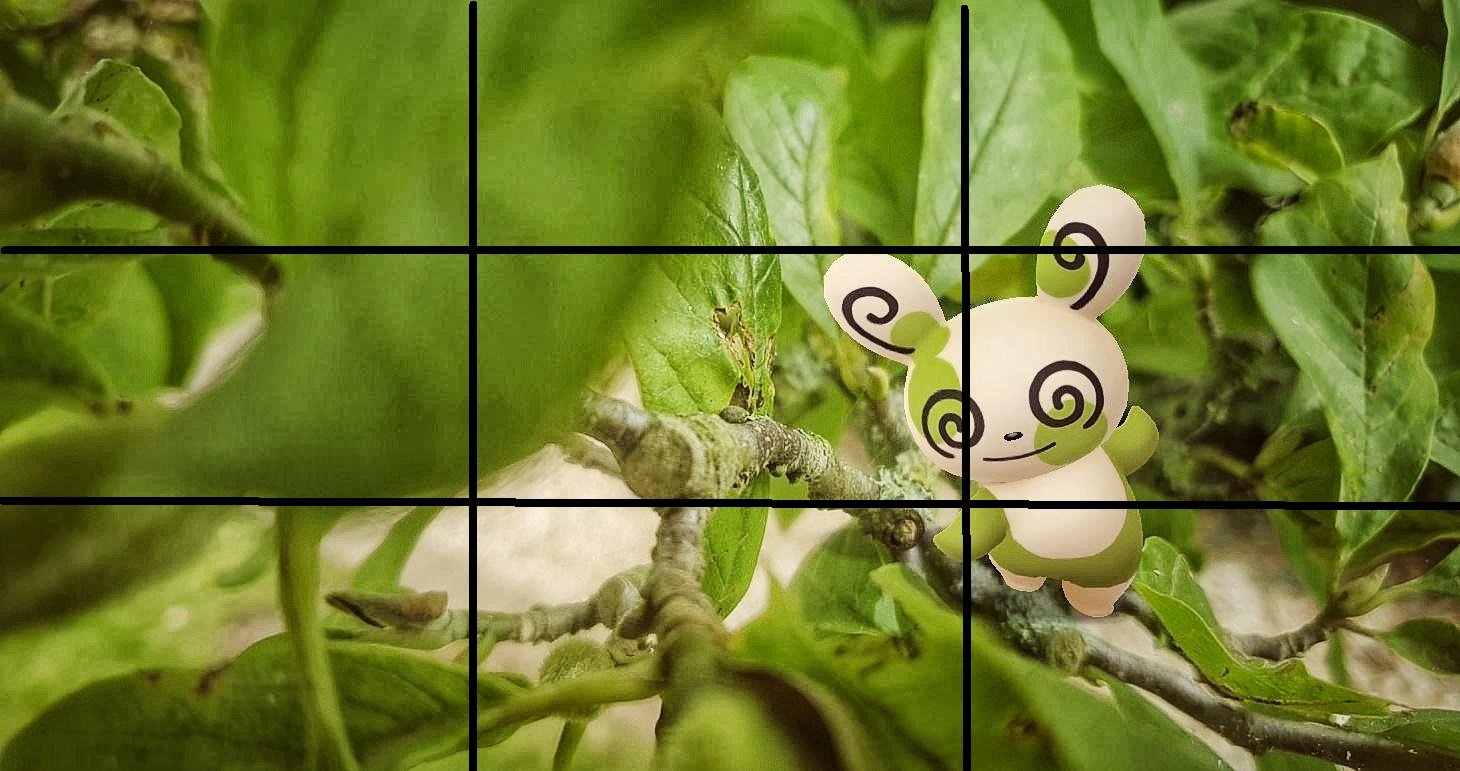 Having either of these Pokémon directly in the middle of the image would arguably make them less interesting to look at, and therefore less successful.

Now, this technique isn’t the only thing to consider, and rules are often made to be broken! I tend to think of the ‘rule of thirds’ as more of a guideline, as there are plenty of times that centralising your Pokémon can work brilliantly.

Below are two versions of the same image, one that follows the rule of thirds, and one that doesn’t. Both work, it’s just personal preference for which you like best! The top image follows the rule, with the lines intersecting at key parts of the image, particularly Virizion’s eye. 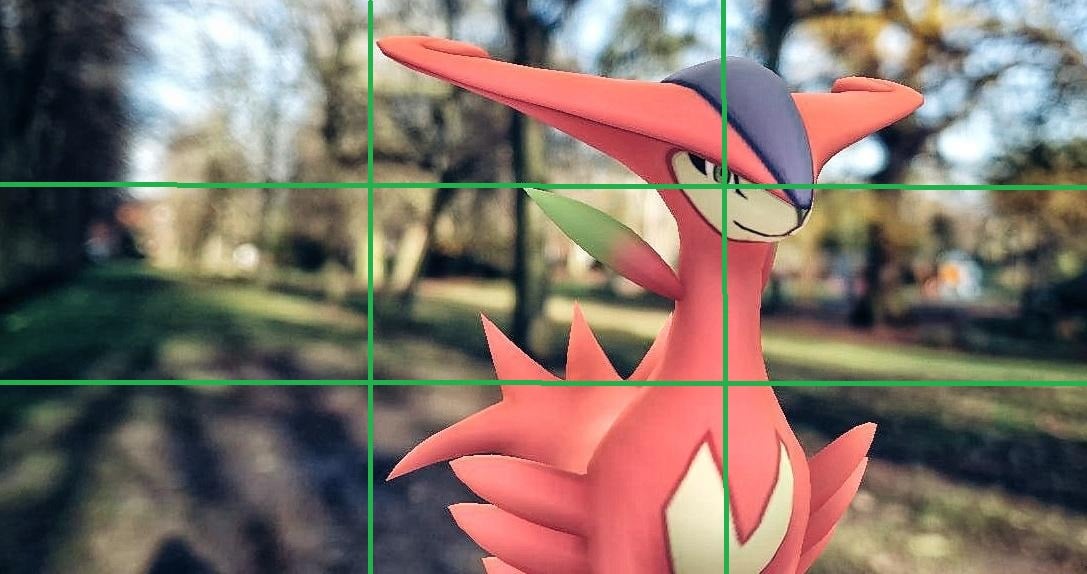 For this version, I’ve centralised Virizion, showing more of their design, as well as more of the background, and by centralising Virizion, I’ve broken the rule of thirds. While technically it fits some of the rules in terms of splitting the image into thirds, have something positioned dead centre isn’t considered effective within the rule of thirds. This image also uses the ‘Bokehmon’ technique, and I feel that making Virizion central allows you to appreciate that technique more than in the above. You might prefer the first image, or you might prefer the second, so much of photography is personal preference! 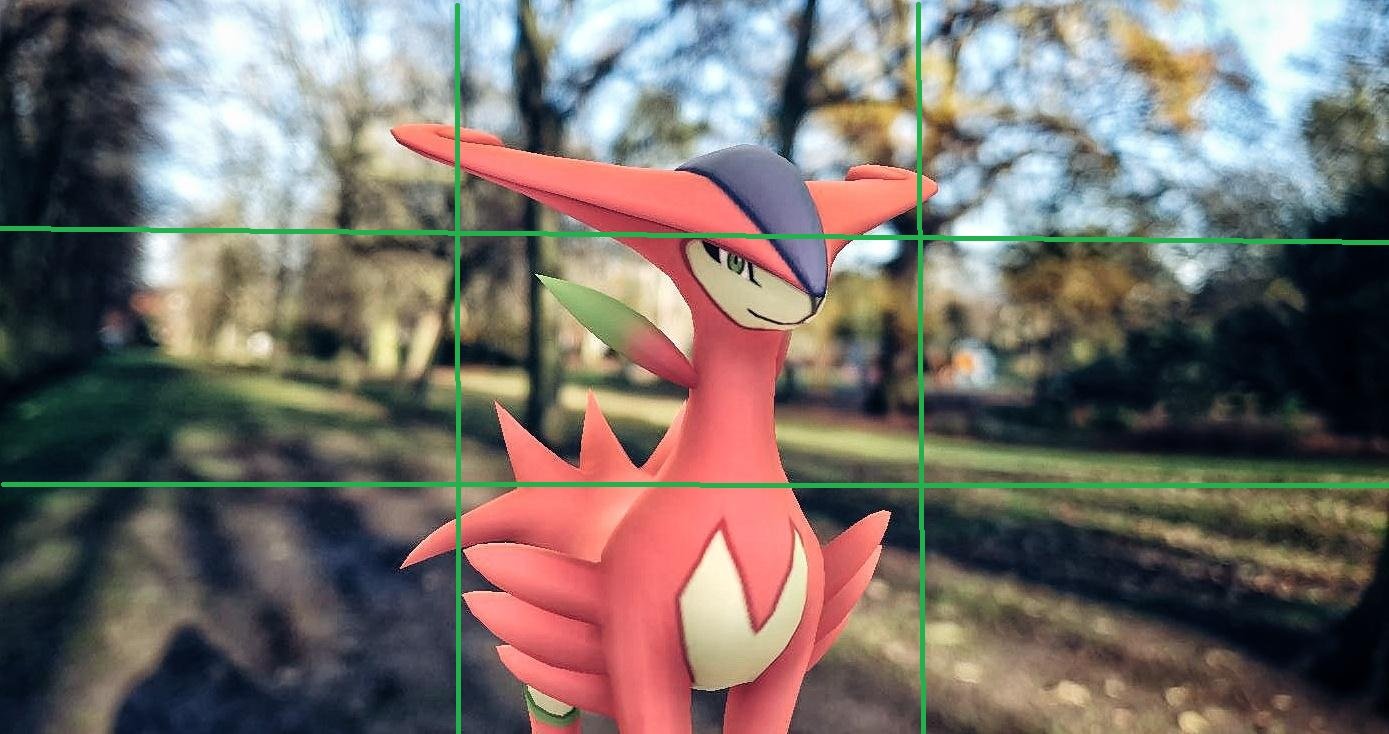 This Vespiquen should, if following the rule of thirds, sit along the yellow line on the right running vertically, rather than fit into the space to the right of it, but working with the area I had to photograph, it just worked better this way. The image is still evenly spaced out, but it technically breaks the rules. 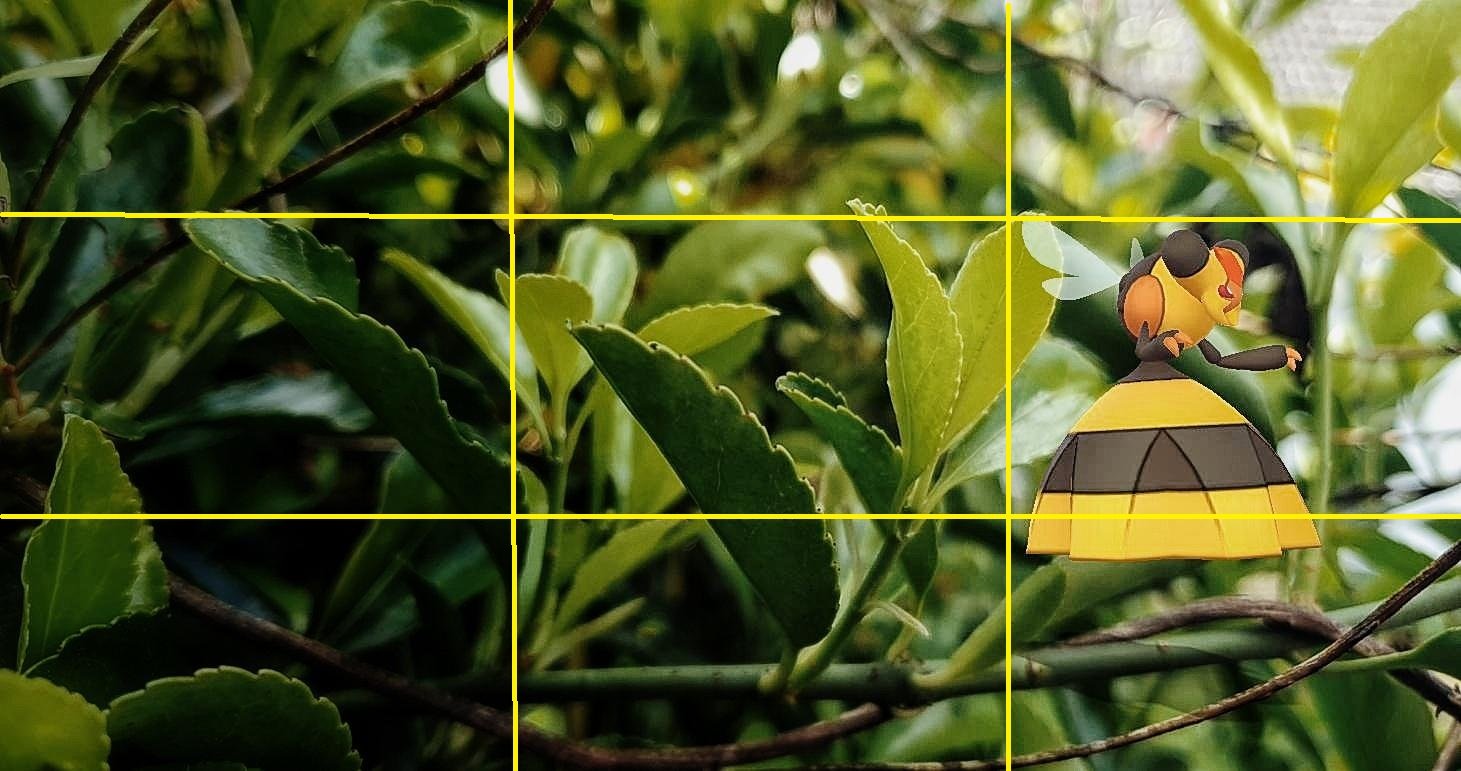 The rule of thirds can be a really helpful way to learn how to compose your AR photography more successfully. These guidelines can help you understand what works and what doesn’t, and help you learn to improve your work. I think of the rule of thirds as a starting point, it forces you to take a moment to consider how your whole image looks, rather than just the key part of it, the Pokémon. It slows you down and helps you look at the big picture. Would the Pokémon look better if it was positioned more to the left? Would it look better slap bang in the middle? It’s all about personal preference and taste, but slowing down and considering the rule of thirds can help you elevate your AR photography even more.

The key thing to remember is that while this is commonly called the ‘rule of thirds’, it isn’t a rule, only a guideline that can help you compose your photo. Sometimes following the rules can help you make something beautiful, and sometimes breaking them can too!

Be creative, and don’t forget to use our hashtag #GOHubAR on social media to share your AR photography.