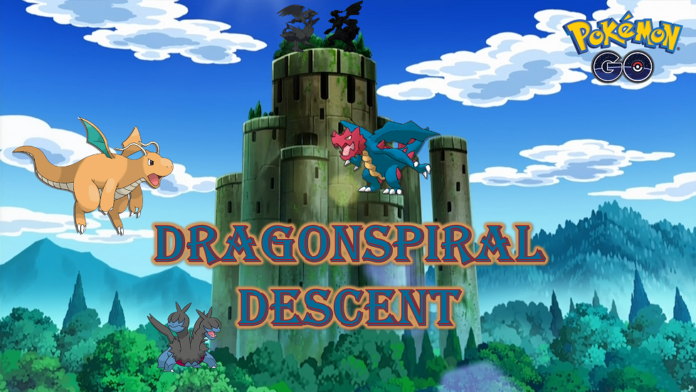 Alright folks, let’s keep this one really quick and easy today, shall we?

The Dragonspiral Descent event is upon us already, and while there’s quite a bit to see and do, how much of it matters for PvP? Let’s dive in and take a brief look! Consider this your super simple field guide to the event. Here we go!

The big new “get” in this event is DRUDDIGON, a mono-Dragon type that doesn’t evolve… what you see is what you get. Niantic in all their // Nianticness has opted to release it in research and raids only, so this isn’t a simple go-out-and-catch acquisition, and will bottom out at 10-10-10 IVs unless you get to trading. So how hard do we grind for it? Is this one to throw a bunch of raid passes at and drive around scarfing up the proper field research tasks to land ourselves a bunch?

Let me save you some time and heartache and answer that question right up front: not really, no.

Druddigon is an awesome looking Pokemon, and potentially getting a shiny right from the get-go is a nice hook. And it comes with a wide array of moves in MLG) that definitely piques one’s interest. The potential was there for Shadow Claw with a very wide and varied range of awesome coverage moves. But in the end, it is the limited moves it got that holds it back even more than its Attack-heavy stats. We get only one viable fast move, though at least it’s a decent one: Dragon Tail. And while it has nice spammy charge moves with Dragon Claw and Night Slash, its only closer is non-STAB, never-super-effective Hyper Beam, tied for slowest charge move in the game. Eww.

So yeah. It’s barely there in Ultra League, and fares little better in Great League. Night Slash unfortunately offers no real coverage (both it and Dragon are of course resisted by Fairies in particular), and Hyper Beam can do SOME things but is obviously far too slow to count on as anything but a Hail Mary as Drudd nears death. (And no, shields down is no better.) Do note, for what it’s worth, that a Level 20 (raid-level) Drudd CAN fit in Great League, so that’s nice, I guess? On the other end of the spectrum, it really doesn’t even get big enough to compete at all in Master League.

With shaky bulk, no handy subtyping for extra resistances, and spammy but low powered moves that don’t offer good coverage, Judge Drudd is most definitely NOT the law. My advice? Go out and get a few with free raid passes and whatever research ones you can find, and of course shiny hunters are gonna grind this hard anyway. (I mean, it IS a pretty sweet shiny, I’ll give it that!) It has a fantastic array of moves in MLG and has a lot of room to grow if it recieves new moves down the line. But I don’t see the need to go nuts. Find a good one or two and sit on them in hopes of a shakeup in the future.

HERE THERE BE DRAGONS

With Druddigon being the only thing new here, the rest of this is going to be pretty quick. This may end up being my shortest article in, like, ever. 😅

AND A SMATTERING OF OTHERS….

It’s a real shame that Golett remains locked behind a raid paywall during this event… considering its prominence as a spawn in the actual Dragonspiral Tower, I expected it to be a wild spawn during this event, but alas, Nianticness strikes again. If you have a glut of raid passes and get your fill of Druddigon and Dragonite and whatever else, sure, Golett is a decent use of extra passes to stock up on pretty rare candy. Because GOLURK has been pretty decent in limited metas of the past, and likely will be again in the future.

And there’s really not a lot else to mention. The other wild spawns (Vulpix, Seel, Mareep, Sneasel, Blitzle) you likely have plenty of candy for already, as they’re common spawns normally or have had enough events that you’ve likely been able to stock up. I suppose I WILL point out that the XL versions of ZEBSTRIKA and NINETALES are better than you probably realize, so if you enjoy grinding for XL Candy during events like this, you know what to do.

Alright, I promised I’d keep it direct and to the point, and for once, that’s exactly what we’ve got! Just a simple little guide to let you know how hard — or not! — to hit this event for PvP purposes. Good luck!

For more PvP tidbits, you can find me on Twitter for near-daily PvP analysis nuggets, or Patreon if you prefer. Or please feel free to comment here with your own thoughts or questions and I’ll get back to you as soon as I can!