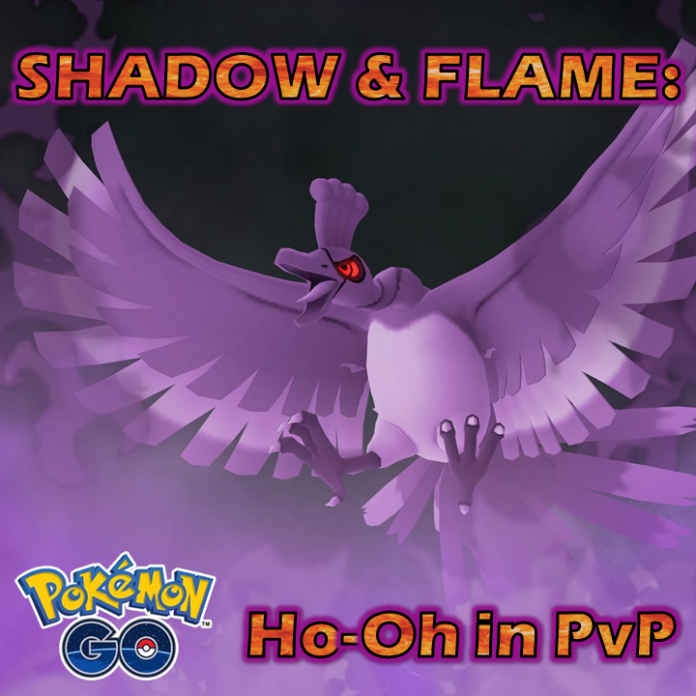 The “Under The Lights” article series provides some deeper dives on Pokémon of particular interest in PvP. Today, that means our first Legendary Shadow Pokémon to come to GO in quite a while, and like the last (Mewtwo), that also means it’s the first time the vast majority of us will be able to potentially run it in Great League! Exciting times indeed. So let’s get right to it and put Shadow Ho-Oh… under the lights.

(Note that Shadow Legendaries have a 6-6-6 IV “floor”, hence why you don’t see your standard super-low Attack in the #1 IVs.)

So Flying Fire types are certainly not revolutionary… there have been TWO in the game since Generation 1, after all. But as a reminder, that combination has some big pros (double resist Grass and Bug, a Flyer that takes neutral from Ice, and a Fire that actually resists Ground), but also some big cons (double weak to Rock and retains the standard Flying weakness to Electric AND the Fire weakness to common Waters).

Additionally, it resists Fairy, Fighting, Steel, and Fire for a total of seven resistances to only three weaknesses, so overall, not bad.

Also not bad? Ho-Oh’s stats. They are actually VERY similar to fellow uber-popular toasty bird Talonflame, having slightly higher Attack (just 1 or 2 higher, on average) and basically flip-flopped Defense and HP. (Ho-Oh’s Defense stat is virtually identical to Talon’s HP, and its HP is roughly equal to Talon’s Defense.)

Additionally, they both run off the same potent fast move these days…

Talonflame at least started out with Fire Spin to lean on until its Community Day facelift, but poor Ho-Oh used to be stuck with a hodgepodge of ill-fitting moves:

Extrasensory was usually the best just because it has passable stats, but has NO real synergy with Fire OR Flying Steel Wing could dish out decent damage but, again, Steel is a very poor fit for what Ho-Oh wants to be doing.

Hidden Power could at least result in a favourable type of move (remember when getting a Fire or Flying HP Ho-Oh felt like winning the PoGO lottery?) but has only average damage output and below-average energy gains. Frankly, they all stunk and completely hamstrung Ho-Oh as a truly competitive PvP (and PvE, for that matter!) Pokémon.

Then came the November move update, and Incinerate‘s grand arrival in the game, highlighted by appearing on… yup, Ho-Oh. Incinerate alone doubled its previous best winrate in all three leagues. That update was THE arrival, at long last, of Ho-Oh on the PvP map.

But of course, the fun doesn’t stop there. Ho-Oh has some very interesting charge moves in the mix.

Yet again, shades of Talonflame with Brave Bird in the mix, but here we also see our first divergence. While BB is Talon’s closing move with cheaper Flame Charges to set it up, with Ho-Oh Brave Bird IS the cheapest move available. That leaves it in a somewhat awkward spot of having to bait with a move that’s more expensive in Earthquake, which also happens to be a Legacy move. But thankfully, despite the on-paper clumsiness of it all, Ho-Oh manages to make it all mostly work.

Despite getting some nice wins that even Talonflame normally can’t, like Drifblim, and beating Talon head to head (by winning a CMP tie where both are ready to fire the winning Brave Bird), overall it plays second fiddle to Talonflame and even Charizard overall, matching most of their performance but being unable to beat some things they can like Altaria (Talonflame), Shadow Machamp (Charizard), and Cresselia and regular and Shadow Hypno.

But now it’s time for the good news… and it comes in multiples.

First off, so far I’ve been talking about Great League play. The issue is that Ho-Oh has been extremely difficult to actually get in Great League, requiring a really good (actually really BAD) trade of one at Research Breakthrough level (Level 15). It’s tough to pull off, requiring something silly like 3-3-3 IVs to slip in under 1500 CP. But like I said, this is GOOD news… because Shadow Ho-Oh comes at Level 8, or 13 if in boosted weather (Sunny or Windy).

Not only does that mean that for the first time, literally every player that wants one will be able to use Ho-Oh in Great League, but you can hopefully get a much more PvP-friendly IV spread. (Well, YOU can, but I will surely end up with something like 15-5-3, like most of my Shadow Legendaries thus far. 😭)

This is a really big deal, as Ho-Oh has been harder to get in Great League than Lugia, raided Cresselia, and even Latios, and not nearly everybody has been able to pull off those trades successfully, and they’re ALL easier. Now, finally, the playing field will be levelled for Ho-Oh fans.

The other good news is that, yes, Shadow Ho-Oh looks like an improvement on regular Ho-Oh in Great League. It’s not a straight upgrade—the loss in bulk means that Shadow generally loses to Scrafty and Whiscash, which regular Ho-Oh can at least theoretically defeat—but Shadow picks up wins against five BIG names: Cresselia (which Talon and Zard beat), Altaria (which Talon beats), Galvantula (which Zard beats), and Mandibuzz and Umbreon (which neither Talon nor Zard can defeat).

It still can’t quite overcome Hypno, Toxicroak, or Froslass (which Talon and Zard generally handle), but it now stands as an equal among them instead of looking longingly at them from the rear.

And while technically Shadow is a small step backwards with shields down as compared to regular Ho-Oh (losing to Cresselia, Diggersby, Pelipper and Froslass, but gaining new wins against Politoed and Shadow Hypno), considering the upward momentum that comes with even shields (and that does include if you push things to 2v2 shielding too), I think it’s still appropriate to say that Shadow Ho-Oh is an overall upgrade in Great League… and that’s before factoring in how much better an IV spread you may end up with getting it there!

So while the big winner here is Ho-Oh under 1500 CP, there will surely be those who want to push their new Shadow Fire Turkey to higher… uh… heights. So what about the other leagues?

Ultra League is admittedly a bit of a mixed bag. Shadow Ho-Oh does pick up wins over Drifblim, Armored Mewtwo, and sometimes Lugia, but loses Cresselia and Dragon Breath Charizard that regular Ho-Oh can beat. So not really worse, but not objectively better either.

No, if you’re going to forgo having Shadow Ho-Oh in Great League and level it up, you’re going to want to go all the way. Because in Master League, Shadow Ho-Oh is an upgrade overall. Regular Ho-Oh does manage close wins against Excadrill and Incarnate Landorus (and sometimes Altered Giratina that Shadow normally can’t match, but Shadow more than makes up for it with its own unique wins against Garchomp (with either fast move, and with its Community Day move factored in), Snorlax, Rhyperior, Thunder Dialga, and even Swampert! Quite the improvement with some genuinely awesome pickups.

That said, if you push Ho-Oh all the way up to Level 50 (and are facing Level 50 opponents), Shadow is more of a sidegrade as compared to non-Shadow, with regular Ho-Oh having sufficient bulk to outlast Thunder Dialga, Melmetal, Shadow Champ, and Gyarados, but Shadow having high enough Attack to instead beat Garchomp (Mud Shot or Dragon Tail versions) and any version of Kyogre (with Brave Bird dealing lethal damage after the Earthquake “bait”), which is a nice bit of turnabout.

One last thing: what if you actually followed Professor Willow’s advice, shocked the world, and decided to actually purify your Shadow Ho-Oh? Does Return do anything for it?

In short… no, not really. Return is probably best slotting in over Brave Bird, but in Master League it is a clear step backwards, and in Ultra League it’s also a backwards slide AND gets you into another situation of needing crazy low IVs. (And actually is impossible, come to think of it, since Shadows can have 6-6-6 IVs at worst!) Sorry Professor, but I think we’ll be leaving Ho-Oh in shadowy agony, evil trainers that we are. 😈

And okay, one last LAST thing. I know questions will come up, despite this being a PvP-centric analysis, “how is Shadow Ho-Oh in raids?” I am admittedly just a PvP analyst, but sure, I raid too, so I DID check. Unfortunately, even with the Shadow boost, Shadow Ho-Oh is still just barely inside the Top 50 Fire attackers in DPS, basically tied for 20th with non-Shadow Ho-Oh in TDO, and 33rd in terms of its overall total.

I mean, you can use it, but I certainly wouldn’t recommend the expense of powering one up just for that. Nearly every other Fire Legendary, Shadow or not, is better, as are things like Mega Blaziken and Mega Charizard (and even Shadow Charizard), Mega Houndoom, and once it’s released, even TDO standout Mega Salamence with double non-STAB Fire moves!

So now all that’s left is our TL;DR:

– Shadow Ho-Oh comes at Level 8 (or 13 if weather boosted), so the biggest news of all is that it will finally allow anyone that wants Ho-Oh in Great League to realize that dream without having to pull off the trade of a lifetime. Yay!

– Thankfully, Shadow Ho-Oh is on equal footing with non-Shadow in all three leagues, being a sidegrade at worst in Ultra, a slight upgrade in Master League (moreso in Master League Classic than in full-on, everything-is-Level-50 Open ML), and a definite upgrade in Great League.

It’s never strictly better—there is always a win or two that non-Shadow can get on its own thanks to superior bulk—but you generally beat more things (and REALLY great, top of the meta things in Great League in particular) with the Shadow Fire Turkey than you do with non-Shadow.

– Just a quick note on raid potential: there isn’t much. Shadow is slightly better than non-shadow Ho-Oh in that regard too, but far behind many other Legendary and even non-Legendary options already available. Not worth the powering up, IMHO.

Until next time, you can always find me on Twitter with near-daily PvP analysis nuggets or Patreon with its tie-in Discord server you can access to get straight through to me for personalized answers to your questions.

Continued thanks to my PvP friends, local and around the world, who have lent their own ideas and suggestions over the last nearly two years of PvP play, and helped teach me to be a better player and student of the game.