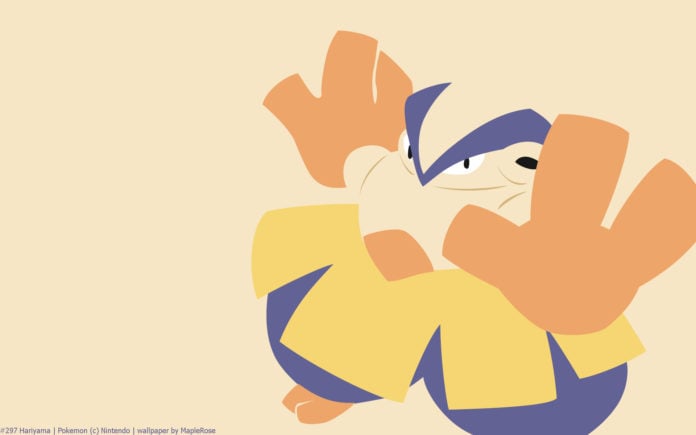 Hariyama is currently one of the best Fighting type Pokémon in the game, acting as a fat Machamp. This sumo wrestler ‘Mon has 25 less attack than Machamp and 48 less defense, but a massive boost of 108 to stamina. This has the added benefit of greatly increasing the Total Damage Output of Hariyama in the long run, while also maintaining a comparable DPS to Machamp due to the similar Attack stats and the same best moveset for Fighting types: Counter and Dynamic Punch.

In addition, Hariyama is a more candy efficient attacker than Machamp, as unlike the 125 to take a Machop to Machamp, there is only 50 candy needed to take a Makuhita to Hariyama. This means less candies to evolve one, and less of a need to give it rare candies if you get desperate. Although of course one would argue this gets offset by Machamp being a almost permanent tier 3 raid, that Machamp will only be level 20 or 25, and you will have to power it the whole way, a potential 248 candy investment in the worst case.

Hariyama might not be the king of Fighting type Pokémon, but you will not find a bulkier one that can also deal the damage needed to complete raids in a timely manner. There are no other Fighting types in any generation to come that have a higher Stamina.

It does have some glaring weaknesses though:

*This is if there is a need for a Fairy counter in the gym, unlikely as that may be.

Hariyama does not have the storied past that Machamp did with legacy moves, but it does share its current movepool, which means it has access to that fantastic combo of Counter and Dynamic Punch.

*Keep in mind that STAB cycle DPS calculations just compare the different movesets and they are not Pokémon-specific.

Mewtwo is the best Psychic attacker in the game. 300 attack compensates for the lack of Future Sight, and it has the lowest Time to Win among any of the other, comparable Psychic attackers.

Alakazam and Espeon are basically the same when it comes to attacking, Alakazam is more fragile and Espeon has a bit more bulk, but the time to win is virtually the same, with the slight edge to Alakazam. Either way, this is only possible due to their access to Future Sight.

Rayquaza is the current king of Flying types, as much of a complement that can be considering the rather lackluster usage of Flying types. It has some competition from Sky Attack Moltres, but it still is the best non-psychic attacker there is for the likes of Fighting types.

Moltres got a huge buff against Grass and Fighting types with access to Sky Attack from Moltres Day, making it a supreme counter to some Fighting types, with Hariyama being no exception.

Gardevoir is the the fan favorite Psychic and Fairy type that is really the only viable Fairy type attacker out there. It might not be the strongest counter, especially since Hariyama’s Steel type moves can shread it for Super Effective damage, but against Fighting moves it is double resistant and allows it to tank any damage it throws at it.

Latios is unfortunately stuck in a position as both a Dragon and Psychic attacker that is decent, but not the best in either category. In this case, as shown above there are far better Psychic attackers out there than it, with its only claims to fame being a high attack stat and resisting Hariyama’s Fighting movesets.

Dragonite is surprisingly good as a Flying type counter, despite the fact that it has no ready access to a Flying type fast attack move. While that fast move may just be a STAB Dragon type move, it still charges up a decent damage Hurricane to hit Hariyama.

Lugia is probably one of the tankier options to take on a Hariyama, boasting the lowest fainting times among all counters, tying with Ho-Oh and Mewtwo, as well as outputting decent damage due to it getting the Sky Attack boost a while back.

Exeggutor is only so high up because it had access to Confusion at one point. Without this overpowered Psychic move, a generalist Salamence would do better in battle than it. If you have this legacy move, by all means lay the smack down.

Metagross is just a example of how badly a sub-par moveset can reduce the usage of what would otherwise be a offensive powerhouse. 257 attack cannot save it having Zen Headbutt and Psychic. It is still decently tanky and can dole out some damage, so it is not the worst choice out there to hit a Hariyama, or other Psychic weak Pokémon.

Ho-Oh, like Metagross, is sub-par by lack of moves, but the moves it does have allow it to have a niche here. It exists to be a tank like Lugia, with just worse damage output.

Hariyama can be efficiently used in several raids, but here is a compilation of the ones in which it is one of the top counters:

Hariyama is fat Machamp, having bulk that allows it to operate more efficiently as a Defender than Machamp could, while having similar, yet slightly sub-par, attack that makes it still efficient in gym battles where Fighting types excel.

Furthermore, it is a very useful Pokémon, as Fighting types are commonly used in raids. As stated above, it might not be the main team composition, that honor goes to the king of fighters Machamp, but having it as an anchor or a candy efficient attacker is a great idea.