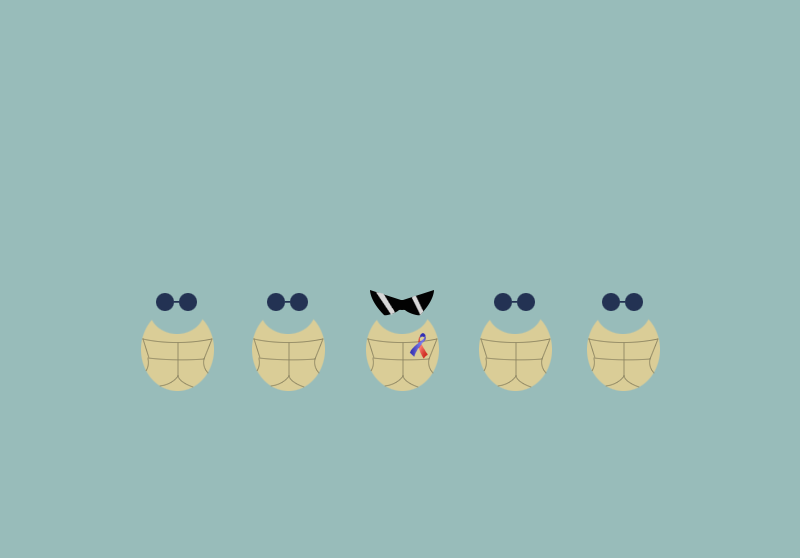 Welcome to my concept for one of the most frequently requested characters in Pokémon, the Squirtle Squad. Shortly after the first event-Pikachu, the player-base started to call for their favorite themed outfits, and certainly this is the one that often bubbles to the surface.

Even on my other articles, the comments have moved to either Team Rocket or Squirtle Squad (yes, a Team Rocket concept is coming).

It got me thinking a lot about what the Squirtle Squad are about, and how that could be applied to Pokémon Go in an interesting and memorable way. I will get to their backstory shortly, but in a nutshell, they are a team of Squirtle who formed a towns fire service in the anime. So what better way than an established event which celebrates the world’s firefighters?

Certainly Niantic have hosted themed charity events around global efforts, just recently we had the Mission Blue themed event, so this is certainly not a far stretch, at least in my mind.

So what is International Firefighters’ Day

The following is an excerpt taken from the Wikipedia Entry to commemorate the sacrifice year-on-year of firefighters around the globe.

Firefighters, in most of the European countries, celebrate their day on 4th of May as a ‘Day of Fire Service’ as well as St. Florian’s Day. This date is also known as St Florian’s Day worldwide and has been tradition for more than 150 years in Europe.

On December 2, 1998, a tragic event shook the Linton Community, Australia and the world. Firefighters in Linton, Australia- a populated region in Victoria- were fighting a large bush fire and called for mutual aid. This urgent mutual aid call brought the Geelong West Fire Brigade to the scene not knowing the despair and tragedy that was in store. Garry Vredeveldt, Chris Evans, Stuart Davidson, Jason Thomas, and Matthew Armstrong all loaded into company’s truck. They were part of a strike team and were being sent to help extinguish the flames. As the five headed into the hot zone, the wind suddenly switched direction, engulfing the truck in flames and killing all five members. This unfortunate incident is what inspired JJ Edmondson to bring about an international holiday, called International Fire Fighters Day, to support the lives lost and dedicated fire fighters who risk their lives every day to save life and property.

Tribute is paid by fire sirens sound for 30 seconds followed by a minute’s silence in memory of, and respect for, all firefighters who have been lost in the line of duty.

While not considered a national holiday, its observed in countries around the world. The official website can be found at www.firefightersday.org.

The History of the Squirtle Squad

The signature look of the squad was sunglasses, sometimes with bandannas, with the leader wearing a much more stylish set. Later in the anime, when Squirtle disobeys Ash it would don the glasses before doing its own thing.

My conceptual event brings a different dimension to the existing gameplay mechanics. The story is that fires are spreading due to unusually hot weather, a common theme in some countries in the world.

To emphasize these are natural fires, they are not set deliberately or maliciously by either humans or Pokémon.

So how do we help?

The Devon Corporation (a technological development company based on Hoenn, and very similar to Silph Co. from Kanto, in the main games) have developed special equipment and are issuing them to trainers to assist in the global effort to control the spread.

Devon Corp. is chaired by Mr. Stone. It plays an important role in the games, allowing the player to receive certain important items and resurrect fossils. Mr. Stone’s Son, Steven, is the Hoenn Champion and leader of Hoenn’s Elite Four.

The device is a backpack, the “Devon Aquapack”, which mimics the Pokémon move Water Pulse, the trainer has to target fires and extinguish them. Periodically, they need to be refilled. If the fires can be brought under control, the regular firefighting services can bring the remainder under control. This is an all hands on deck scenario.

Where there is smoke…

The world screen we look at in Pokémon Go has static gyms and Pokéstops, which can be seen from some distance away. My concept is that plumes of smoke will be visible on the map to show where fires have “spawned”. Near Pokéstops and Gyms would be preferable, I don’t want Pokéstops to catch fire or for the plumes to replace existing resource points or gyms. These are new assets. Below are 3 screenshots I have mocked up to show this effect, using either my own or stock base images.

Plumes would last about the same time frame as a Gym Raid before disappearing and new ones taking their place in another location.

When nearing the smoke plumes, fire sprites begin to appear. These are generated at a similar viewing distance to regular Pokémon and respawn at a similar pace to Pokémon at a Lure Module.

Sprites can spawn in Tier 1, Tier 2 and Tier 3 and offer scaled awards. Below are 3 screenshots I have mocked up to show the sprites, using either my own or stock base images.

Fighting fire with… the correct equipment…

…no, not with more fire that would just be silly.

Interact with the sprites to begin the encounter. This is identical to the current Pokémon capture screen but with multiple fire sprites moving around the screen. The “Devon Aquapack” will activate and generate a water orb. Throw the water orb on each fire sprite to extinguish the flames, in the same manner you throw balls at Pokémon. Higher Tiers need more water, curveballs, and nice/great have a higher chance to fully extinguish the fire.

Upon a successful extinguish on higher tier fires it becomes a lower tier. If you take too long, the heat becomes too intense and you exit the encounter. The higher the tier of the encounter, the less time you have. This is shown by a countdown timer at the top of the screen, similar to Gym Battles and Raid Encounters.

Putting out all the fires, awards stardust and 3x Candy. Which Candy you ask? Well, the Candy are randomly generated, you have saved all local Pokémon from the fire. It could be 2x Pidgey & 1x Ratata, or it could be 1x Mew, 1x Zapdos & 1x Rare. Tier 2 would award 5 Candy, Tier 3 would award 10. Completely random.

An Upgraded “Devon Aquapack” could also have functionality to infuse berries into the water orbs. These upgrades could be rewards from Tasks or purchased from the Store to generate revenue and funds for the charity.

Again, below are images I’ve compiled on the encounter I envisage using 3x Tier 1 “Pidgey” sprites.

So, I am sure you can guess it, the Pokémon Encounter will be a member of the Squirtle Squad. Not just one, two variants! The Crew and The Chief.

Crew members will have the regular round glasses and Squirtle move sets. The Chief will have the stylish glasses and an exclusive move which will be maintained when they are evolved, only forgotten when a TM is used. 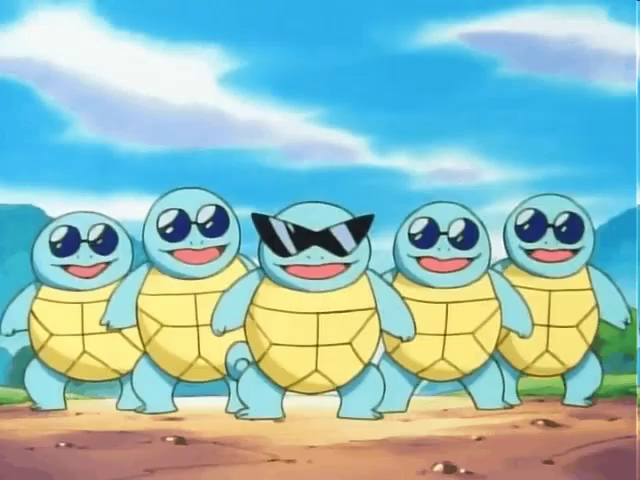 The exclusive move I am considering would be Mud Slap, a Ground type Quick Move that would be an effective fire suppressant and offers a decent counter against Electric types. In Generation 4 (HeartGold, SoulSilver & Platinum), Squirtle can learn this move via the Move Tutor.

Main Game Description: The user hurls mud in the target’s face to inflict damage and lower its accuracy.

In addition, by putting out fires, we would unlock a global reward as seen with similar events.

In reality, we as a community, smashed the target and unlocked an entire week of Tier 2 rewards. 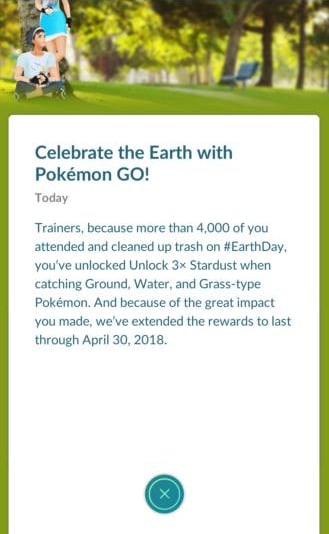 For a Fightfighter themed event, similar rewards could be applied to Water types as a minimum.

Genuinely, I don’t know, its adding a lot in game mechanics and assets. It typically goes way beyond a regular story-mode concept, but for the Squirtle Squad I think it needs to be a bit more “out there”. We know that Niantic does themed events, my concept takes the current game play style and applies it to a different mechanism.

I need to add that I have not run this by the organisers of IFFD or any other organisations which are associated with this or any similar event. I came across IFFD whilst looking for an internationally recognised date for the emergency service that the Squirtle Squad was connected with. It just happened to fit my criteria for this idea and I couldn’t be more thrilled with even the idea that this would spread awareness.

I attribute all credit for the screen shots, sprites and imagery to their original owners.

I am not a firefighter, if a disclaimer about not setting fires, not playing with fire or trying to put one out needs to go in here. I will do so.

I hope you enjoyed this concept, in addition to my previous articles, I aim to outline my visions for more content. I have tried to use as much feedback as possible to improve each concept, but this one is about as far outside the box as I have yet done. Certainly feedback would be appreciated.

The Squirtle Squad is one of the most iconic parts of the anime, and I was nervous about putting my ideas down. If it happens to be similar to another idea, it is purely coincidental; but I would love to see what others had in mind.

Here’s hoping Niantic is listening. Expanding content beyond the current game, can only enhance the game for both the solo player and the overall community.