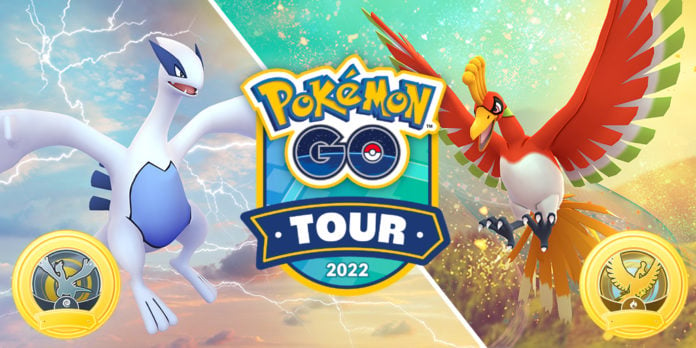 Trainers, the GO Tour: Johto is only a day away! Are you ready?

In case you didn’t know, ticket holders will have to choose between the Gold Version and Silver Version event experiences, each with version-exclusive Pokémon.

But is there really a better version? In this article, we’ll go over the pros and cons of each version so that you can make a choice based on your personal preferences.

Are you a meta enthusiast? A shiny hunter? A completionist? Don’t worry, all kinds of trainer profiles will be taken into account in the analysis. So let’s jump right into it!

Gold Version–exclusive Pokémon: Spinarak, Gligar, Teddiursa, and Mantine will be attracted to Incense.

Silver Version–exclusive Pokémon: Ledyba, Delibird, Skarmory, and Phanpy will be attracted to Incense.

Back when the Johto Tour was first announced, there were 16 new shiny Pokémon coming to Pokémon GO (17 if you also take into account Unown J).

From that initial list, you can tick off Slugma & Magcargo (Mountains of Power event), Hoothoot & Noctowl (New Year’s event 2022) and Hoppip/Skiploom/Jumpluff (Community Day February 2022). Which leaves only the 9 following Pokémon:

Corsola is a regional Pokémon (do not worry, you will have the chance to catch it during Johto Tour) and Tyrogue only hatches from eggs. Thus, the only new shiny Pokémon you will probably have the chance to obtain in the wild are Phanpy, Remoraid, Girafarig and Mantine. In fact, this sudden release of new shiny Pokémon from the Johto region in the last few weeks has sparked some controversy as some players claim that it devalues the Johto Tour ticket.

From the incense-exclusives, both Gold (Mantine) and Silver (Phanpy) are tied at one new shiny each (well, technically Silver has two as Phanpy can evolve?). The remaining new shiny Pokémon do not seem to have a higher shiny chance based on which version you pick.

So in this case, it’s up to personal preference between Phanpy and Mantine. Phanpy has already had a spotlight hour, but it looks like the kind of Pokémon that could get a CD in the future. But technically you’re getting 2 new shinies if you evolve it so… Perhaps Silver is the better version from that perspective?

From a PvE perspective, Johto is not the best region.

Version-exclusives are straight up bad in PvE, so there is literally zero reason to worry about that.

If you take a look at the Pokémon with increased shiny chance, the only ones with PvE potential are Swinub (Mamoswine) and Larvitar (Tyranitar).

Mamoswine is still a great ice type attacker. In fact, its shadow variant is the #1 ice type attacker in the game as of now. As a non-shadow, it’s slightly outclassed by Galarian Darmanitan and shadow Weavile.

Mamoswine’s niche in the PvE meta focuses on taking down Pokémon with a double weakness to ice type attacks, such as Rayquaza or Landorus. In a more “neutral” scenario (i.e. vs. a Pokémon with a single weakness to ice type attacks such as a pure dragon type), other Pokémon usually outclass it. It still does its job, but the heavy-hitting dragons usually do it a bit better.

Tyranitar is one of those Pokémon with great stats but not a good moveset.

Smack Down Tyranitar was the best rock type attacker when it was released, but it was power creeped shortly after. Rock Wrecker Rhyperior and Rampardos just do its job better, and even Terrakion outclasses it. Its shadow variant though is the best non-mega rock type attacker in the game, only outclassed by Mega Aerodactyl as of now.

Another interesting aspect about TTar is the fact that it can be used both as a rock and dark type attacker, which is something worth considering if you’re a casual raider or a new player trying to catch up. You’ll need to power up a shadow one if you want to take advantage of TTar’s full potential, though.

But this doesn’t end here. Unlike Mamoswine, Tyranitar will be able to mega evolve in the future. Mega Tyranitar has great potential and will probably become the #1 rock type attacker in the game, at least until Mega Diancie’s release. And even then, if Tyranitar ever gets Rock Slide, it has the potential to outperform non-Diamond Storm Mega Diancie.

So, technically speaking, both Pokémon are good raid attackers. But if you compare them to their main competitors, Mamoswine probably does its job as a specialist a bit better. But TTar is rarer, and it will be able to Mega evolve in the future. If I had to choose one, I’d probably go with Tyranitar.

At the end of the day, we’re just talking about an increased shiny chance. You’ll be able to get both Pokémon regardless of what version you choose.

Things are looking a little different from a PvP perspective, as several Pokémon are good enough to be considered meta.

Skarmory is a Silver version exclusive. It’s a top tier Pokémon in Great League, pairs incredibly well with Swampert to form one of the most threatening cores in the league, and can also be used in Ultra League, where it doesn’t shine as much.

Farming Skarmory Candy XL is not an easy task, so if you want to build one for UL, this is a great opportunity to catch as many as you can to trade them for XLs later.

Ariados and XL Ledian are not the kind of Pokémon that are good per se. In fact, you won’t see them in open PvP formats because they’re outclassed by plenty of other Pokémon. However, in certain restricted metas such as the Love Cup, they can have some niche play (especially Ariados).

Gliscor is a good Pokémon to use in Ultra League, and it mainly functions as a corebreaker or a safeswap (both in Premier Classic and open metas). Believe it or not, it’s used by players enough to be considered meta and not a spice pick anymore. Make sure you bring an answer to Pokémon carrying ice type moves, though!

Bubble Beam Mantine is one of the most annoying Pokémon in Great League. It’s kind of a meme and usually only used in teams relying on timeout strategies, so I wouldn’t really consider it a meta pick, at least in open metas.

These were the version exclusives, but there are other Pokémon with increased shiny chance that are worth mentioning too. Please note that you’ll be able to catch the Pokémon listed below regardless of which version you choose.

Purified XL Return Wobbuffet belongs to the spice category in certain Great League restricted metas. Not a Pokémon I would recommend, but definitely one of those Pokémon whose Candy XL is not easy to come by.

Forretress is a spice pick in Great and Ultra League, but it’s had some play in the past in Remix Cups. It’s far from a meta-shaking Pokémon, but if you’re looking to build one with good IVs for GL or if you just want to get a shiny one, the GO Tour: Johto seems like a good opportunity to do so.

Mamoswine still has some play in Master League Premier Classic. It’s sometimes used as a safeswap or in ABB teams such as double ground.

Ho-Oh is a great Pokémon to use in PvP. With Incinerate/Brave Bird and Earthquake, it’s one of the best picks to use in Master League without a doubt. It’s usually paired with Zacian, Dialga and Giratina.

Plus, Ho-Oh is finally getting its signature move Sacred Fire. Stay tuned for our Sacred Fire Ho-Oh analysis once the stats go live!

Lugia is the Pokémon with the highest stat product in Master League. Its tankiness makes it a great safeswap in that league, allowing it to tank plenty of damage and sometimes regain switch and flip matches.

We hope you found this guide helpful!

Have you made up your mind? Let us know in the comments section down below!

At the end of the day, the most common reasons why trainers seem to pick one version or the other seem to be:

Regardless of what version you choose, we hope you enjoy the event. We’re looking forward to listening to players’ feedback.