Players will receive 2× Candy for catching, hatching and transferring Pokemon. More Ghost- and Dark-type Pokémon will be appearing in the wild, in Eggs, and in raids. 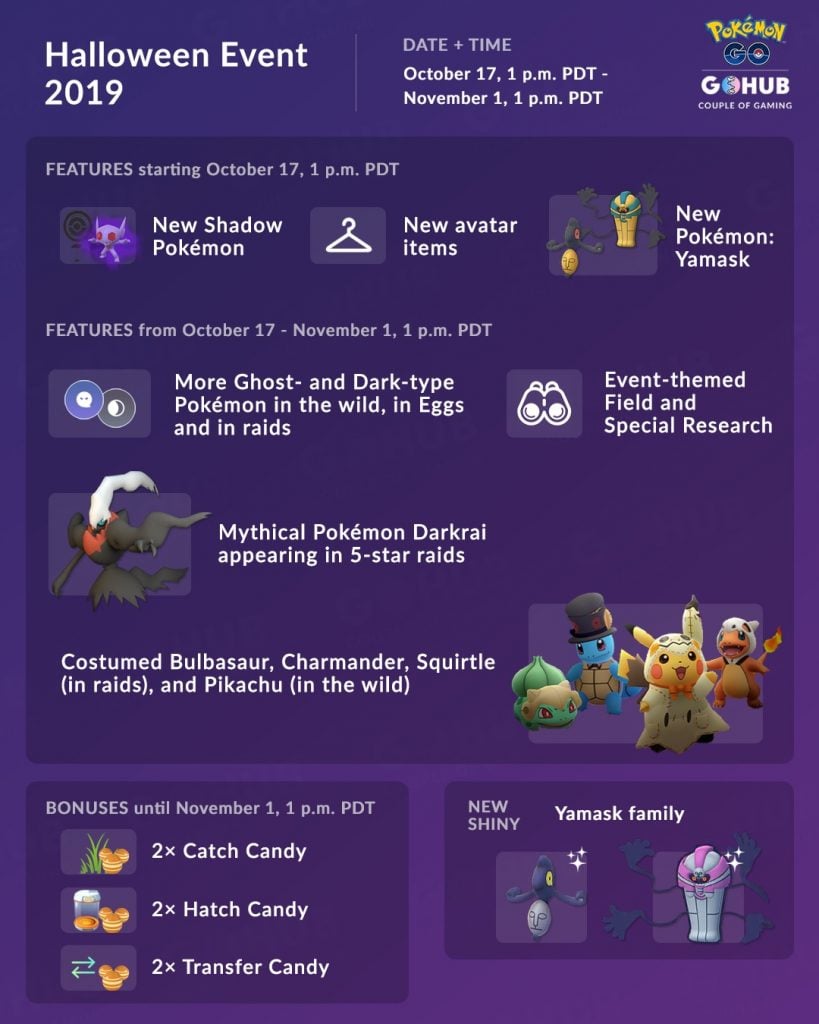 Darkrai will be appearing in five-star raids as a special limited Raid Boss. Players can defeat Darkrai by using a variety of Fighting and Fairy types they’ve collected before. Be careful – Darkrai is stronger than some of the earlier bosses you may have encountered. Darkrai (also known as The Pitch-Black Pokemon) will be available only during the event period as a Tier 5 raid boss.

Yamask is making its Halloween debut in Pokemon GO, both normal and shiny form. Yamask is also known as the Spirit Pokemon. Yamask evolves into Cofagrigus, making this a great opportunity to get two new shiny Pokemon.

More Ghost- and Dark-type Pokémon will be appearing in the wild, in Eggs, and in raids. The official announcement mentions Gastly and Murkrow. We will update this page as more information comes in.

New Team GO Rocket Pokemon will be available after the Halloween 2019 event ends. If you’re not interested in catching Shadow Pokemon, some of the additions could make you rethink that. Purifying a Shadow Pokemon nets you a Level 25 Purified Pokemon, and what’s better than a purified Lapras? Two purified Lapras.

Pokemon wearing Halloween costumes will be appearing, some in in raids and some in the wild. If you’re lucky, you might event encounter these Pokemon as shiny Pokemon:

Five new items are coming to the Style Shop:

At this moment we don’t have additional information on these items, but we will include prices as soon as they are public.

Halloween event always has a special place in our hearts, mostly for being the first released special Pokemon GO event – back in the day. As often with these events, it’s easy to forget the benefits and focus only on one thing (Darkrai). In order to prevent that, we’ve created a handy list of things you need to track and should do to get the most out of this event.

Transfer every Pokemon you don’t need.

With 2× Transfer Candy, keeping Pokemon in your inventory is not recommended. We usually use this event as an excuse to filter out and clean our Pokemon Storage, getting a massive amount of Candy in the process.

Keep transferring Pokemon you don’t want to keep your inventory clean throughout the event. Don’t forget to clear your Pokemon storage before the event ends on November 1st.

Especially important: transfer your excess Legendary Pokemon. This is a once a year opportunity to gain more free Mewtwo / Raikou / Kyogre / Groudon candy.

Obtaining Candy for Pokemon with low spawn rates is usually done with the help of Rare Candy, but Rare Candies are difficult to get. Therefor, we recommend hunting for rare spawns during the Halloween event period.

Combine the 2× Catch Candy with Pinap Berries in order to get 4× Candy from your catches. As always, event bonuses stack on top of existing item bonuses.

2× Catch Candy applies for raids as well, which creates an interesting opportunity to use your Silver Pinap Berries more frequently. Raid Bosses with high catch chance (like EX raid Mewtwo) are an excellent opportunity to get more Candy easily.

Ghost types are not common spawns during day hours, and catching some shiny Ghosts has proven to be a challenge. Use this event to get a shiny Yamask, as we have a feeling it won’t be easy to obtain afterwards. Yamask spawns will be boosted during the event.

Hatch 10 KM eggs at your own pace

10 KM eggs give a lot more Stardust and Candy than lower distance Poke eggs. Make the most of this by hatching them during the event with an active Star Piece.