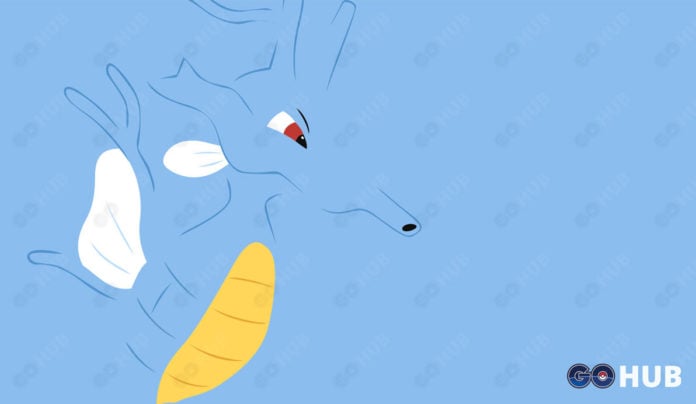 The Dragon type is undoubtedly one of the mightiest and most interesting types in Pokémon Go. This typing boasts of some of the most OP Pokémon in the game and each and every one of them fulfils a useful niche in the meta. Most of the legendary and pseudo legendary Pokémon just so happen to be dragons, and as such, they tend to be meta defining when everything is said and done.

But what about the remaining Dragon types? While these Pokémon don’t exactly come with monumental stats, they make their mark in the meta through their moveset, type combinations and useful resistances.

A dragon that actually checks all of the above-stated parameters but is often overlooked is Kingdra.

Kingdra is the only Dragon type Pokémon from Gen 2 and is the first dragon to be introduced after the OG Dragon type: the Dragonite family.

While Kingdra’s stats are undoubtedly inferior when compared to the pseudo legendary status of Dragonite, the introduction of PvP has propelled numerous such Pokémon to an altogether different level (Altaria says “hi!”)

Kingdra is a monster in PvP. It has many things going right for itself that make it a formidable Dragon type in the lower leagues of PvP.

With PvP tournaments being a craze in the world of Pokémon Go, having a powerful dragon in your team always works in your favour!

This write-up aims to give you a detailed overview on Kingdra’s phenomenal potential, its viability and why it should absolutely be in your line-up for any PvP tournament.

Kingdra has a Maximum CP of 2641 at Level 40. It has a dual typing of Water and Dragon and as such, is weak to just Dragon and Fairy. Its set of resistances include Fire Water and Steel type.

Kingdra has the following stat distribution:

Kingdra can learn the following moves in Pokémon Go:

The ideal moveset for Kingdra is Dragon Breath paired with Outrage and Octazooka.

So what really clicks for Kingdra?

Kingdra is not just a sea horse dragon but is also a dark horse in the Great League. It is a rather unorthodox performer where it is a danger in situations where your opponent’s shields are down and Kingdra wholly salvages this.

Octazooka charges quicker than any of Kingdra’s other charge moves. It encourages shield baiting and even when shielded, boasts of an impressive 50% chance to reduce the opponent monster’s attack by 2 stages! That is literally a drastic reduction in the ATK stat and your other Pokémon would also appreciate that if Kingdra goes down. Regardless of how and when Kingdra goes down, it will take off a huge chunk of the opponent’s HP.

In this regard, Kingdra is excellent for the any of Silph Arena’s PvP tournaments.

Kingdra serves as an excellent check for the starter Pokémon. Therefore, get your horses (Kingdra) ready for any PvP tournament.

While Kingdra retains its defensive prowess of the Great League, it shines as an attacker and reaches its true potential in the Ultra League. Dragon Breath terrorizes many Pokémon in this league and most notably, Kingdra is a thorn in the stride of both forms of Giratina, the kings of the Ultra League.

With the increased usage of starter Pokémon and Steel type Pokémon in this meta, Kingdra becomes all the more viable. A solid pick, indeed.

Kingdra had been overlooked for a long time. During its introduction into the game, the meta focused solely on DPS and attacking prowess. With the advent of PvP, things have changed. The defensive prowess of a Pokémon lets it edge out top attacking monsters. Kingdra is exemplary to that.

It is advisable to use Kingdra as a closer in your PvP line-up. It is absolutely amazing in no-shield scenarios and is one of the few Pokémon whose fast move alone makes it formidable enough to make an impact on the meta. The addition of an attack reducing charge move in Octazooka makes Kingdra a dangerous threat.

Kingdra is technically immune to Fire and Water types. This translates to a tremendous amount of resistance in Pokémon Go. The Steel resistance and lack of weakness to Ice type attacks set it in a class apart from other Dragon types. Dialga and Palkia are two Pokémon that don’t take super-effective damage from Ice types. Kingdra is the only non-legendary dragon to have this in its résumé.

I often mention that PvP is pretty much like a chess match. Now which chess piece has the most unorthodox and unpredictable move onboard? Yep, the knight.

How ironic that the knight is a horse! Kingdra is your dark horse. Your dark knight. Use it well and you might very well checkmate your opponent’s king with Kingdra.