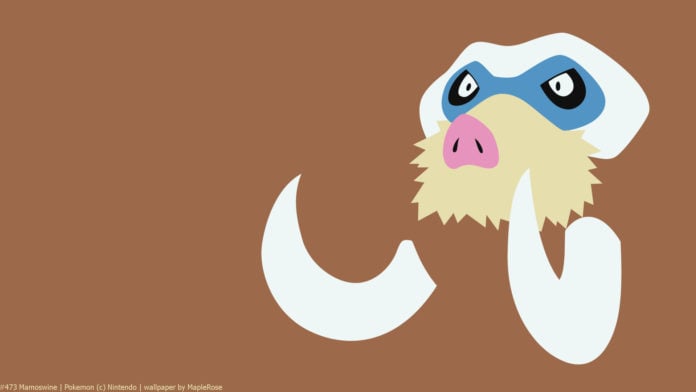 Out of the 18 different Pokémon types, the Ice type just so happens to be the rarest. The elusiveness of this type, sadly, does not compliment the battling prowess of these chilled out monsters. The Ice type has the least amount of resistances of any type, that being themselves. However, they find themselves often in battle gameplay.

Well, they might not be hot enough for a defensive role, but in an offensive standpoint, they hold the distinction of being one of the only 3 types to deal super-effective damage to one of the most powerful class of Pokémon in the game: the Dragon types. In Pokémon Go, there were no powerful Ice types that had the raw power to not only destroy dragons but also be tanky enough to withstand damage.

Gen 4 finally brought in an Ice type monster with excellent stats that quickly became the king of this type and the biggest threat to the Dragon types… a threat of mammoth proportions, aptly known as Mamoswine.

As mentioned, Mamoswine possesses the raw stats to finally give the Ice types their due. Its additional Ground type, gives it a fantastic resistance to Electric types and coverage against many types, including ones Mamoswine is weak to. Most importantly, in a game where a moveset can make or break a Pokémon, Mamoswine is blessed with an amazing move pool that literally snowballs its utility in the meta.

The most remarkable feature of Mamoswine is that its STAB Ice and Ground moves allow it to deal super-effective damage to 9 types and neutral damage to 9 other types, making the count to 18. That is every single Pokémon type. As such, the unique typing of Mamoswine (not including its own pre-evolutions) allows it to be an offensive beast against every single type out there.

Mamoswine can learn the following moves in Pokémon Go:

Powder Snow charges quick and allows Mamoswine to spam Avalanche in a limited amount of time. Avalanche is as scary as it sounds. Being a 2-bar charge move sporting 90 base power in both PvP and PvE, this move is often a knockout.

Mamoswine is a pretty good Ground type attacker as well, shelling out impressive DPS through Mud Slap and Bulldoze.

Ancient Power, Mamoswine’s Community Day exclusive move, can be potentially useful in PvP provided it gets the 10% buff to its stats. While that buff can take Mamoswine to another level altogether, the low probability of it happening doesn’t make it too attractive.

Stone Edge is pretty underwhelming compared to its other moves.

It is totally worth giving Mamoswine a second charge move considering the fact that it can cover all types. As such, go for Powder Snow paired with Avalanche and Bulldoze.

Importance of Mamoswine in the meta

Mamoswine’s high stats don’t make it shine much in the Great and Ultra League. Where it realises its true potential is the Master League.

Its Ice type moves make it the best check to all the dragons running rampant in this league. Be it Dragonite, Salamence, Garchomp or Rayquaza… Mamoswine is the best counter to all of these Dragon types.

In addition, its Ground type moves make it counter powerful Pokémon such as Metagross, Tyranitar, Raikou and Dialga.

Else, you can opt for the low chance high reward Ancient Power to give it a crazy powerful buff, making it all the more dangerous.

With its offensive coverage to literally every single type of Pokémon, Mamoswine is all but a must-have for your PvP line-up.

Considering the fact that Mamoswine had its own Community Day and that Swinub is a fairly common spawn/hatch, this Pokémon is very much accessible.

In addition, it is one of the few Pokémon that doesn’t need its Community Day exclusive move to be viable, Mamoswine is easily one of the best meta relevant Pokémon to have in the game.

When it comes to gyms, it is no rocket science why Mamoswine is so useful. It is one of the best Pokémon that can deliver super-effective damage to a gym consisting only of pseudo legendary Pokémon. That itself speaks volumes about how powerful Mamoswine is.

Undoubtedly, the most interesting aspect of Mamoswine right now!

Mamoswine is one of the best counters to 5 out of 9 legendary Pokémon from Gen 5!

Yes, you read that right.

Gen 5 is probably the most impactful generation as many of the Pokémon from Unova are going to shake up the meta. This is based on the Gen 5 moveset update which clearly reveals how each Pokémon from this generation is going to pan out. Of course, do keep in mind that Niantic can very well change these at the last minute.

However, going by how things look at the moment, you are going to need a Mamoswine big time.

Let us check out the various legendary Pokémon that fear Mamoswine:

This is where Mamoswine is king. Mamoswine is the undisputed number 1 counter to Landorus due to the Genie Pokémon’s 4x weakness to Ice type attacks.

And who plays Mr. Freeze better than Mamoswine?

It almost feels poetic as Landorus is going to make the previously underwhelming Ground type relevant, just like Mamoswine did with the Ice type.

The saga of the Genie trio continues with Mamoswine exploiting both the Electric and Flying types of Thundurus.

While Mamoswine excels against Landorus from an offensive point of view, it also rakes in a defensive outlook when it comes to Thundurus. This is because Mamoswine resists all the Electric type attacks that Thundurus throw at it. In return, it dishes out super-effective damage against it. Neat.

Mamoswine checks out every Pokémon from the Genie trio.

Tornadus makes it debut as the only pure Flying type in the entire game. Accordingly, Mamoswine punishes it coldly and mercilessly with its Avalanche.

A member of the famed Swords of Justice, Virizion is pretty tanky, sporting impressive DEF and STA stats. Normally, Mamoswine should have its own set of problems against Virizion due to the fact that Mamoswine is weak to both Grass and Fighting types. However, Virizion lacks a fast move in both of its types. As such, Mamoswine will definitely last long enough to shell out at least one Avalanche and take off a decent chunk of Virizion’s HP.

The presence of a powerful and reliable Ice type attacker was much needed in Pokémon Go. Mamoswine totally dominates this role with good overall stats and a fantastic movepool to boot. The best part is that Mamoswine is pretty accessible and it doesn’t need a Community Day exclusive move for you to derive the best usage of this beast.

It is an excellent Pokémon in literally any scenario, be it PvP, gym sweeping or 5* raid bosses. Furthermore, it rules the Ice type meta and will be more or less unchallenged. Kyurem has the stats to overtake Mamoswine as the Ice type king but it lacks the moves to gold that position. Unless Niantic throws a curveball at us, Mamoswine is very well slated to be a superior Pokémon.

At this moment, Mamoswine is undoubtedly one of the most useful Pokémon to deal with the Gen 5 Pokémon. Being a counter to more than half the upcoming legendary raid bosses is a big deal. A mammoth deal, if you will.

It is worth mentioning again that Mamoswine has the typing to deliver unresisted damage to every single Pokémon type. This is a huge feat, something hardly any Pokémon can boast of. Although it has its own set of weaknesses and a sub-par DEF stat, it is definitely going to leave its mark before it goes down. In short, Mamoswine is a fantastic Pokémon to have in your team. A powerful icy cold Pokémon that you can bet is going to send shivers down the spine of your opponent(s).