If you are a player who enjoys doing lots of trading or powering up your Pokémon to the best they can be for raids (soloing and duoing especially), then you might be in that population of players that struggle with their stardust numbers. In this article, I hope to shed some light on the perspective of stardust grinding and use in different aspects of the game.

First, we much touch a little bit on how to get this precious stardust. Stardust is gathered a few different ways. The easiest and most common is by simply catching Pokémon. Below is a chart on the amount of dust catching Pokémon rewards you with.

The third evolution catch dust is definitely the most alluring, but also the rarest. Most players catch all base evolution Pokémon with the rare sighting of a second evolution mon. Word on the street says that the rare Chimecho will give a base of 1000 stardust when caught, so if you find yourself with a Chimecho spawn, be sure to catch it! As mentioned in our last Stardust Article, catching 100 base evolution Pokémon with no weather boost is a simple 10,000 stardust, which will get you very little in the world of stardust. There are a few ‘fixes’ to the stardust system mentioned in this article as well, so there is no need to go into that topic here.

Egg hatching is another one of the more common ways to obtain stardust, although it is much slower. Egg hatching can grant quite a lot of dust, especially during double dust for hatching events. The amount of stardust scales with the distance egg you hatch, the chart below provides details.

As you can see, if you have a batch of eggs ready to pop it is in your benefit to pop a star piece, hopefully before they start hatching! You can maximize stardust gains from eggs this way!

Raids also give you stardust, 1000 stardust for each raid whether you win or not. This is 1,500 stardust with a star piece running.

This last method is reliable yet expensive but can get you a little push in dust fast. Many people call the nanab berry the ‘gym fodder berry’ and for good reason. Never delete them out of your bag! They can be put to use in other ways than making your Pokémon less jumpy. When you pass by a gym occupied by your team or click ‘go to gym’ from the defending Pokémon page, you can feed berries. Each berry gives 20 stardust. You can feed 10 berries per Pokémon every half hour, for every Pokémon in the gym. If you feed 10 berries to 6 Pokémon, you make out with 1200 stardust. Star pieces do affect this, making each berry worth 30 stardust. Feeding 10 berries to 6 Pokémon with a star piece, you get 1800 stardust. As mentioned, this does take 60 berries for every time you do this. It is a more passive method, for when you have too many berries and not enough space.

By this point, we all are very familiar with trading, but here is a reminder of how friendship level affects the stardust cost for trades. 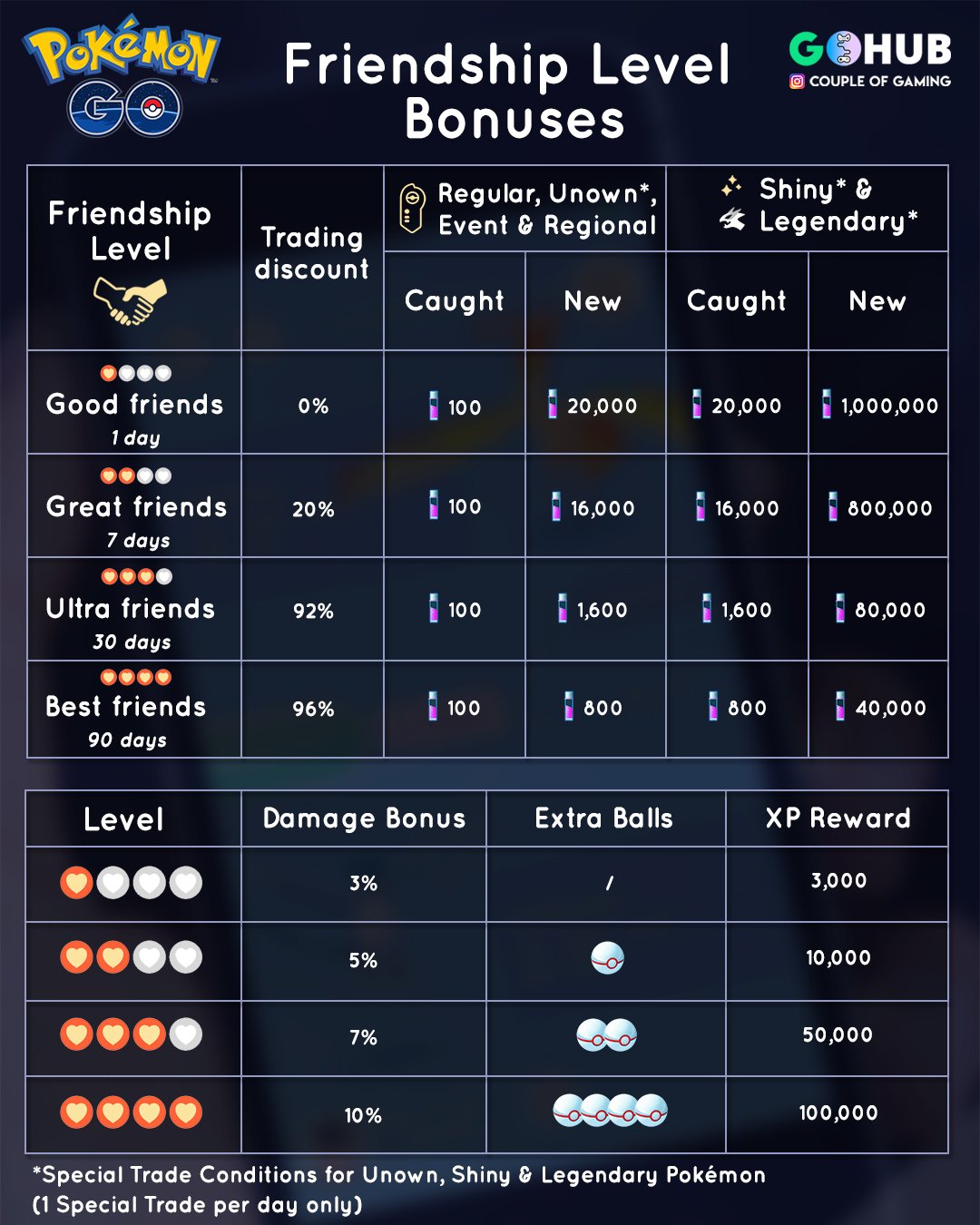 Yikes, that can get expensive. Our first tip, save those new shiny and legendary trades for Best Friends only!!! (Yes, even if they cry that Ultra Friends is ‘close enough’).

Our second tip is to catch enough Pokémon to make up for what you trade. One normal Pokémon = One normal trade. The trading limit for each day is 100, and though the majority of players do not hit that goal each and every day, trading 100 normal Pokémon back and forth costs 10,000 stardust. That is a lot of stardust I know I do not consider when I go on a back and forth trading spree with my friends.

Another very simple use of dust, you can use stardust and candy to unlock a second charge move on a Pokémon! Sadly, this is not cheap, especially in the case of legendaries. There are a few niche situations where good Pokémon have a cheaper cost for a second move, for example, the babies which only cost 10,000 stardust and candy. If you plan to give your baby Pokémon a new move, always do it before you evolve! After you evolve, it can start costing upwards 50,000 stardust!

Honestly, there is no other tip I have for giving your Pokémon a second move. If you want to give your Mewtwo Thunderbolt and Shadow Ball, you will just have to bite the bullet on that one. Choose wisely, 100,000 stardust is 1,000 regular caught Pokémon, or 800 weather boosted base evolution Pokémon.

Below is a chart of what classes of Pokémon require what dust and candy cost to give a second move, for your viewing pleasure. 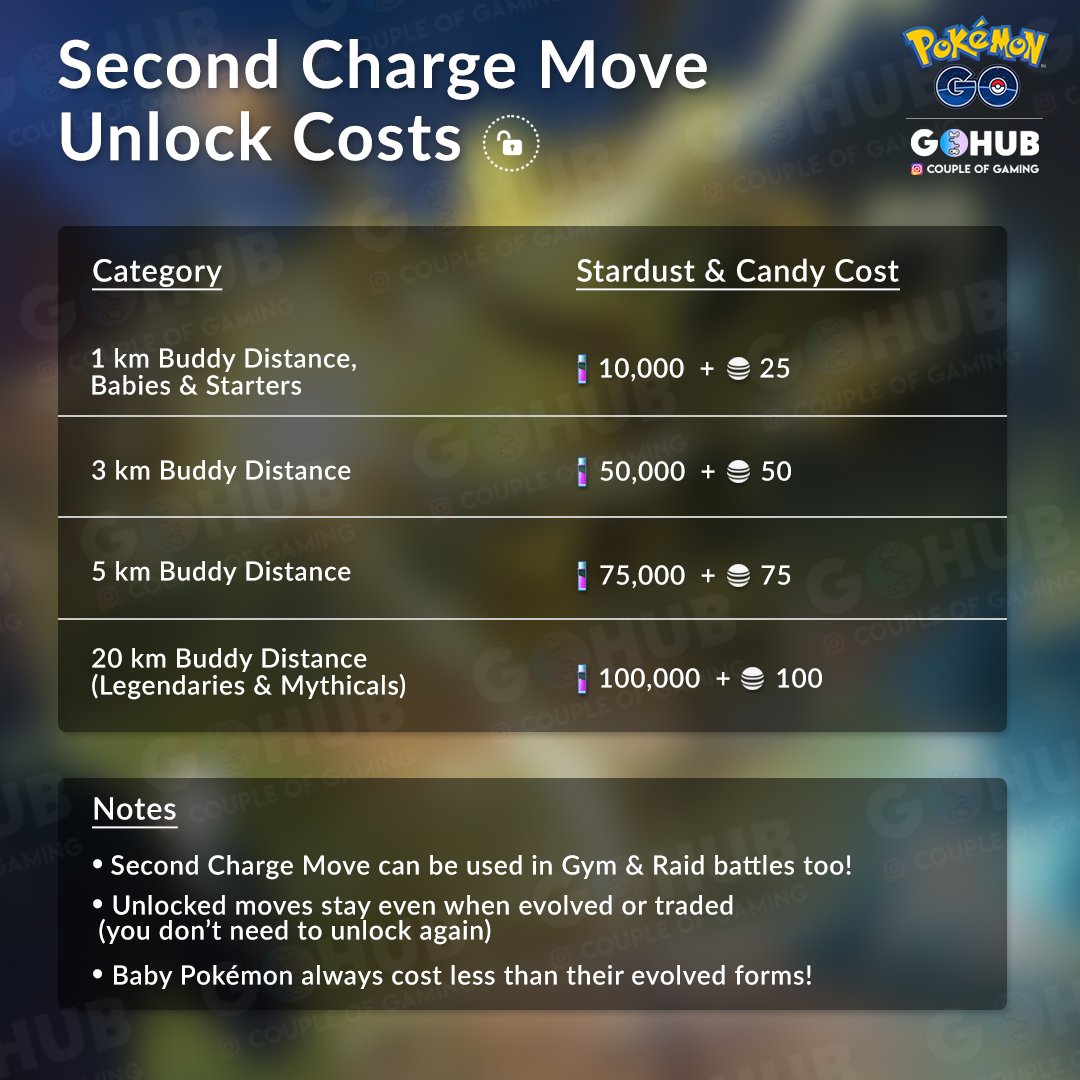 Now to the most important part, powering up. In the past and even now, powering up Pokémon is the heart and soul of a good PVP and raiding team. One can only get so far using all level 15, 20, and 25 research and raid rewards.

The cost of powering up a lucky Pokémon is a fantastic investment of stardust. Having access to luckies basically allows you to ‘max two for the price of one’. It costs less stardust to max a level 1 lucky Pokémon than it costs to max a level 25 weather boosted raid boss, or even a level 30 wild find if that speaks anything to you. Luckies also have an IV floor of 12/12/12, giving them a higher chance of being worthy of powering up. Sometimes, it is even worth it to max a lucky Pokémon just because (usually if it has 15 attack), even if it is not 90+% IV, because it is an easy investment (considering you have the candy, which in the case of legendaries, is the real issue here).

There are also more flaws with luckies, as they were introduced long after the trading feature was announced, and then after everyone traded away all their old Pokémon, Niantic announced a guaranteed lucky system! Not to mention, child accounts that have not been restarted entirely from scratch on Niantic Kids, still do not have access to ANY friend features, including trading, blocking them from getting luckies at all.

This article is meant to get you to think about all the different ways you can gain stardust and all the different ways you can use stardust in relation to how much of it you can get. This does not mean you have to go out maxing lucky Pokémon just because you can max two of them instead of one, but it does help people realize that maybe they should try to get more luckies (even though it is just that… luck based) and maybe even get some good power up worthy Pokémon.

Never be ashamed of maxing a Pokémon, trading a Pokémon, or giving a Pokémon second moves. People will always come at you with the “I only power up hundos” or, “I never make special trades” or, “Using stardust? I’ve never used it, I have 10 million”. What you do with your stardust is what you want to do with it. It can be replenished in more ways than one.