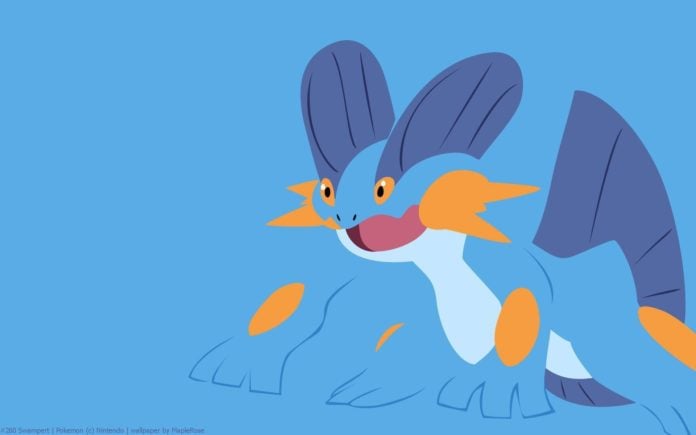 The final evolutions of starter Pokémon occupy a pivotal role in the Pokémon Go meta. All of them have decent to good stats, and are blessed with the Community Day exclusive move treatment. But none flexes their exclusive moveset better than the monster that the ever adorable Mudkip finally evolves into: Swampert.

Swampert always had potential, right from its introduction into Pokémon Go. It boasts of an absolutely amazing typing that makes it the only starter Pokémon to have a single type weakness (although a 4x one).

This typing also categorizes Swampert into a separate class of PvP oriented Pokémon known as the “mud bois” – a category that Swampert rules. It has a pretty impressive stat distribution for a starter, focusing more on longevity. Swampert was mostly an underrated performer, until the July 2019 Community Day hit the calendars and Swampert went full on beast mode with Hydro Cannon, one of the most powerful charge moves in the game.

The PvP meta favors Pokémon with balanced stats and a moveset that can not only deliver huge damage, but also waste your opponent’s shields. As we shall see, Swampert is tailor-made for this role. With one of the best moveset in the game and a great typing, this is one force to reckon with.

This write-up will show you why Swampert is one of the rare elite Pokémon with an astounding performance in any of the PvP leagues. Let’s dive into some murky waters and fish out a Swampert for your PvP team. It’s all worth it!

Swampert has a Maximum CP of 2974 at Level 40. It has a dual typing of Water and Ground and as such, is only weak to Grass

Swampert has the following stat distribution:

Swampert can learn the following moves in Pokémon Go:

Swampert is a solid pick in Great League and that is attributed to Hydro Cannon. With a single weakness, it is a very good lead fory PvP lineup. However, its performance in this league is not as dominating as it is in the higher leagues. There are two reasons for this:

Great League is an excellent playground for the various mud bois that have become a popular pick for PvP. With only Grass type to worry about and with fast charging moves, these Pokémon can bait out shields from your opponent and make the job easier for the rest of your team. Swampert is excellent, but its muddy peers like Whiscash and Quagsire have better Great League stats – relatively speaking. It’s not that Swampert is outclassed,  it’s just that those derpy mud bois are a wee bit more useful in this particular league.

Venusaur, a key performer in this league, can totally decimate Swampert. Venusaur’s typing also doesn’t make it susceptible to a lucky Sludge Wave by Swampert, which can trouble other Grass types.

Swampert reaches its prime in the Ultra League. Its Water and Ground type moves become seriously threatening out here, as many of the Ultra League relevant Pokémon take increased damage from whatever Swampert shells out.

Its Hydro Cannon is dangerous, even in scenarios where it deals neutral damage. It gets even more daunting going by how fast this move can charge up. Coming with Mud Shot, Swampert charges up its moves faster than anything else, and your opponent will probably burn down their shields right in the first match up. This is really important as Swampert can face almost any relevant Pokémon in this league.

Swampert dons various roles. It is an ideal teammate to some of the most popular Pokémon in usage and as an opponent, you absolutely need to be worried! Use it well as the line between victory and loss heavily rests on Swampert, when used.

It’s not every day that a Pokémon gets an affirmative thumbs-up in all three leagues. Swampert is probably the pioneering Pokémon in this aspect.

Swampert’s max CP may not go beyond 3000 like many of the top picks in this league, but what it does is pack a serious punch with its marvelous moveset. Be it Metagross, Dialga, Tyranitar, Melmetal, Lucario or Mamoswine… Swampert, a starter Pokémon, can sweep through them all. Isn’t that amazing?

From a defensive point of view, Swampert doesn’t have much to fear. Something like Venusaur is hardly ever used in the Master League, and no relevant Pokémon in this league have Grass type coverage moves either.

In a nutshell, its moveset and typing suffice in establishing Swampert’s position as a top tier Pokémon in any of the leagues. There are going to be Water Pokémon whose DPS and TDO surpass Swampert’s. In that regard, it is worth stressing once again over the fact that Swampert has the exceptional secondary Ground typing and a fast move that gets to Hydro Cannon lightning fast. It’s a chess match and Swampert may very well fetch you your checkmate.

Mud Shot has the fastest energy generation of any fast move in the game (except Lock On). It literally charges up moves at the blink of an eye. It gives you the best opportunity in PvP to make your opponent waste their shields as they have NO OTHER OPTION.

Why? Because of Hydro Cannon.

Hydro Cannon sports the highest DPE of all the charge moves in Pokémon Go. It just hits too hard. Couple that with Mud Shot, the fast move with the best EPT… and you’re blasting off massive damage in minimum time. Beat that!

Water Gun is the only other fast move and it’s a damage-dealing one at that. This moveset focuses more on dishing out the max DPS of all moveset combinations. This fast move helps Swampert drain some HP out of your opponent when Swampert itself is going down.

Earthquake is a super-powerful move that works very well as a second charge move. Despite Earthquake being sort of limited due to its 1-bar status, Swampert’s Mud Shot once again shines and helps charge up this potentially OHKO moves quicker than anything that’s not named Garchomp in the Master League meta. And believe it, having the ability to charge up an Earthquake super quick is a huge asset in this league as it can knock out some of the premier monsters here.

Surf is sweet. It can charge up quick in general, but the power of Hydro Cannon steps over it completely.

Muddy Water could have been better. If your role is to solely focus on Hydro Cannon (which you should), you can actually give Muddy Water a shot as a second charge move. There are a few reasons for this:

Muddy Water may not be amazing, but it is very interesting nonetheless. The high possibility of shield baiting, quick charge up and the possibility of lowering your opponent’s ATK stat. Yes, this is being repeated again as it can actually do wonders to your matchups!

Sludge Wave is meant to act as a coverage move against Swampert’s Grass type counters. However, Sludge Wave doesn’t do much against Swampert’s biggest fear: Venusaur (due to its own secondary Poison typing). The various Steel types in the Ultra and Master League completely resist this move. As such, it is better to skip it.

Should you unlock a second charge move for Swampert?

There is no compulsion in doing so, but since it’s cheap, feel free to do so!

Hydro Cannon has truly changed the fortunes for this ruler of the muddy throne. PvP is not always about having the highest DPS. Rather, it’s the moveset that makes the biggest impact on the meta. Accordingly, Swampert has struck gold right from the mud.

But its super powered charge move alone doesn’t make it uber strong. It’s the fact that it can get to that move lightning fast! The icing on the cake is that it has only a single type weakness to boot. What else can you ask for?

One of the most fantastic aspects of Swampert is that it has a mega evolution. If and when Niantic implements this, Swampert is literally going to be a threat of mega proportions. It’s like Swampert on steroids. Just look at Mega Swampert, for that matter!

Starter Pokémon are special. If you are among those trainers who love to include a starter in your team, then look no further than your (mud) boi, Swampert!