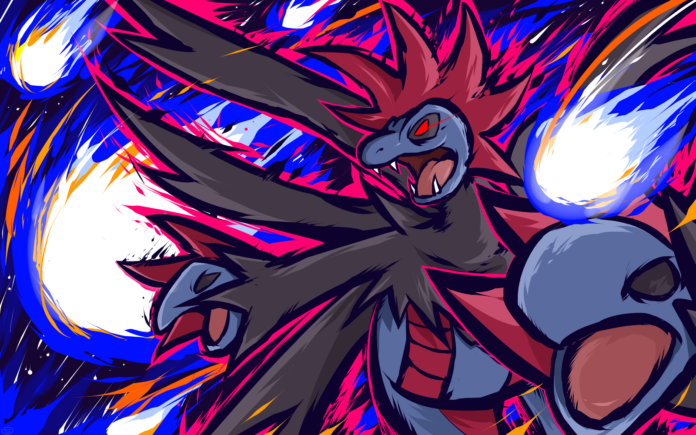 Categorized as the “Brutal Pokémon”, this monstrosity truly justifies that simply by the looks of it.

I mean, look at this Pokémon! A three-headed dragon with two lobotomized heads for hands and a mean streak of shredding apart anything that moves.

Eeks! No wonder its primary typing is Dark!

Add the fact that Hydreigon is Gen 5’s pseudo legendary, it is destined to be a powerhouse.

This gets more interesting when you begin to appreciate the fact that Hydreigon’s typing puts it in direct contention with all the pseudo legendaries except Metagross.

This article aims to shed a spotlight on probably the least talked about and least used pseudo legendary in the game. I will explore its current viability and place in the meta, while also speculating on whether Hydreigon can climb up the ranks in the future through its Community Day.

With that being said, let’s see just how dark this dragon can get…

It has a dual typing of Dark and Dragon and as such, is weak to the Dragon Ice Bug Fighting and Fairy types, with the Fairy type weakness being quadruple.

That Fairy type weakness has always been a bane to the glory of Hydreigon even in the competitive scene. An additional weakness to the Fighting type really hurts it as well. Both of these factors hamper Hydreigon’s usage to a large extent as Charm and Counter are two of the most popular moves in PvP, STAB or not.

So in terms of its typing in Pokémon Go, the only silver lining to this dark cloud is its Dark typing which, when combined with the secondary Dragon typing, let it heavily resist Psychic attacks while also dealing super-effective damage in return.

On this regard, it is worth mentioning that Hydreigon is armed with a good number of resistances including the Psychic, Dark, Electric, Fire, Ghost, Grass and Water types.

Hydreigon has the following stat distribution in Pokémon Go:

Its stats definitely look good on paper. It’s a pseudo legendary, after all!

But the real problem with Hydreigon comes in its moveset. So it’s only natural that I get to that very section now…

Hydreigon can learn the following moves in Pokémon Go:

For starters, let’s check out its current viability, shall we?

Flash Cannon is just garbage on Hydreigon. It will go down to Charm even before it gets halfway to a Flash Cannon. Avoid this at all costs.

I mean, Outrage gives you a whopping 110 DMG at just 50 and 60 energy in PvE and PvP respectively.

Dragon Pulse takes the same amount of energy generation as Outrage in both PvE and PvP, and deals only 90 DMG! Talk about “underwhelming”! While Dragon Pulse obviously won’t ever be more damaging than Outrage, it deserves to at least have a tad lower energy requirement to be on talking terms with Outrage.

So while Dragon Breath is undoubtedly an amazing fast move (especially for PvP), Dragon Pulse is such a letdown. Consequently, Hydregon as a Dragon type just doesn’t make the cut in terms of raw power like Rayquaza or Salamence, doesn’t account for reliability like Dragonite, and doesn’t fulfill specialized niche roles like Garchomp.

As a Dark type attacker though… Hydreigon impresses.

While the DPS churning out of its ATK stat and moveset doesn’t rival the likes of Darkrai, Weavile, and even the upcoming Zoroark… it does manage to out damage the fearsome Tyranitar.

However, Tyranitar still sports higher TDO courtesy of its good bulk. As such, Tyranitar is definitely a more dependable Dark type in the long run.

See, Hydreigon isn’t bad by any means. It will definitely aid you well in both PvE and PvP against Psychic and Ghost types.

But… it lacks the oomph which the remaining pseudo legendaries posses.

Even Tyranitar, who is outclassed in both the Rock and Dark typing manages to leave an impression in the meta and has a very practical scope to get even better in the meta. You may check out my Tyranitar Meta-Analysis for more on this!

Which leaves us with the burning question…

Can Hydreigon get better in Pokémon Go?

Will a potential Community Day exclusive move make it the monster that it’s touted to be?

Future Sight on Hydreigon: “It’s not so effective!”

Let’s go with the most obvious one if Niantic decides to take the textbook approach of giving Outrage to their Unova pseudo legendary Dragon type.

With Dragon Breath and Outrage, Hydreigon will trail behind the current Haxorus with Dragon Claw, Haxorus with a hypothetical Outrage; Dragonite, Salamence, Zekrom, Garchomp, Rayquaza, and Black Kyurem (all with Outrage); Dialga with Draco Meteor, and White Kyurem with Dragon Pulse.

Even with a devastating move like Outrage, Hydregon’s stats just don’t let it shine through and simply stay behind in the dark (pun intended).

Draco Meteor was an alright charge move to be given to Dragonite on its Community Day. This is because our OG dragon dominates the meta even without this meteor showering move.

But Hydreigon shouldn’t be given this move. It would just be a shame as Draco Meteor doesn’t help Hydregon in any way whatsoever.

Niantic has been gracious enough to keep adding new moves to the meta every now and then.

Dragon Rush is a very powerful Dragon type move from the main series games and was, at one point in time, Garchomp’s signature move.

This makes Dragon Rush a worthy competitor for a potential Garchomp Community Day. Since Garchomp already learns Outrage and excels in the meta already with its impressive fast moves in Dragon Tail and Mud Shot, the only way to make something like Dragon Rush viable would be to have a lower energy cost than Outrage (Dragon Rush has never had more DMG than Outrage in the competitive scene anyway).

Assuming Dragon Rush to be a Dragon type Meteor Mash clone and since Grachomp comes before Hydreigon, how do you think our Hydra would fare?

Well, even with something like Dragon Rush, Hydregon’s 252 ATK lets it down and it still trails behind other dragons. Sigh!

Hydreigon’s inferior stats, when compared to other pseudo legendary dragons, its Gen 5 dragon comrade Haxorus and other legendary dragons, puts it at an awkward spot where it will not outclass them in overall performance irrespective of any moveset.

Hydreigon already gets access to Bite and Dark Pulse.

It does not learn Foul Play, the best Dark type charged move in the game currently.

Its only option from the current Dark type movepool is the spammy fast move: Snarl.

With Snarl and Dark Pulse, Hydreigon is outclassed in terms of DPS by Darkrai, Zoroark, and Weavile. As such, while Hydreigon gains significantly from its Bite and Dark Pulse combo, it still isn’t enough to out damage the same Pokémon that already out damaged it earlier with Bite.

However, unlike Hydreigon’s poor showing as a Dragon type, it earns some bragging rights with a very good TDO which ends up making a good Dark type attacker overall with Snarl.

The Dark type Payback was set to be the exclusive move for a Machamp Community Day, should it have won the voting.

This clearly shows that Niantic is more than ready to introduce Payback into the game.

Brutal Swing is a recent Dark type move introduced in Gen 8. With all the hype around Pokémon Sword and Shield and Hydregon’s designation as the “brutal Pokémon”, Brutal Swing seems to be a justified move.

But how damaging should either of these moves be to make Hydreigon more viable?

Assuming those moves to have the same damage output as Foul Play (the #1 Dark type charged move in the game) and paired with Bite, Hydregon is left in more or less the same position: Outclassed in the DPS department but very good in TDO.

Hydreigon definitely shines brighter as a Dark type. The irony!

None of the current moves like Snarl or even a clone of Foul Play would make Hydreigon compete in DPS with some good number of Dark types. Its TDO remains its biggest draw though.

The message is clear…

In order to make Hydreigon an exceptional Pokémon, the damage output of Payback or Brutal Swing should surpass that of Foul Play. In other words, a new best Dark type charged move in the game would turn the fortunes for Hydreigon.

While this article meant to shed light on Hydreigon’s future, it is worth addressing this monster’s current viability for one major reason…

This emo dragon’s final evolution may not be the most overused dragon or pseudo legendary alike, but it still does a pretty good job in both PvE and PvP.

Hydreigon is a decent addition to the Master League meta with its ability to create pressure on Metagross, Dragonite, Garchomp, and check Mewtwo.

This is attributed to the fact that both Dragon Breath and Bite are excellent PvP moves in terms of damage output. Add STAB to the mix and you have got a Pokémon that you definitely cannot ignore.

Not great, but definitely serviceable.

With the lack of an ability to apply shield pressure and fast moves that require a good deal of energy to charge up its relatively costly charge moves, there are way better options to take on Team Go Rocket.

This is Hydreigon’s best usage at the moment. Hydreigon leads Tyranitar and performs second only to Darkrai in terms of countering Psychic and Ghost types, as a Dark type.

But if you are looking to best the raid clock and finish the raid sooner, there are better Ghost type options to out-DPS Hydreigon.

Nonetheless, it is undoubtedly a great Pokémon to add to your battle party!

A pseudo legendary Dragon type is always a good option to take out gyms.

Its ability to do better than Tyranitar definitely makes it count.

The popular opinion among the Pokémon Go community is to give Hydreigon the Metagross Community Day treatment.

A Dark type move that outclasses the current Dark type moves in the game and turns Hydregon into a fearsome threat that it should be.

However, in Mertagross’s case, Meteor Mash really didn’t have much competition.

I mean… how great were Flash Cannon and Iron Head anyway? Plus, the Steel typing generally lacks hardcore attackers.

However, both the Dark and the Dragon typing have fierce competition.

The Dragon type is technically a lost cause for Hydreigon. Neither the current best Dragon type move or an OP future move would make any difference for our King Ghidorah Pokémon.

The Dark type does hold potential! Niantic can make Payback or Brutal Swing incredibly powerful and let Hydreigon levitate (see what I did there?) and rise high!

Hydreigon is one of my personal favorites and I truly hope it gets a powerful move that does justice to its pseudo legendary status.

They say third time’s the charm (not that Charm!). So it’s up to Niantic to not slay Hydreigon.

High time that Niantic lets Hydreigon rise high into the dark skies and brutalize the meta.