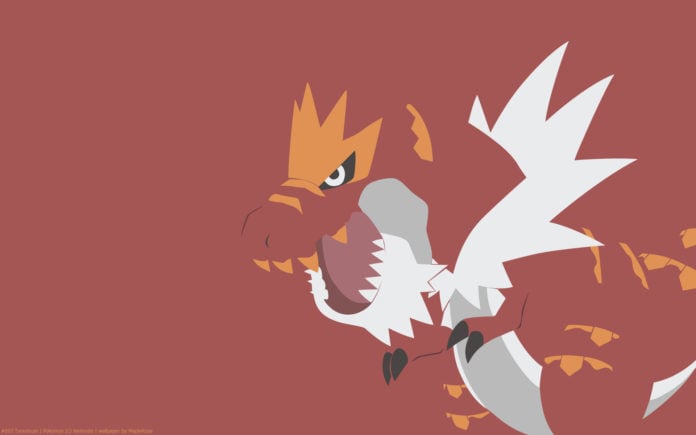 It took 6 whole generations for us to finally have a Pokémon that is based on a T-Rex.

Jurassic Park has captured the imagination of countless people from all over the world, making the T-Rex a cult figure.

As we foray into the Kalos region, we are not going to come across just any T-Rex Pokémon.

This one is a Dragon type!

The Tyrantrum family is the first and only Pokémon to have the Rock and Dragon dual typing and is also one of the Fossil Pokémon of Gen 6 along with the Aurorus family.

With such an iconic Pokémon all set to grace Pokémon Go, how will it square off in the Rock and Dragon type departments?

And if Tyrantrum does pale in comparison to the various legendary and pseudo legendary Pokémon dominating its individual types, does it fulfil any specific niche in the meta?

This write-up takes you to the lair of this Regal Pokémon and projects whether this draconic beast from prehistoric times is truly worth the crown on its head.

It has a dual typing of Rock and Dragon and as such, it is weak to the Dragon Fairy Fighting Ground Ice and Steel types.

It has a handful of resistances, including the Fire Electric Flying Normal and Poison types.

The combination of Rock and Dragon is offensively really good, with Steel being the only type that resists both its STAB moves.

Defensively, this dinosaur pocket monster wishes it could have seen better days.

Not only is this dragon weak to the typical weaknesses to Dragon Fairy and Ice, but it is also weak to common offensive types such as Fighting and Ground, and probably the biggest bane in Tyrantrum’s stride: Steel

No wonder it went extinct.

Tyrantrum has the following stats in Pokémon Go:

Its ATK stat, for instance, is higher than most starter Pokémon in the meta and its bulk is just passable.

Whether it is the typing or the stats, it is clear that Tyrantrum is built to be an offensive beast that has pretty average bulk and quite a few weaknesses to boot. But does it justify its 227 ATK stat?

That we will find out from its movepool which, I can guarantee you, is going to be interesting!

Tyrantrum can learn the following moves in Pokémon Go:

Do you mean small hands, a big head and a charming face??

You don’t just give Charm to a prehistoric and amazing looking T-Rex dragon! That’s so offensive. Yes, Charm can help it stick up to its Fighting type weakness but with that underwhelming bulk and that long list of common weaknesses, Tyrantrum is badass but just not charming enough!

On the brighter side, Tyrantrum has actually got access to some really cool STAB moves! It indeed is a good time for this dinosaur to be alive.

Dragon Tail and Outrage is the bread and butter Dragon type moveset. So much, that it has become almost stereotypical. I’m not complaining though as this set is undoubtedly the best Dragon type moveset for PvE. It is also the best moveset combination it could have got as it does not learn Dragon Breath in the main series games.

Rock Throw is again the best Rock type fast move it could have got as Tyrantrum doesn’t learn Smack Down.

From the charged moves angle, while Stone Edge is definitely a great Rock type move to use, it has more potential.

In that main series games, Tyrantrum is infamous for using the Rock type physical move: Head Smash. Coupled with its Hidden Ability, Rock Head, Tyrantrum took no damage from Head Smash’s typical recoil. As such, Tyrantrum is one of the best users of Head Smash.

Could a future moveset addition update give Tyrantrum access to Head Smash and make it a more threatening Rock type attacker? Only time will tell.

Crunch is usable due to it being Tyrantrum’s cheapest charge move.

Earthquake is just not viable. You are better off with Outrage or Stone Edge due to their STAB and cheaper energy costs in PvP.

Tyrantrum doesn’t excel as either a Dragon type or a Rock type. Its problem doesn’t really lie in its movepool (which is honestly fantastic), but rather its typing and the competition it faces in both its types by virtue of its stats.

But hey… competing against the likes of Rayquaza, Salamence, Garchomp, Tyranitar, Rampardos and Rhyperior, and coming up short is not really bad after all!

What is Tyrantrum’s best moveset? Rock or Dragon?

Tyrantrum gets amazing STAB moves for both its types. However, in order to determine which typing is more viable for this jolly ol’ dino, we will have to check out the competition.

The competition in the Dragon typing is too fierce. Rayquaza has been a raid boss multiple times, Dragonite has been around from Gen 1, Bagon has had a Community Day and Gible has been prominently available on multiple occasions. Even if you missed out on Salamence on Community Day, you would still have loads of legendary/pseudo legendary dragons at your disposal who bear the flagship Dragon Tail and Outrage set

However, things look a bit brighter from the Rock side…

So relatively, Tyrantrum would be more welcome as a Rock type spot in your party.

Therefore, Tyrantrum’s best moveset is Rock Throw and Stone Edge OR Dragon Tail and Outrage, if you really need another Dragon in your party and need higher DPS.

Tyrantrum undoubtedly has a really good typing and a fantastic movepool.

But… where does it fit into the PvP scene?

For starters, Tyrantrum’s stats are too oriented towards offence that hinder it from truly excelling in the Great or Ultra League meta, where bulk matters.

Secondly, as a Rock Dragon type, it goes down to common Great and Ultra League threats such as Azumarill, Registeel, Cresselia, Togekiss and of course, Giratina.

The only niche is that it won’t go down toothless to Togekiss. With Rock Throw, Tyrantrum will deal some appreciable damage before it falls like a house of cards to Togekiss’ Charm.

With a 40 Level CP of 3128 and those common weaknesses, it simply can’t be expected to do well in the Master League. All those rampaging Dragon and Steel types, Togekiss and the occasional Fighting types… Dragon Breath, Charm, Counter, Bullet Punch, Counter…

Tyrantrum is critically endangered in this meta.

With good offensive stats and the best-case-scenario moveset in both Rock and Dragon types, Tyrantrum fares a lot better in PvE.

It can absolutely annihilate Fire and Flying types, as it is not only super-effective against them but also resists their moves. It is definitely a good Pokémon to include in your Mega Charizard Y raid party.

Ultimately, it is definitely a worthy addition to your Rock type squad and even your Dragon type squad to a good extent.

You can take respite in the fact that Tyrantrum won’t disappear into oblivion. It may not be the most ‘meta’ Pokémon from Gen 6, but it is undoubtedly one of the good ones.

Tyrantrum’s solid offensive dual typing of Rock and Dragon would definitely serve you well and you will have fun using this amazing looking beast.

If not for anything else, just imagine Tyrantrum as your buddy!

A huge T-Rex dragon with a royal design chasing you around on the map?