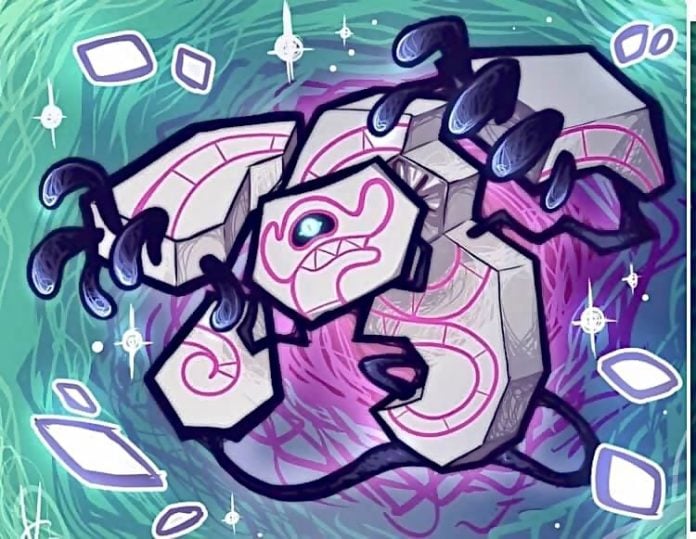 Hello Trainers! Pokémon GO 0.189.0 is slowly rolling out.  This update has a lot of stuff regarding the AR scanning feature for Pokéstops and Gyms, but it also has some hints as to what might be coming with the Halloween event.

You can read the official release notes here

A new Halloween logo was added, it’ll probably be featured prominently during the event.  Probably on the Today tab.

An odd coincidence that Runerigus would be added this close to when we should start expecting the Halloween event announcement. For those unfamiliar, Runerigus is the evolution of Galarian Yamask.

Sableye’s going to be getting the costume treatment.

Dark Void is the Signature move of Darkrai, so its addition would suggest that Darkrai is coming back to Tier 5 raids at some point, perhaps as part of the Halloween event?

When looking at your friend’s list, gifts that have a sticker with them will show up with a sticker icon.

Stickers in your Inventory

Stickers also show up in your inventory now, with a note that they don’t take up inventory space.  Also clicking on that icon does nothing.  Weird.

Hints at a separate sticker inventory were found a while back, this seems to confirm its future existence. Clicking on the stickers icon in your inventory will do something eventually.

A slot for a facemask has been added, Halloween masks, a Verizon mask and a basic mask have all been datamined previously.

This appears to be a setting for a default filter for when you open up your Pokémon storage.  No hints at being able to customize this at the moment.

Permission for using the location in Android 11

There’s a lot added for this, a LOT.  I’m not going to include it all.  For more on these entries check out the Pokéminers Reddit post linked at the top.

It would appear that the AR mapping quests will be geofenced, which means you’ll get specific quests based on where you are.  They’ll probably use some size of S2 cells for this, and give you quests based on stops/gyms that are in the cell your in, or nearby.

The game will direct you to stops that need to be scanned.

Some updates to the POI scanning itself, such as more checks to ensure trainers meet the level requirements and checks to see if the feature has been enabled.

Interesting here is the get_AdventureSyncProvider, and the GeoFence stuff.   Will we be getting the ability to change the apps we can link Adventure Sync too?  Maybe adventure sync will be able to use our location as well as our steps?

We should expect an announcement on the Halloween event pretty soon.  The Autumn Event runs until Monday, October 19th so perhaps we’ll get an announcement shortly after that event finishes.

The possibility of Darkrai coming back to raids with its signature move is exciting, and the potential for a couple of new Pokémon as well!!  Ok, one brand new Pokémon and one new regional variant.

The Halloween event is one of the more popular events of the year for Pokémon Go trainers around the world, are you excited for this year?