a reddit thread has popped up recently showing a curious e-mail sent out by Niantic (via [email protected] account) to one very lucky Pokémon GO player.

The email starts with “Happy Holiday!”, quickly reminding the player that a lot has happened in Pokémon GO recently and that new items are available in the game.

The player is then given a promo code that can be redeemed for two Super Incubators and one Premium Raid Pass, valid for the next three days before it expires.

The remainder of the e-mail discusses Dynamic Weather, promoting the notion of everyday being a new adventure and reminding that it’s now possible to encounter weather related spawns and that certain move types are boosted during different weather conditions.

The body of the e-mail is available below: 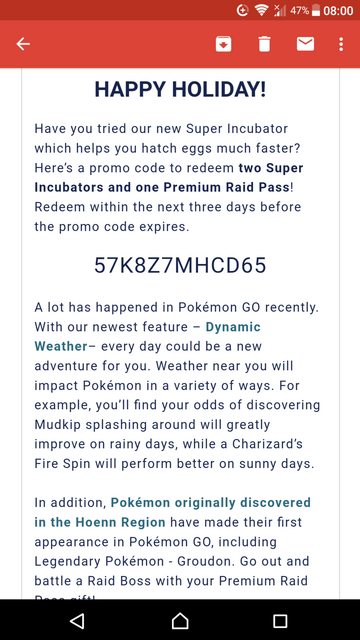 No new info has been shared in the e-mail, but it is very interesting to see Niantic reaching out to players that have been inactive for a long time, trying to reinvigorate and re engage the inactive player base.

We are not 100% certain, but the email doesn’t look like a reward item for active players, but rather like a “come-back-the-game-is-better-now” type of email frequently sent out by publishers and game developers.

This is further reinforced by the thread author himself, as he states that this is his second (ToS breaking) account that he uses for various controversial activities:

This is not my main account, it’s an account I’ve made to shove gym shovers last year, and I’ve never used it regularly, so you could look at it either way. I do use it occasionally now to see who’s in a lobby, or to encourage people to get in.

We haven’t received any reports of active players getting a similar e-mail. Hopefully this will change soon.

Our thoughts on the matter

We find it quite controversial that only inactive players receive emails like this, but we understand that it’s a bottom-line oriented business decision. However, it would be a fair move to offer the same deal to active players, as they are the ones keeping the game alive and fresh.

We feel like the hardcore players are being treated the worst, as they receive no benefit nor acknowledgment for their dedication, spending habits and time spent playing the game.

Two Super Incubators and a Raid Pass is not much, so why not extend this “deal” to everyone? After all, it’s a holiday season — is there a better time to give out free stuff?