we are super excited to report a few new observations we’ve made and confirmed over the past 3 days, that change our perspective of Ingress and Pokémon GO relationship! We finally have it, the time of the fabled daily Ingress-Pokémon GO sync!

We have managed to confirm these observation by tracking import patterns in relation to Ingress portal submission results. All Ingress portals that are approved before 18:30 GMT are considered for the daily import, but not all portals are imported.

In other words — every day there is a chance you’ll get a new PokéStop or Gym in your area, depending on your luck and active OPR reviewers in your wider area.

The following portal (Franjo Tuđman, first Croatian president) was added two days ago at 18:30 GMT (20:30 in Croatian local time) and we tracked the following stats: 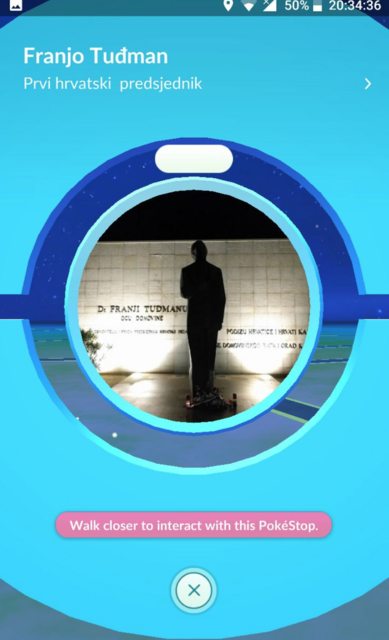 A similar pattern was observed for Crkva Rušinac, another portal that got approved on OPR on the evening of September 26th, just after the daily sync of 26th has ran.

In locations where Ingress is more popular, OPR agents tend to go on deny streaks, as it’s the most efficient way to earn Recon medal points. In turn, many portals get denied with no good reason – it happened to us, it will happen to you too.

Additionally, maybe it’s not a bad idea to go out every evening around 18:30 GMT (check your local time equivalent using this link).