Man, what a time to be launching into GO Battle Day. I imagine most of you have experienced it firsthand, but PvP is a hot mess right now, isn’t it? Hopefully Niantic gets it sorted out soon, because we are mere hours away from the next special Battle Day event: this time focused on Mankey. As with last season, where we could evolve our very own double Legacy Dewgong, this time around we can evolve our own Primeape with Legacy Cross Chop. Fun!

…assuming the game works long enough for us to actually DO so. 😬

Anyway, I wanted to take this opportunity to dive into Primeape in PvP. I would argue it’s already pretty underrated as a Fighter that stands just as tall as Machamp and other big name options… and Cross Chop arguably makes it even a bit better!

But I’m getting ahead of myself. Let’s start with our formal Bottom Line Up Front.

Pretty simple, right? Well, here’s the details behind that, starting with the stats….

Pure Fighting type, so no funky resistances or STAB on non-Fighting moves. As a mono-Fighting type, Primeape is vulnerable to Flying, Psychic, and Fairy damage, and resists Rock, Dark, and Bug damage. Simple and easy.

So next the stats. You’ve probably read enough of these by now to notice the sub-100 Defense as an eyesore. (Good job! Have a cookie. 🍪) Primeape ALSO has below average HP. That said… this isn’t unusual for Fighters. Here, let me show you with a quick side-by-side comparison of average stats at Great League level:

Primeape is even a bit flimsier than most of these others, but as you can see they’re all in the same ballpark. And having a higher Attack may actually prove to be a blessing a disguise soon… but more on that later. For now, the moves!

That said… there MAY be some consideration for Legacy Karate Chop as well. There’s a noticeable drop in power, but 4.0 EPT is nothing to sneeze at. We’ll peek at it later and see how that goes.

During GO Battle Day on June 18th, Mankey will be a guaranteed reward encounter from 11:00 to 2:00 local time, and Legacy Cross Chop is coming back during that same time period and two additional hours afterwards. So evolving Mankey between 11:00 and 3:59 local time will result in a Primeape that knows Cross Chop! 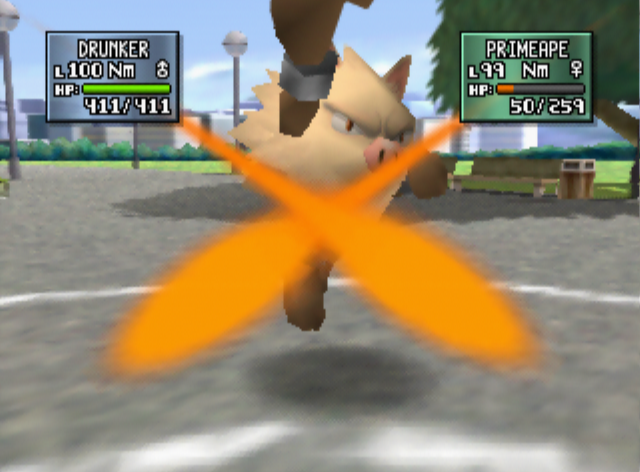 The question, of course, is how badly do you actually WANT that? Primeape has already popped up in Limited formats with existing moves… some mix of Night Slash and/or Ice Punch for coverage, and sometimes Close Combat for closing power. It’s actually a very intriguing moveset for a Fighter, with coverage against Psychics and Ghosts (Night Slash) AND Flyers (Ice Punch), leaving only Fairies uncontested among Primeape’s primary threats. Some quick pickups of note with each of those coverage moves:

To be worth getting, Cross Chop needs to replace either coverage or the KO potential of Close Combat. Does it find a way?

As per usual, I need to first set our barometer. So here are the sims, in 1v1 shielding, of Night Slash/Close Combat, Ice Punch/Close Combat, and both coverage moves. Some quick hits on the differences:

So in order of maximum effectiveness, the favorite from the above is Night Slash/Close Combat, which can beat everything already described besides Altaria and Venusaur.

Now how does Cross Chop compare? Note that it and Night Slash have the same cheap cost, so presumably it should share most of Night Slash’s wins, right? Thankfully, that’s a resounding yes: Cross Chop/Close Combat beats everything in 1v1 shielding that Night Slash/Close Combat does, and adds on Shadow Ninetales AND beats nearly everything with more HP leftover, since Cross Chop gets STAB damage and thus hits harder (against neutral targets) than Night Slash. Aside from giving up potentially important coverage that comes with Night Slash, one could argue that Cross Chop is strictly better.

And it WILL be strictly better in Fighting Cup. Remember that Fighters resist Dark damage, so a Night Slash Primeape in that format (or any other Fighter-heavy format) will usually be a disadvantage as compared to Cross Chop Primeape, which hits for unresisted damage. 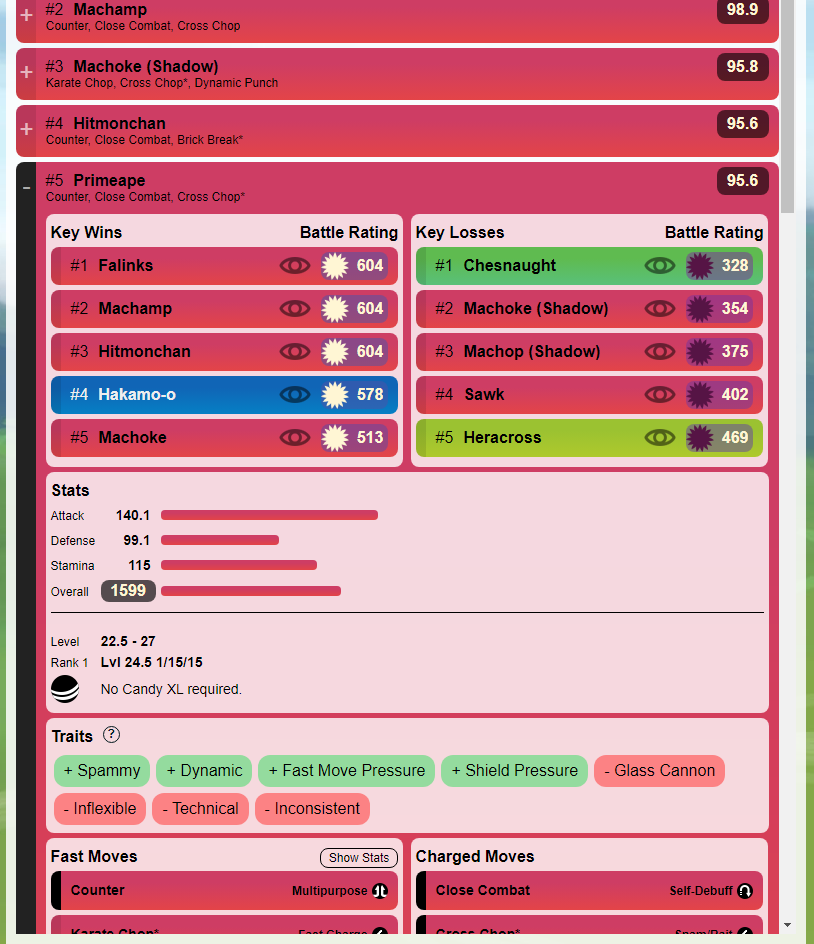 In fact, Cross Chop Primeape is the #5 Pokemon in Fighting Cup, simply outracing a ton of the meta. Here is entire list of what it can’t beat in 1v1 shielding in Fighting Cup: Poliwrath, Sirfetch’d, Sawk, Shadow Machoke and Shadow Machop, and Chesnaught. Fellow Cross Choppers Machoke and Machop win only because they run Karate Chop (which, as a reminder, generates energy faster than Counter), Sirfetch’d gets to fire its own 35-energy move (Leaf Blade) faster because of having higher Attack than Primeape (and winning Charge Move Priority as a result), and the others just win because of their own oddball movesets. Cross Chop Primeape can beat everything else in Fighting Cup. That includes Machamp (where Primeape’s higher Attack is a blessing, not a curse, as it consistently wins CMP even with a 0 Attack IV), Falinks (which is somehow ranked #1 in the format thanks to the speed and power combination of Superpower), Kommo-O, and even Fighting-resistant Heracross and Toxicroak.

But what happens if we mix and match the other coverage moves in (alongside Cross Chop) rather than Close Combat?

So let’s do a very brief recap of all that before we take a quick look at Ultra League….

Much shorter discussion here, I promise. To keep it simple, you really kinda NEED Close Combat at this level. Without it, things like Swampert, Politoed, Alolan Muk, and Alolan Ninetales start to slip away.

So assuming Close Combat is filling one slot, we get into the minutia of what Night Slash, Ice Punch, and now Cross Chop bring to the table.

In short: Cross Chop is a viable alternative in Ultra League, not greatly enhancing the (admittedly a bit underrated) effectiveness of Primeape in the UL meta, but certainly working if you feel like building one. That said… I would probably still recommend Night Slash or Ice Punch if I were to build an Ultra League Primeape, as the coverage they provide is, I think, more important than just spamming out more Fighting damage with Cross Chop.

So, one last time, I definitely recommend building a Cross Chop Primeape for Great League. Ape is a little underrated as it is, and at the very least deserves some attention in Cup formats, particularly the Fighting Cup arriving later this season. And while I DO think it’s “worth” it to build an Ultra League Primeape if you happen to have the resources, it’s a much lower priority to give it Cross Chop. On paper it’s a slight improvement over other options, but in reality I think you’ll want the coverage of Night Slash or Ice Punch more.

Right, I did say I’d circle back on this.

So Karate Chop is also a Legacy move, and NOT coming back during this event. To get it and Cross Chop together, you’d have to either have one from way back that already has both moves (from before they became Legacy), or get yourself a Cross Chop Primeape now and Elite TM Karate Chop onto it later.

But I don’t really recommend that. Karate Chop is an overall downgrade… while it DOES manage to outrace Shadow Walrein that Counter cannot (and that’s no small thing!), it loses to several things Counter beats instead, to include Skarmory, Mandibuzz, Galvantula, Meganium, Stunfisk, and Toxicroak. Generating more energy and getting to more charge moves, faster, obviously has its advantages, but giving up 1.5 Damage Per Turn to gain only 0.5 Energy Per Turn (as you do when you drop from Counter to Karate Chop) is just giving up too much, it would seem. Other Pokemon make Karate Chop work without needing to Elite TM it, primarily Machoke (who, believe it or not, is ranked #3 for Shadow and #6 for non-Shadow in Fighting Cup!).

Alright, that’s it for today. I opted not to go into a ton of shielding scenarios and all in the article and keep things simple, though I DID check and can assure you that it’s a very solid move in other scenarios that remains comparable (at worst) to Night Slash and Ice Punch. Get it while you can! I don’t know that it’s worth a future Elite TM, but it IS worth a quick evolve during the event window. I think the 1v1 scenarios alone paint that picture well enough!

Thanks for your faithful readership, and happy evolving this weekend! Stay safe out there, and catch you next time, Pokéfriends.