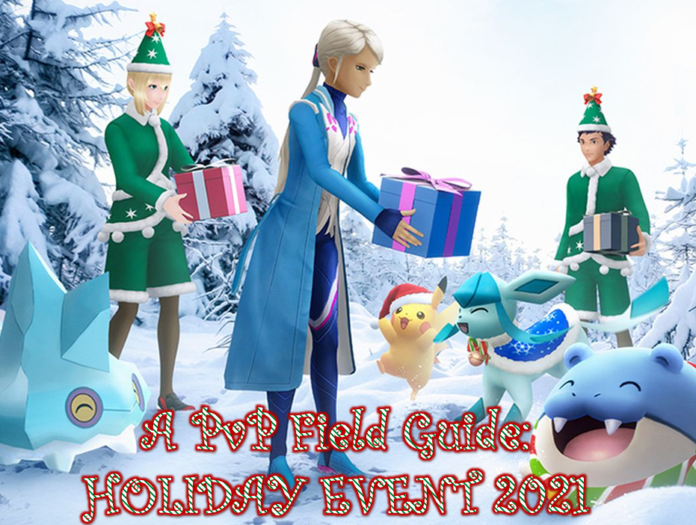 Hello again, fellow PvPers! I’m hard at work analyzing Powder Snow/Icicle Spear Walrein and the Sinnoh Cup meta ahead of their arrival after the New Year (expect those analysis articles BEFORE the New Year), but with us hitting the midpoint of the ongoing Holiday Event and officially moving into Part II now, I wanted to take a quick moment to answer a question I’ve gotten in a few DMs: is any of this stuff worth it?

Well, as far as Avalugg and Mr. Rime are concerned, I already looked, and yes, yes they are. Especially Avalugg, which looks to be legit in all three leagues and especially Master League moving forward. (Of course, so potentially does post-Community Day Walrein, but we’ll talk about that another day.)

But what about all the other stuff? Aside from the somewhat obvious (good Snovers to turn into good Abomasnows, good Snorunts to turn into Froslass, good Swinub for Piloswine and especially Mamoswine), any of these other spawns and raids worth our time for PvP?

Let’s start with the costumed stuff. While they (mostly) cannot be evolved for… uh… Niantic reasons, I guess, that doesn’t necessary mean they’re useless. Perhaps some of them can make a dent in PvP even in their current form?

Little ball of squishy fun SPHEAL is perhaps the most disappointing “no evolving for YOU!” spawn of the event, seeing as how eventual Walrein is about to crash onto the scene in January, and even middle evolution Sealeo is probably better than you think in the right meta. But those are irrelevant to this discussion… is Spheal itself worth anything, especially if we landed an obviously-over-chilled purple (shiny) one? To answer that, we’d have to look at Little League, which PvPoke thankfully added back to their site just a couple days ago, and that answer is… uh… definitely maybe.

The number of wins isn’t all that hot, but check out some of those names: Seel, Barboach, Igglybuff, Vulpix, Skorupi, Umbreon, Skarmory, Swinub, Nidoqueen, and with the right IVs, Galarian Stunfisk too… kind of a who’s who of greatest hits from Little Cups we’ve already had, right? I think it’s probably worth holding on to any decent PvP IV Holiday Spheals you find during the event. With the same Body Slam spam that makes Sealeo good in Great League Cups, Spheal might be a great show-off piece in future Little Cups.

I don’t have quite as good a feeling about it, but you can kind of say the same about CUBCHOO. You have to like the Powder Snow/Icy Wind combo, with Play Rough as a handy closer. It operates as a solid Ice, besting the Flyers and Grasses and Grounds you’d expect, including even constant Little Cup pest Ducklett, and can wear down stuff like Igglybuff and even Seel too. It’s overall kind of a specialized role, and being mono-Ice means it won’t work in some metas that allow Waters but not specifically Ice types (where stuff like Spheal could play but Cubbie couldn’t). But there’s enough potential there to recommend holding decent sub-500 CP ones you find. Bonus points if shiny, of course!

There is one costumed candidate we CAN evolve: Santa Hat Pikachu! The little guy itself is very solid in Little League (with or without an Elite TM), but of course, its evolution Raichu is pretty awesome in Great League and even in Ultra League if you’re swimming in XL Candy. And if you’re not, well, all those Pikachus out there is a great way to grind for XLs, right?

Then there are the costumed Pokémon that come without need to evolve. STANTLER is unfortunately useless right now, despite awesome charge move options, because it has no vaible fast move. Hopefully that’ll change at some point down the line. As for DELIBIRD… it’s really not any better in even the best of circumstances, and without Legacy Quick Attack, far, FAR worse than even that. 🤢 At least GLACEON, dressed up or not, has some utility in Ultra and Master Leagues.

What about the non-costumed stuff? Just a quick glance through those, as none of these are new, but it’s good to be reminded of what utility they may have:

Yes, the record of success for FROSLASS is well established by now. She’s obviously very worth the grind for a top-notch (female) Snorunt. Ditto for ALOLAN NINETALES (evolved from Alolan Vulpix, of course)… it is well within the established meta in Great and especially Ultra Leagues, running either Powder Snow or Charm. No duh on either of those, right?

MAMOSWINE is an obvious must-have too, for Master League… right? Well, look for a good Swinub and grind some XL candy if that’s your thing, sure, but I wouldn’t build a new one just yet. Avalugg has now officially arrived, and I already found it to be likely better in that role moving forward. But on top of that, Master League Walrein is absolutely GOING to be a thing come mid-January, and it pushes Mamo even further down the totem pole and may even rise above Avalugg too. I think Mamoswine’s days as a key PvP piece may be drawing to a rapid close. There are crazier ideas than PILOSWINE in Ultra League, however….

ALOLAN SANDSHREW means ALOLAN SANDSLASH. The unique little Steely Ice has torn it up in several past (and current… looking at you, Holiday Cup) limited metas, and is well worth building if you haven’t already. And if you’re somehow swimming in XL Candy, you might be surprised to see how good it can be in Ultra League as well!

Galarian Darumaka is shiny now. Huzzah! While that’s nice and all, GALARIAN DARMANITAN isn’t the Ice Fang stud you’re looking for. (Check the door marked “Avalugg” instead.) And neither is G-Darumaka in Little League. Saved you the trouble of looking! Grind for the show-off shinies, but there’s nothing to see here for PvP.

I’ve always loved the design and pure funkiness of CRYOGONAL, one of those artifically-super-rare spawns in the game. It comes packing good moves Ice Shard and Night Slash, and above average bulk, but unfortunately that’s where the good news ends. It has that undesirable mono-Ice typing that can be so easily exploited, and no good second charge move options to buoy its performance, stuck with bad moves like Aurora Beam and Water Pulse or way-too-expensive Solar Beam. It does little of note in Great League, but it’s at least somewhat spicy in Ultra League (particularly in Level 40 capped UL) without needing to dip into XL candy, so there’s that.

As for five-star raid target KYUREM, well, it’s not even listed among the core meta Pokémon in Master League on PvPoke, and it’s not hard to see why. A decent, affordable Ice move like the upcoming Icicle Spear, or heck, even boring Ice Beam would do it so much good, but alas, for now Niantic’s only generosity is in releasing the shiny. Thanks for the Christmas socks, Niantic, but where’s that Red Ryder BB gun I’ve been asking for?

The VANILLITE family is… well, let me save you some time by dragging up what I already wrote when they were released last holiday season:

VANILLISH is the middle evolution in the family, and slides nicely into perfect Great League size between Level 37 and 40, depending on IVs. It is a pure Ice type, which is again unfortunate, as Ice resists ONLY opposing Ice damage and is weak to Fighting, Fire, Rock, and Steel. (It is likely the worst defensive typing in the franchise.) That’s strike one.

Strike two is that, despite having Icy Wind, the rest of its moves are a mess. The only fast moves it has are the lackluster Frost Breath (also known as “the Ice move that wishes it was Ice Shard”) and the currently horrid Astonish. (I remain convinced that move WILL get buffed at some point, but until then, it is truly putrid, with only average 3.0 energy per turn and god-awful 1.67 damage per turn 🤢)

And while it has the okay-ish Ice Beam, its only “coverage” move is Bug move Signal Beam, which Niantic would have you believe was “buffed”, but as I wrote back when that happened in September: “Yeah, tacking on a potential debuffing ability to a bad move does not suddenly make it a good move. With or without the debuff, Signal Beam remains a bad move.” And a bad move it remains, with a dull 75 damage for 55 energy. Not to mention, uh, which of those things Vanillish is weak to does a Bug move help against?

It deals neutral to Rock and is resisted by Fighting, Fire, AND Steel, so I fail to see the appeal here. And yes, the sims seem to agree that Vanillish isn’t going much of anywhere. It’s not awful, but it really handles only Grasses, Flyers, and a couple others like Whiscash, Diggersby, and Stunfisk, and at least Signal Beam DOES bring in a nice win against Bug-weak Umbreon. But you can do better, I think.

Is VANILLUXE able to do better? Ew, no, at least not in Great League. Same lousy fast moves, same bad typing, but now less bulk AND no Icy Wind. Yeah, it doesn’t matter if you roll with Blizzard or Flash Cannon, as Signal Beam is now the closest thing you have to a “bait” move, and that’s a baaaaaaaaaad place to be. Stay away in Great League. And sadly, it is really bad in Ultra League too.

If it had Icy Wind it could at least do something, but alas, it does not, and Vanillish with its Wind gets nowhere near 2500 CP even when maxed and best buddied to Level 51. I think it is safe to say that, while Vanillish MAY have very niche use in Great League, there is no future at all for VANILLUXE in PvP unless it sees a major move shakeup, and probably not even then. Get it for the ‘dex entry only and save any good PvP IV Vanillites for potential Vanillish, though even that is a very low priority.

Got all that? Good, then let’s wrap this up!

That’s it for now. Until next time, you can always find me on Twitter with regular PvP analysis nuggets, or on Patreon.

Continued thanks to my PvP friends, local and around the world, who have lent their own ideas and suggestions over the last three years of PvP play and nearly 300 articles of PvP analysis, and helped teach me to be a better player and student of the game.

And thank you for reading… I appreciate your attention and encouragement throughout this year. Happy Holidays and a very Merry Christmas to you and yours. I’ll be back with those longer analyses on Walrein and Sinnoh Cup next week, and then it’ll be article #300 to bring in the new year! 🎉 Stay safe out there, Pokéfriends, and catch you next time!