A (Speculative) Peek at Rollout in PvP

(with apologies to Ludacris 😝)

Niantic’s new favorite pastime seems to be revealing half of the equation when announcing new moves: either the cost or the damage, but not both. I think this is their form of trying to hype things up? Whatever it is, it drives analysts like me ca-razy. There’s a growing rumor floating around that they intentionally do this to see what a certain PvP writer has to say about it and only then decide the final stats… and it’s happened enough times now that I’m almost starting to believe it. So much so that I think it’s time to ignore my normal “no speculation” rule and take a look at what is most likely to be the final stats of new fast move ROLLOUT.

ANYway, putting everything together, and it seems likely that for 4 damage and 2 turns to be true, we’re talking about a clone of the move Spark, which would make Rollout look like this:

Again, keep in mind this is all purely speculative. But it would make sense. Most fast moves usually end up at or very close to a total of 6 if you add the DPT and EPT together. Moves like Lick and Water Gun have 3.0 DPT and 3.0 EPT, moves like Wing Attack have 2.5 DPT and 3.5 EPT, moves like Mud Shot and Thunder Shock and Poison Sting have only 1.5 DPT but a whopping 4.5 EPT, etc…. all adding up to 6.

As I said earlier, there already exists a move that deals 4 (on paper) damage, generates a goodly amount of energy, and lasts only 2 turns: Electric fast move Spark, best known for its use on Magnezone, Lanturn, and sometimes Probopass and Luxray. Most things that have another Electric fast move available will prefer that other move, but there’s nothing inherently wrong with Spark.

So if Niantic decides to keep things good without being crazy (AKA the next Walrein), Rollout could match Spark exactly and check all the boxes. PvPoke agrees and actually added Rollout with Spark-like stats as a “speculative” move, as he did in the past for Psychic Fangs and Icicle Spear before they were officially revealed by Niantic.

So making that assumption (and blatantly ignoring phrases about “the first three letters of assume” and my own self-imposed “don’t speculate!” rule), I wanted to briefly look at what such a move would mean for Alolan Golem… and a bit beyond.

The only Pokémon we know for sure is getting the new move, so this will be the bulk of the analysis.

Alolan Golem already has a couple of decent fast moves. Rock Throw (4.0 DPT, 2.5 EPT, 1.0 CD) is its current Rock-type fast move, and while inferior to Smack Down (which deals the same damage but generates 0.17 more EPT), it’s still a fine move in its own right, applying much more fast move pressure at the expense of getting to less charge moves. But Volt Switch (3.0 DPT, 4.0 EPT, 2.0 CD) is usually preferred, and on paper it’s strictly better than the presumed Rollout, with the same energy gains but 50% more damage.

But there are two things going for Rollout in comparison: it’s only a 2 turn (1.0 CD) move, so it’s far less clumsy to use; anyone that’s used Galvantula or Ampharos or anything else relying on Volt Switch has surely suffered some agonizingly close losses where the opponent snuck in that critical last bit of damage while Volt Switch’s long animation was still finishing.

Rollout, if it is indeed a 2 turn move, wouldn’t really have that problem. The other advantage Rollout will sometimes have is being a Rock move as opposed to Electric like Volt Switch. You will see pretty clearly laid out in the results below how that makes a difference (good and bad).

And with that, let’s get to those numbers! Keep in mind that, since I will be doing a deeper dive on this once the move stats are definitively known, for now I’m just going to stick mostly with standard 1v1 shielding scenarios. No sense going much deeper than that until we’re sure of Niantic’s plans.

Gonna try to keep this really simple. Not even going to link directly to sims (partly because there’s no guarantee it remains as currently coded on PvPoke and links could break at some point… another reason I usually don’t do a lot of speculation! 😝), but instead just SHOW you the differences in picture form. Some may prefer it that way anyway!

So, here is Volt Switch vs Rollout in 1v1 shielding in Open GL. And the main differences are thus: 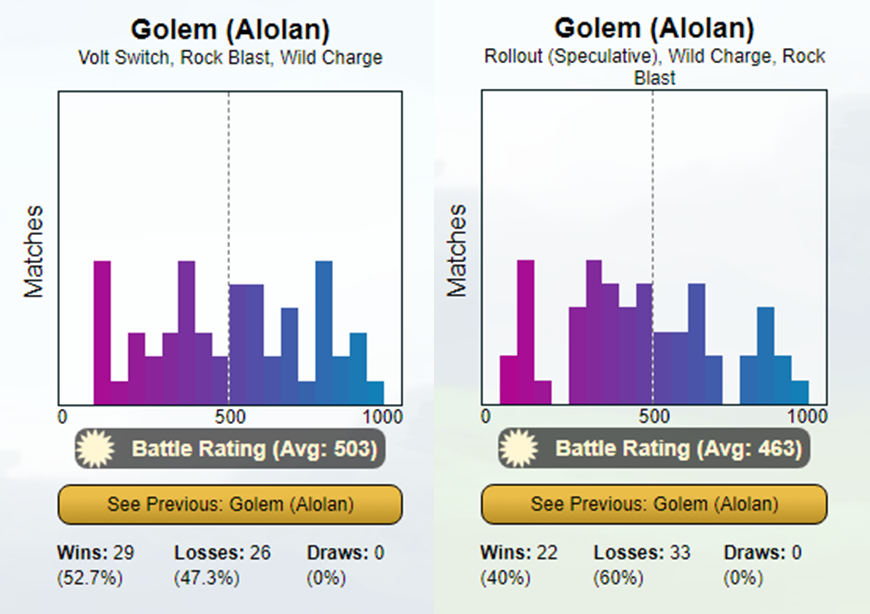 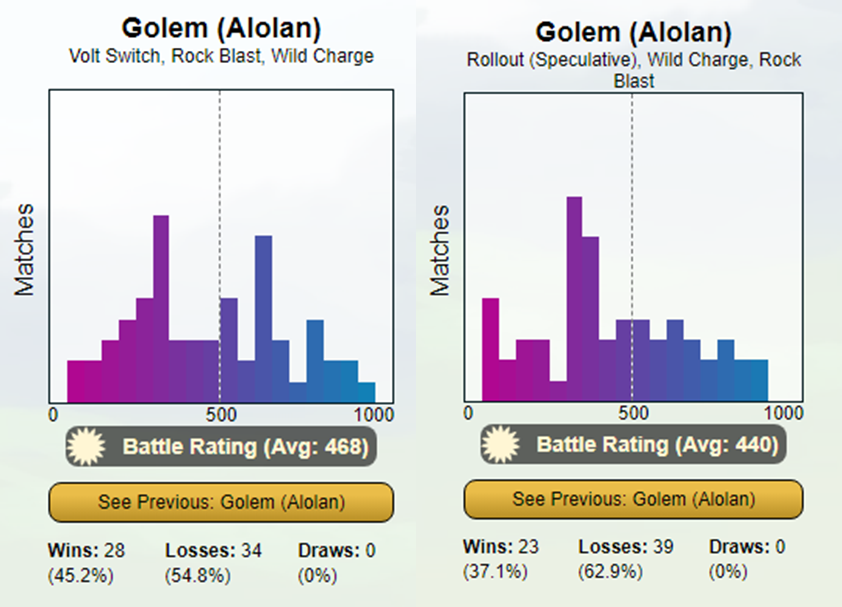 In other words, Rollout is viable and has some cases where it may be preferred on Alolan Golem… but generally I think Volt Switch will remain the standard. Again, this is based on a speculated (though very likely) move… should Niantic decide to break the mould and pump up the energy gains to something like 4.33 or even 4.5 or higher, all bets are off. (And the possibility of that is why I’m taking just a quick look now and will take a loooooong look once we have the final stats.) But short of that, this will be okay for A-Golem, just not all that great. Probably will be better saved for limited metas that favor Rock damage over Electric.

…and my other homies

But the HOPE is that, unlike Psychic Fangs and Icicle Spear and Razor Shell and other new moves introduced during recent Community Days, Rollout might be… well, rolled out further than just Alolan Golem. There a number of notable Pokemon that get Rollout in MSG, and some of them could really use the help. Let’s breeze through a few of them and see what they might look like with such a move: 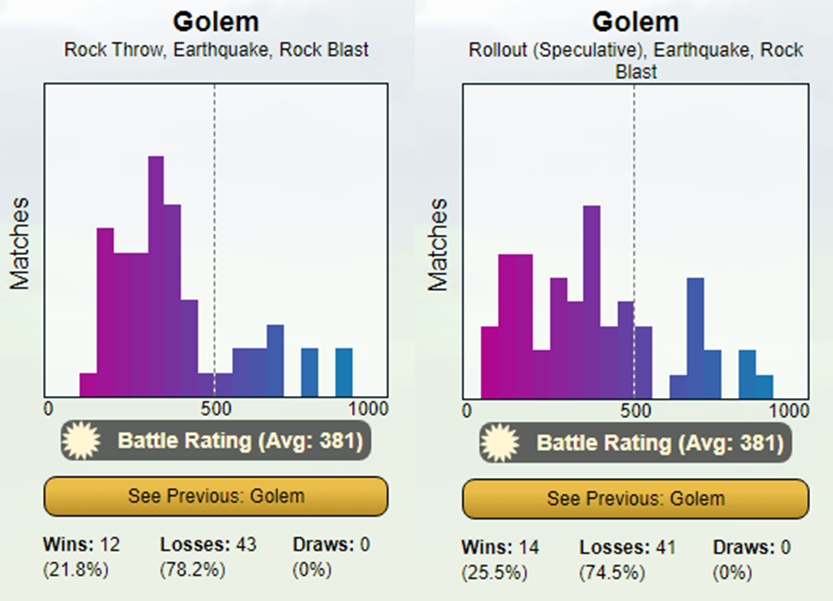 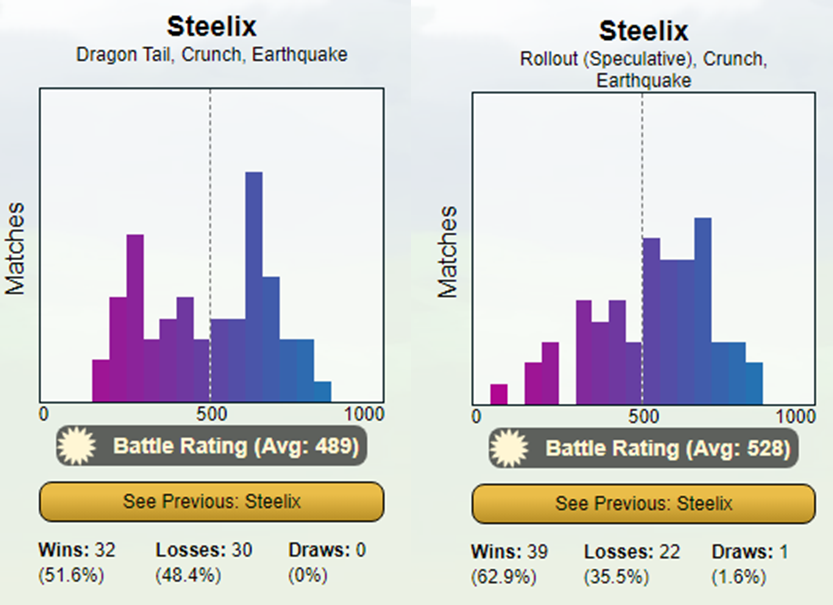 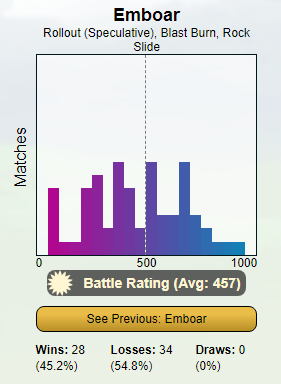 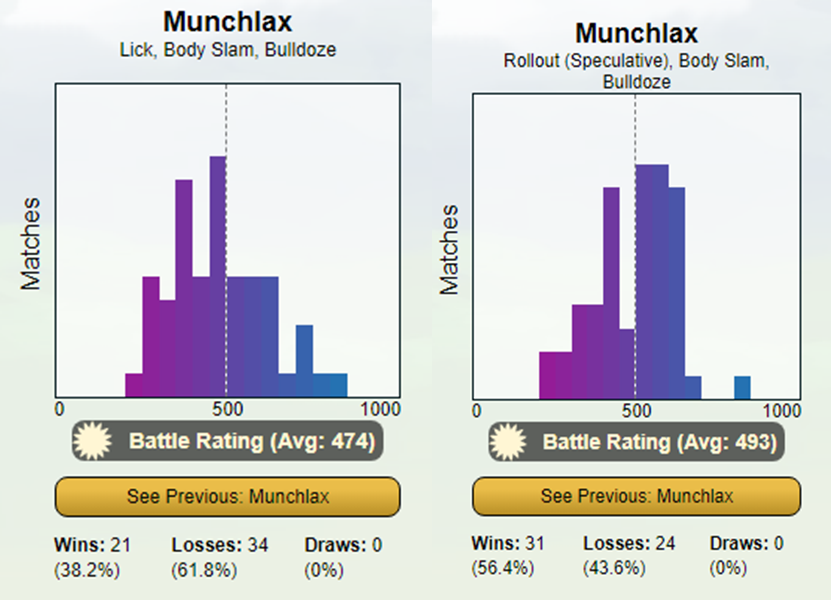 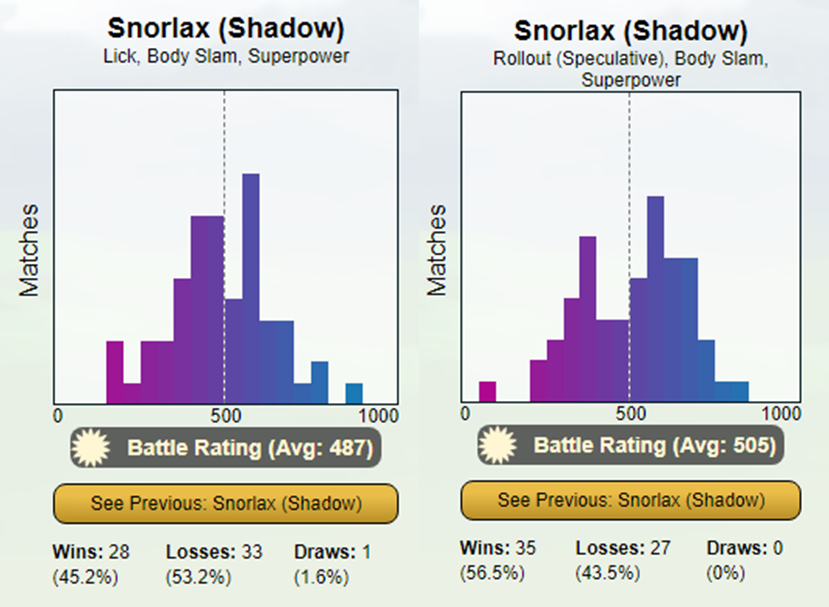 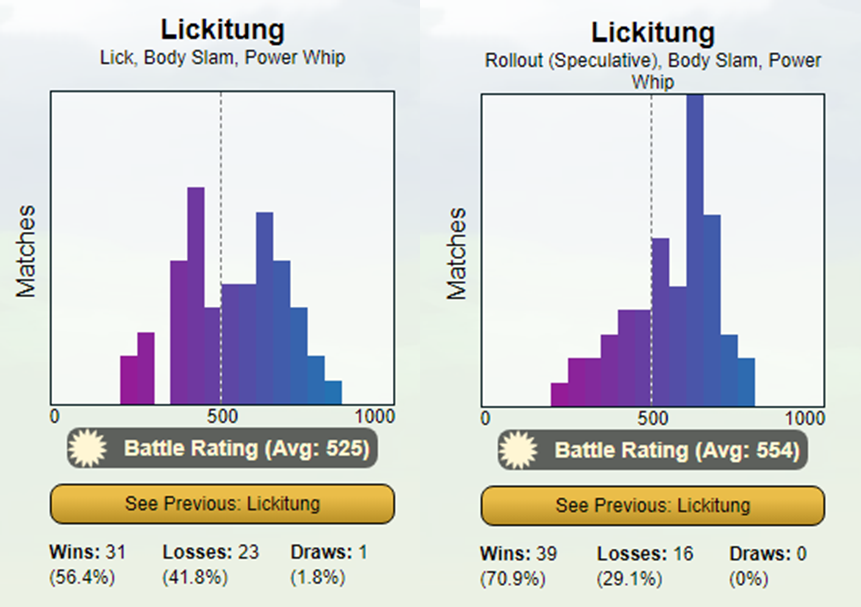 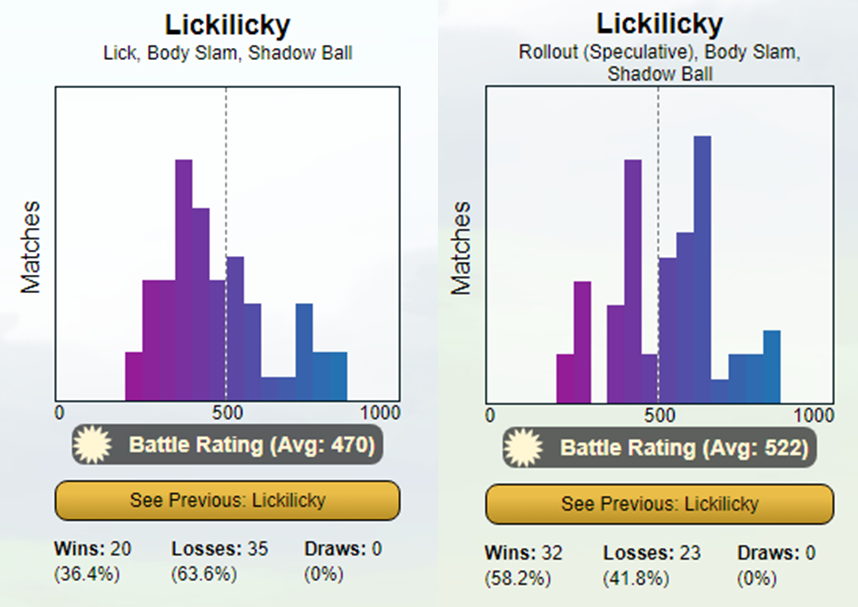 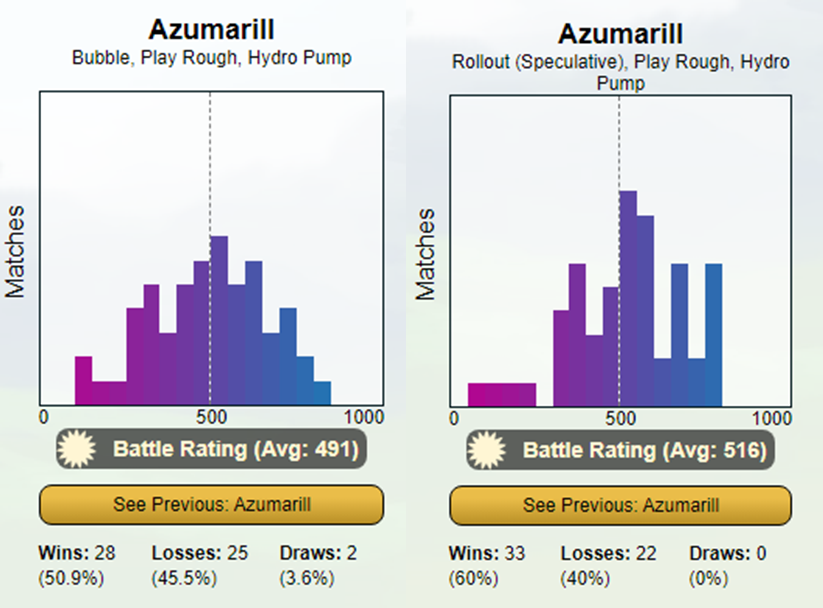 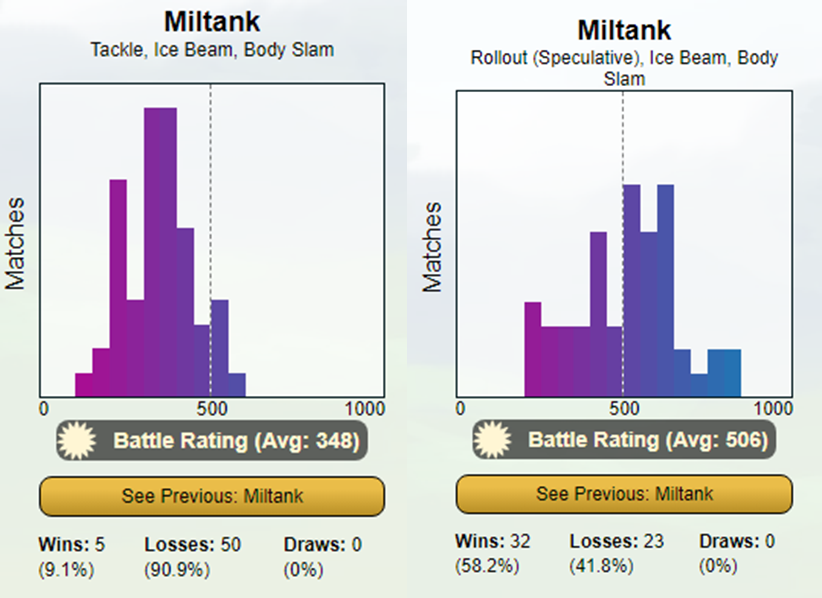 Alright, that’s far enough down the daydreaming rabbit hole. This was a fun little exercise on what we MIGHT see after May’s Community Day, and probably the low bar for what to expect for Alolan Golem. Niantic, if you’re reading this like many thing you are, a bump to 4.33 EPT or something wouldn’t be unappreciated. 😇 But at least consider giving this to the long-suffering moo cow, eh? Poor Bessie deserves this!

Until next time (and the eventual full-fledged analysis on A-Golem), you can find me on Twitter for regular PvP analysis nuggets, or Patreon. And as always, please feel free to comment here with your own thoughts or questions and I’ll try to get back to you!

Thanks again for reading, Pokéfriends, and catch you next time!