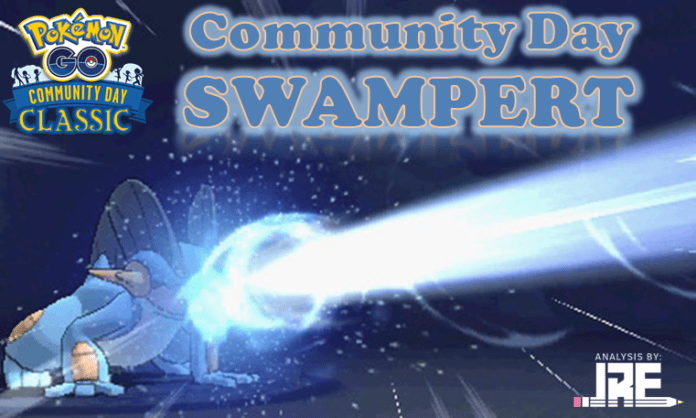 Our last Community Day Classic happened back in January, bringing back Venusaur and its awesome Frenzy Plant. While Frenzy Plant Venusaur was hardly new to PvP at the time, I still decided to dive into it for new and old… er, I mean, veteran players alike. Because while everyone knows Venusaur is a PvP staple, it was still worth it to check Shadow differences and break down WHAT makes it as good as it is.

So in this article, we’re doing the same thing, but MORE. I’ll take a look at Swampert in all four current GBL Leagues, and compare two viable closing move options, Shadow vs non-Shadow, and some different IV combinations throughout. I am going to try not to kill you with a wall of text (I hit it especially hard in Great League to set the stage but then take my foot off the brake a little bit after that), but I think this is sufficient to give you pointers on what to grind for this weekend, and how many special Swamperts you may want to make sure you walk away with.

But for those who don’t want ANY wall of text, let’s put our TLDR right here upfront with our Bottom Line Up Front:

Now for details on that summary, read on!

So, this is a good opportunity to talk about the infamous “Mud Boys” and what makes them so special.

Ground types come with vulnerabilities to Ice, Water, and Grass, and resistances to Poison, Rock, and Electric, that last one being a double resistance.

And just lining those up, you can probably see where this is going. Water negates the Ground weaknesses to Ice and Water, and Ground turns Water’s vulnerability to Electric all the way into a resistance. And the result is what makes the Mud Boys special: they have but one weakness, albeit a critical double vulnerability to Grass. But they also carry five resistances (Electric, Fire, Poison, Rock, and Steel) and nothing other than Grass deals any better than neutral damage.

And that’s a good thing because Swampert is the glassiest of the Mud Boys. It’s not what you would consider a truly frail Pokemon (it has bulk that is relatively comparable to Venusaur, Sableye, Froslass, Pelipper and others), but it’s far from tanky.

Believe it or not, there HAVE been a couple of limited metas where I legit recommended giving Water Gun a try… usually the ones dominated by Flying types that double resist Ground damage but take neutral (or greater) from Water damage. But yes, 95% of the time, just stick with high-energy Mud Shot and don’t think twice about it. Nothing you didn’t already know about Swampert (and the three core Mud Boys) already, so moving on to the charge moves…

So we can also keep this pretty simple. Yes, you absolutely, 100%, want Hydro Cannon. You CAN skirt by with Surf if you absolutely have to, as it’s not a bad move itself, but why would you when we all get a shot at evolving (again) with Cannon and its 15 extra damage instead?

Similarly, there’s no reason to run Muddy Water, which is a pretty weaksauce move that should really only ever be considered where there’s no better “bait” option. Considering that Hydro Cannon (and Surf) costs only 5 more energy for over TWICE as much damage, there just isn’t a place for Muddy.

Rather, you want that second move slot occupied by one of Swampert’s big closing moves: higher damage plus STAB Earthquake, or awesome coverage move Sludge Wave, both of which cost 65 energy. Obviously the former is better for pure damage and hitting the things you WANT to be deploying Swampert against hard. (And it’s resisted only by Grasses, Bugs, and Flyers.) But Sludge Wave is a direct answer to the Grasses that terrify Mud Boys, hitting them and Fairies super effectively, though Poison moves like Wave are resisted by a ton of things — Ground, Ghost, Rock, Steel, and Poison — ironically the last three of which take super effective damage from Earthquake (and none of which resist Earthquake OR Hydro Cannon).

But you know me… I’m all about the numbers. What do THEY say about the comparison between Earthquake and Sludge Wave? Glad you asked (even though you didn’t 🙃)…

Let me start by saying that you’ll find there are solid cases for BOTH closing moves in all Leagues, and Great League is no different. I’ll start by pointing out that Earthquake is generally more impactful than Sludge Wave, but that’s not the entire story. Quake, owing to its higher damage output, can wipe out Lapras, Froslass, Politoed, and Sableye and has a big leg up on enemy Sludge Wave Swamperts. But what Wave does is exploit that super effectiveness versus Fairies to slam the door on Charmers (beating Wigglytuff specifically) as well as more consistently beating Azumarill. (Technically, Earthquake can beat Azu as well, but basically requires the Azu player to hand it to them… a savvy Azu will still win, while Wave closes that same path to victory by dealing about 20 more damage than Earthquake.) Sludge Wave also shows off that super effectiveness versus Grass types by additionally beating Abomasnow.

ALSO interesting is that with something close to #1 IVs (0-14-14 is tops), Swampert with Earthquake actually slides back a bit. Its Attack is likely to drop below that of Froslass, so it loses CMP and Lass usually strikes the killing blow first. It also now usually suffers a painfully close loss to Alolan Ninetales, with Charm or Powder Snow, due to lacking enough juice for Earthquake to finish A-Tails off. (Whereas a Swampert with a little extra Attack gets the job done.) Sludge Wave #1 IV Swampert, however, retains the same record as before, keeping all the same wins (like Azu, Wiggly, and Aboma, as well as A-Tails) that it had before. Something to perhaps keep in mind as you’re evolving… #1 in rank does NOT always mean #1 in performance.

Some other items of interest for Great League:

I’ll spare you a long and winding breakdown of Earthquake versus Sludge Wave at this level. Here’s the gist of it, comparing the two in 1v1 shielding: Earthquake is clearly a better option than Sludge Wave. In Ultra Premier Classic, Quake beats everything Wave can and adds Empoleon, Escavalier, Lapras, Shadow Machamp, and potentially Roserade on top of it. (Remember that versus a Grass/Poison like Rose, Earthquake and Sludge Wave BOTH deal neutral damage, and costing the same amount of energy, Earthquake has the clear edge).

And the gap is even wider in Open Ultra League, where Earthquake beats Cofagrigus, Empoleon, Escavalier, Altered Giratina (with Shadow Claw), Jellicent, Lapras, and Shadow Machamp AND matches all of Sludge Wave‘s wins yet again. Heck, even Return does everything Sludge Wave can.

That trend continues with Shadow Swampert. It is worth noting that Sludge Wave Shadow IS significantly better (at least on paper) than [Sludge Wave non-Shadow(https://pvpoke.com/battle/multi/2500/custom/swampert/11/0-2-5/2-1/ultra), now having the extra punch necessary to take out things like Abomasnow, Amored Metwo, Obstagoon, Sirfetch’d, Skarmory, Togekiss, and Umbreon. But… Shadow with Earthquake is still overall better, beating some familiar names (Empoleon, Escavalier, Jellicent, Lapras, Machamp, and Politoed) and losing a few others that remain unique to Sludge Wave (Abomasnow, Powder Snow A-Ninetales, and Togekiss). But it’s ALSO an overall improvement over non-Shadow Swampert with Earthquake, losing Cofagrigus, Drifblim, PS A-Tails, and A-Giratina, but gaining Armored Mewtwo, Obstagoon, Shadow Politoed, Sirfetch’d, Skarmory, and Umbreon.

And one final wrinkle, as #1 IV Swampert is sort of the best of both worlds, beating everything non-idealized Earthquake Swampert can, PLUS Armored Mewtwo as Shadow Swampert can, and all-new win potential over Politoed and the big one: Defense Deoxys. (Potentially even #1 IV DDeoxys which baits perfectly and properly saves a couple Psycho Boosts for the end of battle.)

Good luck deciding which Swampert to run in Ultra. So many good options!

One of the more amazing things about Swampert is that is relevant in Great League AND all the way up to Master League.

And you guessed it! Earthquake is generally still better. in Master League Premier Classic, Quake again does everything important that Sludge Wave can and adds on to it, with new wins versus Walrein, Milotic, Shadow Machamp, and Shadow Snorlax. [Shadow Swampert](), by the way, loses all four of those, but instead outraces Haxorus and Conkeldurr… overall I call that a downgrade.

Bring in the Legendaries and Mythicals in Open Master League, and it’s again Earthquake that shines over Sludge Wave. Wave DOES manage to now take out Togekiss, but the impacts of Quake cannot be overstated: beating Dialga with any combination of its charge moves, as well as outracing Garchomp (provided it does not pull off — or does not even have — Sand Tomb baits), and Zekrom. Again, 10 points to  Earthquake. Shadow Swampert is a slight step backwards at this level, now unable to live long enough to take out Garchomp, Togekiss, Groudon, or Mamoswine no matter which closing move it’s using. While Shadow Swampy does gain Walrein and Zamazenta as compensation, that seems an imbalanced tradeoff, no?

And before somebody asks… no, I am not looking at Mega Swampert today. In large part this is because PvPoke does not currently support as-yet-unreleased Megas (so can’t simulate it easily), and partly because it’s hard to simulate in an environment with OTHER opposing Megas (right now it would be simulating one Mega against a field of opponents with no other Megas in it… not a fair comparison), but also because I’ve hopefully already made it clear that it is well worth powering up a “hundo”, 15-15-15 Swampert for PvP anyway, so if you do that you’ll already have your good Mega candidate anyway. IF Meags become PvP-eligible later this season (as has been teased), I can do a fair comparison between existing Megas when and if we cross that bridge.

But we’re still not QUITE done. One more area to look at before we wrap this one up…

Yep, ALL the way from Master down to the sub-500 CP arena. And yes, Swampert works there as well! While not eligible in next week’s  Little Cup (evolved Pokemon are banned), Swampert was actually quite popular in Element Cup (and likely will be again later this season). It’s worth building if you find a decent, Level 6 or so Mudkip this weekend. Note that even a 0-0-0 Swampert is too big for Little League above Level 6.5, so Shadow Swampert (which is, at minimum, Level 8) will never fit, which is too bad as it would (again, strictly in theory) represent a slight upgrade.

One more final, final thing before we wrap it up: while I am a PvP analyst and only dabble in PvE analysis — it’s best left to the real experts! — it’s worth a mention that Swampert (particularly Shadow and Mega) project as excellent PvE weapons as well. Shadow Swampert is a Top 5 Water attacker, and Mega Swampert projects as potentially the Number 1 Water raider once it is eventually released. All the more reason to grind for that hundo!

Alright, that’s all I got for today. Even I’m tired after all that! 😮‍💨 While I will admit I could have been even MORE comprehensive, I think this is more than enough to hopefully give you an understanding of what leagues to grind for Swampert, with what moves, and where and how to use your Shadows as well. Good luck, and good hunting!

Thanks for your faithful readership, folks. Stay safe out there, and catch you next time, Pokéfriends!