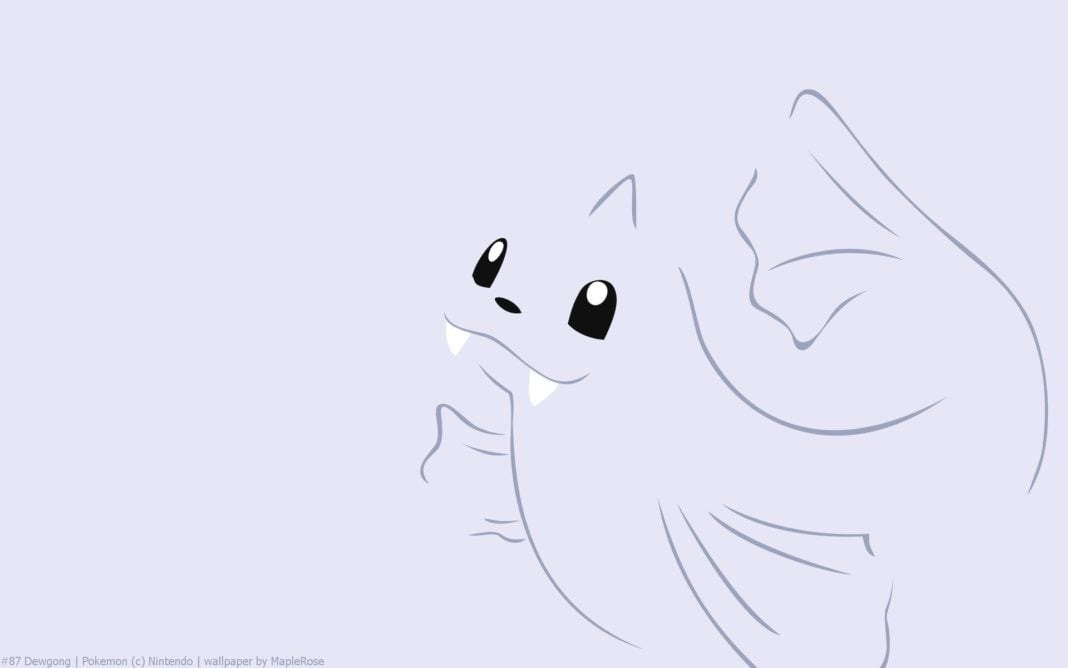 It’s amazing what a few move tweaks can do for a Pokémon. Dewgong has long lived in the shadow of Lapras in virtually anything that its tried to do in Pokémon GO. About the only thing Dewgong was somewhat useful for was being good with the old, old Gym prestige system, but that was way back in 2017! Since then, Dewgong has just floated around in the shadow of Lapras as more and more Ice types were introduced to the game.

However, the December 2019 combat update brought about it updates to old moves and introduced new moves to both old and new Pokémon alike. While Dewgong did not gain any new moves, it is by far the greatest beneficiary of the Icy Wind rebalance and is finally able to swim out of Lapras’s shadow and even overshadow it!

Before this update, Dewgong was barely thought of as a top 100 option in open Great League formats and was never even considered in Silph Arena formats since it shares the exact same typing and original Generation with Lapras, meaning it would never be able to stand out unless Lapras was banned from a Silph Arena tournament.

In a surprising twist of fate, not only did Dewgong become a borderline top 20 pick in open Great League formats, but it even got itself banned in the Fusion Cup, the Silph Arena’s January 2020 competitive format.

With all of these positives, there is one very massive downside that we need to address before diving deeper into this sea lion. The Icy Wind update was fantastic for Dewgong and it is now an amazing pick in the open Great League. However, that doesn’t mean it will be easy to obtain. To be this good, Dewgong is reliant on a double legacy moveset, and Icy Wind is one of the legacy moves it needs.

Yeah, the move that has taken Dewgong from zero to hero isn’t even readily obtainable in the game currently. To make matters worse, Dewgong wasn’t a very relevant Pokémon which means that it will be challenging to even find players in your local community that happen to have its double legacy moveset.

With GO Battle League on the horizon at the time of this writing, we can only hope that Niantic continues to bring back legacy moves as they did in the December 2019 combat update for the likes of Machamp, Dragonite, and Snorlax, and include Dewgong in the next wave. So with the bad out of the way, let’s take a look at just what makes Dewgong such a strong pick in the Great League and what its best and worst matchups are.

Dewgong has an ideal stat spread for PvP with Attack as its lowest stat. Compared to Lapras, Dewgong has slightly higher base Defense and its lower Attack stat means Dewgong can stretch this gap compared with Lapras, but the large base HP difference makes the two close to even in terms of Great League stat product with Dewgong having a slight edge. Considering how common Lapras has been in Silph Arena formats and even open Great League, this is a big positive for Dewgong as it is able to hang with the best of them in neutral matchups.

Below are the moves Dewgong has available to it in Pokémon GO. Legacy moves will be denoted with a “*”. Remember that you can’t use TMs to gain access to legacy moves.

Of all Dewgong’s moves, Iron Tail, Aurora Beam, and Aqua Jet should automatically be eliminated as the former two are just bad PvP moves in general while Aqua Jet is not compatible with Icy Wind.

Ice Shard and icy Wind are by far Dewgong’s best moves and should be used on all sets, but keep in mind that both are legacy moves. As Dewgong should have Icy Wind in its moveset, Water Pulse is the natural pick for the second move for coverage on Fire types as well as neutral coverage on Steel and Ice types that lack a secondary typing that resists Water.

Frost Breath and Blizzard aren’t outright bad per se, and Blizzard is even a great closing move, but Dewgong’s other Ice type moves (not Aurora Beam) are generally more useful.

Within the open Great League in a “fresh” (no energy or HP advantage for either side) 1v1 shield scenario, Dewgong has an astounding 77.7% win rate. This includes some key matchups against Altaria, Skarmory, Zweilous, and Tropius, all of which are top 15 picks in open Great League formats. While these are some great wins, Dewgong also has some tough losses against some common threats. Lucario, Blaziken, Escavalier, and Bastiodon are among the hardest Pokemon for Dewgong to go up against. Just looking at these key matchups helps us to identify the key issues that hold Dewgong back from being a real top 10 threat in open Great League.

With a linear moveset, Dewgong doesn’t have a way to ward off Counter users, which are very common in the open Great League. Furthermore, Rock types that have a secondary typing to resist Ice type damage do a real number on Dewgong. This is highlighted by Bastiodon, but even exploited by the lesser seen Omastar and Carracosta. Water types won’t immediately beat Dewgong, but as it has no way to hit them for effective damage, it makes Dewgong extremely reliant on the Attack drops from Icy Wind to let its natural bulk overcome them. Sealeo and Lapras are the worst offenders as they even double resist Ice type moves and can fight back potentially with Normal type moves for neutral damage. Steel types that lack a secondary typing to make them neutral to Ice also can generally fare well, particularly if that secondary type is super effective against Dewgong. Magneton, Probopass, and the Thunder Shock-wielding Melmetal are all prime examples of such Pokémon.

On the positive end of the spectrum, Dewgong is one of very few Pokémon that can claim to beat the common Flying types while not completely folding to Azumarill. This is highly desirable as the likes of Altaria and Skarmory are typically accompanied by Azumarill for its ability to wall and / or beat their counters. While Dewgong won’t be shredding Azumarill any time soon, the Icy Wind Attack drops will keep Play Rough from breaking through Dewgong. Should the Azumarill be packing Ice Beam over Play Rough to surprise Grass types, Dewgong will proceed to laugh at its attempts to push damage onto it… albeit very slowly.

Dewgong’s high natural bulk in combination with Icy Wind also makes it great in almost any neutral matchup where both sides are simply relying on neutral damage to win due to no advantage or disadvantage based on types. Because of this, Dewgong makes for a deceptively good lead as many of its losing matchups aside from Counter users tend to be playable, which means you’re rarely forced to make the first switch.

Alolan Marowak is perhaps the best partner for a Dewgong. It shrugs off Counter damage, roasts Steel types, and has Bone Club to threaten Bastiodon and Probopass with heavy damage. It appreciates Dewgong’s ability to force shields in drawn-out battles due to icy Wind’s Attack drops to make landing Shadow Ball in the late game much easier. Ironically, a Counter user of your own is a great option as they have great synergy with Dewgong.

With Dewgong destroying Altaria, beating Skarmory, and going toe-to-toe with Azumarill, a Fighting type like Hitmontop, Machamp, or Lucario can be put in prime position to finish off an opposing team with some of their most common counters neutralized. In turn, the Fighting types happily switch into Steel types, Lapras, and Sealeo coming in to stop Dewgong.

As Dewgong has very high natural bulk and lacks a double weakness (unlike Altaria and Bastiodon) it is able to soak a lot of attacks, even some super effective ones when necessary. This makes fragile options, such as Lucario, Haunter, and Blaziken good picks as you can more aggressively use shields to protect them with Dewgong in the back to stomach at least one charge move from most opponents.

While Dewgong was eligible in multiple Season 1 Cups, it wasn’t until the Icy Wind buff during the Timeless Cup that it really hit the scene. Within the Timeless Cup, Dewgong was an extremely powerful pick that was capable of lowering the potency of arguably the most threatening strategy in the Cup, Double Dragon thanks to Icy Wind Attack drops taking some of the bite out of Dragon Breath. It faced stiff competition from Lapras and Sealeo, both of which were hard counters to it, but Dewgong was still able to become a top 10 pick within the format as it punished teams reliant on fast move damage to get the job done.

On top of Lapras and Sealeo, Dewgong also had to look out for Blaziken, arguably the most underrated starter pick in the format, which could beat Dewgong with Counter alone and save its energy for later by switching out on the next Pokémon to restore its Attack stat.

Taking care of Dragon types was huge, but Dewgong also took care of Venusaur and Meganium, the best Grass type starters as well as two of the highest used starters in the format. Unfortunately, Dewgong didn’t see much real usage though due to the rarity of its legacy moveset, which was required for it to perform at this high level.

The Fusion Cup seems like a perfect format for Dewgong to show off its capabilities. It’s a format that only allows dual types and even locks away Lapras because of the extra stipulation of making eligible Pokémon have their 2nd move unlock cost no more than 50k stardust (Lapras’s 2nd move costs 75k) Even its absolute worst matchup in open Great League, Lucario, wouldn’t be present as Pokémon with lower stardust costs as a pre-evolution aren’t exempt from this rule. However, perhaps the Silph Arena saw what a problem it would be for a rare, double legacy moveset Pokémon to be a defining part of the meta as they included Dewgong in its species bans alongside Medicham and Azumarill, two of the most potent Great League Pokémon.

Dewgong has gone from zero to hero and is one of the most polarizing Pokémon in the Great League. It’s a fantastic option, but requires the dreaded double legacy moveset for it to be so fantastic. Thankfully for Dewgong, hope is not lost for this moveset to become available again. The December 2019 combat update showed that Niantic isn’t afraid to bring back some legacy moves and we can only hope that Dewgong receives the same treatment as Dragonite, Machamp, Exeggutor, and others in the future. Because of this, it is recommended to save any high PvP IV Seel you obtain so that you are prepared should that time come.