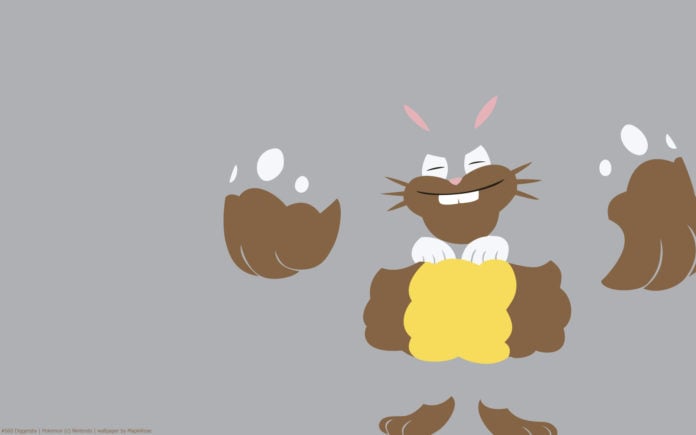 Hey Trainers, Generation 6 is finally here and has already shaken up the PvP meta and will likely continue to do so as more Gen 6 Pokémon are released. Also, with the introduction of Level 50, we have a new category of Pokémon in PvP shown with an added “XL” at the end to indicate its level requires the use of XL Candy.

Diggersby is one of these Pokémon that fall in the XL category and there will be more on that below. That being said, Diggersby has hit the great league scene with a vengeance.

It’s stats and move set have given it the #13 spot in top great league Pokémon according to PvPoke.com ratings. Let’s dive deep into what makes this Pokémon so good and how to use it this season.

The Digging Pokémon with a lower attack stat and high defensive stats, making Diggersby ideal for the great league. This is one tanky ground bunny.

As you can see, Diggersby has access to some very good moves, with Mud Shot to charge up it’s hard hitting options. Fire Punch offers great coverage for those pesky Grass and Ice types. In most cases, the best move set is Mud Shot, Earthquake, and Fire Punch. Hyper Beam is also a very good closer option as Mud Shot will charge it relatively quickly and it gets STAB bonus from Diggerby’s Normal secondary typing.

Diggersby maxes out just over 1500 CP at Level 40, which means you will want very high IVs. The best spread will be 14 attack, 15 defense, and 15 stamina. A perfect IV Diggersby will also yield you a top 3 IV spread,  so you look out for these IV spreads. This will be the easiest way to get a Diggersby that is currently viably in the current meta at level 40.

However, with level 50 now introduced, there are other IV spreads that are better for the intention of producing a Diggersby XL.

The best IV spread for Diggersby XL is going to be 0 attack, 15 defense, and 13 Stamina, significantly different from the best spread for level 40. This will increase your health points and defense points, making you harder to take down in battle. It will be extremely costly and time consuming to get a maxed Diggersby XL, so our advice is to find a high IV spread for level 40 now and keep a lookout for level 50 ideal IV spreads to save for much later.

Your best bet to find the best IV spreads is to take advantage of the current Kalos celebration event. Find as many Bunnelby as you can and accumulate as much candy and XL candy you can, while on the lookout for ideal IV spreads for both level 40 and 50. It is completely up to you if you want to invest in both, as either will be viable in great league when maxed.

This Pokémon is like the Bidoof of the Kalos generation, so we do not anticipate any special events or movesets for this Pokémon in the near future. Go out there and catch while you can, but Bunnelby may end up being fairly common in the future as well.

The ideal IV spread will reach its 1500 CP limit at max level, which is very expensive in terms of dust and candy. Luckily, unlocking the second charge move is a cheap 10k dust.

Our recommendation is to use a lucky trade for a good level 40 maxed Diggersby for reduced stardust and candy cost. It will be a great addition to your great league teams until XL Pokémon become more common.

Diggersby in the Great League meta

Diggersby has some amazing key wins against very common great league contenders and has a win rate of 75% against all availabe Pokémon! Its key wins are against Galarian Stunfish, Skarmory, Bastiodon, Alolan Marowak, Registeel and Galvantula. Pretty much any Poison type is going to lose as well as Fire, Steel, and Rock types. In all of these key matchups, it wins by significant margins, which is amazing against Galarian Stunfisk.

With all the good match ups, there are also the difficult ones. You will run into problems from mostly Flying, Grass, and Water types. Your Fire Punch offers some support in terms of grass types, but the match ups will be difficult regardless. Ice types will also be an issue potentially, but there are not as many of those in the meta to worry about. Hopefully you can Fire Punch their face.

Although minor, there could be an argument to run Quick Attack. It is a decent fast move, but does not have the charging capability as Mud Shot does. However, if you are worried about flying types or want to do more neutral damage, then it could be viable with the right team. Most people will use Mud Shot, but it is worth noting that Quick Attack is not terrible.

Though its normal typing does not synergize well with its ground typing, it does offer useful resistance to ghost type attacks which can be common in great league. Whether or not this added ghost resistance is worth the fighting type vulnerability is up for debate, but if you decide to surprise someone with Hyper beam, that STAB damage will hurt.

In short, Diggersby is an amazing addition to the great league meta and provides a really good option for countering Pokémon that are historically hard to counter (like Galarian Stunfisk). Diggersby is a great overall Pokémon to have, but shines as a lead and attacker Pokémon, meaning its really good against shielded opponents even if you are unshielded. I would be warry of using it as a switch Pokémon because of its weakness to grass and how common Razor Leafers are in the meta. In summary, save up those candies and dust to eventually build that Diggersby XL.

Diggersby is a very tough contender for your great league team, with many strengths and easily covered weaknesses. In a way, its like the ground bunny Azumarill of Kalos, but you will not want your Diggersby to square off with its Johto counterpart.

With ground type attacks, you will want to have flying type support. A strong electric type can cover its flying and water weaknesses. Abomasnow or Galvantula fill this role very well.

Then add a third that synergizes well with your duo. At rank #13 in great league, this will likely be a good pick for the foreseeable future, so do not hesitate to build one if this matches your playstyle.