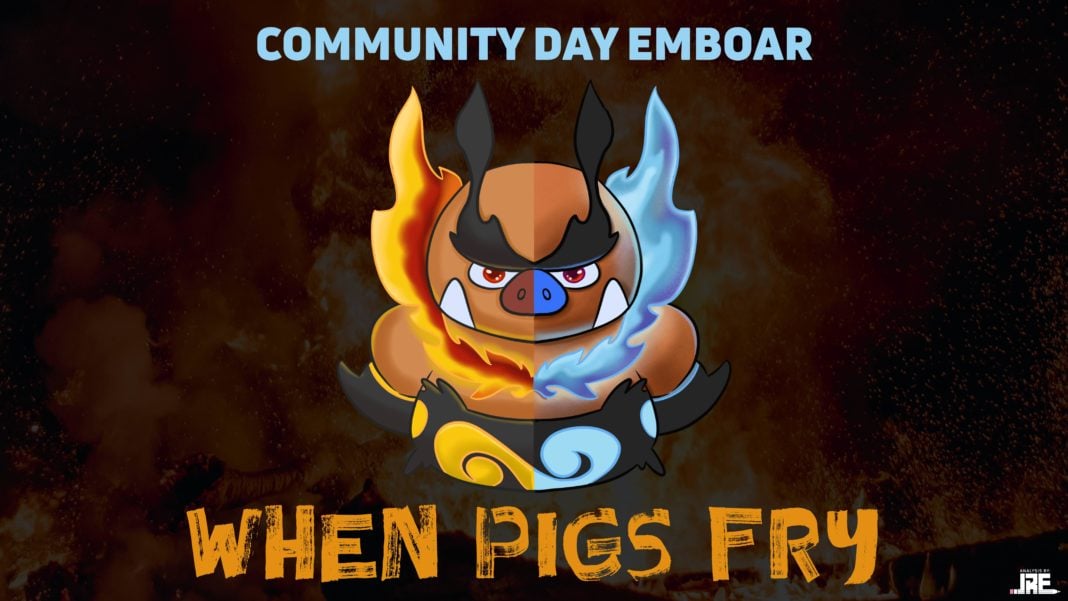 Hello again, fellow travellers and PvPers! As I’ve done many times before (officially starting last April with Abra/Alakazam with Counter), I’m here to take a close look at this month’s Community Day spotlight Pokémon and examine its merits in PvP. This month, that means the second of the Gen5 starters to receive its own special day. After Serperior got a shot in the arm—er, if it had arms, that is—that propelled it into true PvP viability after its Community Day in April, (my first official GO Hub article!) can the addition of Blast Burn to its arsenal do the same for EMBOAR? Let’s find out!

First, as always, let’s break down the Pokémon itself…

Well, The Pokémon Company had quite a love affair with Fire/Fighting types for a while there, didn’t they? The Tepig/Pignite/Emboar family marks the third straight generation of Fire starters that end with a Fire/Fighting Pokémon (before they finally shifted to pairing Fire with something else—Psychic—in Generation 6). At least it’s a rather complementary pairing, with Fire negating the standard Fighting weakness to Fairy damage, and Fighting eliminating Fire’s vulnerability to Rock damage (and bringing along a bonus resistance to Dark damage). The end result is that Fire/Fighting types like Emboar resist Fire, Grass, Ice, Steel, and Dark moves, and double resist Bug. But they are left vulnerable to Psychic and Flying (from the Fighting half) and Water and Ground (from the Fire half), all pretty common types of moves to encounter in PvP these days. Hmmm.

More worrying are the stats. The big deficiency sticks out like a sore thumb even to folks who don’t really pay much attention to stats: only 80 Defense in Great League is glaringly low. And yes, that is somewhat compensated by having above average HP, but to put it in perspective, the only Fire starter with less overall bulk than Emboar is Blaziken. Despite Emboar’s impressive, barrel-chested look, it has trouble taking a punch.

Some worrying figures so far, but let’s see if the moves can salvage it….

Well, that’s… ungood. No Fire Spin, no Counter, so already falling way behind Blaziken. Instead, it has Ember, an above-average move now overall, but one lacking in above-average energy generation. (For reference, Fire Spin is 3.0 DPT/3.33 EPT… that 0.33 difference may seem minor but it’s important, as we’ll see soon.) At least Ember is worlds better than the truly awful Low Kick. 🤢 Seriously, it’s a good thing Fighting types have Counter (or Karate Chop, in rare cases) because Low Kick and Rock Smash (3.0 DPT but only 2.0 EPT) are both just dreadful.

So we basically have no choice but to run with Ember, while all other Fire starters in GO have Fire Spin or Incinerate to work with. I got a baaaaaad feeling about this….

So the big talking point is, of course, Blast Burn. It has elevated everything blessed with it, though that hasn’t necessarily propelled everything with it into PvP stardom. (Looking at you, Infernape. 🙊)

But first, let’s set our barometer with what Emboar has pre-Community Day. Fire Blast is pretty awful, and Focus Blast is devastating but VERY slow, especially with Ember. So Emboar currently runs with Flame Charge and the coverage move Rock Slide. Those aren’t bad, especially Slide, but are they enough?

Let’s start with Great League, and we see… well, we see… struggle. For the record, yes, even the Infernape I just mocked is better… without even having Blast Burn. 😬 Yikes! At least the Fire Monkey can overcome stuff like Drifblim, Bastiodon, and Galarian Stunfisk. Poor Emboar can’t do any of that and really operates as just an anti-Grass/Steel/Ice/Bug specialist… in other words, your standard, unexciting Fire type.

But Blast Burn has gotta help with that, right? Right?

Ehhhhh… no, actually. Believe it or not, while it gains Umbreon on the sheer power of BB, it actually LOSES two matchups it won previously: Chesnaught and Skarmory. I’m both cases, Emboar wins if it boosts itself with Flame Charge, and even if the Charge is blocked, the resulting buffed Ember damage finishes them both off, but with Blast Burn (same energy as Charge), assuming it’s blocked, Naught and Skarm both finish Emboar off with moves of their own instead. That’s disheartening for a Fire type.

Now there is one area where BB is clearly superior: with shields down, where it’s raw power not surprisingly does good things that Flame Charge cannot. The new wins with BB, by the way, are Obstagoon, Scrafty, Vigoroth, Sableye, Wigglytuff, and Clefable.

So in that regard, one could argue that Blast Burn is a slight upgrade overall, but especially when coupled with the low energy generation of Emboar, gets progressively worse as shields are factored into the equation, just as Flame Charge rises since it doesn’t care so much about getting shielded… it still builds up Ember regardless. And holy WOW that was a long run-on sentence. Sorry!

Now the larger leagues. In open Ultra League, yes, Blast Burn is now a little bit better than Flame Charge, beating Snorlax and Obstagoon that FC normally could not. But even here, Flame Charge has its perks, beating Melmetal outright thanks to buffed Embers, whereas Blast Burn gets shielded and contributes nothing, leaving Melmetal enough time to follow up with TWO charge moves for the win. Still, BB is better overall, including in Premier Cup, where it picks up another new win (Scrafty) and doesn’t have Melmetal to worry about, making it a straight upgrade in 1v1 shielding… and of course with shields down, where Blast Burn blows Flame Charge away, measuring new wins against Clefable, Crobat, Machamp, Alolan Muk, Crustle, Ampharos, Shadow Snorlax, and Meganium against NO new losses. But still, that remains a win percentage under 50%, in Premier, and with no shields. Remember that with shields up, that amounts to below even a 30% win rate. So yes, Emboar is clearly better with Blast Burn, but it doesn’t really matter. Yet again, even Infernape is better, and the really good Fires like Charizard, Typhlosion, and especially Talonflame FAR exceed Emboar’s win total, doubling it or more in the latter two cases.

Maybe Master League? 🤞 Oh goodness, definitely not. 🥵 One win—against barely viable Heatran—and that’s it. Even in the now-defunct ML Premier Cup, IF that format still existed, Emboar is still dreadful. Heck, it is somehow even worse than Flame Charge, which can at least crawl to victory over Mamoswine and Metagross. Even in the shieldless matchups, Blast Burn Emboar is barely better than Flame Charge, finding new wins only against Melmetal and Machamp.

And no, things are not much better even if you scale up to Level 50. Yes, you gain Mamo and a trio of Steels (Metagross, Magnezone, and Thunder Dialga), but you still can’t beat Dialga with Draco Meteor, Melmetal, or any of the Charmers or Darks that other Fires (/Fighters) like Charizard, Typhlosion, and/or Blaziken can. And this is against Level 40 opposition! Against Level 50 opponents, you’re back to just barely beating Heatran and nothing else. Once again, look how much better Infernape is, with 300 less CP! 🙈

So, does Emboar with Blast Burn gain value in PvP? Yes, technically it does. But is it worth using now? Absolutely not, in my opinion. You can ALMOST get away with it in Great and Ultra Leagues, but there are at last one hand’s worth of fingers you can count of Fire options that exceed it in performance, even if you are The Princess Bride‘s six-fingered man… and that list includes the most forgettable Blast Burn recipient to date, Infernape, and even Emboar’s pre-evolution Pignite! 🐽

So what went wrong? As shown at the beginning, part of it is poor bulk. But other Pokémon—even other Fire/Fighting types, like Blaziken—can overcome that and are PvP-viable anyway. Emboar’s problem is lacking their speed in battle. Blaziken has the almighty Counter, of course, so it’s not a truly fair comparison, but arguably it is the fact that it has the bait-happy Blaze Kick that really pushes it over the top. Infernape has Fire Spin and is a closer comparison to Emboar, but it has Close Combat to help outrace things. The 50 energy required for Blast Burn/Flame Charge is not super expensive or anything, but combined with Emboar’s low bulk and barely average energy generation from Ember means that even that 50 energy is just too much. Emboar usually dies trying desperately to reach a second charge move it needs to win and falling short of it. This is why Flame Charge sometimes outperforms Blast Burn, as at least when Charge is blocked, you don’t HAVE to reach another charge move to still outrace some opponents with the now-buffed Ember damage. What it REALLY needed was a fast move with decent energy generation—like Incinerate that it learns in MLG—but even then it would be better but still behind other established options, across all leagues. This is a Pokémon that unfortunately just does not work in PvP. Not even Community Day moves can save everything.

But that doesn’t mean this Community Day is a complete washout! The shiny IS amazing, and triple stardust is obviously fantastic for making investments in things that DO have good use in PvP. And while I mentioned Pignite mostly as a frame of reference more than pointing to it as a true PvP option, you CAN try and at least hunt down a good Tepig for Little League, and Element Cup in particular, where it’s arguably the best true Fire aside from Vulpix. And it too has a pretty sweet shiny! Consider getting a sub-500 CP Tepig with good PvP IVs as a fun little side mission during Community Day. 🐖

So our TL;DR will be very, very simple today:

So there we have it. They can’t all be winners, and I can’t sugar coat inherently flawed Pokémon like Emboar. But I believe this was still worth a deep look, if not to get you hyped about Emboar, then at least to let you know WHY it’s not good, and what it lacks that other Fire options have that make THEM better. Hopefully, you can better appreciate stuff like Charizard and Typhlosion and Talonflame and such now, at least. 🔥

Until next time (maybe Great League Remix 2.0?), you can always find me on Twitter with near-daily PvP analysis nuggets or Patreon with its tie-in Discord server you can access to get straight through to me for personalized answers to your questions.

Continued thanks to my PvP friends, local and around the world, who have lent their own ideas and suggestions over the last nearly two years of PvP play, and helped teach me to be a better player and student of the game. And thank you for reading… I appreciate your attention and encouragement.

(Photo credit for the awesome header image to Raydenkusumo, who reached out to design it just for this! 🔥 Thanks!)