As the featured Pokémon in the October 2019 Community Day for Pokémon GO, many hoped that Flygon would be the next in a line of Pokémon to see a significant upgrade with a super powerful Community Day move. While certainly not a massive upgrade for it, Flygon’s Community Day move has opened the door to a different play style for it within PvP.

Although eligible for Ultra League, Flygon’s moves and stats work better in the Great League PvP meta and it has been a reliable option in previous Silph Arena cups. This is generally where Flygon will see its most usefulness as the open Great League meta tends to have better options overall. So what makes Flygon a good pick in the Great League, but a bad pick in Ultra League? The answer is pretty simple.

While Skarmory is a top Great League meta pick, it’s really the only one that Flygon hard loses to whereas it hard loses to the unquestioned king of the Ultra League, Giratina (both formes) as well as many of the top Fighting types. So with general talk aside, let’s take a dive into what moves Flygon wants to use, it’s main roles, and what works well with it so that you can effectively use it in PvP battles and be prepared when you face it!

Flygon has or has had access to the following moves in Pokémon Go:

As with many Great League Pokémon, Flygon needs its second charge move to function at optimal capacity. The unlock cost is a little steep; sitting at 75k stardust and 75 candies. However, with its Community Day behind us, you should hopefully have ample amounts of Trapinch candy to stomach the candy cost.

Flygon has two viable movesets that play differently from one another. Due to one of them using a Community Day move, it is recommended to have 2 different Flygons prepared for Great League battles so that you always have access to the most optimal one for any future Silph Arena cups Flygon finds itself as a strong pick in:

The first moveset, and the slightly superior set, is Mud Shot paired with Dragon Claw and Earthquake. This moveset is heavily reliant on charge move pressure as Mud Shot has incredible energy gains at the cost of damage. Being able to shield bait means that this set has a higher peak value as any time Flygon can successfully shield bait to land a quicker Earthquake means it will win some matchups it shouldn’t.

On the flip side, an unsuccessful shield bait means Flygon could lose some close matchups it should win. Even with the slight drawbacks, the heavy, consistent shield pressure Flygon produces with this moveset makes it one of the most underrated lead picks in the open Great League meta. In the absence of a Fairy type, Flygon will normally take a shield or chunk the opposing lead when faced with a bad matchup or simply win while taking a shield in a positive matchup.

Flygon’s second viable moveset is Dragon Tail in conjunction with Earth Power and Dragon Claw. While this moveset is strictly worse at shield baiting, it is more consistent as Flygon is less reliant on charge move pressure with this moveset.

Dragon Tail’s higher DPT compared with Mud Shot means Flygon will perform more consistently in neutral matchups. Earth Power is used over Earthquake for the lower energy cost and chance to lower the opponent’s Defense stat by one stage each time it is used. While the power of Earthquake is missed at times, the higher energy cost hurts much more as Dragon Tail simply doesn’t have the insane energy gains Mud Shot does to circumvent this. Dragon Claw is still valuable as a quick burst option in last hit situations and can be used to shield bait effectively for Earth Power. You can learn more about Earth Power here: Earth Power Flygon is October CD Exclusive 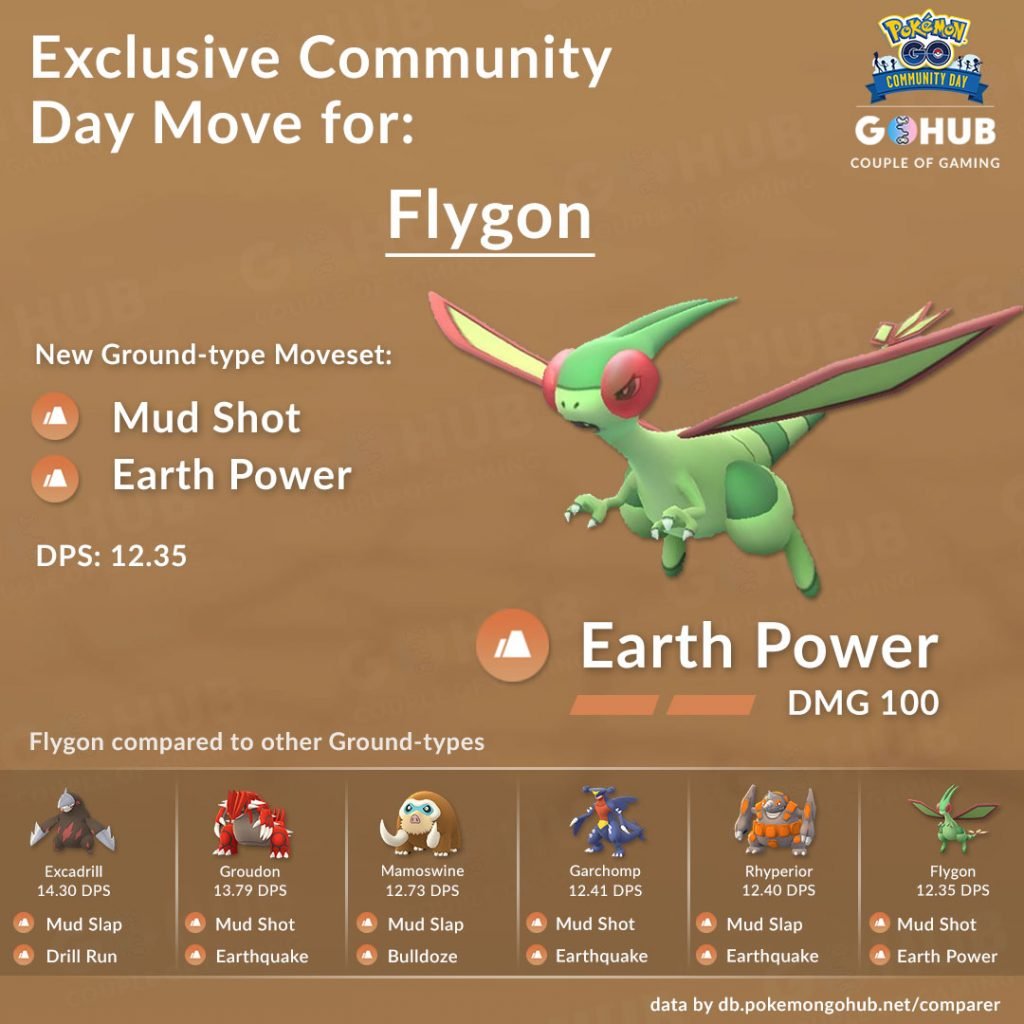 The choice of moveset largely comes down to your play style and the possible Silph Arena cup Flygon finds itself in. Should you feel good about using Pokémon with high shield bait potential, then the Mud Shot set will likely be what you choose. Of course, if you’re more about consistency in neutral match-ups, you’ll likely want to use the Dragon Tail moveset assuming you have a good PvP Flygon with Earth Power.

If you don’t have a good PvP Flygon with Earth Power, just go with Mud Shot and wait for the potential December 2019 Community Day return for getting a good Earth Power Flygon.

Flygon in the Great League

When you’re weak to two of the top Pokémon in Great League play, you’d better have some really good redeeming qualities. Thankfully, Flygon does!

Thanks to its STAB Ground type moves, Flygon does very well against the many Steel types lurking within the Great League. Its secondary Dragon typing also means that the Grass and Water types commonly used to beat fellow Ground types don’t always work.

Because of this, Flygon works best on teams that need help against Steel types, but can’t afford to completely open themselves up to the powerful Grass and Water types in the meta. When using Flygon, you absolutely need counters to Altaria, Skarmory, and Azumarill.

An Electric type, particularly Lanturn, can work very well as it also resists Ice type moves that will definitely be coming Flygon’s way if the opponent has access to them. Bastiodon is a strong pick as well to pair with Flygon.

It can defeat Altaria and Skarmory without the need to use its charge moves and any Azumarill lacking Hydro Pump will also struggle to get past Bastiodon. On top of this, Bastiodon is able to beat almost every Fairy type for Flygon.

Checks to Counter users are also appreciated as most are able to keep up with Flygon’s shield pressure and Counter hits much harder than Mud Shot. A Fairy type of your own, particularly Togekiss, can cover these Fighting types and beat down Altaria. Azumarill can also work and it appreciates Flygon being all but immune to Electric type damage with its rare triple resistance.

When facing a Flygon, it is important to try and move count in a neutral matchup as shield baiting is a big part of Flygon’s game. Being able to call a bluffed Earthquake can be paramount in swinging a matchup against Flygon in your favor. Likewise, try not to be too predictable with shield baiting when using Flygon. It’s important to know the matchups you can get away with going for 2 Earthquakes or Earth Powers without fainting to potentially catch the opponent trying to call a bluff with Dragon Claw. Fairy types are your best friends to guard against this.

Togekiss is the absolute hardest counter to Flygon there is as it double resists both of Flygon’s STAB types and deletes it with Charm. Even if Flygon gets cute with Stone Edge, it isn’t strong enough to KO Togekiss and the Dragon Tail set won’t even reach Stone Edge in time to use it. Among top meta Pokémon, Skarmory is the best option to combat Flygon. While it can’t delete Flygon quickly like Togekiss can, it also doesn’t have to worry about potential shield baiting as it resists both Dragon and Ground type moves.

While it might not be a meta defining Pokémon along the likes of Skarmory, Azumarill, or Medicham, Flygon certainly is a Pokémon worth considering adding to your Great League roster. If nothing else, its performance in the Kingdom Cup has shown us that it can be a top contender within Silph Arena metas and that alone should be enough to invest in at least one for those who compete in those on a regular basis. Due to having two viable movesets, Flygon has some unpredictability to it now until you see its fast move, which is something it didn’t have before the October 2019 Community Day.

The biggest obstacle to overcome in open Great League matches is obviously Flygon’s weakness to some of the top meta options, particularly Skarmory and Altaria. However, when you consider that all teams should be prepared for these threats anyway, that weakness isn’t as big as you would think at first glance. Flygon is worth considering and if you haven’t invested in one yet, you might want to. If nothing else, it has the moves to succeed in future Silph Arena cup metas that it’s allowed in and the recent addition of Earth Power from Community Day means it’s not confined to just one playstyle anymore.