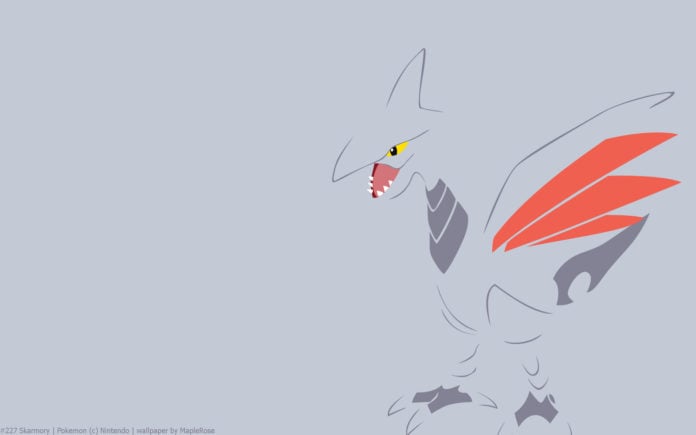 Skarmory, the Armor Bird Pokémon, was released back in February of 2017 with the main release of the Johto generation of Pokémon. There have been many ways to catch Skarmory over the years as well. Skarmory is available to catch in the wild, hatch from 5km eggs (previously 10km eggs and 2km eggs during special events), catch from research tasks, and is Tier 3 raid boss (although not currently).

Its shiny form has yet to be released and given its very limited use in PvE scenarios, there was very little reason to actively seek out this Pokémon. At the time of writing this article, the latest update showed that Skarmory’s shiny form will be released in the beginning of November 2019. It will come back with increased presence in eggs and back as a tier 3 raid boss.

In December 2018, Niantic introduced Trainer Battles giving Skarmory a place to shine in the Great League tier. Skarmory has amazing typing and outstanding defensive stats with decent stamina and attack, making it ideal for the Great League tier. In fact, Skarmory has been a staple for many Silph Arena tournament metas and was even banned in the most recent Sinister Cup to make room for other Pokémon.

With the introduction of a pretty awesome shiny sprite coming, its the perfect opportunity to find a stylish made for PvP Pokémon. Prepare for an in-depth look at Skarmory’s place in the Great League.

Skarmory has a maximum CP of 2108. Skarmory is currently the only Steel and Flying type in the game and will remain unique until generation 7. This unique pairing compliments each individual type very well, and has an impressive 10 resistances, while only having two weaknesses, Fire and Electric. Skarmory’s stats are as follows:

Skarmory has been available for over 2 years now and has been available to catch in every way possible: wild, raids, eggs, and research. Finding that ideal IV spread should be easier given is availability, but can still be a little tricky given its rarity in the wild. Since Skarmory maxes above the 1500 CP limit for Great League battles, the ideal IV spread will have 0 attack, 15 defense, and 14 stamina. This is only obtainable in the wild.

Given its rarity in the wild, your best bet of finding a Skarmory in the past was probably through raiding, eggs and research. However, there were two events fairly recently that had increased global Skarmory spawns. In August 2019, we saw increased spawns for the Yokahama Go Fest 2019 event and in September 2019, we saw increased spawns for the Global Challenge, Global hatches event. Both of these events gave you an opportunity to find that PvP perfect Skarmory since the release of trainer battles at the beginning of the year.

If you missed these events or did not find one with a good PvP spread, then your best bet is through trading with Ultra friends or less. There are IV spreads possible with good, great, or ultra friends in the top 20 ranked IV spreads for Skarmory, but not with best friend trades. It is possible to get a decent PvP Skarmory from a best friend, but it would be best to trade with other trainers. As always, look to maximize defense and stamina stats and minimize the attack stat.

Use a shiny Skarmory for extra flare, which will be released just before or after this article is published. The ideal IV spread will reach its 1500 CP limit at level 27.5, which is a decent stardust cost depending on the level it is caught. Unfortunately, Skarmory features a hefty 75k stardust cost to unlock its second charge move, so you will want to choose your Skarmory wisely.

Pro Tip: If you can’t find that perfect PvP Skarmory do not fret. You can still use Skarmory without the second move because Sky Attack performs so well in most metas, while you hunt for the perfect one.

Since the inception of trainer battles, Skarmory has been an ideal pick for any team. The Boulder cup, Silph Arean’s first themed cup tournament, heavily featured Skarmory on almost every trainers team. In fact, Skarmory was so good that many trainers brought two Skarmory to the tournament, leading to the new rule of only one Pokémon of each species on any given players team.

Skarmory’s fast moves include Air Slash Flying and Steel Wing Steel. Air Slash is a decent move, offering both 3 DPT and 3 EPT with STAB bonus. Steel Wing offers slightly more damage for slightly less energy gain, with 3.5 DPT and 2.5 EPT and STAB bonus as well. Both of Skarmory’s fast moves are viable and can be situationally useful depending on the meta. However, Air Slash as been more meta relevant in tournaments seen so far. In most cases, it will pay more to have that extra energy gain for more charge move opportunities. Additionally, Steel damage is not very offensive in nature and is not very effective against both of Skarmory’s weaknesses, whereas Flying is only not very effective to Electric and neutral to Fire. In most scenarios, Air Slash out performs Steel Wing and therefore we would suggest to run Air Slash, but keep in eye out for future metas.

Skarmory’s charge moves are great, but lack coverage which it arguably doesn’t need. Skarmory has three charge moves with two of them being the stand out picks, which makes deciding which two attacks to choose a non-decision. Sky Attack and Flash Cannon are solid choices and provide the STAB bonus from Skarmory’s Flying and Steel typing.

Brave Bird under performs Sky Attack in every aspect and should not be used. Sky Attack offers 80 damage for 45 energy with a respectable DPE (damage per energy ratio) of 1.78. This is definitively the best Flying type move in terms of DPE and relative low energy cost.

The best moveset will feature Air Slash with Sky Attack and Flash Cannon. As mentioned previously, if the 75k stardust cost for a second move is too costly for you or you don’t have a good IV spread yet to invest in, then you can get away with just Air Slash and Sky Attack in most metas.

Skarmory really is a jack of all trades in the great league. It is a powerful lead Pokémon, but can also be a very effective defender, attacker, or closer depending on the team composition. Skarmory’s impressive bulk and moveset allow it to exert extreme pressure while tanking charge moves very effectively. In some cases, Skarmory can out perform its counters and is an extremely effective switch in Pokémon when you lose the lead.

Skarmory is stronger than ever after the most recent move shake ups and PvP changes. Skarmory boasts a meta solidifying double resistance to Grass, Bug, and Poison type attacks, making razor leaf users shiver with fear. Razor Leaf received a sizable power buff back in February 2019 and made Pokémon like Venusaur, Meganium, and Tropius more meta relevant than ever. Skarmory is likely one of the best counters to these Razor Leaf users, and can actually farm grass types for multiple Sky Attacks on the next Pokémon. In addition, Charm has been recently added to the move pool and is almost a Razor Leaf clone, making it a very powerful fast Fairy type attack. Given Skarmory’s steel typing, it is able to resist charm users as well! Finally, if you didn’t think that was enough to make it an amazing pick, Skarmory is resistant to Dragon and Ground type attacks, which are common offensive types utilized by Altaria, Kingdra, Whiscash, and Quagsire.

Not only does Skarmory’s Steel and Flying typing resist Grass, Fairy, and Dragon type attacks, arguably the most powerful attacking types in PvP, but its typing synergizes so well that it is able to negate 4 potential type weakness. Flying types would normally be weak to Ice, Rock, and Electric, but steel typing removes ice and rock weaknesses. Steel types would normally be weak to Ground, Fire and Fighting types, but the flying type removes fighting type weakness and actually provides resistance to ground types. Skarmory is the only steel and flying type currently available, making it a force to be reckoned with.

Skarmory, like all Pokémon, does have a few shortcomings. As previously mentioned, Skarmory is weak to Fire and Electric types. Its moveset is usually able to deal neutral damage to fire types, but is unable to hit electric types with effective damage. Skarmory is exceptionally weak to electric types and you will want to keep an eye out for the likes of Lanturn, Magnezone, Minun and Raichu (Alolan or otherwise). With shield advantage, Skarmory can still beat fire types because many of them do not have much bulk. However, electric types are able to beat Skarmory even if they are at a 2 shield disadvantage. If your Skarmory gets locked into a battle with an electric type, it’s best to not waste any shields trying to save your Skarmory. On the other hand, if you get locked into a fire type match up you can still come ahead if you have energy or shield advantage. It is also important to note that Skarmory struggles with Rock and other Steel types as well. Skarmory lacks the coverage that other Pokémon tend to have, which gives them the upper hand. For example, Probopass has access to electric moves and the new Klinklang as well. Also, rock and steel types typically have high defensive stats and resists Skarmory’s moves. Picking a team that covers these weaknesses is crucial.

Skarmory’s weakness to electric types can be devastating which is why it synergizes very well with ground types, especially Swampert because it can cover fire, rock and electric types. If locked into an electric type match up with your Skarmory, let it faint quickly and bring in Swampert to turn the tides. Due to its resistance to electric, you can save your shields and prepare for the next incoming Pokémon. Another Pokémon that synergizes well with Skarmory is Azumarill. Skarmory is able to cover Azumarill’s grass and poison type weaknesses, while Azumarill is able to cover Skarmory’s fire and rock type shortcomings. In addition, Azumarill provides extra resistance to dragon type attackers like Altaria, the highest ranked PvP Pokémon. These are just a few examples of how Skarmory can interact with other Pokémon and you will want to look for these types of synergies in new tournament metas.

Not only is Skarmory a uniquely typed Pokémon, but it also counters very powerful, meta-relevant Pokémon. Other very common PvP Pokémon like Venusaur, Medicham, Quagsire, Cresselia, Forretress, Togekiss, and Tropius are all countered hard by Skarmory. When looking at the rankings of all current Pokémon, Skarmory is listed as the 5th best pokemon for PvP and will likely keep this ranking even as new generations of Pokémon are released. If you don’t have a Skarmory yet, then get out there and start hunting and trading with friends.

Pro Tip: Despite its dragon type resistance, Altaria and Zweilous can still beat Skarmory in the 2 shield scenario. Keep this in mind when building a team.