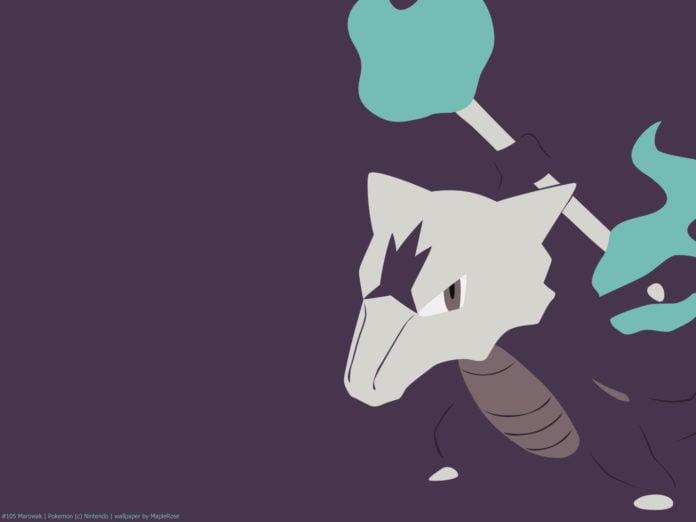 In this article we will discuss Alolan Marowak’s new move sets with Shadow Bone taking front stage in most scenarios. But first, let’s take a look at Alolan Marowak stats and typing.

Alolan Marowak is a Fire and Ghost type Pokemon with a max CP of 1835, 144 Attack, 186 Defense and 155 Stamina. Alolan Marowak is vulnerable to Dark, Ghost, Ground, Rock and Water type moves. Marowak is boosted by Sunny and Fog weather.

Alolan Marowak’s Max CP is 1835 (with the stats available at the time of writing this article) and we seriously hope you didn’t max out yours. If you are planning on doing so, stop right now and DON’T DO IT! As you’ll see soon, A-Marowak main use is in Great League.

Alolan Marowak’s claim to fame was during the Silph Arena Kingdom Cup, where the ubiquitous Lucario and Bastiodon demanded hard counters due. In open PvP, the popularity and use of Fighting and Psychic-type picks, especially Medicham, paved a way for Ghost-types like Alolan Marowak to enter the rosters of many trainers.

A total of 9 resistances backed by admirable bulk helps offset Alolan Marowak’s 5 relatively common weaknesses. Outside of its specific anti-meta role, Alolan Marowak generally doesn’t perform as well as other popular GBL picks, but it can still deal solid damage thanks to Shadow Ball Ghost.

Regrettably, Alolan Marowak really doesn’t do any good in other Leagues. In Ultra League, can’t reach its full potential with a CP of 1835, so in the end, its easily outclassed by other Ghost Type Pokemon like Giratina.

Master League is a problem on its own, as gets destroyed in no time due to CP / HP differences.

Now, let’s talk RAW numbers. Until now, Alolan Marowak best move set was Fire Spin, Bone Club and Shadow Ball. With Shadow Bone added to its move pool, Shadow Ball is not the best pick in certain circumstances. Let’s look at the stats of each move and see what’s going on:

Initially, Shadow Bone seemed like a slightly weaker version of Shadow Ball, at least that’s what one might see if you only look at DPT and DMG/ENG metrics. However, Bone has a 20% chance to cause nifty side effect of reducing your opponents defences, which makes it quite interesting.

Despite dealing less raw damage, Bone has the ability to overturn a fight, which makes the damage difference almost negligible in most matchups. As Shadow Bone makes the most sense as a straight Shadow Ball replacement in PvP, we went ahead and compared both moves on PvPoke to see what happens.

In 1v1 unshielded matchups, force meets dexterity. Shadow Ball’s raw power is challenged by Shadow Bone’s chance to activate a defensive debuff. Although the results were all over the place, in most cases we would recommend Shadow Bone.

And lastly, in mixed shielded matchups across all available GBL Pokémon, Shadow Bone and Shadow are neck to neck. We observed Bone struggling to keep up with Shadow Ball in scenarios where the opponent is quite bulky.

After running the sims, we think it is generally okay to say that Shadow Bone looks like it’s a solid pick for Alolan Marowak, at least for GBL matchups. Shadow Ball is – in many cases – a pure overkill by the time Alolan Marowak reaches it, but it still has its advantages  against tankier opponents (Tropius, Hypno, Clefable, etc.).

Aside from those particular opponents, Shadow Bone is frequently able to land killing blows and fast enough to allow squeezing in an extra charge move. A charge move that wouldn’t be available if you had Shadow Ball.

That, combined with the chance to reduce your opponents defences, makes Shadow Bone our preferred pick over Shadow Ball.

Shadow Bone Alolan Maowak seems like an interesting option to use in the upcoming Halloween Cup, so prepare yourself if you are going to participate.

So, does this means that Shadow Ball Alolan Marowak has no use now in PvP? Not at all, my fellow Trainers!

Shadow Ball is still a very capable move, and it does have advantages in certain scenarios:  Energy / Shield leads, against opponents with a large health pool and a myriad of other situations where you simply want raw damage output.

As useful a tool as they are, simulations are NOT real world, just a snapshot of how things SHOULD, and often, but not always, go. So don’t go out and trash any Shadow Ball Alolan Marowak you already have on hand.

The choice between the two is ultimately up to your preference, with arguments for either earlier accessibility or stronger damage. Going for straight Shadow Bone can yield more consistent results than attempting to bait shields with Bone Club, in which case Fire Blast can be selected instead to surprise unsuspecting opponents.

But if you still prefer to go with Shadow Ball, that’s totally fine!