Spice Pick of the Week 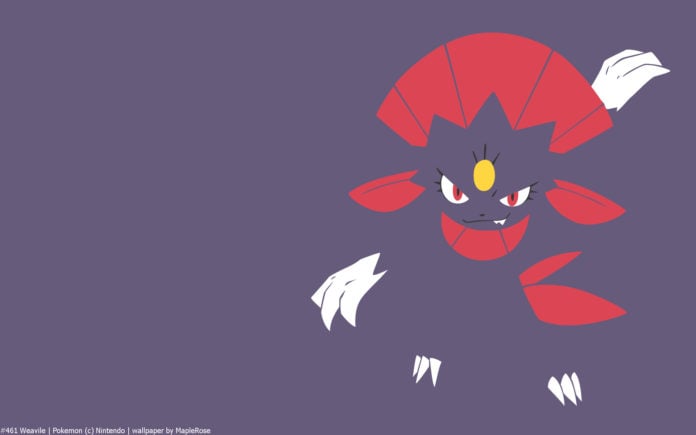 If you’re in the mood to break the monotonous Giratina Altered mirror match or stop your self from raging over a Moon Blast debuff, why not try this week’s featured “spice pick” of the week, Weavile.

At first glance, this glassy Dark/Ice type with a heavy weakness to Fighting type might make you think otherwise, but after looking up some simulations on PvPoke, Weavile has some important wins over the Ultra League titans Giratina Altered and Cresselia, and some close wins over notable meta mons Snorlax and Alolan Muk. Weavile can even threaten Armored Mewtwo, just make sure to block that Dynamic Punch.

What makes Weavile deadly is the impressive attack stat combined with its move pool. We have all seen how quickly Snarl racks up energy from Shiftry and Alolan Muk. Before you know can react Weavile might have an Avalanche or Foul Play (or two) charged up, waiting for the next Pokemon you swap in. We’ll dive a little deeper into its charge moves in a bit, let’s take a look at Weavile’s typing.

The Ice typing is a very powerful offensive typing. Unfortunately Ice types only resists Ice, but Weavile’s primary Dark type gives it an important Psychic, Dark, and Ghost resistance in the Ultra League.

Weavile is a textbook example of a glass cannon. It hits hard and needs shields to be effective. Being a Dark/Ice makes it vulnerable to: Bug, Fairy, Fighting, Fire, Rock, Steel. Weavile needs to swap quickly if it encounters common Ultra League threats such as Scizor, Registeel, Obstagoon and charmers like Togekiss or Clefable.

We all know how amazing Snarl is at generating energy, and when Weavile is equipped with it’s best move set Snarl/Avalanche/Foul Play, it becomes a spam machine. To get some perspective on how deadly Weavile with energy can be, it can store 2 Avalanche or 2 Foul Plays with just 7 Snarls!

Then again, Weavile is a “spice pick” so feel free to try out Focus Blast to pick up wins against Steelix, Empoleon and Lapras! Just be sure to have a separate Cresselia and Giratina – A counters if you decide to bring the extra spicy Weavile.

Weavile can take some hits in Ultra League so you’ll definitely want to invest a shield or two to get the most out of this powerful glass cannon. If you line it up properly, the charge move spam will overwhelm your opponent to force a shield or just nuke their mon. Be sure to switch quickly if you see one of the many Fighting and Fairy type running around GBL Ultra League.

Having an energy advantage is what makes Weavile deadly. Winning or losing the lead in GBL is like flipping a coin. This makes Weavile work best as a lead. It’s better to switch Weavile out of a lost lead than to switch Weavile in on a lost lead. It’s best to rack up enough energy (7 Snarls) on Weavile and throw a back-to-back charge moves rather than throwing a charge move immediately. Snarl is a three-turn there’s a chance Weavile can sneak in a fast move as opposed to losing out on a fast move if you immediately throw.

The best-case scenario will be if Weavile catches Giratina-A or Cresselia in the lead. Worst case scenario is catching a Fairy, Fighting, or Fire type in the lead. Any Pokemon that doesn’t hit them with a super effective fast move, it’s possible to get you back in the game.

If you’re caught with a Dragon Breath Giratina-A, it’s a bit of an uphill battle, definitely throw an Avalanche and swap whether your opponent shields or not because by this time Weavile will have been chunked by Dragon Breath. If you catch a Shadow Claw Giratina-A or Cresselia be prepared for your opponent to switch unless your opponent underestimates Weavile, invest a shield and wipe them out!

If you’re caught with a neutral lead like Swampert, Articuno, or Snorlax, I’d recommend farming at least 3 Snarls before you switch to hit the ground running in the late game. Keep in mind that Weavile’s Dark typing makes them resist Ghost and Dark type fast moves from common picks like Snorlax or Alolan Muk, and not so common picks like Lickilicky and Typhlosion. These are lead scenarios to farm a little energy and switch, Weavile can handle their fast moves but not necessarily their charge moves.

Weavile can beat Snorlax and Alolan Muk with its HP in the red, but if you have a Pokemon like Cresselia, or your own Snorlax in the back to deal with your opponents Cresselia and Giratina-A, then definitely go for the K.O! To get the most out of Weavile, it would be best to switch out after the 1 shield or farm enough for 1 charge move before a switch, it’ll be a shame to lose your “spice pick” powerhouse to a lost lead.

The reason why Weavile works best as the lead since it’s the best way to get an energy advantage. Keeping Weavile in the back is risky, it’s like hoping multiple coin flips land in your favor. Weavile can get stuck in a bad matchup in the back, especially with the common Charizard/Double Charmer (Togekiss/Clefable/Granbul) line or the newly popularized Cresselia or Giratina-A/Double Steel (Escavelier/Melmetal/Registeel) Line. Even with two shields, Weavile does not have play against these lines.

Always keep your switch tray up and farm as much as possible when running Weavile. You can think of it as the Haunter of Ultra League, except Weavile does not have the Shadow Ball nuke (unless you’re brave enough to run the extra spicy Focus Blast). Definitely need some quick taps and knowledge of matchups when choosing Weavile. It’s worth the pick just to experience the satisfaction of throwing a back to back Avalanche or Foul Play at an unsuspecting Giratina-A or Cresselia. You can surprise the opponent by not shielding a Moonblast from Cresselia. Yup, Moon Blast does NOT one-shot Weavile. Dealing with Giratina-A (Shadow Claw) and Cresselia is what Weavile does best so be sure to save it for these matchups!

There is a glaring difference between Weavile in Great League and Weavile in Ultra League. Much like Haunter, Weavile is the glassiest of cannons. Unfortunately, unlike Haunter, Weavile has many weaknesses and a couple of x2 weaknesses. This makes it a very huge risk to bring Weavile to a Silph Tournament since they are held in Great League. Then again, this article is about spice picks so don’t feel discouraged to bring em!

Weavile was eligible for the this unique and slightly complicated cup with popular meta picks such as Umbreon, Alolan Ninetales, Nidoqueen, Bibarel, and Suicune. I can see Focus Blast Weavile having some play in this cup against the Normal/Water type Bibarel and Dark type Umbreon. Catch Umbreon on the switch and make the opponent regret using it as a safe switch.

This dual-type based cup included top meta picks such as: Altaria, Whishcash, Bronzong, Noctowl and Alolan Marowak. Even though Weavile is not ranked as a top meta pick for this cup, there is a Weavile combo that can be pulled off when you align it with Bronzong. So the combo will require you to get Weavile switch locked with your opponents Bronzong, first properly shield the Bulldoze, then get one Foul Play to hit Bronzong, lastly, shield twice if necessary to farm Bronzong down. Weavile can take 1 Psyshock and resists Confusion so you call the bait properly, Weavile can take down Bronzong, have switch advantage, and have almost a 100 energy with little more than a half it’s life left. That’s huge if your opponent has an Altaria or Noctowl in the back, chances are your opponent is down to 1 shield and Weavile has 2 Avalanches stocked up. You might need to use both shields, but that’s two for one with only Weavile! A Pokemon advantage is better than shield advantage!

As stated before, this cup was essentially open Great League with a caveat. Without getting too into details again, this cup required you to choose a Pokemon from each Gen 1-5. Top meta picks included: Registeel, Azumaril, Hypno, Altaria, and Toxicroak. At first glance Weavile has some play against Hypno and Altaria, but considering the significance of every pick and the meta as a whole made Weavile more of a liability than a threat. Hypno with Fire Punch was also lurking around which nearly one shots Weavile.

Finally! Weavile made the cut! Sorcerous Cup featured Ice, Poison, Fairy, Psychic, Normal type Pokemon with top meta picks such as: Azumaril, Hypno, Bronzong, Toxicroak, and Noctowl. This cup focused primarily on having an energy and shield advantage. That’s essentially how you want to play Weavile in the first place. There were scary threats such as Medicham and Toxicroak running around but there were also farmable and favorable matchups for our Weavile!

For example, Azumaril typically ran Play Rough and Hydro Pump in this meta. Each charge move takes a good while to charge up so if you lose the lead against Azu, Weavile can farm up at least 4 Snarls before switching, giving it a charge attack ready to fire off at your opponents backline. The Bronzong farm strat can be applied in this cup as well and not too many Hypnos were running Fire Punch so that’s another farmable match up! Frosslass is another farmable matchup, you won’t come out with a huge energy advantage or much HP, but if you match shields with Frosslass, you can give a parting gift of 1 charge move to your opponents next Pokemon.

The final cup for Silph Season 2 is the Catacomb Cup. This cup features: Dark, Grass, Ice, Bug, and Rock types. The meta for this cup is brand new and still forming, but notable meta picks include Sudowoodo, Umbreon, Zweilous, Lapras, and Venusaur. This cup is where Focus Blast Weavile goes to town! Out of those top 5 meta picks, Weavile can nuke both Venusaur (with Avalanche) and Lapras (with Focus Blast) with 1 charge move each and even farm Umbreon before nuking it with a Focus Blast. There are hard counters like Sudowoodo and Breloom, but if shields are down and Weavile has energy Breloom gets one-shot by Avalanche!

Those scenarios sound too good to be true but with hard counters such as Rock types, Bug types and counter Fighting users everywhere, the dream scenario explained above will be far and few in between. As always, Weavile as a lead is a must. It’s better to lose the lead and farm down after with Weavile rather than being stuck with Weavile and 2 shields against a counter user. We all know how much it hurts to lose with 2 shields. There are no statistical ratings for this cup since it’s brand new, but Weavile’s currently rank 30 on pvpoke.com.

Much like my previous spice pick, Alolan Sandslash, Weavile is a high risk, high reward, style Pokemon that can get dangerous very quickly. It has the potential to sweep an entire team with 1 shield left or eat up both your shields and leave your back line hanging. It definitely has play depending on the Silph Cup meta for Great League.

As with every spice pick, be sure to do your homework on Pvpoke to figure out proper matchups and shielding scenarios to run Weavile to its fullest potential!