How Hidden Power is Boosted with Weather Effects

Getting used to the new weather feature and figuring out all the ways it buffs different Pokémon has come with many new and interesting aspects to the game. One thing a few people have found particularly interesting is how Hidden Power is affected by weather.

As most of us know, Hidden Power is a fast move with a base power of 15 that a few Pokémon get that can be any type. The type it can be is chosen randomly, and it cannot be normal or fairy type. In the main series games Hidden Power is chosen by IVs but there is no known correlation between IVs and Hidden Power in Pokémon Go yet. Currently, the Pokémon that get this move are:

Each different type of Hidden Power is not boosted in their respective weather, however, they are all boosted in partly cloudy weather, which boosts Normal and Rock type moves.

In the main series games, Hidden Power always shows as a Normal type move on the battle screen, although it’s effects reflect that of whatever Hidden Power type the Pokémon has.

It seems that in Pokémon Go the same effects apply, as all of the Hidden Power moves of all the Pokémon in a single game were boosted 20% during partly cloudy weather, despite all having different types. Proof: 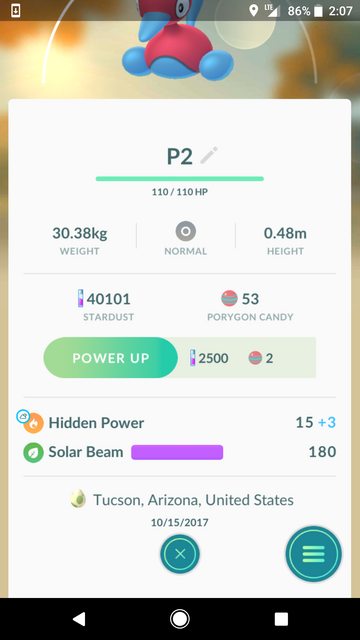 This might not be particularly game changing in any way, though a boost to any move is nice when fighting a gym or a raid boss, though it is an interesting face.

Similarly, it is worth noting that a Hidden Power of a single Pokémon’s type cannot be changed. Hidden Power is useful because it can provide a Pokémon with a move of a type it would not usually have, and provide for more type coverage options.

So happy hunting for Hidden Powers, and good luck!