I was lucky enough to make last minute travel preparation and attend the Montreal Safari Zone thanks to GoHub! On the whole, PoGo players tend to be very critical of the game we love and its “developers” See, there I go doing it! The point is, it can be good to reflect and evaluate constructively on what worked and what didn’t. I would also like to give some tips for improving your next event (or maybe you have some for me!)

With enough constructive feedback, we can hopefully improve future events. The best example occurred two months ago. At that time an update impacted the switch mechanics of pvp and a huge combined response came from the pvp community leading to the changes being reverted just two days later.

It’s important for me to disclaim that I am probably not a typical player. I play daily but nearly all of my efforts are related to or aimed toward Player vs. Player (pvp) battles. As blasphemous as it is, I do not go out of my way to grind for shinies, nor do I care particularly much about 100% IVs. I will go so far as to mulch Hundos that aren’t raid relevant. gasps My review of the event will obviously be affected by how I play the game, so keep that in mind.

Obvious pandering An homage to my bilingual hosts. For those who are culturally-challenged, this is some of the good stuff.

Tropius being exceedingly hard to get for North Americans made this alone nearly worth the trip. It was all over which lead to so many opportunities to catch some for your entire community back home (or reroll aggressively for those sweet, sweet pvp IVs…which 9 times out of 10 will roll 15 attack… le sigh).

Unown are a little less obviously exciting. If this is your first event or if you are a medal hunter and want every letter/punctuation then the ‘Dex entry or progress is worth something, but these get less than exciting long before you leave.

Trapinch for the upcoming Community Day. I don’t always get to play for the whole 3-hours, so this was a great way to farm some candidates ahead of time.

Shinies are a big draw, possibly more so for some than the regionals. With the limited number of different spawns, you were almost guaranteed shinies of a chunk of what was spawning.

Field Research quests, as per usual for these kinds of events, were easy to complete and rewarded players with mostly more chances at things they were already catching. The Nincada research was plentiful and allowed a lot of opportunities for an otherwise rare Pokemon. It took me until writing this to appreciate how useful those catches/candy could be.

Hatches were an interesting and exciting part of my Safari. Like GoFest, all of the eggs were 2k (further improved advantage of the 1/2 walk distance of the Ultra Bonus Unlock). Instead of like GoFest where the hatches reflected things catchable at the event, the eggs here contained anything from the pool of hatchable ‘Mon. This lead to strings of nonsense hatches, but there were just enough exciting ones to keep it interesting. Gible was one of my very first hatches of the event! Other notables included a litwick, shiny Seel (a new one for me), and towards the end a Deino.

The park was much larger than the event itself (which was still very sizable including a ~2mi ( ~3.2km) walking loop for the Safari Zone Area and it was not well indicated where the event was actually taking place. If you took the Metro to the park, it brought you out where there was signage leading you to the play area, but otherwise you could be wandering around a very large park. Go Fest(s) this year (and possibly always before) had maps of the exact play area, whereas this did not. This lead to me being a few minutes late to the Zone. Not the end of the world, but not ideal either. There were event maps on location which would have been helpful ahead of time. 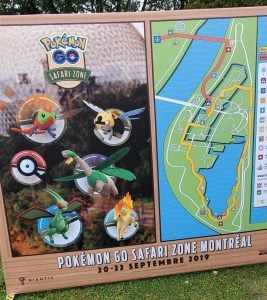 The Tropius definitely kept me engaged, still getting excited about them even after catching so many, but the overall lack of variation of spawns were thin by the end. As I mentioned before, it did lend to some concentrated shiny hunting, especially for newcomer Yanma, but it did feel a bit grind-y.

At GoFest Chicago the spawns met different playstyles. You could go to an area for shinies and ho hard in the paint for shinies, or you could hit up another area for those never before seen level 1 Mawiles and Absols. Catching low level wild Togetic was amazing to pvpers looking to make a Togekiss for Great League. That allowed me to break up the monotony. At Safari Zone, I found I was less able to escape it. I did settle into a good shiny checking routine, catching what I could regardless, but it left a little to be desired.

Honestly, there was nothing truly awful about the event (despite my droning in the previous section). I included this section for the parallel and to reiterate that while I am critical of some issues, ultimately I had a great time and would recommend these events in the future. People coming together for Pokemon Go is amazing.

Prepping for Your Own Adventure

I’ll reiterate that I had a great time and I was lucky enough to attend with my amazing Poke-wife (also married IRL). I would definitely recommend attending any event near you, but tickets go quickly. I’ll leave you with my event stats for