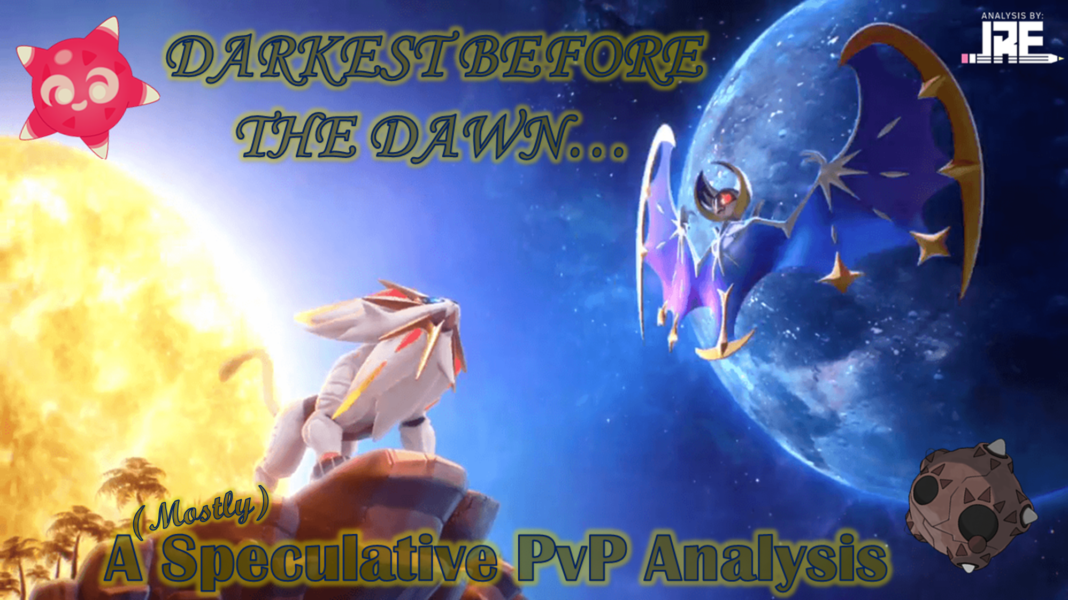 The Season of Light is upon us, arriving just three days after the release of this article. So much is on the horizon — surely a long-overdue move shakeup, new Community Days (perhaps with the thematic Litwick, at long last?), a mystery event in just five days that we know nothing about, and of course new Pokémon — but even this close to the new season, we know practically NOTHING. About all we DO know are the strong hints that the Pokémon Sun and Moon Legendaries, SOLGALEO and LUNALA, are coming sooner or later, as well as strong hints about Minior (who I will admit was done a great disservice by being basically an afterthought in my forward-looking analysis article in June). And while we STILL don’t know the moves for the Legendaries at the time of this writing (hopefully we will soon…?! 🤞), based on their relatively limited movepools in MSG, I think we can take some logical guesses.

So, let’s start with what we DO know and then spend a little time roughing some numbers with some best guesses to set the stage. After our Bottom Line Up Front, of course….

Let’s begin with the one known commodity, as we already know its moveset: MINIOR.

So in that analysis I did back in June, I took only a passing glance at Rock/Flying Minior, admittedly not even realizing it had two forms! My bad… sorry, y’all. I looked then at what was its Core form, which is awesome looking and hits like a truck, but has NO bulk to speak of (seeing as how its rocky exterior is all stripped away) and looks quite pitiful in Great League and Ultra League alike. It’s literally worse than Aerodactyl, who has only ever broken out in  Flying Cup.

But of course, silly me forgot about the original Meteor form, which is quite the opposite. It has more overall bulk (in Great League… it doesn’t get nearly big enough for Ultra) than things like Galarian Stunfisk, Tropius, Defense Deoxys, Altaria, Dewgong, and others… on the same level as Lickitung. (Most halfway decent IVs on Minior give it a higher stat product than even #1 rank Licki!) In short: it’s quite bulky. And thankfully, while it doesn’t have a fantastic movepool, it’s more than good enough to usually get the job done. And of course, that only gets better with top notch IVs, with pickups like DDeoxys, Shadow Walrein, Cofagrigus, and even Umbreon. 👀 This in addition to already handling all the big-name Flyers, most Grasses (including scary Trevenant) and Poisons, basically all Fires, and even most Ground types, plus many other big names like Wigglytuff, Vigoroth, Obstagoon, Toxicroak, Jellicent, Araquanid and more. Yes, it has obvious limitations, with many dedicated Water, Electric, Steel, Rock, Psychic, and even Fighting and Ice types fending it off, and there are some huge names in there. But at least for Limited formats, and perhaps on the right Open GL team, Minior (Meteor form) looks like a potential rising (rather than falling ☄️) star.

The one downside? It’s rather expensive. The second move only costs 50,000 stardust, which is not overly prohibitive, but it’s usually going to dip in XL territory… all the way up to Level 48 for the #1 IV specimen. A more run-of-the-mill Minior still pushed into the middle 40s. However, if you’re willing to give up some ground (and wins like Umbreon, Shadow Wally, Cofag, and DD, as well as Pelipper), you can build a non-XL Minior that can still do everything else, and thanks to its higher Attack, actually adds Alolan Ninetales with Charm to the win column. Not GREAT, but there are crazier ideas.

LET THERE BE LIGHT ☀️

Alright, now we start applying some true “Future Sight”… aka, guessing. 🙃 While I have a long history of specifically avoiding speculation, unfortunately Niantic has left me little choice, as I fear a LOT of info dumping is going to happen in a very short time very soon and leave me not enough time to analyze it all before the “Season of Light” begins. (Commence shaking my fist at the sky like an old geezer at the neighborhood hoodlums.)

Solgaleo is a Psychic/Steel type, which leaves it with four weaknesses (Dark, Fire, Ghost, and Ground), but a whopping 10 resistances (including Dragon, Fairy, Flying, Grass, Ice, Normal, Rock, and Steel) and two double resistances (Psychic and Poison). We’ve had a couple other Psychic/Steels with varying levels of success (Bronzong/Bronzor and Metagross), but they all manage to carve out various slices of their respective metas. It’s a GOOD typing combination. Between that and a WIDE variety of tasty charge moves, there’s potential here.

However, it starts and likely ends with the fast moves. Solgaleo’s MSG selection consists of Snarl and Fire Spin, but also truly awful things like Metal Claw, Iron Tail, Zen Headbutt, and Hidden Power. Blech. Fire Spin could potentially be okay with spammy enough charge moves, but all other fast moves than Snarl are middling at best, and that’s putting it VERY nicely.

But what we should REALLY hope for is Snarl. With that, it looks at least viable even with less-than-ideal charge moves. Some of the better charge moves it can learn (ones we should be happiest to see if they show up) including Psyshock (with STAB), Wild Charge, Flame Charge (though that admittedly lacks a little synergy with low-powered Snarl), Rock Slide, and Crunch, with lesser but still maybe okay substitutes like Flamethrower, Stone Edge, Psychic (the move), and Thunderbolt being okay IF Solgaleo also has Snarl. Less exciting would be things like Iron Head, Future Sight, Outrage, Thunder and many others. MORE exciting would be Superpower or Close Combat, but I think that’s too optimistic to realistically hope for. (Niantic, PLEASE prove me wrong!)

Long story short, though… it will likely be okay, but unfortunately has to work around Metagross that sits squarely in front of it with its awesome Meteor Mash. Solgaleo has a lot more coverage options and roughly the same stats as Metagross (comparable Attack and Defense and HP basically just being swapped), so there is certainly the potential, but Meteor Mash is a hard thing to compete with. We’ll see what happens! But if it doesn’t get Snarl and/or Fire Spin, you can forget about it without really even needing any further analysis.

As teased in the BLUF, Lunala is thankfully far less likely than Solgaleo to get skunked in terms of fast moves. It COULD still get a stinker like Charge Beam or Hidden Power, but it’s VERY unlikely to get both. (No Niantic, you don’t have to consider that a challenge to accept!) The worst it has beyond those is Air Slash, which is at least okay-ish. But everything else is aces with four STAB moves: Psycho Cut, Hex, Confusion, and the ultimate dream, the mighty Shadow Claw.

The charge moves, as with Solgaleo, are wide and varied, with fluff like Ice Beam, Thunderbolt, Focus Blast, Aerial Ace, and Giga Impact, but also some very promising things like Shadow Ball, Psyshock, Moonblast (that one has to be almost a shoo-in, right? right?), Icy Wind, Fly, and Sky Attack. With a move like Hex or Psycho Cut and a couple of those better moves, Lunala looks meta. But with Psyshock in particular, both Confusion and Psycho Cut start to have some serious potential (particularly with Shadow Ball also in the picture).

But if Lunala happens to hit the jackpot with Shadow Claw… well, look out! 😱 Now it wouldn’t even need something baity like Psyshock, and can just load up with bombs like Shadow Ball and Moonblast (or even some less-ideal options) and absolutely rake against basically anything but Darks, Mewtwo, Snorlax, the Giratinas, Gyarados, and sometimes stuff like Ho-Oh, Dialga, Zekrom and one or two others here and there. But in short, it becomes a BEAST that would definitely be worth a heavy grind… if a grind for Lunala and Solgaleo is even possible. Will all depend on how we collect the Cosmogs and Cosmoems that eventually evolve into the Legendary pair.

So gimme the lowdown, JRE!

In short, here’s what you’re looking for whenever these come out:

Alright, that’s all I got for today. I know I’ve been pretty quiet lately (it’s been over a week since my last article!), but I’ve been trying to do something I never do — REST! — while waiting all the news to come. Hopefully that data dump comes soon! I’m getting VERY antsy.

Until next time, for more PvP tidbits, you can find me on Twitter or Patreon. Or please feel free to comment here with your own thoughts or questions and I’ll get back to you as soon as I can!